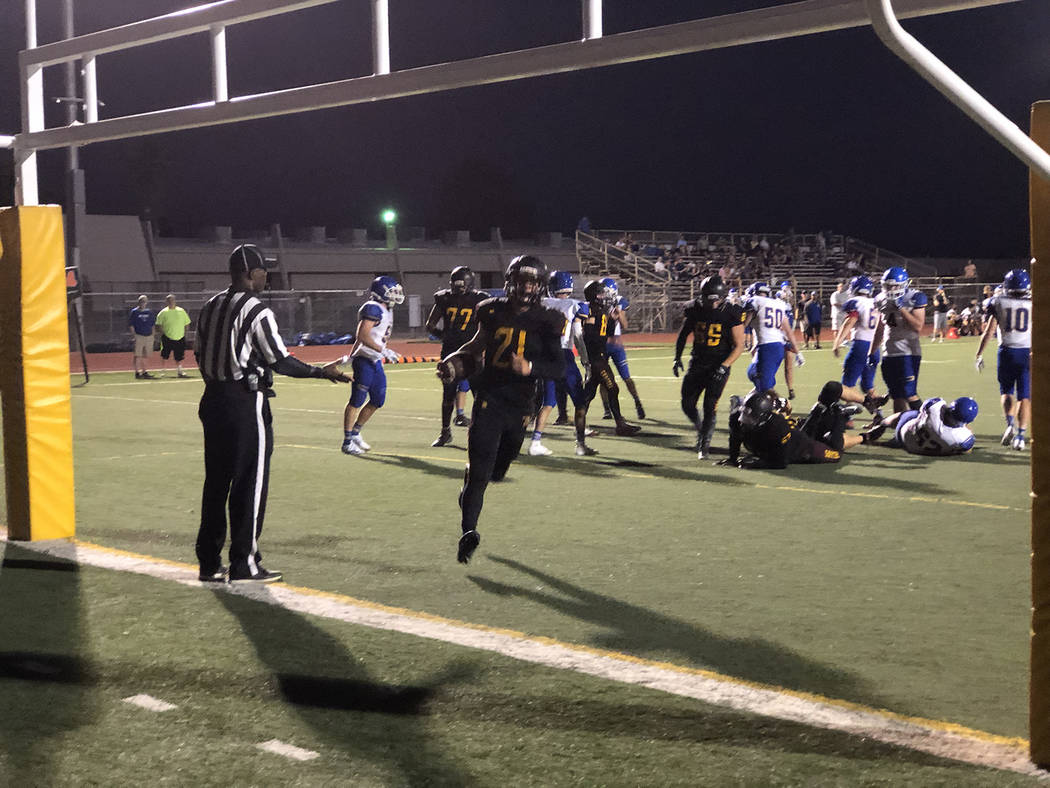 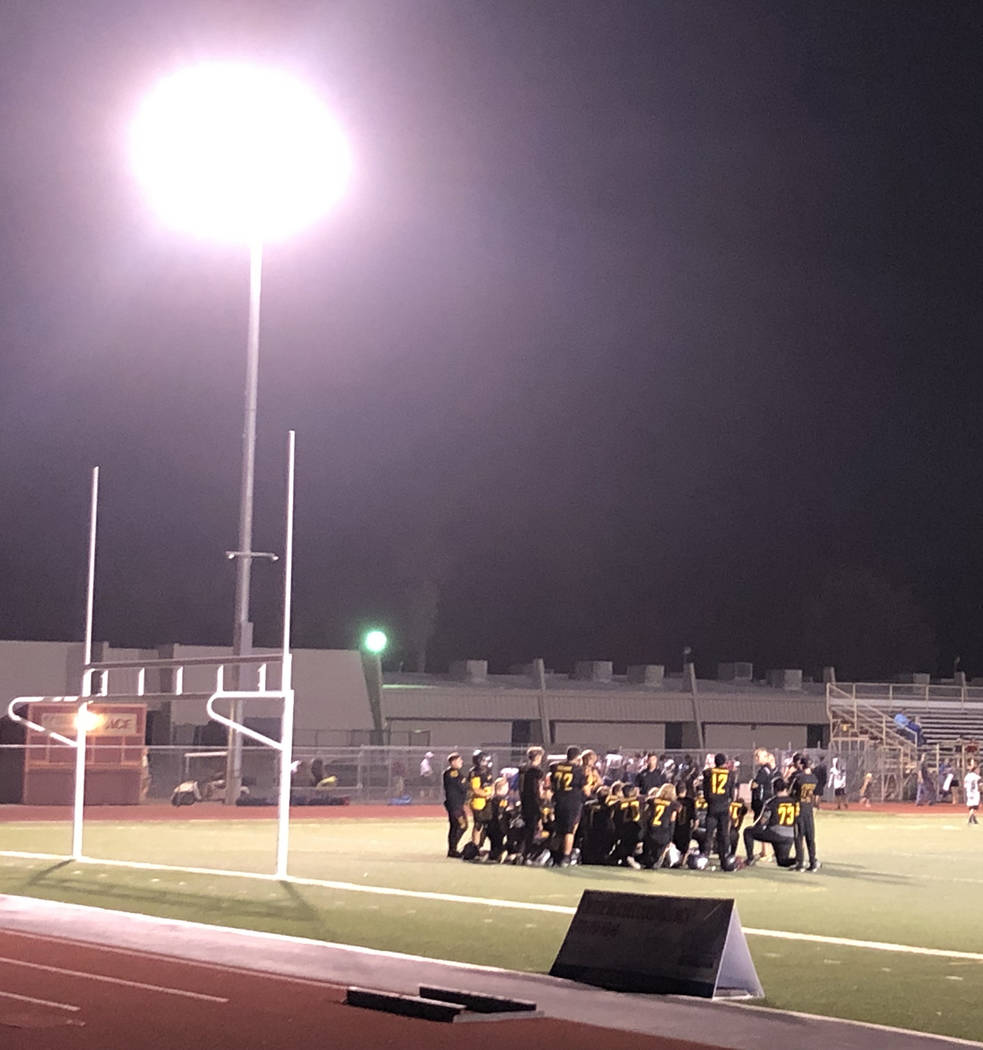 Tom Rysinski/Pahrump Valley Times Pahrump Valley High School football players gather with their coaches after the Trojans blew a 42-13 third-quarter lead in a 46-42 loss to Lowry on Friday night in Pahrump.

The feeling started late in third quarter on the Pahrump Valley sideline, not quite impending doom but more of an alarm going off inside the heads of the coaching staff.

It happened again. Oh boy, did it happen.

For the second year in a row, the Trojans football team built a big lead against Lowry only to lose in the end. This time, the Buckaroos scored 33 consecutive points, the last six with 22.6 seconds left in the game, to post a 46-42 victory Friday night at Trojan Field.

“It was heartbreaking, absolutely heartbreaking,” said Pahrump Valley coach Joe Clayton, who is now 3-4 in openers. “And by far one of the most painful losses I’ve ever had, and I’m sure I’m not alone.”

Everything was going well for the Trojans until midway through the third quarter. Junior Tony Margiotta was the workhorse Clayton had envisioned, rushing 21 times for 126 yards and two touchdowns, catching a 30-yard touchdown pass from Dylan Wright, returning five kickoffs for 76 yards and running for all five 2-point conversions.

Classmate Andrew Avena was also effective, with 12 carries for 97 yards and scoring twice as the Trojans totaled 330 yards on the ground. Avena’s second touchdown pushed the Pahrump Valley lead to 42-13 with 6:14 to go in the third quarter, leaving the Trojans just 17 minutes, 46 seconds to hold a 29-point lead. For a team that chews up the clock in giant chunks, it was game over, right?

Wrong. From there, it was all Buckaroos, who scored 33 consecutive points during that 17:46 to steal the win. Big plays, a key turnover and Lowry’s defense twice preventing the Trojans from running the clock combined for a stunning result.

Pass defense, Pahrump Valley’s Achilles’ heel during the first part of last season, was an issue again Friday night. Lowry starter Chance Huitt misfired on his first six passes and finished just 4 of 13, but he threw for touchdowns of 75, 57 and 26 yards. Another pass went for 38 yards plus a roughing-the-passer penalty on a third-and-13 play that helped the Buckaroos get the first of their five consecutive touchdowns.

But the final back-breaking big play was a run. After the Buckaroos took over on downs at their own 26 with 1:56 left and trailing by two, Anthony Peterson broke off a 50-yard run to start the game-winning drive.

Preston Snow’s 17-yard run followed to put Lowry in field goal range, and short runs by Peterson and Huitt landed the Buckaroos in the end zone with 22.6 seconds left.

In between those two touchdowns was a 70-yard fumble return for a score, a 57-yard pass from Huitt to Kevin Warren on the first play after the Trojans’ only punt of the game, and a six-play, 50-yard drive after a successful onside kick that ended when Huitt found Tyler Neu for a 26-yard score.

The punt and Lowry holding the Trojans on downs with 2 minutes to go were tough to watch from the sidelines, as Pahrump Valley coaches are used to long, sustained drives that put a stake in the heart of opposing defenses. To give up possession twice and lose the ball on a fumble returned for a touchdown on the possession before that was a strange and somewhat humbling experience.

“It doesn’t add up, especially with what we do,” Clayton said. “Had we got that first down, we probably would’ve gone right down and scored and that would have been it.”

But they didn’t, and it wasn’t, and the Trojans were left wondering how this could happen two years in a row. Last season, the lead was 32-13 and the final score 41-40, with Snow catching a 5-yard touchdown pass from Brendan Domire with 26.3 seconds left.

Clayton said this year was worse because the game was at home, and he and the coaching staff believed his players were prepared well for the game. Those players were back at practice Monday with a positive attitude, he said.

“They weren’t bad,” Clayton said, choosing his words carefully. “They know. They’re confident. They’re disturbed by it, obviously, just like we were, but they know it’s one thing if you get your butt kicked by 50 and you can’t compete with the team you’re playing with, but they did more than compete.

“Our defense, obviously we’re going to talk about competing a bit for a couple of spots. Other than that, it was our mental toughness. We got exhausted and made too many mistakes in the second half.”

The Trojans will try and get back on track Friday night with a 7 p.m. game against Virgin Valley (1-0) in Mesquite.