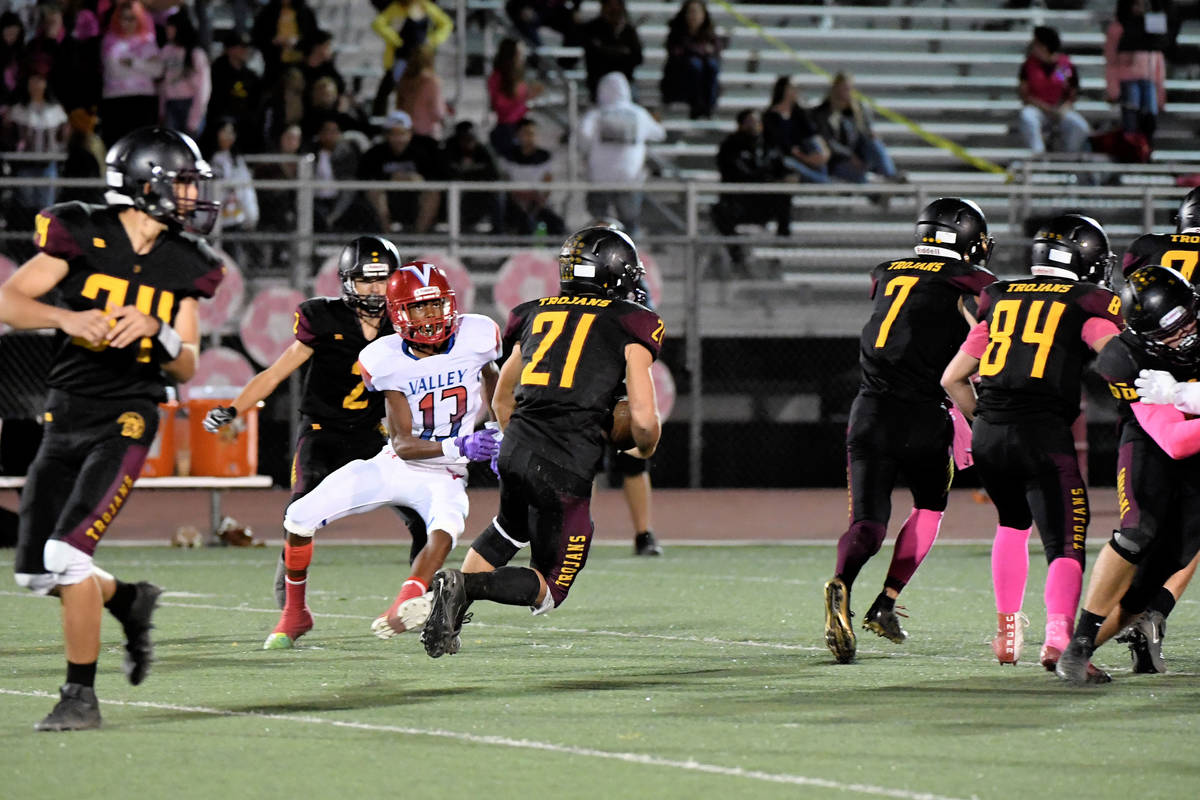 Peter Davis/Pahrump Valley Times file Tony Margiotta scampers for some of his 96 yards during last year's 44-36 win over Valley that locked up a postseason berth for Pahrump Valley. The teams are slated to meet again Sept. 11 in Las Vegas. 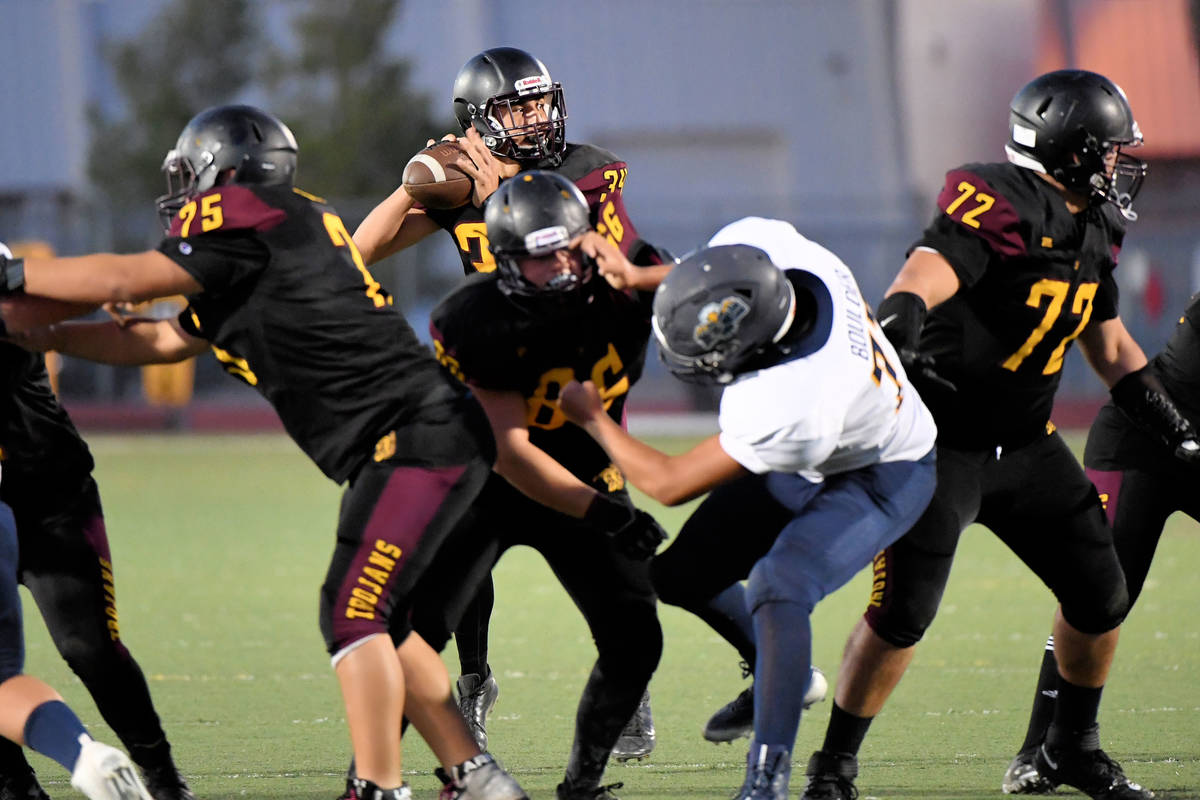 Peter Davis/Pahrump Valley Times PVHS quarterback Roman Roberts looks for a receiver during last year's game against Boulder City. The past three meetings between the Trojans and Eagles have been decided by a combined 8 points; they are scheduled to close the regular season Oct. 23 in Boulder City. 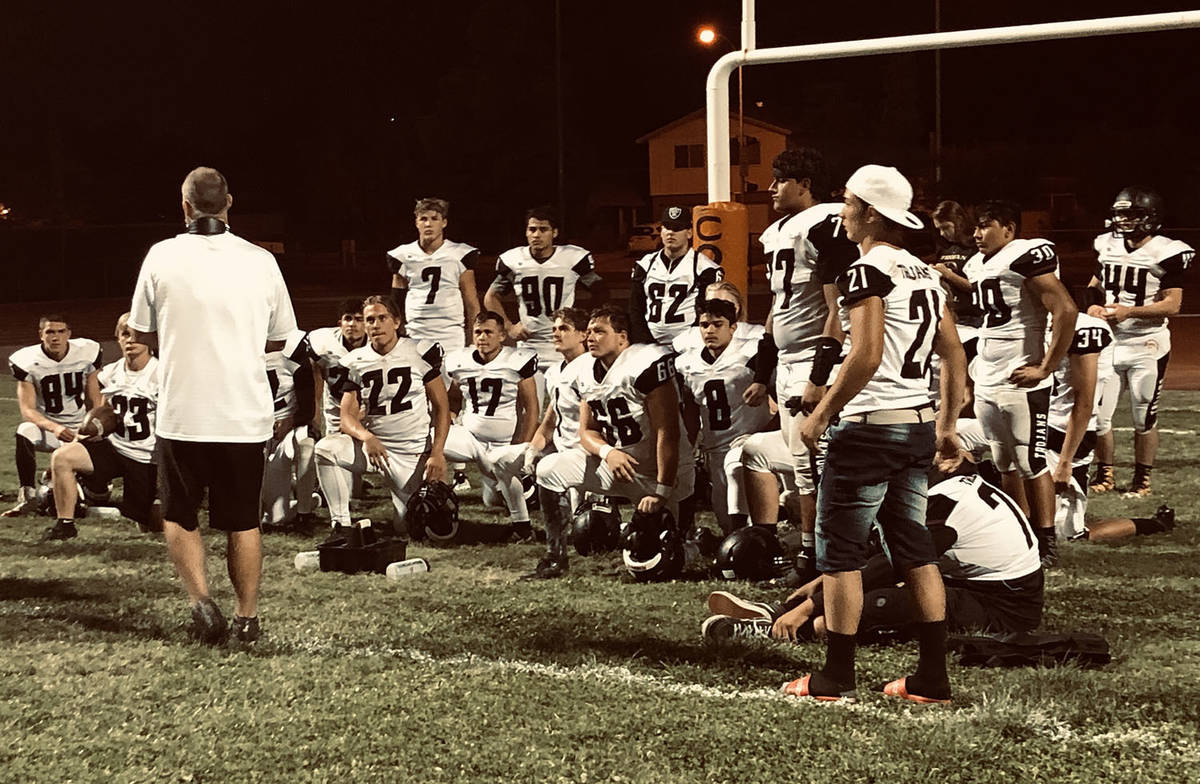 Tom Rysinski/Pahrump Valley Times file Pahrump Valley football coach Joe Clayton talks to his team after a 32-14 win over SLAM Academy last season. The Bulls will be the Trojans' opening opponent this year, with the teams scheduled to meet Aug. 21 in Pahrump.

An eight-game league schedule and only one nonleague game mark the most obvious changes from last year on the Pahrump Valley High School football team’s 2020 schedule.

Assuming schools open on time, here’s a way-too-early glance at the Trojans 2020 schedule.

The Bulls still look like the young program they are, entering just their second season playing a Class 3A schedule. Wins last year came against Class 2A Calvary Chapel Christian, California’s Silver Valley High School and Rancho, a 4A school by enrollment that went 1-9 in the 3A Sunrise League. The Bulls’ junior varsity posted a winning record but was outscored 121-112 in the process. There were only eight seniors on the 53-man roster last fall, but one of them, Isaiah Golden, was SLAM’s second-leading rusher and scampered for 96 yards on just 11 carries in that loss to the Trojans. Not to overlook the Bulls, but this is a much easier opener than the past two seasons, when Pahrump Valley took on Lowry and suffered two losses by a combined 5 points as both teams scored at least 40 points each year. That is unlikely to happen against SLAM.

The Bulldogs were a quality team a year ago, losing only to 4A Cimarron-Memorial until the second round of the playoffs where, after rolling past Moapa Valley 42-20 in the postseason opener, they were pounded 47-14 by Churchill County. That 20-0 score against the Trojans is a bit deceiving; the game was a street fight, although Virgin Valley’s defense held Pahrump Valley to just 122 yards of offense while the Bulldogs totaled 222 yards. But the Bulldogs graduated a ton of seniors from that 9-2 team, and the junior varsity went just 3-3-1. Still, Virgin Valley is always a tough opponent for Pahrump Valley; the Bulldogs have won seven consecutive games against the Trojans since a 39-33 overtime win for PVHS in 2005.

Welcome to the only nonleague game of the year for Pahrump Valley football. The Trailblazers are in the realigned 4A Mountain League, although their schedule will look familiar to Trojan fans; Durango will face Western, Mojave, Sunrise Mountain and Del Sol this fall. Last year, the Trailblazers counted Bishop Gorman, Palo Verde and Green Valley (twice) among their losses, so they know what it’s like to be put through the wringer. Their top passer and rusher both graduated, but the Trojans will be hard-pressed not to be worn down by the Trailblazers; last year, their roster numbered 51 players, while Pahrump Valley began last season with just 23 on varsity.

Do the Vikings have a home field yet? Last summer, theirs was one of three ruled unplayable — and it looked unplayable the year before when the Trojans rallied for a season-ending win that clinched an unbeaten Sunset League campaign. With the NIAA realigning sport by sport, the only Las Vegas behemoths in Class 3A will be those at the bottom of the rubric points pile in football among 4A/5A schools. The Vikings are one of those teams, and if past history is any indication, that’s a good thing for football fans. The Vikings and Trojans have played very entertaining — and meaningful — games the past two years, with the Trojans taking a must-win game last year to earn a playoff spot. Valley graduated multi-talented quarterback Jarrett Zibert, who passed for 194 yards and rushed for 120 against Pahrump Valley last year. This year’s Valley squad won’t have much experience, losing 23 seniors from a roster that was not that deep.

What is there to say about the Warriors’ football program? Nothing good. Barring a change of coaches or a massive infusion of players who actually care, Western is the kind of foe you try out new things against, or maybe get in some players who aren’t ready for prime time. It’s that bad. Consider the scores from the past few seasons when Pahrump Valley has played Western, in reverse order: 37-0, 66-0, 40-6, 35-12, 63-18, 61-14, 60-0 and 21-8 since Western’s last win in the series, 13-7 over a 1-8 Pahrump Valley team in 2011. And remember, except for 2016 and 2018, the Trojan teams that administered those beatings finished under .500. Last year, the “Warriors” were outscored 310-35, including 177-0 in league games. No need to check who graduated or who Western’s top returning player might be; put 11 healthy bodies on the field, then name the score. (But don’t let the players see that.)

Welcome back, Sundevils. We missed you on the PVHS schedule. Actually, that 2016 game is the only time in the past decade the teams have met, but now Eldorado is in Class 3A South, for some sports anyway. Eldorado moves to 3A after a sub-.500 season in the 4A Southern Region’s worst league a year ago. The Sundevils allowed almost 47 points per game, but they were a young team. Only four seniors were on the 2019 Eldorado roster that managed to defeat only Mojave on the field; the Sundevils won a forfeited game from Canyon Springs for their second win. (On the field, Canyon Springs rolled 48-7.) One possible thing in Eldorado’s favor against what was a thin Pahrump Valley squad last year: The Sundevils counted 40 players on the roster.

The Pirates did not look like a team that brought a 6-4 record into the playoffs in Pahrump last year. The Trojans won’t have to dig very deep to find motivation against a team that simply overwhelmed them. as the Pirates averaged almost 9 yards per play in a game that featured a running clock for the entire second half. Gone from that team are 1,000-yard rusher Hayden Redd and Russell Bodily, who averaged 6.0 yards per carry, but the Pirates always have players. In fact, the next six top rushers on last year’s team were sophomores and juniors. Cameron Reese, a solid if unspectacular quarterback who threw for 115 yards per game, should be back for his senior season, and top receiver Austin Heiselbetz is a classmate. But four of the team’s top five tacklers and the top four sack leaders graduated from a defense that allowed barely 13 points per game.

The Rams are not that far removed from a 19-game losing streak, as they went from Oct. 23, 2015 to Aug. 24, 2018 without a victory. And who did they end that skid against? Oh, just take a guess. Yes, you got it: Western. That would be the same “Warriors” team that provided Rancho with its only victory last year, a 31-0 drubbing on opening night. Other than that, the Rams had it tough in 2019, getting outscored 278-76. Ten seniors graduated from a Rancho team that suffered a 50-point loss to Virgin Valley and a 39-point loss to Boulder City. The offense was little better, never scoring more than 17 points after the opener against Western and getting shut out twice. The Trojans will have played eight consecutive weeks at this point, so a weaker foe might be just what they need after what figures to be a bruising battle with Moapa Valley.

Sometimes, you just don’t have to say much. It’s Boulder City. Historically, the Eagles have dominated this rivalry, but in the past 16 years the teams have split 10 meetings. Moreover, the past three have been dramatic. First came a very frustrating 32-28 Pahrump Valley loss that sent the Trojans to 1-3 two years ago before they went on a six-game roll and won the Sunset League. That was followed by a very well-played playoff game in Pahrump, won 32-30 by the Trojans. And last year’s 20-18 Eagles win in double overtime was marred by bizarre officiating that left both teams scratching their heads, when they weren’t shouting at the zebras. Make this one the last game of the regular season, and it just gets better. The teams could be playing for playoff seeding, a home playoff game or even a playoff spot. That would be fun. Only five seniors graduated from the Eagles’ 2019 team, but one was two-year starting quarterback Parker Reynolds, who threw for 210 yards and two scores in the win over Pahrump Valley last season. Another was leading rusher Devon Walker, who was held in check by the Trojans but ran for 837 yards. But if the Eagles have a quarterback — rising senior Dakota Christian has the most game experience — their top six receivers a year ago were all juniors. As a team, Boulder City threw for 1,637 yards and rushed for 1,263, so the contrast in styles just adds another layer of interest to the Eagles-Trojans contest.