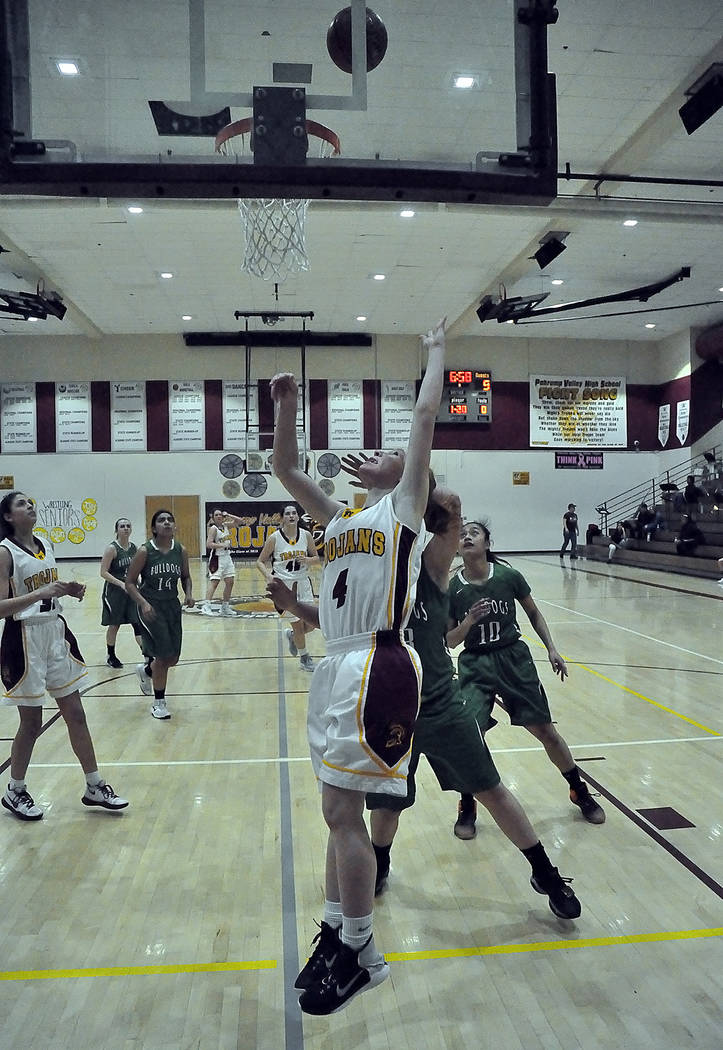 Horace Langford Jr./Pahrump Valley Times Sophomore guard Makayla Gent drives in for a layup Tuesday night for 2 of her 10 points in Pahrump Valley's 47-26 win over Virgin Valley in the Class 3A Southern Region playoffs. 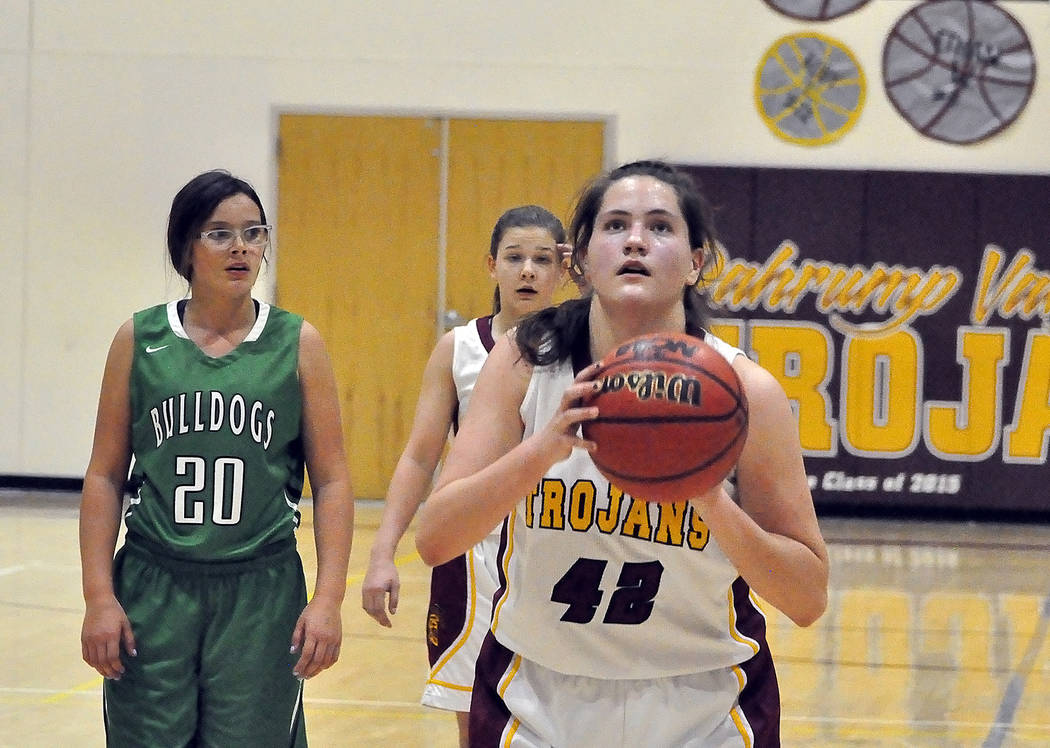 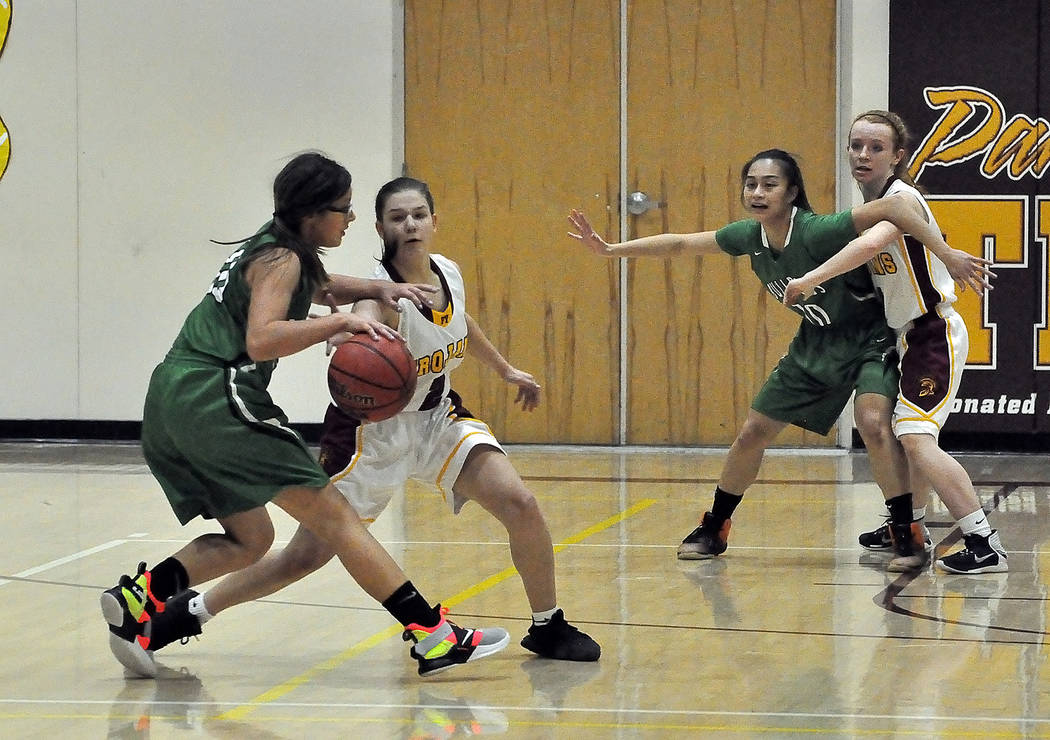 The Pahrump Valley High School girls basketball team was at its best and at its worst Tuesday night.

Facing Virgin Valley in the opening round of the Class 3A Southern Region Tournament, the Trojans went 6 minutes, 20 seconds without scoring, were held to 5 points during the second quarter and continually missed layups, many uncontested.

That last issue has been a recurring one this season, and when Adison Snyder drained a second-quarter 3-pointer for the Bulldogs, Pahrump Valley coach Bob Hopkins yelled out in frustration, “They hit a 3, and we can’t even make a layup!”

That was because the Trojans at their best were utterly dominant early and late in their 47-26 home victory. They played the best eight minutes of basketball seen in Pahrump all year, pressing the Bulldogs into mistake after mistake and converting steals and turnovers into easy baskets. With freshman guard Tayla Wombaker scoring 9 points and sophomore guard Makayla Gent adding 6, the Trojans raced to a 17-0 lead after one quarter and scored the game’s first 21 points.

“We came out and played real well the first quarter, and then we didn’t play with the same intensity the whole rest of the game,” Hopkins said. “We had a little spurt there in the fourth quarter when we got it going again, but the second and third were kind of ugly.”

But that first quarter was so complete, so thoroughly demoralizing to the Bulldogs that the malaise that overtook the game during the middle periods had little impact. Just in the first two minutes, Wombaker put in a layup on a third-chance bucket, Gent had a layup on a 2-on-1 fast break, Wombaker scored off of a steal on the press and then, after another steal off of the press, nailed a 3-pointer that made it 9-0 and led to a Virgin Valley timeout with 6:03 left in the opening quarter.

That did little to stop the Trojans, and even Hopkins’ mass substitutions with more than three minutes left in the period didn’t help the Bulldogs. Virgin Valley did not get on the scoreboard until the 6:19 mark of the second, when Alexis Boatwright — the only player who gave the Trojans any real trouble — hit a free throw to make it 21-1. Boatwright would finish with game highs of 14 points and 10 rebounds.

It was a far cry from last year, when the Trojans were the top seed out of the Sunset League and lost their tournament opener at home to Chaparral, the fourth seed from the Sunrise. Hopkins wasn’t shy about reminding his players of that frustrating loss.

“I mentioned it before we came out. I mentioned it at halftime,” he said. “When you are up 21-1 or something, and then it’s 22-9 … we had a chance to completely put them away but then we gave them hope.

“I think when you’re real good you put that away. We’re getting better, and hopefully we’ll play a full game one of these days.”

Hope was about all the Bulldogs had, but for a brief moment it was real. A Boatwright turnaround jumper from 8 feet out pulled Virgin Valley within 10 at 34-24 with 6:32 to go, but that was as close as the Bulldogs would get. A Gent layup off of a nice pass from Wombaker, a Jackie Stobbe bucket off of a steal and an 8-footer from Nicky Velazquez made it 40-24, and the Trojans coasted home.

Sophomore forward Kate Daffer took over the scoring load for the Trojans after halftime, scoring 8 of her team’s 12 points during the third quarter and finishing with a team-high 12. Wombaker finished with 11 points, while Gent wound up with 10.

The balanced Trojans out-rebounded the Bulldogs 31-23, led by 6 from Wombaker and 5 by Daffer. Pahrump Valley pulled down 12 offensive rebounds to just 5 for Virgin Valley. Jackie Stobbe led the Trojans with 5 assists, while Wombaker totaled 4.

The winners will meet at 4 p.m. Saturday at Del Sol for the region championship.