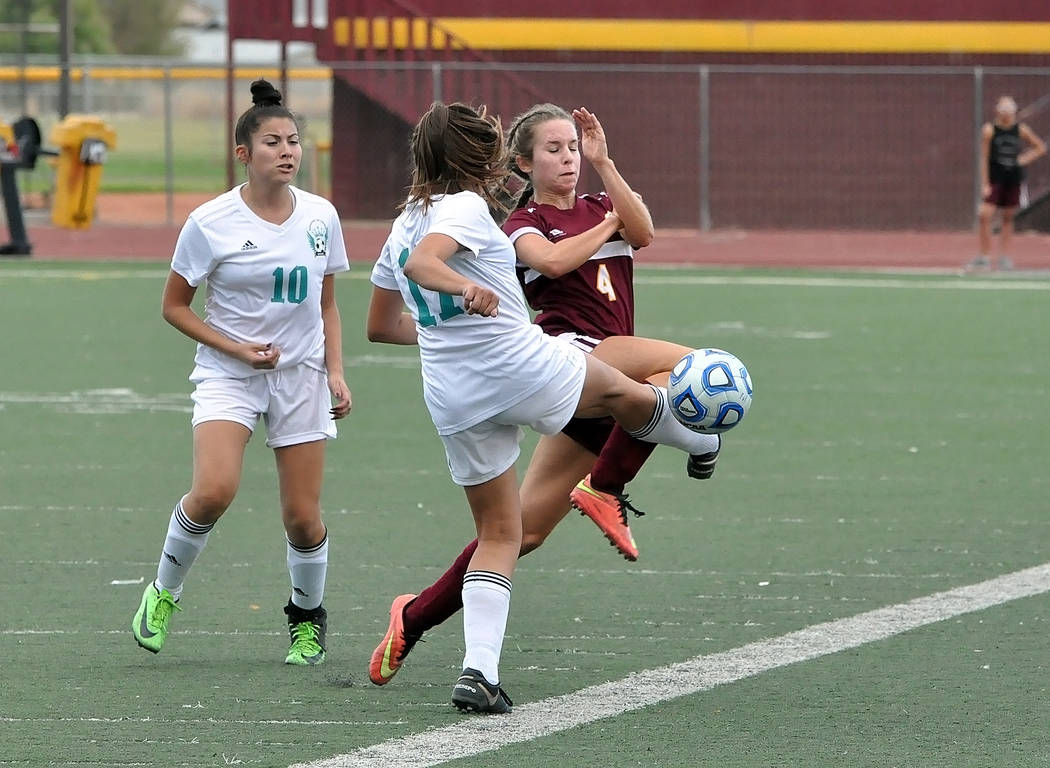 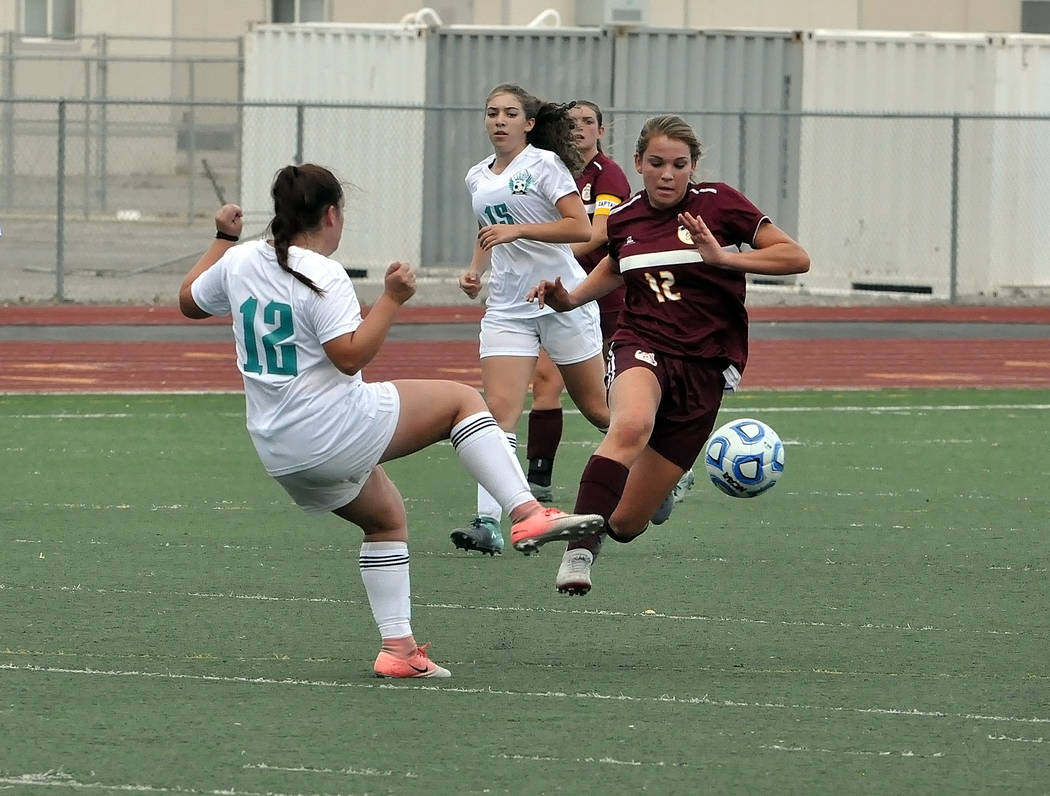 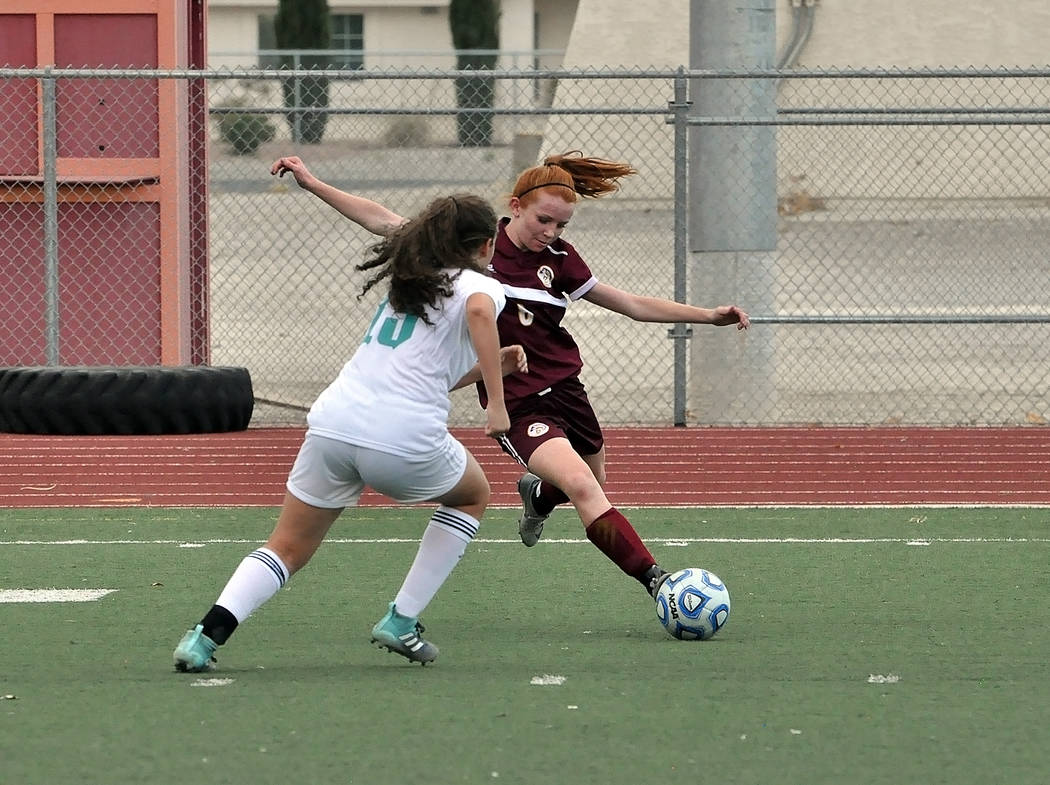 Sophomore Makayla Gent and senior Kimberly Ramos each posted a hat trick Monday as the Trojans rolled to an 8-0 home win over SLAM Academy, their fourth consecutive victory.

The Trojans are playing like an experienced team, not a group that watched 52 goals, 28 assists and 13.5 shutouts walk off with diplomas last spring.

“The seniors definitely helped us in their last year, teaching us leadership roles,” senior Grace Gundacker said. “It’s just passing on tradition, helping each other as a team. There’s not just one person that’s going to lead the team. It’s everybody leading together.”

Gent, who scored the game’s first three goals, and Gundacker each contributed two assists, while Stephanie Frias-Esparza had a goal and an assist. Alexis Sandoval rounded out the scoring, while Raelean Sutton made two saves.

Gent’s first goal ricocheted off the far post and bounced off of the near post before finding pay dirt about seven minutes in; she turned a battle for the ball into a sudden breakaway for her second one in the 19th minute; and her third came off of a solid cross from Gundacker, who made one of her several brilliant runs to set it up less than two minutes later.

The duo always seemed to be on the same page.

“Grace and I run track together and have done many different sports together,” Gent said. “It’s almost like we can read each other’s minds. We’re just so in sync with each other, we’re just able to pass and score. It’s awesome.”

“Those two were just on point today,” fifth-year Pahrump Valley coach Julie Carrington said. “When we tell them to go wide and they’ve got to tuck into the poles, you have to know when to do that and you have to know when your teammates are going to be going at the same time. To get that togetherness is one of my favorite parts of the whole game.

“I loved how they were just on point where they should be at that position on the far post and the near post. And then my striker and my attacking and holding mids, everybody was just on top of their game today. I was very proud.”

Any team that has all position groups working that well together is tough to beat, and the Trojans know it.

“I’d like to believe that’s our fabulous coaching,” Carrington said with a laugh. “We work really hard at our coaching. But it just takes very willing girls to be able to do it. It’s a very coachable team.”

And one that has seen players step up to fill the holes left by graduation. Ramos is an excellent example of that; the senior did not score a goal last season and registered just one assist, but in addition to her Monday hat trick, she scored twice in a 9-0 win over Mojave, three in a 6-1 victory over Sky Pointe and once more in a 2-0 win over Western, a team Carrington cites as the biggest threat in the Sunset League.

The Western game, in the Las Vegas Kick-Off, provided the only test of the winning streak for goalkeeper Raelean Sutton, who made 11 saves. She only needed to make two to earn the shutout against SLAM Academy, a charter school opened in 2016 by rapper Pitbull in its second year as a varsity program playing an independent schedule.

The Bulls were clearly outmanned against the Trojans, which allowed Carrington to get more players into the game. And while she had high praise for pretty much everybody, she did have a few extra words about her midfield.

“My holding mids just held that line,” she said. “They always say you win or lose it in the midfield, and they just held it. They worked so well off of each other — Kaylee Vega, Kaylee Mendoza — that helped my forwards and kept my defensive line up where they needed to go.”

Sophomore Madelyn Souza has taken her turn as a big gun, scoring three times in the win over Sky Pointe and netting one of the two goals against Western. Against Mojave, Gundacker scored three times and Gent connected twice, while six Trojans added assists.

“The freshmen coming up have definitely stepped up, and they’re playing amazing,” Gent said. “And the older girls who are stepping up like Maddie Souza, Grace, Kaylee, all the girls have been doing amazing things, taking leadership roles on our team.”

There are far more difficult tests ahead, but the players who returned from a trip to the state tournament in 2017 are well aware of that, according to their coach.

“They’ve worked hard to get where they’re at,” Carrington said. “They know what it takes to get there, and they know we have harder teams coming up.”

Gundacker believes they are well-prepared for any such tests.

“Today showed how everyone is in position, how we make those plays with crossing and passing,” she said. “We look for those open spaces, we try and make our passes more accurate and paced. Most of our practices are based on that. What you get out of practice is what you’re going to put into the game.”