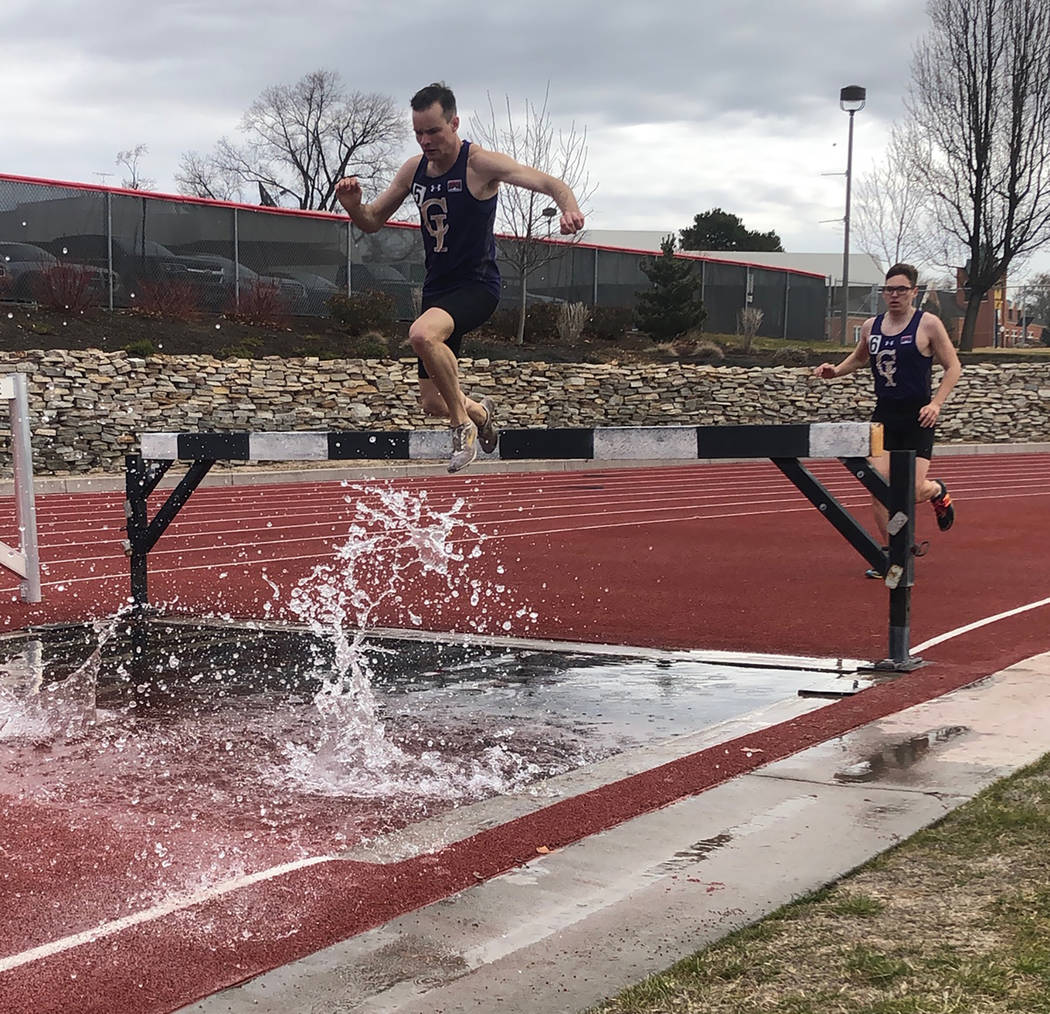 Special to the Pahrump Valley Times Pahrump Valley High School graduate Bryce Odegard competed three times in the steeplechase this spring for the College of Idaho before finishing third in that event at the conference championship meet. 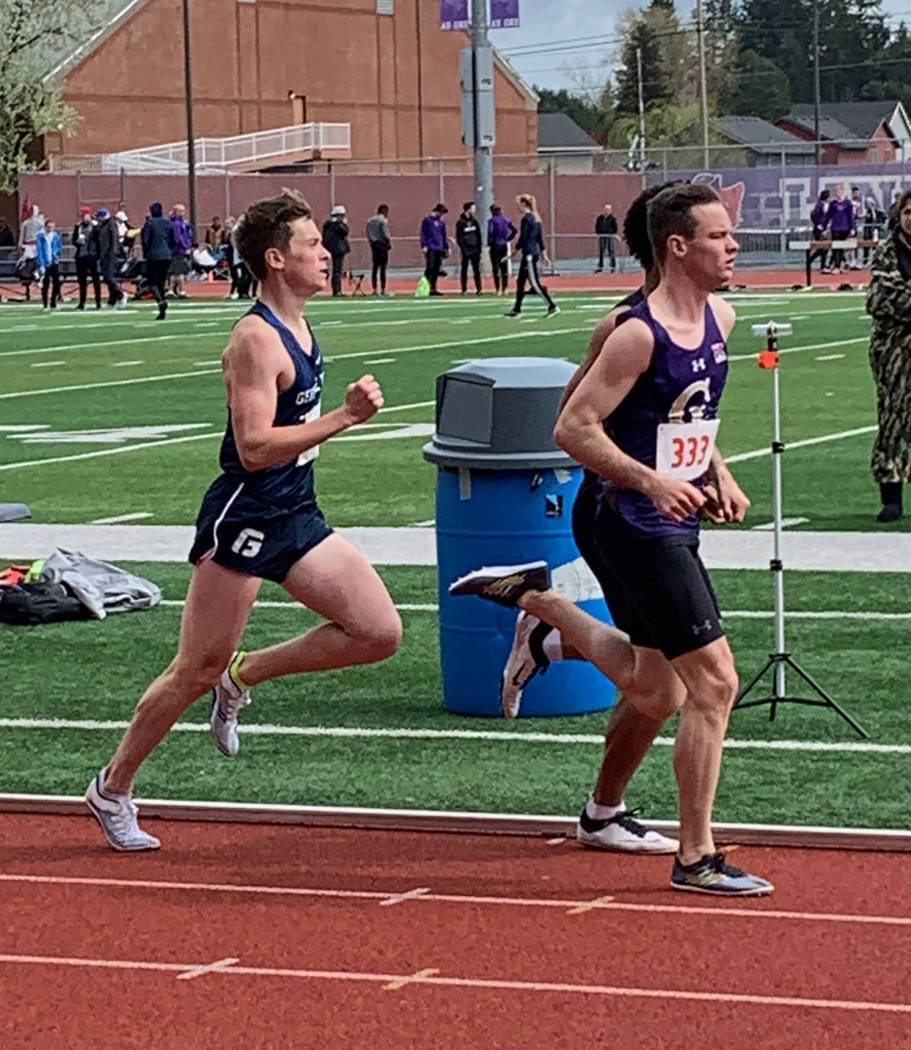 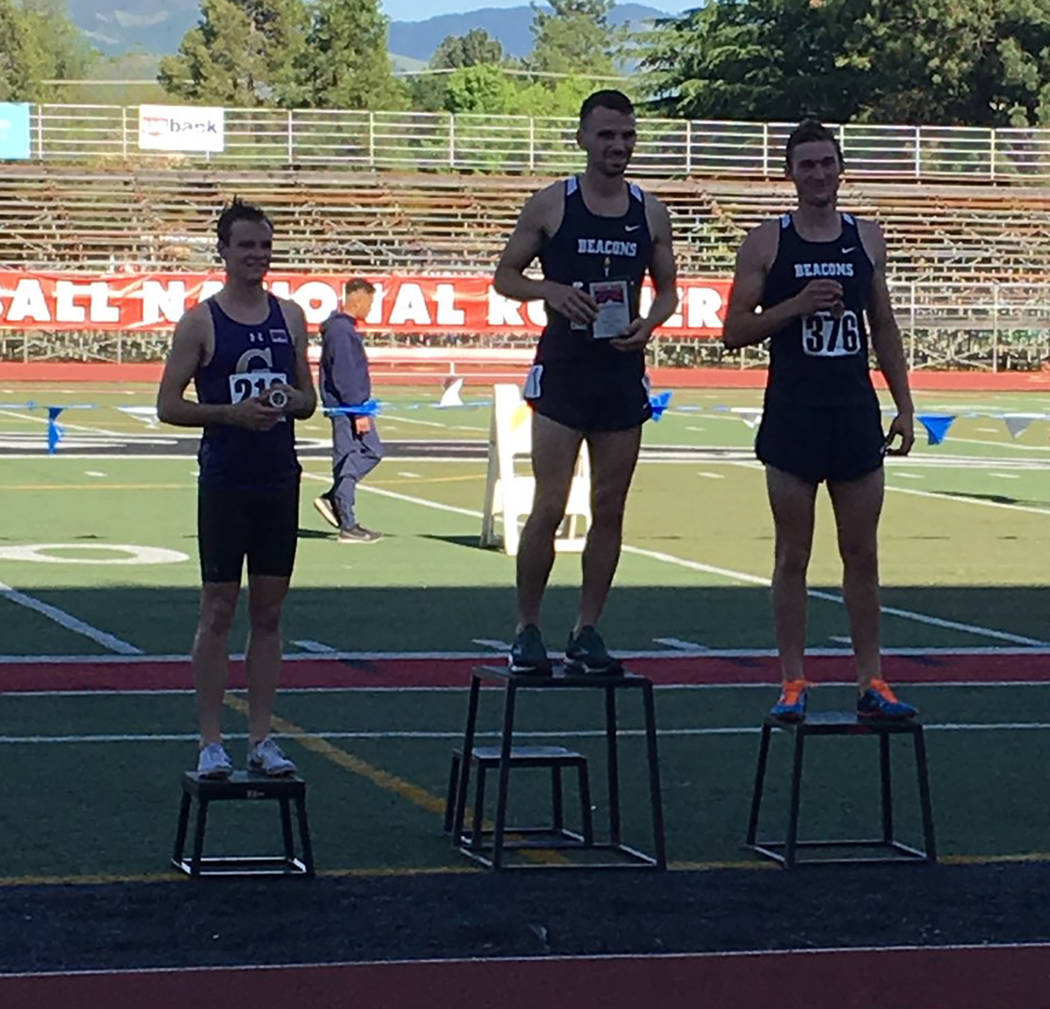 Special to the Pahrump Valley Times Bryce Odegard, left, accepts his medal after finishing third in the 3,000-meter steeplechase at the Cascade Conference Championships in Ashland, Oregon. 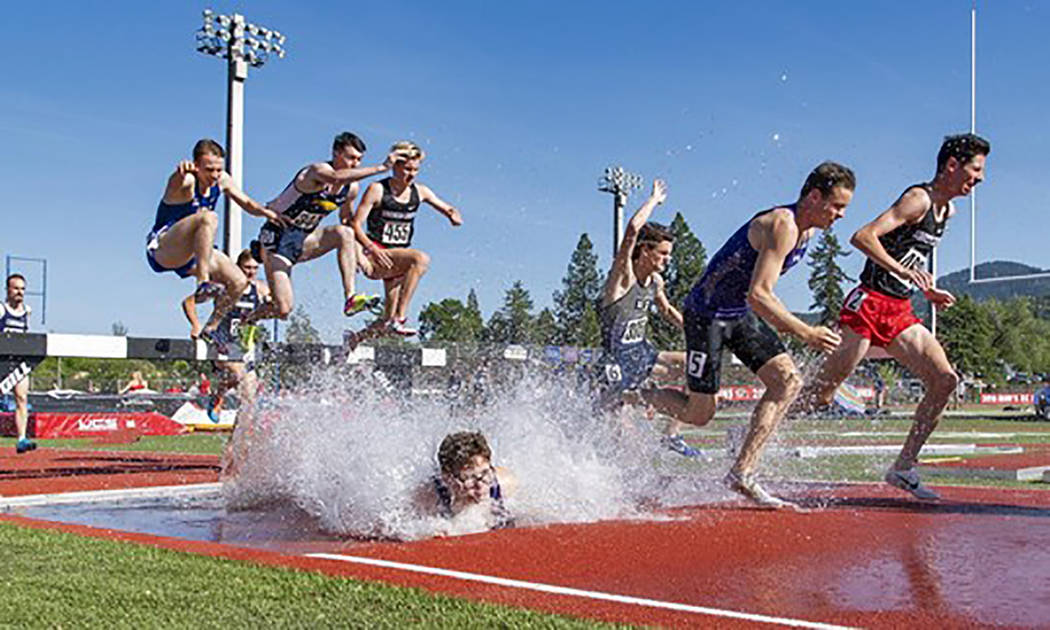 Special to the Pahrump Valley Times College of Idaho's Bryce Odegard, second from right, handles a water hazard better than some of his competitors at the Cascade Conference Championships on May 10 in Ashland, Oregon.

Bryce Odegard might be spending the summer working at his grandparents’ feed store, coping with the loneliness of a goat when two other goats get sold, but his mind is already on the trails.

“I’m ready to start running cross-country races right now,” said Odegard, who recently completed his freshman year at the College of Idaho, running track and field and cross country for the Yotes.

The 2018 Pahrump Valley High School graduate already has enjoyed some success at the College of Idaho, qualifying for the National Association of Intercollegiate Athletics championships with the school’s 4 x 800-meter relay team and placing third in the Cascade Conference Championships in the 3,000-meter steeplechase.

Odegard cites the latter as the high point of his freshman year.

“Getting all-conference in steeple, just because I went in ranked fifth and didn’t really let it affect me mentally and just went out there and raced how everyone else was going to race,” he said. “That was the highlight of the season.”

Odegard’s third-place time of 9 minutes, 47.48 seconds, just 12 seconds off of first place, was worth 6 team points for the Yotes, who finished second out of 11 teams in the conference championships, trailing only Southern Oregon.

“We’ve been thrilled to work with Bryce,” said Austin Basterrechea, who coaches track and cross country at the college. “He is one of a handful of freshmen who was able to compete at two national meets for us this season.”

Things didn’t go quite as well at the NAIA Championships in Gulf Shores, Alabama.

“I run the 4 x 8, and in the prelims our first leg popped his hamstring, so that kind of set us back,” Odegard said. “We were just kind of happy we were there.”

The Yotes also were there during cross-country season. First, they won the Cascade Conference meet, as Odegard placed seventh on the 8,000-meter course in 25:25.40. The depth of the Yotes was evident; his seventh-place finish was fourth on his own team.

“Bryce was a key factor in our men’s team securing its first-ever conference title in cross country,” Basterrechea said.

They performed well again at nationals in Cedar Rapids, Iowa, placing seventh among 36 teams. Odegard placed 96th, running in 25:40.9, again fourth among College of Idaho runners, as four of the Yotes’ five scoring runners placed in the top 100.

Yet, Odegard said his indoor season was his best.

“Indoor track, that’s the only season I didn’t go to nationals,” he said. “We just barely missed getting to go to the national meet in the (distance medley relay). But I was surprised at how well I was racing indoors, so I’d say that was probably my best.”

The success was especially satisfying after Odegard’s collegiate career got off to a slow start.

“Last summer I got injured right away, and that took a month out of my training,” he said. “Hopefully, I’ll get that month back and go in a little fitter than I did my freshman year.

“I’ll also be running more miles. I think just following the program will enable me to see improvement this year. Our program always talks about the sophomore jump because our freshmen are usually pretty contained mileage-wise, and then sophomore year they take us off our leash a little bit and let us do a little more.”

Sports seasons are longer in college than in high school, but that doesn’t bother Odegard.

“We get little breaks between our racing periods, and by the time those breaks are over we’re ready to start racing again,” he said. “It’s not as much fun to train when you’re not training to race. We’re always looking forward to the next race. The excitement of getting to race keeps us going.”

Training and racing with this group of Yotes is special to Odegard, who clearly has found a home in Caldwell, Idaho.

“You hang out with people and you get sick of them, but I’ve never had that feeling with them. It’s something else.”

The business major — “I’ve changed three or four times,” he says — is looking forward to doing better this year in the classroom at the College of Idaho, which, at 960 students is significantly smaller than Pahrump Valley High School.

“School’s good,” Odegard said. “It could have gone better, but it’s almost like my freshman year was a rust-buster, had to feel how it was going to be. I think next year I’ll be more comfortable, and I’ll do a lot better.”

He feels the same way about his athletic pursuits.

“I kind of feel like I could have run a little faster in a couple of my events,” he said. “We don’t race as much in college because it’s so much more taxing. And we ended up focusing so hard on steeple, then in the 1,500 and 800 I didn’t have the opportunity to race very much.”

“The Boise area is amazing,” he said of the state capital 20 minutes away from campus. “It’s a big city, but you go there and it feels like the outskirts of Vegas. It feels more like a town.”

As Basterrechea put it, “We think we’re just scratching the surface on what Bryce is capable of, and we’re looking forward to the next three years.”