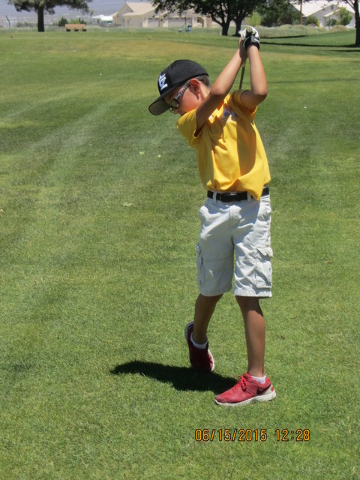 In the boys high school, Derek Moore shot a 66 for the win.

The Monday tournaments will run until Aug. 2, which is the last tournament of the summer. Pahrump Valley Golf is still taking registration for these tournaments. The cost is $5 a tournament with a one-time $20 junior golf registration fee. The golf action starts at 12 noon.

“This week we had three new registrations and I think four more will join us on Monday,” Cox said.

Cox said he fooled with the age brackets during the second tournament to make things more challenging. He said he moved two golfers up a bracket.

“Last week Caden Briscoe and Carter Nygaard golfed with the 8 and under group and this week I moved them up to the 9-11 group,” he said. “They both never played that division before and it is harder. The tees are further back, but that still didn’t slow them down as they both beat that age group, finishing first and second.”

Cox said the 9-11 group had six to seven golfers in it and he is excited with the whole group. He believes by high school this group will be a solid bunch of golfers.

Cox said he gets a lot of enjoyment from watching the little kids.

“It’s fun to see the little guys because they get so excited when they do win and are so elated,” he said. “The little kids have the biggest smiles for the littlest of things in golf.”

Cox said the next tournament will be Monday. For more information call Lake View Executive Golf Course at 775-727-4040.