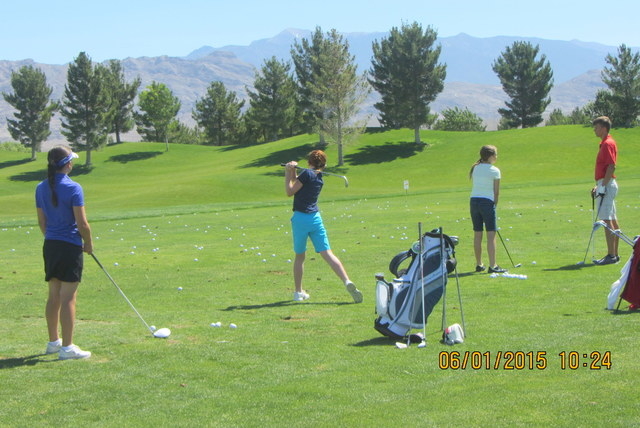 The last tournament will be a two-day tourney, which will be the Jean Goins Memorial Golf tournament at Lake View Executive Gold Course.

Junior Golf costs $5 and there is a $20 Junior Golf registration fee.

The age range is from 6-17 and currently the program has 35 to 45 kids participating.

“We have girls like Breanne Nygaard, who I think will be the second girl to win state for Pahrump,” said Cox, a former golf professional at Willow Creek.

According to Trojans Coach Bob Hopkins, Alaine Garrett was the only individual champion for Pahrump in 1997.

Austen Ancell was the first boy and second golfer to win an individual state championship for Pahrump. He is still doing Junior Golf tournaments and got his start in Pahrump doing Junior Golf.

“This summer we have two programs running,” Cox said. “Jason Pomroy, the golf director at Mountain Falls, started a new Little League golf program which is full this summer. So if kids enroll in both programs they will be playing golf four days a week.”

“The beauty of golf is we only need six kids to win a state championship, whereas football we need numbers like 40 or more,” he said. “Golf, we don’t need the large numbers, just quality.”

Cox said he enjoys teaching the younger kids because he feels it instills good values.

“I think the game teaches kids to manage their time, integrity and how to play by the rules,” Cox said. “It’s just a great game for kids to learn.”

Katie Floyd has two boys in the program and said it does a great job of teaching the game.

She said her 9-year-old son Jackson has been involved in the program for four years and her 6-year-old son Travis just started this year. According to Floyd, the program has taught her boys the rules, golf etiquette and a love for the game.

“They love the game and are serious about being golfers,” she said. “I don’t play myself but in walking with my son the past three years, now I would like to learn the game.”