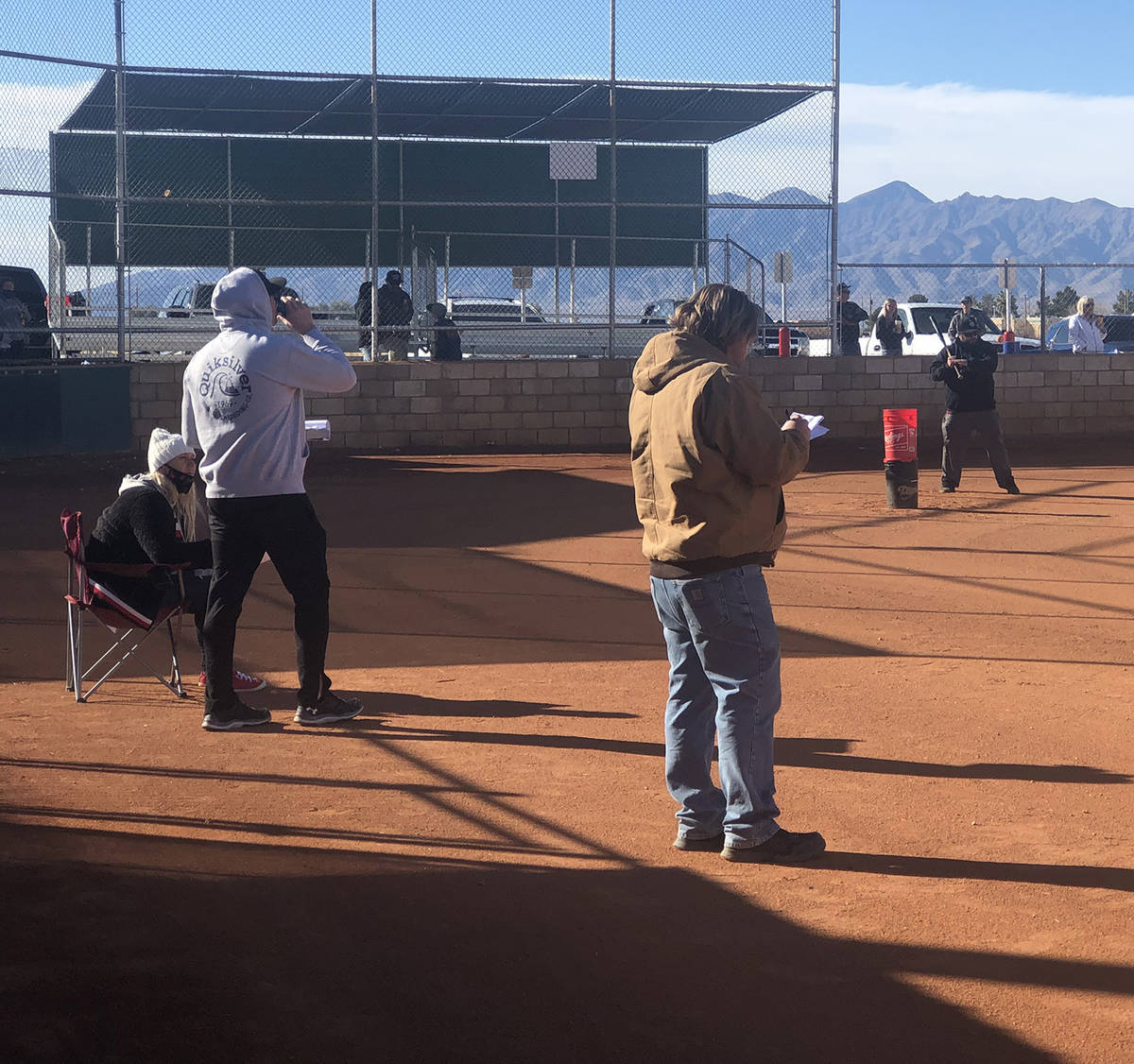 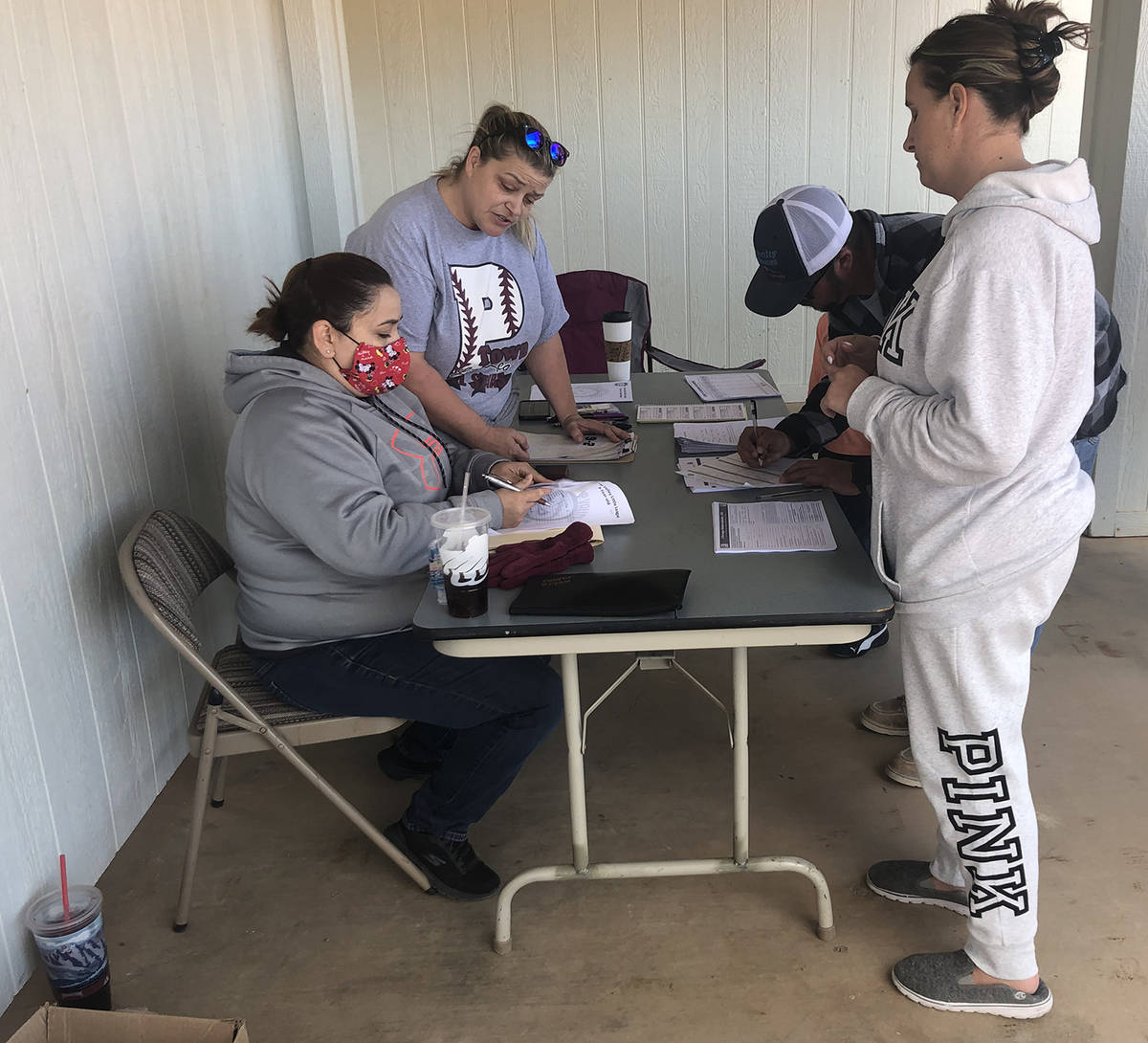 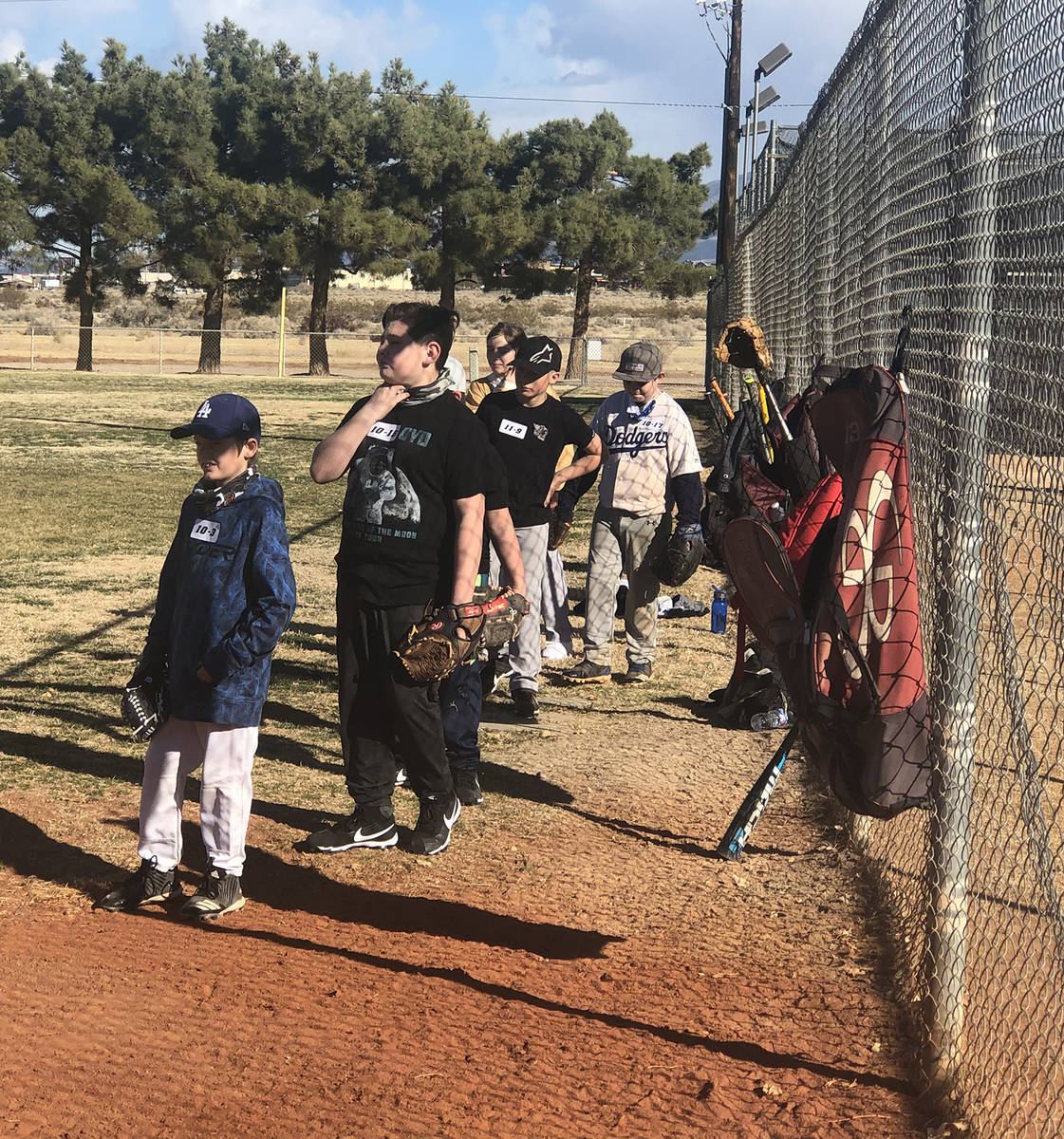 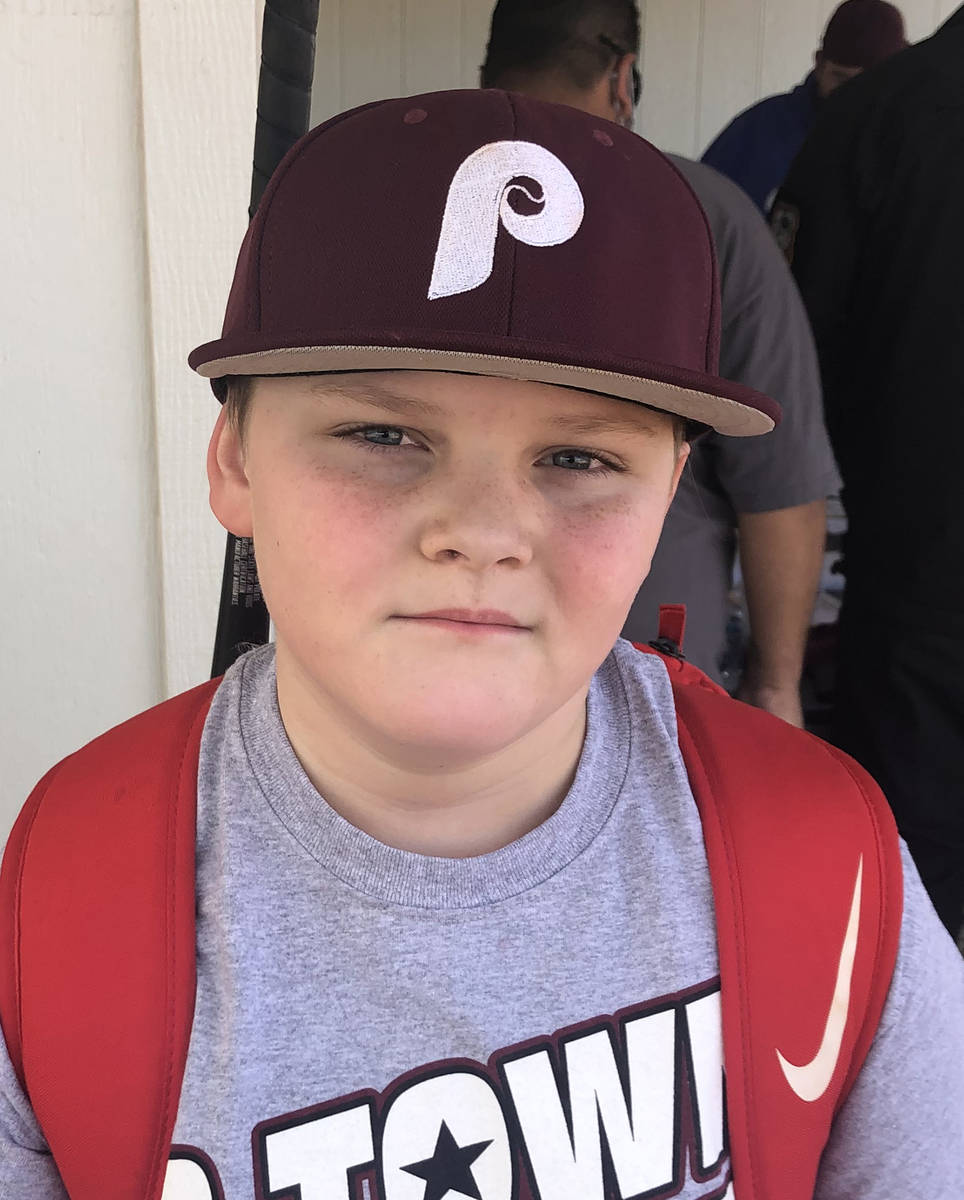 Tom Rysinski/Pahrump Valley Times Hunter Jones, 11, is one of several Pahrump Valley Little Leaguers who have been playing since T-ball, which is for players aged 4 to 6. 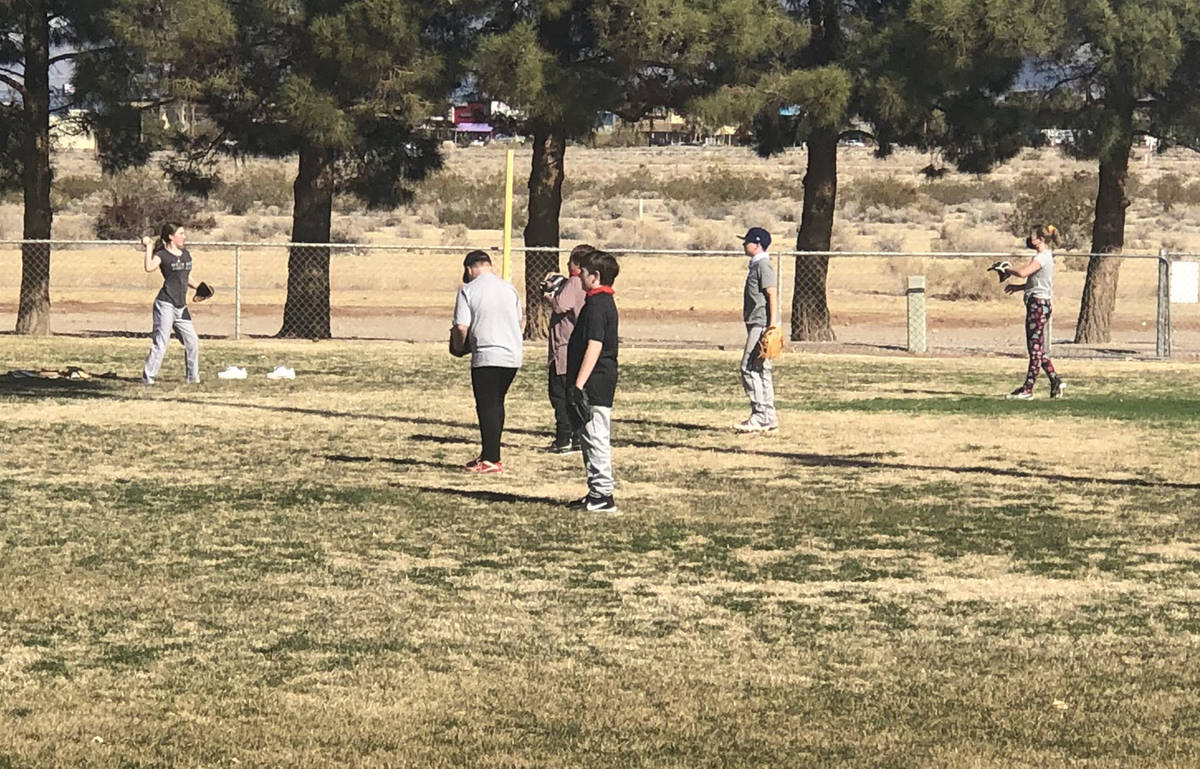 Softball is for girls, she was told. “But I was like, I want to play baseball with Max,” she said, referring to the oldest brother in the family, 18 months her junior. “I want to prove to him that softball and baseball are two different sports, and that he’s weaker.”

As it turned out, she did give softball a try. But it wasn’t for her.

“When I first played, all the girls were like, ‘Aaaaaahhhh! The ball!’ ” she recalled. “Since I was raised with boys, this is what I’m used to.”

“This” was the scene Saturday morning at Ian Deutch Memorial Park, when several dozen young athletes took to the fields on the third and final day of Pahrump Valley Little League’s signups and tryouts.

That kept the people at the desk set up to register new players busy, with Renee Jones and Victoria Lopez happily greeting each new prospective player.

“Very busy,” Jones said. “A lot more older kids, majors, juniors. We had so many waiting that the whole field was full. Kids need to get out there and have fun.”

Jones took time out from her league board duties to watch her 11-year-old son, Hunter, take his turn at bat. Well, sort of watch.

But Hunter looked good at bat, making solid contact on swing after swing.

“Where’d he just hit that to?” she asked before she allowed herself to watch. “Good job!”

Hunter is already a veteran in the game, having played since T-ball, which is for players aged 4 to 6. He gave himself a passing grade for the day.

“I did decent,” he said, noting that hitting was his strong suit for the morning. Hunter said he was a pitcher and first baseman, enjoying the former better although “I’m not really good.”

“We do four evaluations on a kid,” he explained. “Each player comes out and fields three ground balls. What you’re looking for there is footwork, glove work, and then they throw it to first, see if they can make the throw. Then they head out to the outfield and we do pop flies. You want to watch their glove work, their footwork, their hand-eye coordination. So they get three of them out there and throw it to second.

“Then they come in to bat and we give them anywhere from six to eight baseballs to hit, and the last thing is we watch them run.”

Over the course of three tryout sessions, there were plenty of kids to evaluate.

“We have a T-ball division, that’s usually our strongest with the most kids,” Swingle said. “Right now we’re sitting at seven teams, looking at eight teams, with 11 players each. We have a new division, a rookie/Single A division, where it’s going to be coaches pitching for the first half of the season and then we’re going to let the kids take over and see it how it goes. That division has four teams, looking at a fifth.

That means plenty of work for Lopez, who is the league’s scheduling coordinator. She’ll be the one to figure out which one of those many teams is on which one of the town’s fields at a given time.

“We have two field up here by the snack bar, the major field and the junior field,” she said in between watching her son, Christopher Gonzalez, shag fly balls during the hitting part of tryouts. Like Hunter, Christopher, 12 (13 in Little League age) has been playing since T-ball. “Down after the playground we have two rookie fields or minor fields, and I believe we have two T-ball fields.

“We’re hoping we can do one weekday game and one Saturday game, or a doubleheader for the juniors. We’re looking at two or three games per week, plus practice days.”

And the PVLL will make maximum use of the fields on practice days.

Between now and then players will be assigned to teams, some through a draft scheduled for Feb. 23, some through luck of the draw.

“From Triple-A up there’s a draft,” Swingle said. “We decided that we were going to allow the coaches to get four picks, then the other names go into a hat and they pull names from the hat to kind of make the teams more fair.”

The idea is to both prevent any one team in a league from being loaded and to remove politics from the process. The sooner the teams are organized, the sooner they can take the field.

“We were pushing for March 20,” Swingle said as a potential season-opening day. “It doesn’t look like we’re going to have an opening day because of the COVID mandates. With all of these new additions we might push everything off a week because we have to build teams.”

Meanwhile, Melanie Swingle is just happy to be back on the field.

“I think I did pretty good,” she said of her tryout. “I’m not really good at batting, but I’m going to work on that.”

In fact, she is happier in the field than at the plate, saying her speed and arm make her a natural outfielder, but not just anywhere.

“They were like, you aren’t very good in left field,” she recalled. “But when they would hit to right field, I was like, yes, this is my moment. Lefties, they hit to right and sometimes center, and righties, which is most everybody, that’s all over there.”

And when the ball comes her way, she expects to deliver it where it’s supposed to go.

“I normally throw it pretty high; it doesn’t always hit my cutoff,” she said. “That makes me mad.”

But only temporarily, because for Melanie, baseball is her free time. “This is how I get out of the house,” she said with a smile.

And after being cooped up for so long, getting out of the house is a big deal, allowing her to avoid what to her was the worst part of the past year.

“Babysitting,” she said. “There’s so many of them.” 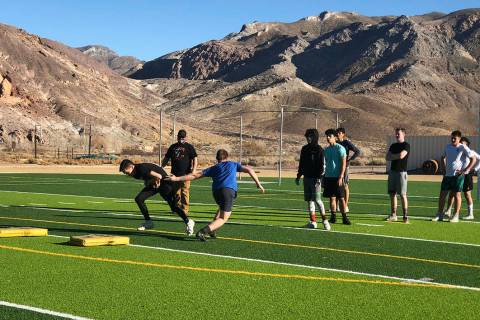 Tom Rysinski: To play or not to play, that is the question
By Tom Rysinski Pahrump Valley Times