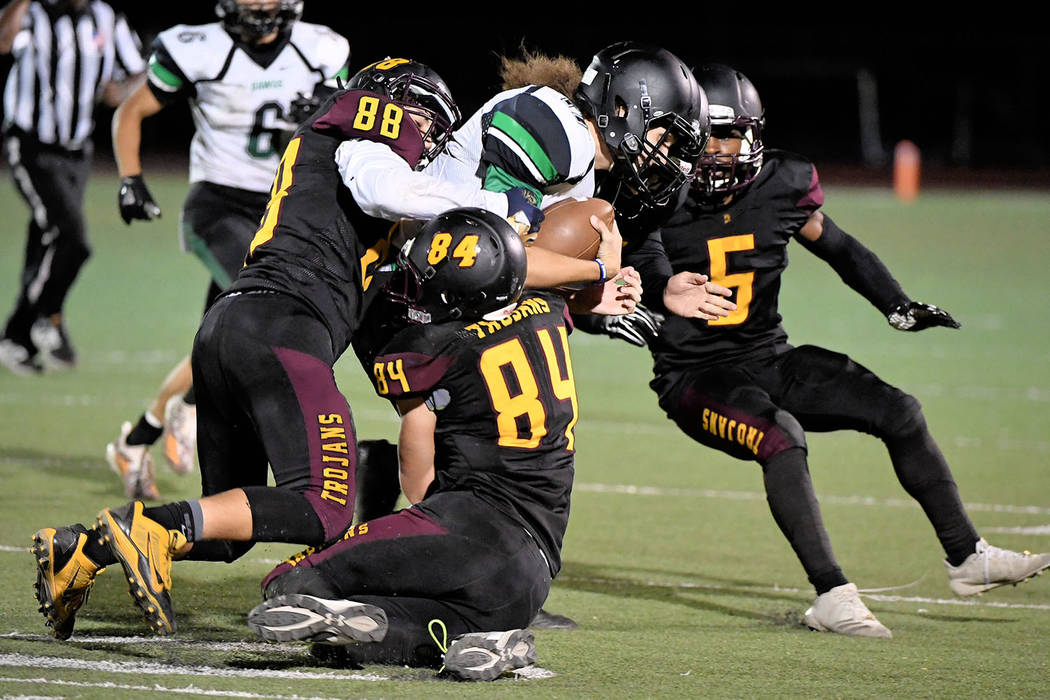 Peter Davis/File photo Tony Margiotta, left, and Andrew Avena team up to bring down a Virgin Valley runner during last season's game between the teams at Trojan Field. 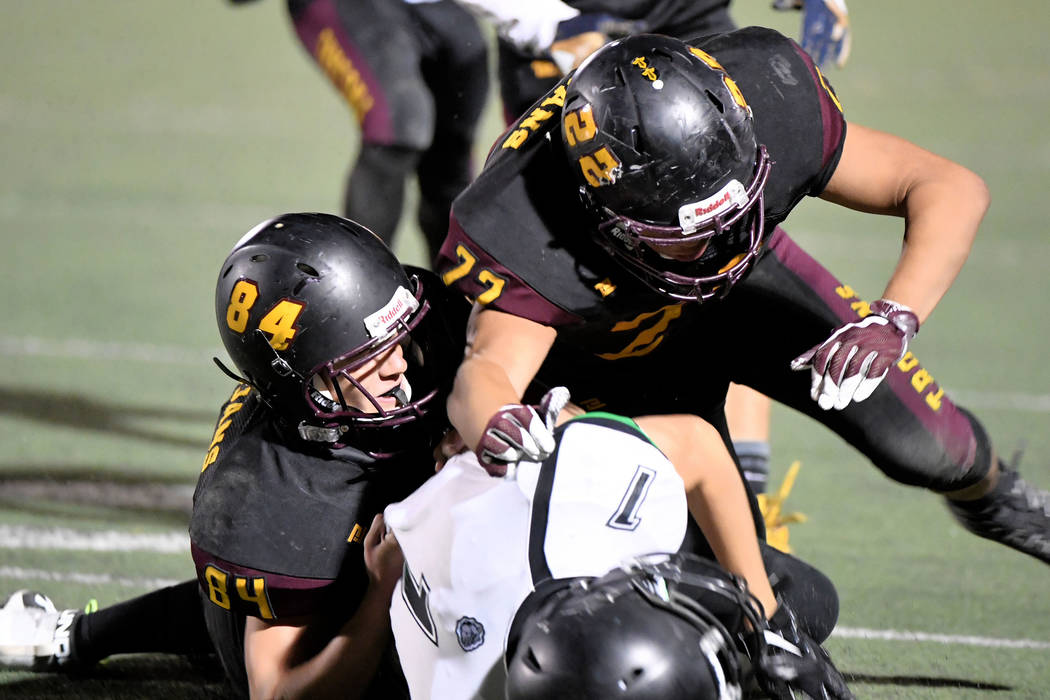 The Pahrump Valley High School football team has played Virgin Valley more times than any other opponent. And the rivalry has not gone well for the Trojans.

The Bulldogs own an overwhelming 42-7 edge in the series, with the only period of success for the Trojans coming 40 years ago, when Pahrump Valley went 5-3 between 1976 and 1980. There were a few stretches during which the teams played twice each season, and they also have met three times in the playoffs.

The Trojans will try and snap a 23-game losing streak against the Bulldogs tonight when the teams meet at 7 p.m. in Mesquite.

Perhaps none of the 23 consecutive losses stung as badly as last season’s game at Trojan Field.

The Bulldogs pulled out a 26-24 victory when they stopped a 2-point conversion with 3.8 seconds left.

Pahrump Valley, which once trailed 20-0, took the ball with 1:52 remaining and went 62 yards, with Tyler Floyd hitting Tony Margiotta with a 7-yard scoring pass to set up the climactic play.

Until the failed conversion — the fourth of the game for the Trojans — the final drive was one of the Trojans’ finest moments of the season.

They overcame two sacks and converted fourth-and-9 and fourth-and-11 plays along the way, and they showed both poise and the ability to pass in the clutch along the way. But the failed conversion run left them 0-2, with the two defeats by a combined three points.

Then there is the small matter of overcoming last week’s demoralizing loss to Lowry in a game the Trojans led 42-13 only to lose 46-42 in the final minute.

“Everyone in our program is ready to bounce back after the tough loss Friday,” Pahrump Valley coach Joe Clayton said. “We learned from our mistakes, and the boys realize there is a long season ahead.”

For their part, the Bulldogs are coming off a 21-7 victory over Class 4A Clark, with the Chargers’ only touchdown scored on the opening kickoff.

Virgin Valley scored all three of its touchdowns through the air, although their rushing game accounted for 195 yards to 117 passing.

Sophomore quarterback Kyle Sudweeks, playing in place of senior Meb Hollingshead, completed 9 of 17 passes for 117 yards and threw one interception to go along with the three touchdowns, two of which went to senior Tanner Fielding, who finished with three catches for 77 yards.

On the ground, Wyatt Delano ran for 130 yards on 15 carries to lead the Bulldogs. Delano also was a force on defense, leading Virgin Valley with 7 tackles and making 2 sacks.

Game time in Mesquite is 7 p.m.