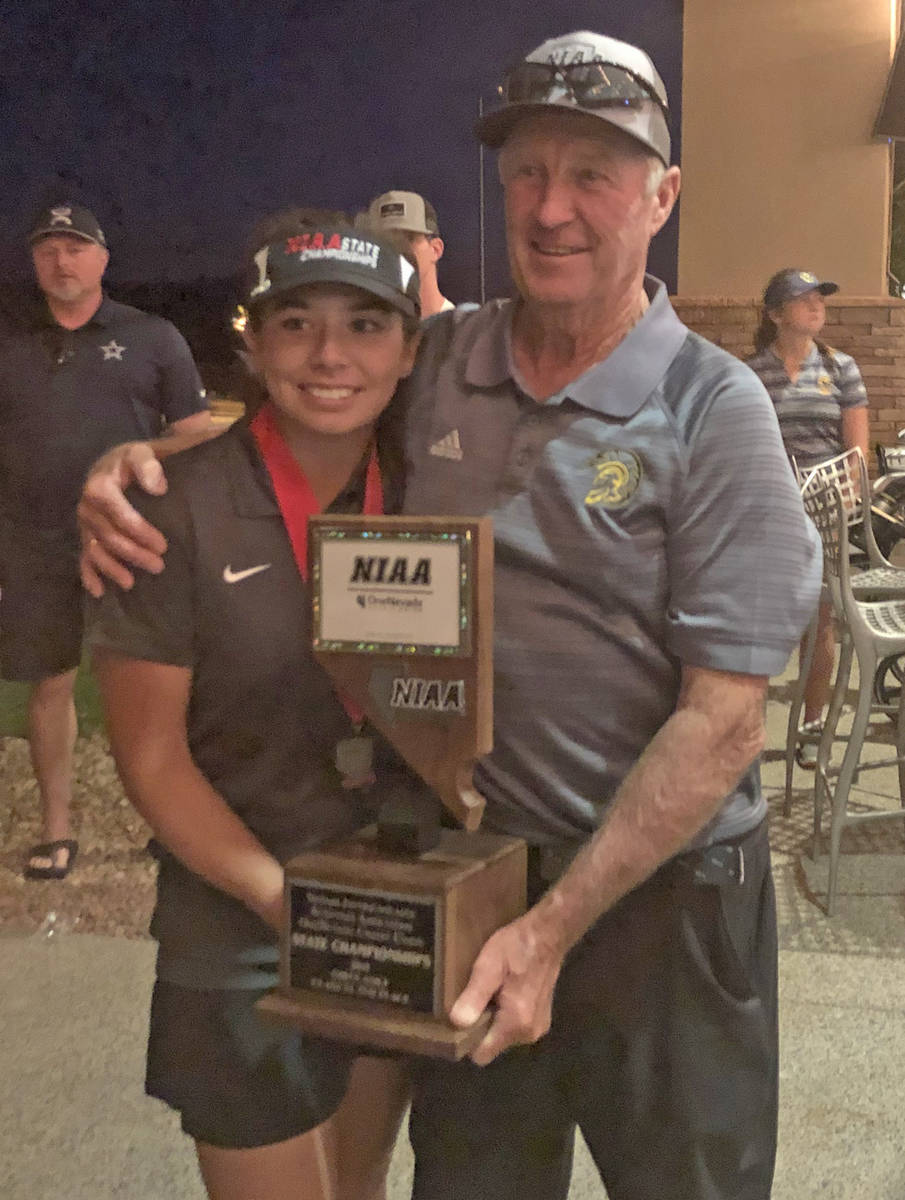 File photo Then-junior Breanne Nygaard and PVHS golf coach Bob Hopkins pose with the trophy after the Trojans finished second in the 2019 Class 3A State Golf Tournament in Boulder City. 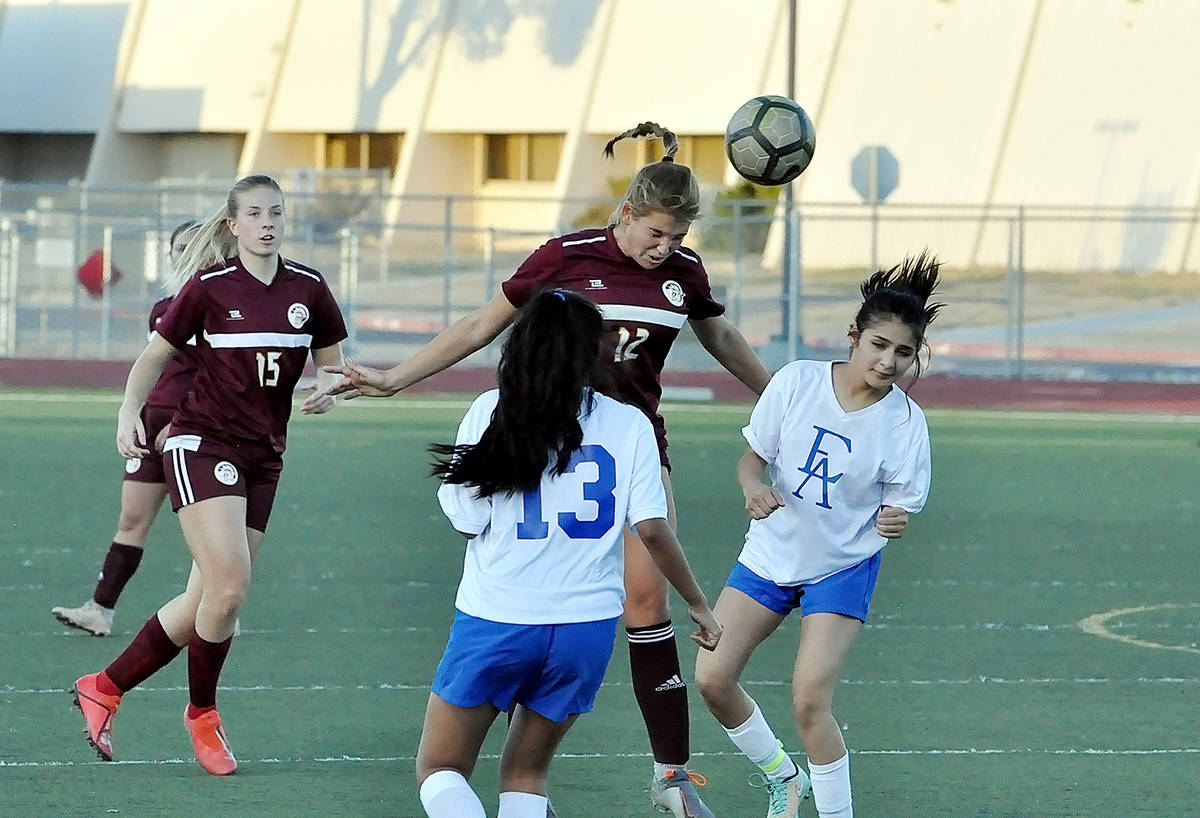 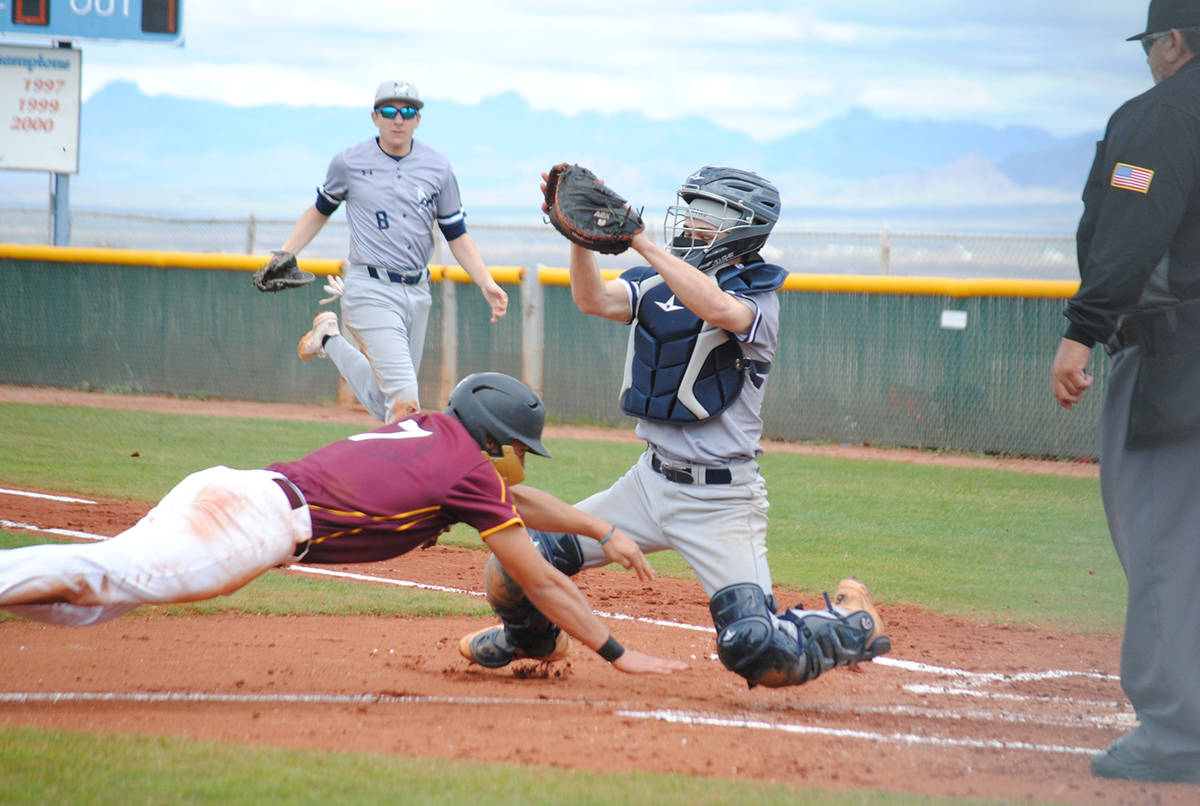 Charlotte Uyeno/Pahrump Valley Times file Pahrump Valley's Jalen Denton slides into home during a 2020 game against The Meadows during the Route 66 Baseball Classic in Needles, California.

The COVID-19 pandemic is never far from people’s minds, and even the annual signing day ceremony at Pahrump Valley High School celebrating seniors who will play a sport in college had a different look to it.

Everyone was masked — they came off only for the obligatory photos — and the Wednesday morning ceremony was shown live on the PVHS athletics Facebook page. But the most important thing remained the same: Some very hard-working and talented young people were recognized for something special.

“I’m confident that each of these athletes realizes the value of this opportunity and will continue to strive for success,” said Jason Odegard, the school’s athletic administrator, who introduced this year’s signees: Jalen Denton, who will play baseball at Williston State College in Williston, North Dakota; Breanne Nygaard, who will play golf at the University of St. Thomas in St. Paul, Minnesota; and Maddy Souza, who will play soccer at Casper College in Casper, Wyoming.

Nygaard enters the most intriguing situation. St. Thomas, long a Division III powerhouse, was basically kicked out of the Minnesota Intercollegiate Athletic Conference for being too good at almost everything. Instead of finding another D-III home, or sliding into Division II, the Tommies are taking the dramatic leap right into NCAA Division I play and will become a member of the Summit League in most sports.

St. Thomas is the first university in modern history to make that leap, needing an NCAA waiver to do so, but with 22 sports and more than 10,000 students, it appears equipped to make the move. And Nygaard is already a fan of Tommies women’s golf coach Sara Evens.

“She made me feel a part of the team from the very beginning of the recruiting process,” Nygaard said.

“It is a very exciting time for us, and even more exciting is that Breanne will be a part of history as the first Division I class at St. Thomas,” Evens said. “Breanne has family in Minnesota, and they were definitely my recruiters in helping me promote St. Thomas, our golf program and the overall vibe of the university and how well Breanne would fit into our program.

“I have not seen Breanne play, but with our phone conversations, her resume and swing videos, I know she will excel at St. Thomas and be a difference maker right away”.

Nygaard brings an impressive resume to the college game. She crushed it at the 2019 Class 3A Southern Region Tournament at Mountain Falls, firing rounds of 71 and 80 to defeat rival Carolyn Lemon of Western by 15 strokes and lead the Trojans to the team title by 20 strokes over Boulder City. She followed that up by placing second in the Class 3A State Tournament in Boulder City.

Nygaard, who plans to major in business administration, cited the close-knit community and support she enjoyed in Pahrump and added thanks for her teachers, who helped her out “even while missing a lot of time, especially early in the year,” because of golf.

Denton said he learned some key lessons during his time in high school, especially “never settle” and “always believe in yourself.” In thanking his parents, he noted, “They have sacrificed so much to get me where I am today.”

Williston State is a member of the National Junior College Athletic Association and the Mon-Dak Athletic Conference. The Tetons were 6-8 when the 2020 season was canceled because of the pandemic.

Souza, flanked by both parents wearing Casper T-Birds gear, not only thanked her high school and club soccer coaches but basketball coach Bob Hopkins, specifically noting his quote of the day “every day before practice” as something she will remember.

Souza’s junior season, which included a 17-3-3 record and an unbeaten Sunset League campaign, included 22 goals (tied for second on the squad) and 11 assists (tied for third). Her 13 goals were second on the team as a sophomore, and her 7 assists tied for third. Souza also recorded 4 goals and 3 assists as a freshman.

Casper College, also a member of the NJCAA, added men’s and women’s soccer in 2020.

In his closing remarks, Odegard gave his own version of “it takes a village.” He thanked all of the coaches, parents and teachers for their efforts, saying, “Each and every one of you played a part in the success of these athletes.”