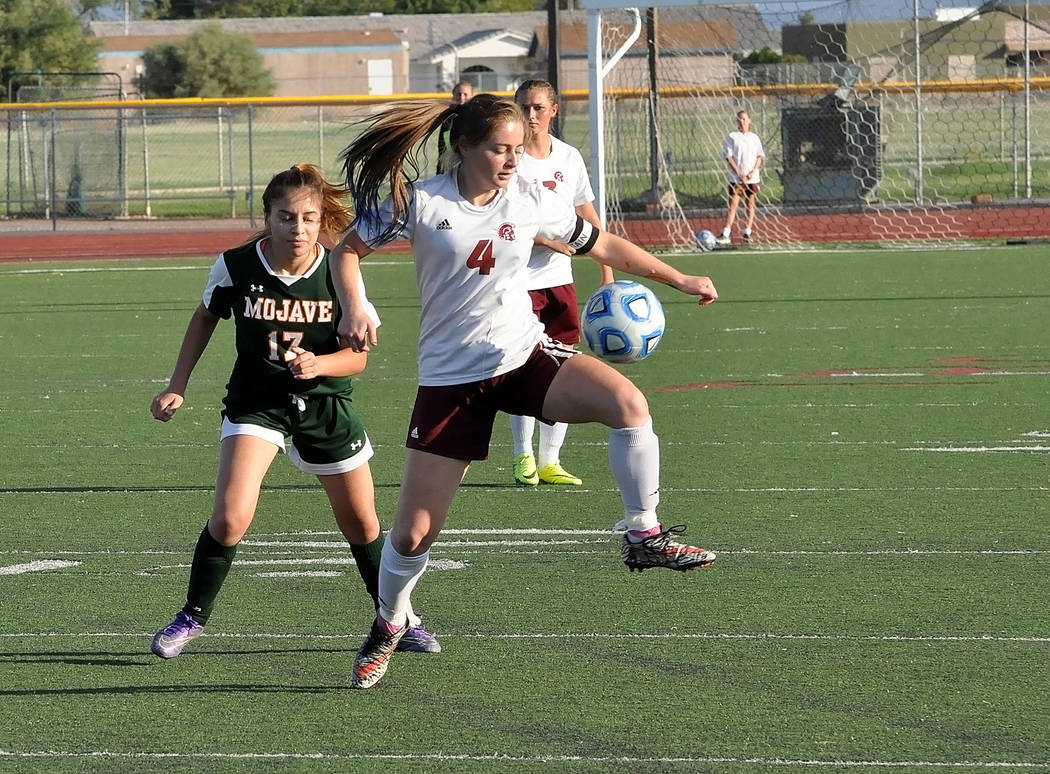 Horace Langford Jr./Pahrump Valley Times Senior Kathy Niles makes a great midair stop for the Trojans during the Mojave game. Niles had one assist and numerous shots on the goal on Wednesday. 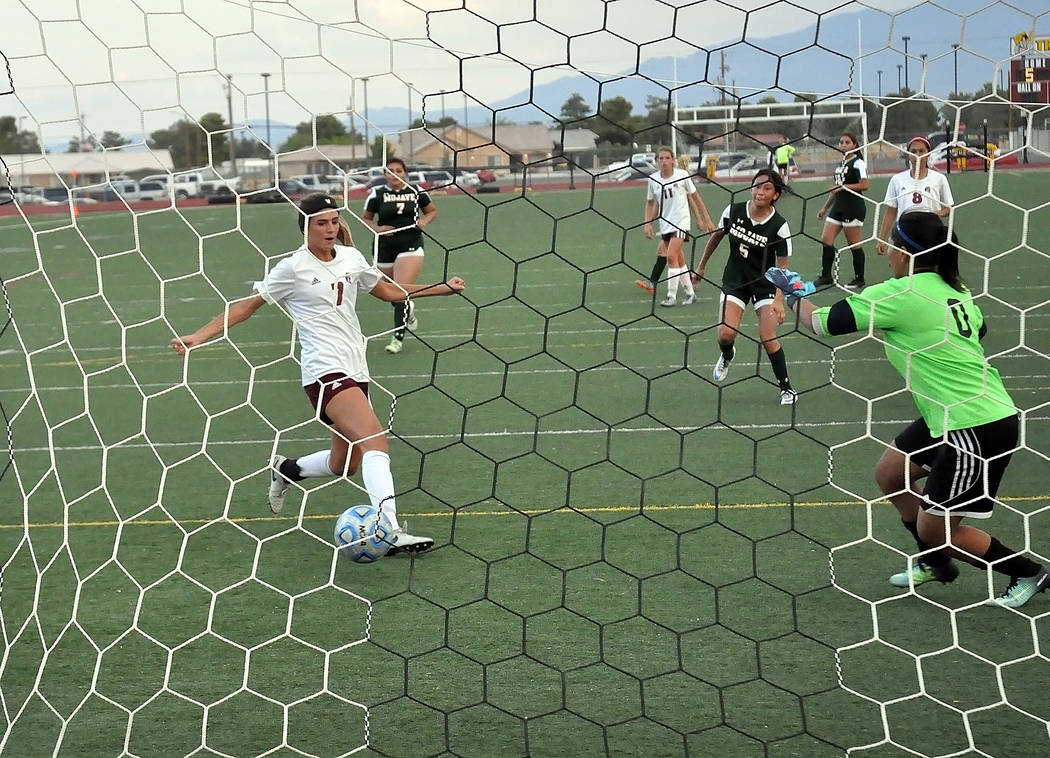 Horace Langford Jr./Pahrump Valley Times Vaniah Vitto scores one of three for the night against Mojave. Vitto started the scoring against Mojave with her first goal 17 minutes into the game in the first half. 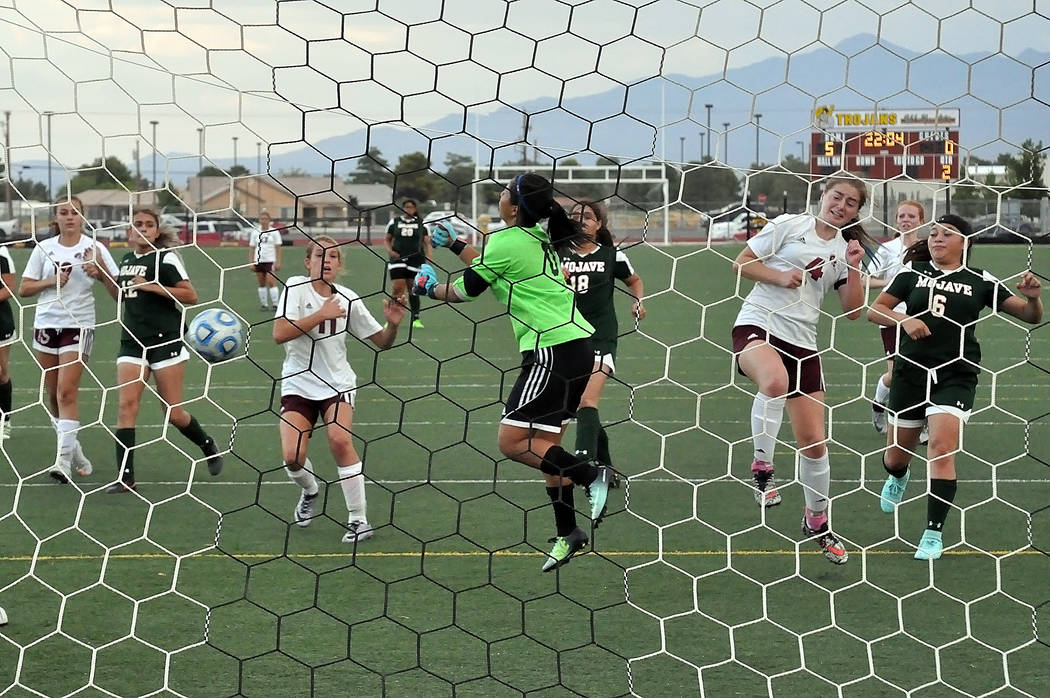 Horace Langford Jr./Pahrump Valley Times Freshman Madelyn Souza scores the first goal of the second half with an assist by freshman Makayla Gent. She made the score 3-0. The Trojans won the game 8-0. After Souza’s goal the scores came every two minutes, until the game was won by the mercy rule. 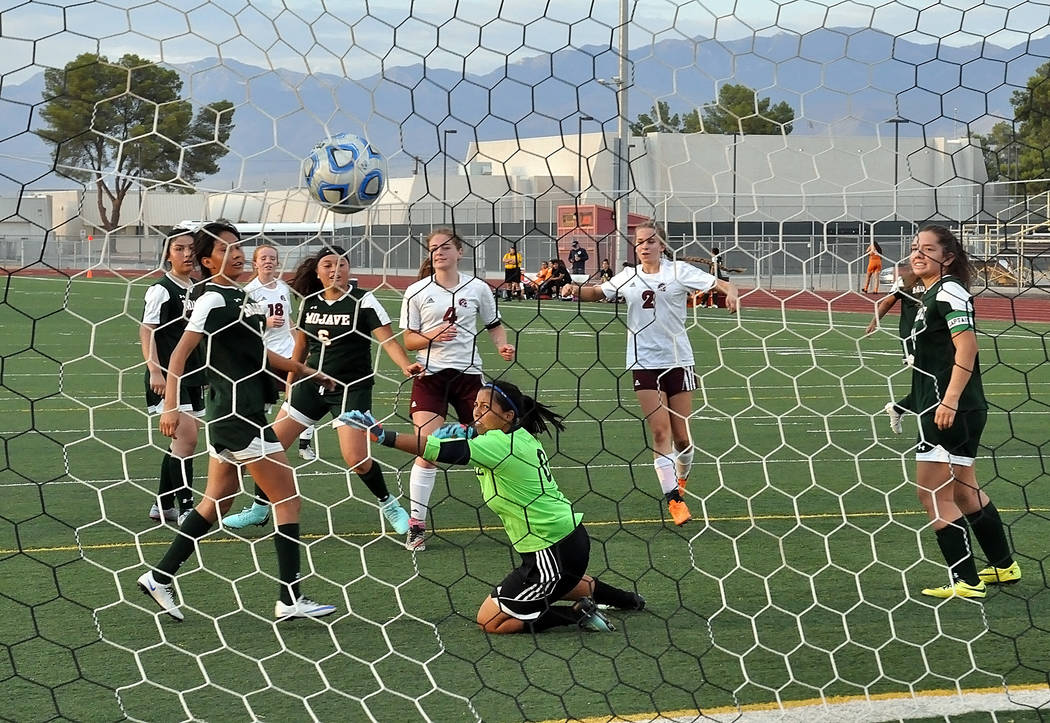 Horace Langford Jr./Pahrump Valley Times Got net! Junior Grace Gundacker helps the cause as she scores goal number two of the second half just two minutes after Madelyn Souza scored the first one of the second half.

In Pahrump Valley’s first league game of the season, the Trojans easily rolled past Mojave 8-0.

The Wednesday evening game was called with 11:38 to go in the game due to the league mercy rule.

Pahrump (6-3, 1-0 Sunset League) took some time to get warmed up, even though the entire game was played on the Mojave (1-2, 0-1) side of the field in both halves. Mojave recorded just one shot on goal the whole game. The Trojans took over 20 shots in the first half.

The first goal came late in the first half at the 17-minute mark. Vitto got an assist from senior Kaitlyn Carrington. Vitto went on to score two more times, scoring twice in the second half.

“The game was slow and hard to get motivated,” Vitto said. “It took us a while to get the ball going, but once you get the first goal in it’s like a domino effect. Once the first goal goes you just get more momentum. Especially during the second half when Madelyn (Souza) scored and Makayla (Gent), those two are doing well as freshmen.”

“Things are really slow in game like this,” she said. “When we go up against teams like this it takes us a little bit to get going. It’s good to win and it’s good that it does help our league play, but games like this don’t showcase our talent that we have. I want our team to go 110 percent still, even in games like this and sometimes you have to pull them out to get them motivated. But we pulled things together in the second half and played a lot better. I really like how our forwards pulled it all together toward the end.”

Other scorers were freshman Makayla Gent, who put the ball in the net for the last goal of the first half. Gent had one more goal in the second half and an assist.

Vitto feels the team is on track for a great year.

“I think we will do well this year,” Vitto said. “This is the best team I have played with in my four years so I am really excited.”

The girls team was up at Elko for the Spring Creek Tournament and went 1-2, losing to two 4A schools. The tournament wasn’t a true test as some starters were absent from the team.

The team played against Coronado first and lost 7-1.

“We may not have won that game, but it was a good experience for our freshmen and our first-year senior (goal)keeper, Alyvia Briscoe who had 19 saves,” the coach said.

The second game was against Elko and the girls won 1-0.

“We won because of a goal by our foreign exchange student, Beatrice Favella, assisted by Halie Souza,” Julie Carrington said. “Both girls are juniors. Alyvia Briscoe had 15 saves in that game.”

The last game was against Shadow Ridge and the Trojans lost 4-0.

“Briscoe had 20 saves in that game,” the coach said. “So even though we didn’t place second like the previous year, we utilized the tournament more as a training experience for the younger players on the team. I believe it was successful. All the young ladies played hard and will now be more prepared for our upcoming games. I’m looking forward to a great season!”