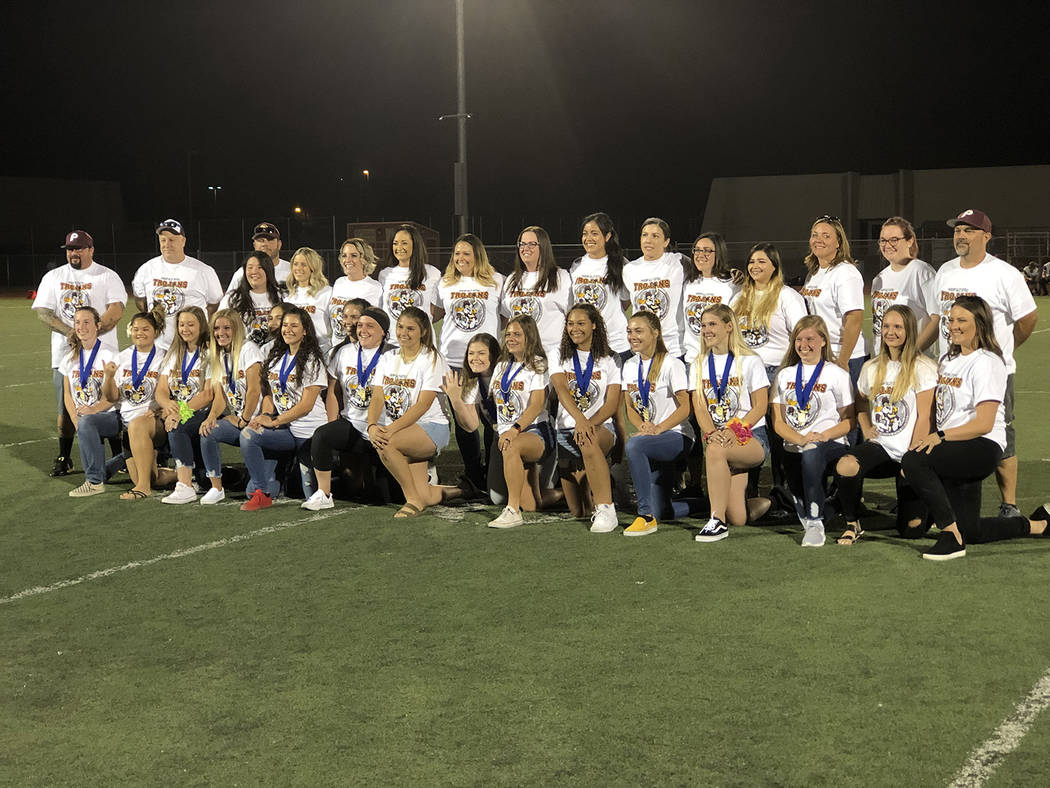 Tom Rysinski/Pahrump Valley Times Pahrump Valley High School softball players and coaches pose with alumni from the school's 2003, 2004 and 2005 championship teams after the 2019 champions received their rings at halftime Friday at Trojan Field.

The players were given their state championship rings during a ceremony at halftime of Pahrump Valley’s football game against Lowry.

Adding something extra to the moment was a group of alumni who played during the 2003, 2004 and 2005 seasons, when then-coach Rich Lauver led the Trojans to their first three state titles, who came back to their alma mater to hand the rings to the 2019 champs.

“We knew that the rings wouldn’t come in until sometime toward the beginning of the school year, and the football game was the perfect opportunity to present them,” Trojans coach Cassondra Lauver said.

Each was introduced individually to cheers from the opening-night football crowd, and the older players posed for pictures with their younger counterparts after the rings were distributed.

The two groups of players were not only together on the field but also together on a commemorative T-shirt designed for the occasion, listing all four years Pahrump Valley has won a state championship.

“The shirts are a replica of the shirts those alumni girls got when they won state championships,” Cassondra Lauver explained. “We were able to recreate that shirt and add our 2019 information to it. I thought that was a great way to unite two groups of people who are some of the only people that ever got to experience the feeling of winning a state championship.”

And bringing them all together during a football game with a large crowd in the stands was a way to celebrate while also sending a message, the coach said.

“Our hope is that it helps to build school spirit and community pride, as well as be an example to other athletes within our school that this type of success is possible,” she said.