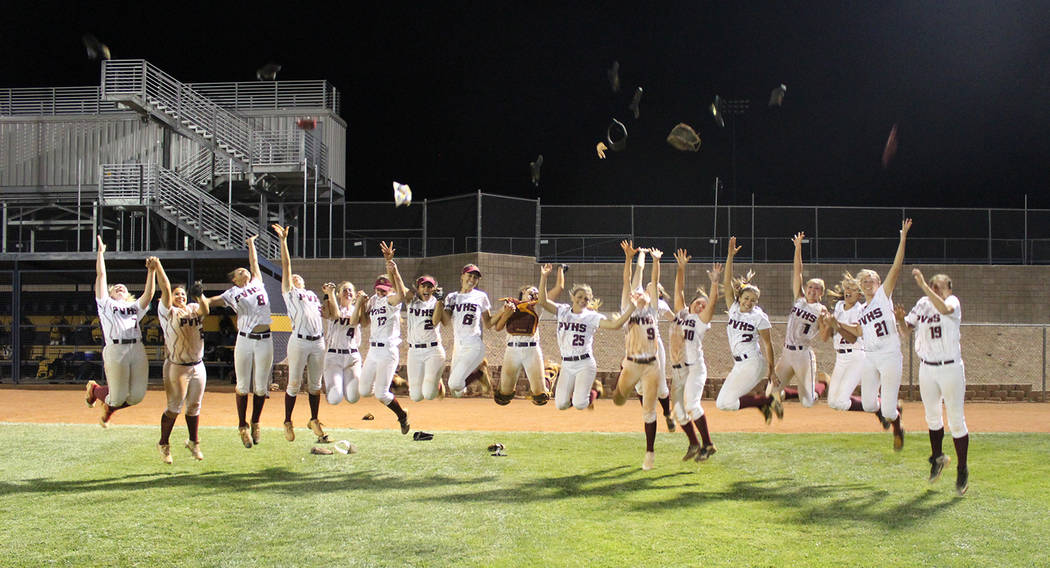 Cassondra Lauver/Special to the Pahrump Valley Times The Pahrump Valley softball team celebrates the 15-6 win over Moapa Valley last Friday night in Boulder City that guaranteed the Trojans a return trip to the Class 3A state championships. 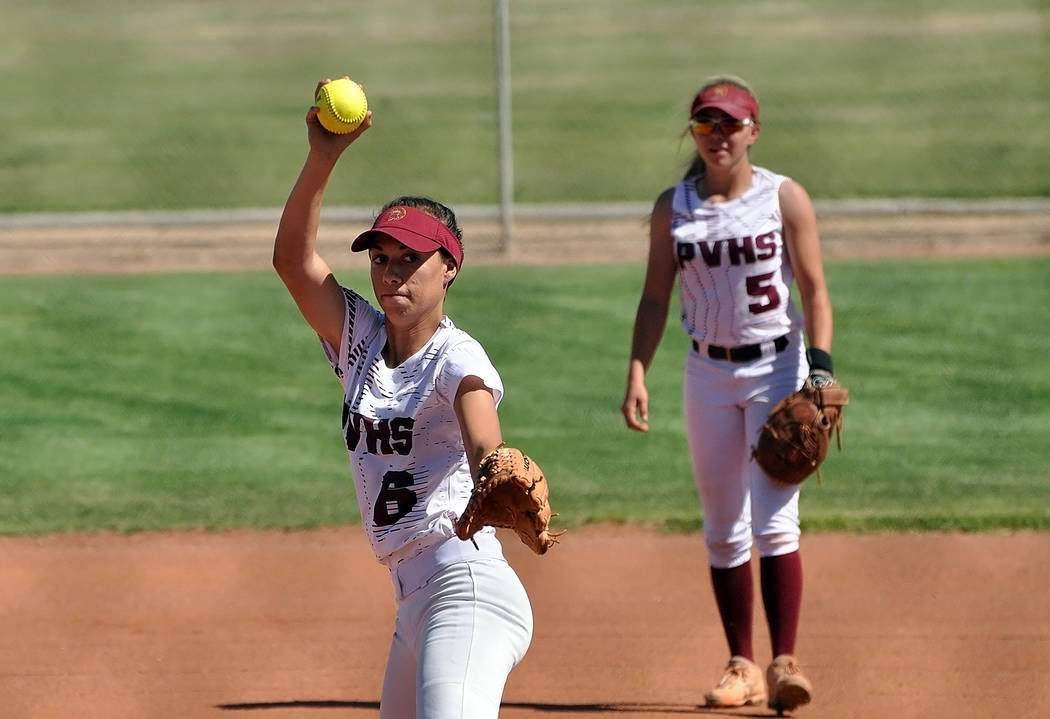 Then there’s what the Pahrump Valley softball team did last Friday night in the Class 3A Southern Region Tournament.

A good game was expected. It didn’t work out that way. The Trojans’ bats caught fire. Skyler Lauver, Ashleigh Murphy, Taylor Egan and Jackie Stobbe each hit a two-run single up the middle. Evandy Murphy, Amaya Mendoza, Stobbe and Lauver each scored two runs. Kathy Niles had two singles, an RBI and a run scored. McKayla Bartley reached on an error, scored a run and singled. Samantha Riding drove in a run.

And that was just the third inning. Seriously. Pahrump Valley (26-10) batted around twice during a 13-run explosion that led to a 15-6 victory over Moapa Valley, sending the Trojans back to the Class 3A state tournament.

“That inning was just the craziest thing ever,” Bartley said. “It was such a good feeling. I feel like our energy level helped us get into our opponents’ heads, but not only that, but to help boost our morale. We used it to our advantage.”

“I can’t really explain it,” senior Alyvia Briscoe said. “It was a really good two-out rally. We were finding every hole in the field. It was awesome.”

Lauver, who had the first of the four two-run singles, came up with the Trojans trailing 1-0.

“I walked up to bat with two outs and the bases loaded and I was just like, ‘You know what, last year I lost this regional game,’ and I’ve had that in my head since that game,” Lauver recalled. “So when I went up to bat I was thinking, ‘I have to make this happen.’ I hit the ball over the middle, and it all just kind of went from there.”

“It was definitely a great feeling to have. There was a lot of adrenaline that just built up. It was really fun to be in there.”

It was a far different feeling than the one the Trojans had just two days earlier, when Boulder City handed them a 15-3 thumping that sent them into the losers’ bracket.

“I think it kind of hurt us losing to Boulder City, especially how bad we lost, but we still had a lot of confidence,” Briscoe said. “We played all the other teams before, and we knew we could get out there and still make it to state. We weren’t ready for our season to be over.”

“I think we looked at it as an opportunity to grow instead of as a loss,” Bartley said. “We knew it was big, but we knew we needed to work harder from it. We just needed to step it up.”

“I know that there were a few of us that were a little iffy about having to win all those games, but overall I think we had confidence in ourselves and each other and knew that we were going to be able to make it,” Lauver added.

“It was just, ‘Now we’ve got to win three straight,’” he said. The Trojans defeated Virgin Valley 18-5 and Mojave 10-3 to get to Moapa Valley. “We were pretty confident against Mojave, although they did give us a good game. Moapa did not give us the kind of game I thought they would, but we had that one great inning which kind of deflated them.”

Another loss to Boulder City the next day in the region championship was secondary to the fact the Trojans earned a return trip to the states.

The Trojans will continue play in the Class 3A championships at noon today against either Lowry or Boulder City at Reno High School.