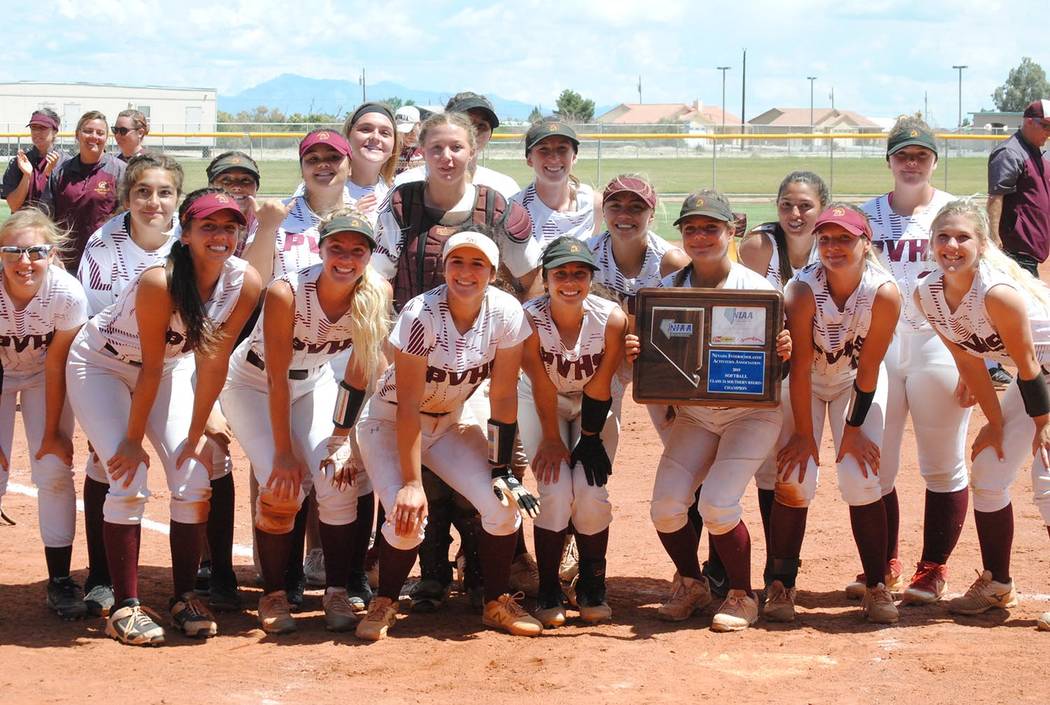 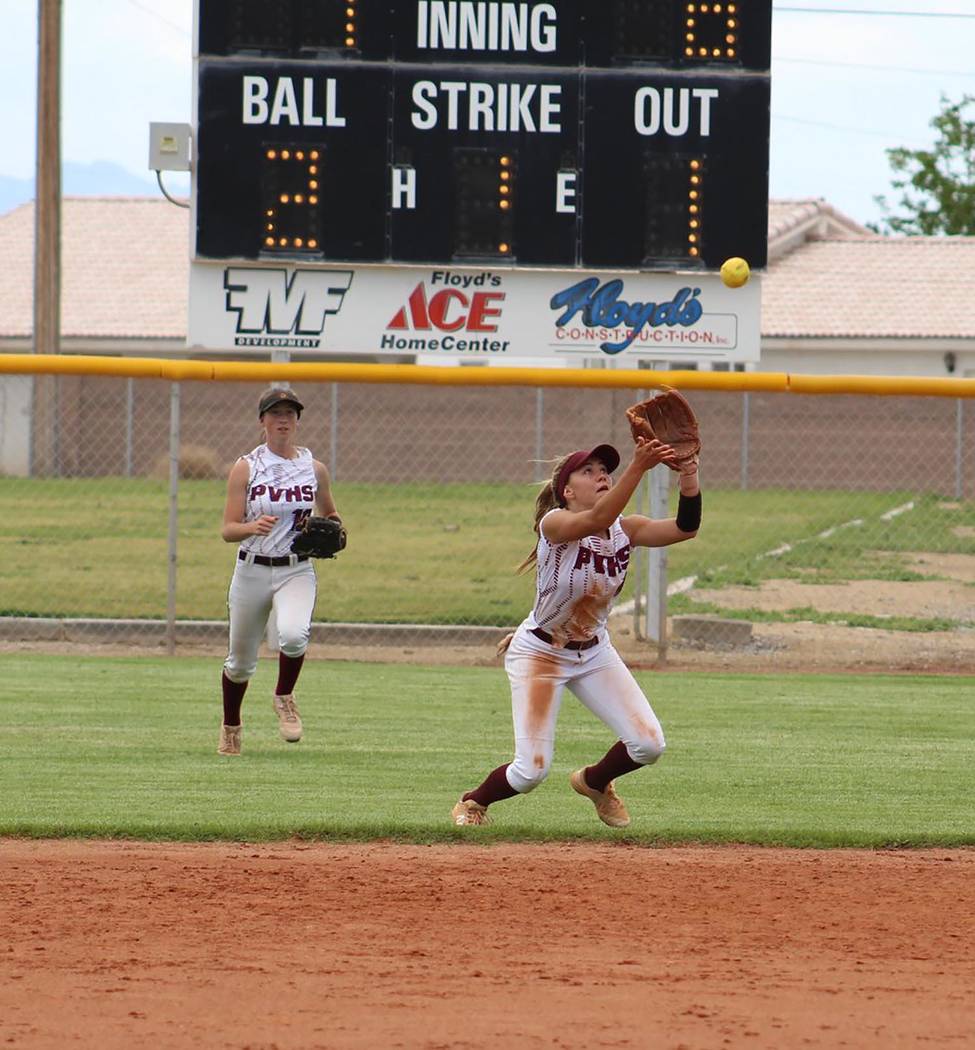 Cassondra Lauver/Special to the Pahrump Valley Times Pahrump Valley second baseman Skyler Lauver lines up a short pop fly for the second out of the fifth inning Saturday during the Trojans' 8-4 win over Moapa Valley at Floyd Field in Pahrump. 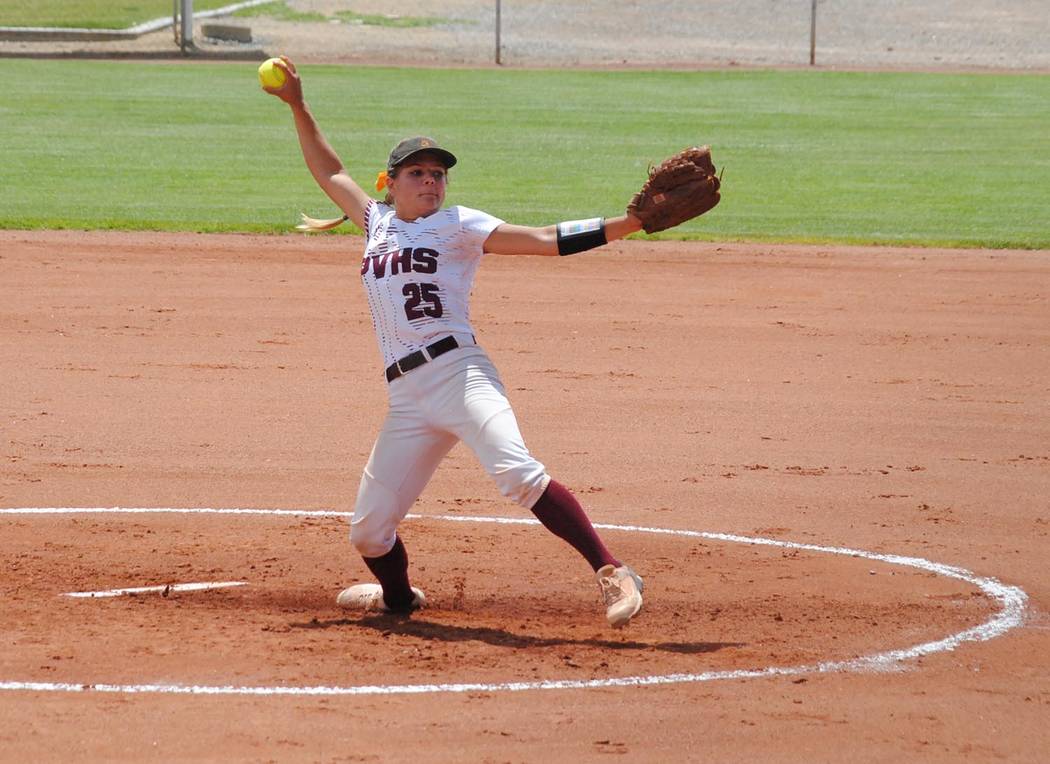 Charlotte Uyeno/Pahrump Valley Times Ally Rily pitched all seven innings for Pahrump Valley, drove in a run and scored twice as the Trojans defeated Moapa Valley for their first region title since 2014.

When Cassondra Lauver began coaching the Pahrump Valley High School softball team this season, it was immediately clear that there was only one goal: a state championship.

But that doesn’t mean the Trojans (27-11) won’t celebrate the milestones they hit along the way.

And there was plenty of celebrating Saturday as the Trojans handled Moapa Valley 8-4 to claim their first Class 3A Southern Region Tournament title since 2014.

“We expected to come in and have a battle, but I think the girls came in relaxed and confident,” Lauver said after snapping pictures of almost every possible combination of players posing with the trophy. “We knew Moapa was not going to just roll over and let us win, but they just came in and are really confident in themselves right now. I think they’re trusting that.”

That trust and confidence served them well during a game in which they were outhit 12-6 yet took an early lead and never surrendered it. Among the several storylines that explain the outcome, one is the most straightforward: The Pirates’ pitcher beat herself, and the Trojans’ pitcher did not.

Pahrump Valley sophomore Ally Rily had only one rough inning, the fifth, when the Pirates (22-8) recorded 5 of their 12 hits and scored 3 of their 4 runs, mostly with two outs. In fact, the one hit that came before the second out was on the pitch after one that almost everybody not wearing blue jerseys thought was strike three. But the Pirates took advantage, getting 4 consecutive singles before Rily got the third out via a strikeout.

By then, the Trojans had taken an 8-3 lead, the first 5 runs largely thanks to the struggles of Moapa Valley sophomore pitcher Madilyn Fairchild. Rily reached base when she was hit by a pitch with two outs in the first inning. She promptly stole second and scored when a fly ball off the bat of Jackie Stobbe landed in and then fell out of the glove of Pirates center fielder Sierra Bunker.

The Trojans’ defense pulled off the play of the game in the next half-inning. Moapa Valley’s Terra Evans ripped a double that hit the fence in right on two hops. Junior right fielder Kiley Lyons fielded the ball and fired it to the relay person, Skyler Lauver, who turned and sent a bullet to third, where Stobbe put the tag on Evans. A potential one-out triple became the second out.

“The girls trust what they are able to do, they trust each other and they talk out in the field,” Cassondra Lauver said. “They communicate very well.”

Things really went south for Fairchild in the second. She walked catcher Deeanna Egan, then wild-pitched courtesy runner Kaden Cable all the way around the bases. The pitch that scored Cable was also ball four to McKayla Bartley, who also moved to second and third on wild pitches. Nicky Velazquez drew the Trojans’ third consecutive walk and stole second.

Kiley Lyons followed with a sacrifice fly to right to score Bartley, and Velazquez scored on a single by Skyler Lauver. Rily followed with a single to score Lauver, who had stolen second. Suddenly, the Trojans were up 5-0 on 2 hits, 3 walks and 5 wild pitches.

By the time the Pirates managed their only serious rally, the Trojans had padded their lead. The key hit was an RBI triple to left by Terrena Martin that scored Velazquez, who had singled. Rily walked one out later, then took second on yet another wild pitch that scored Martin. Kareena Nelson scored Rily with a single to right.

That made it 8-1 and set the stage for the Pirates’ only serious rally. But after it was over, Rily took a deep breath and held the visitors scoreless over the final two innings, with a little help from a textbook 6-4-3 double play in the sixth.

“I don’t know what happened,” Rily said. “I felt the rough patch, and then I went back in the dugout and just refocused and, yeah, I felt good.”

“A couple of girls started to hit off her, and she just didn’t let it bother her,” Cassondra Lauver said of Rily. “She trusted her defense had her back, and they did. She just kept fighting.”

Rily’s poise was essential on a day no Trojan had more than one hit. She simply did not allow free bases, walking just one batter — none after the second inning — and not throwing a wild pitch. The Trojans also played error-free defense.

The end result is a third consecutive trip to the Class 3A State Tournament for the Trojans, although the feeling is a bit different this time.

“It feels so good to go in as first seed,” Rily said. “I’m so excited for state.”

Pahrump Valley has made 11 trips to the state tournament since 2000 but has not won it all since 2005, the last year of their three-year stranglehold on the crown. The Trojans and Pirates now head to Virgin Valley High School in Mesquite, where Class 3A Northern Region champion Fernley and runner-up Lowry await.

Buckaroos next for Trojans

The first team Pahrump Valley will face in the quest for the state title will be Lowry (19-14). The record is a bit misleading; much like the Trojans’ 11 losses are largely the result of playing up in competition, the same goes for the Buckaroos. Lowry opened the season 0-6, with all of the losses to California schools, and four other losses came to Fernley.

Three more California teams beat them during the season, and the only loss to a Nevada school other than Fernley was a 9-7 loss to Churchill County of Fallon, and the Buckaroos avenged that defeat with a 17-6 rout in the region tournament.

Lowry is definitely more of an offensive team than a pitching team, as the Buckaroos sport a .395 team batting average and a 4.11 earned-run average. Leading the way is Sydney Connors, who has 10 home runs and 62 RBIs and is hitting .560 and slugging 1.190 with a .614 on-base percentage.

Lowry and Pahrump Valley met in the loser’s bracket of last year’s state tournament, with the Buckaroos scoring 6 runs in the sixth inning of an 8-0 victory.

The Trojans and Buckaroos open state tournament play at 7 p.m. Thursday at Virgin Valley High School in Mesquite, after Fernley takes on Moapa Valley at 4:30 p.m.