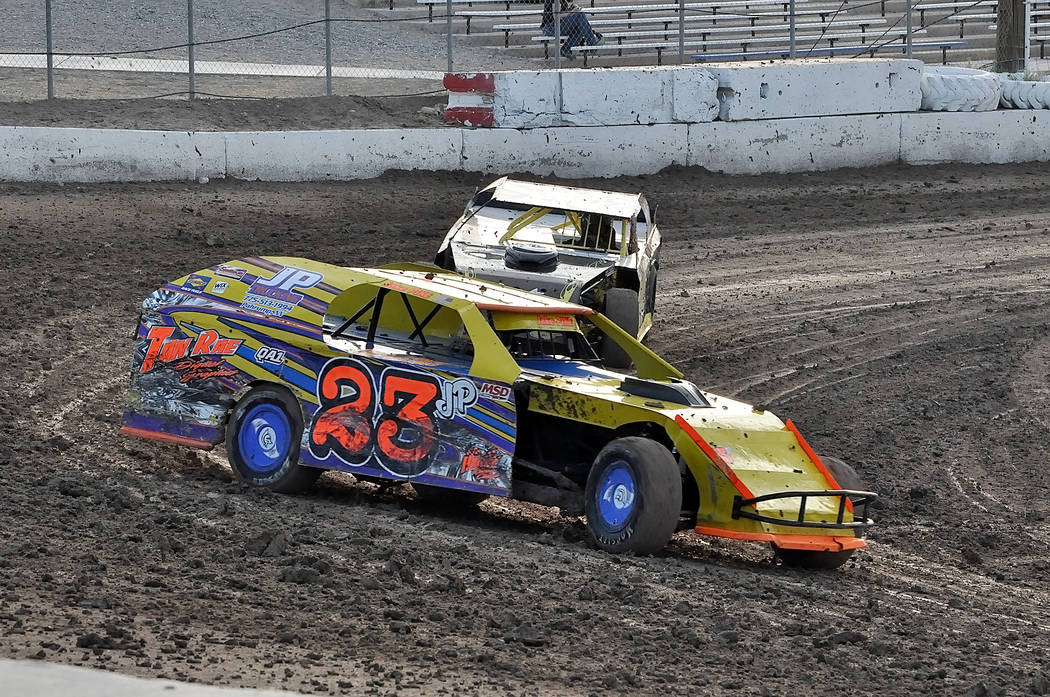 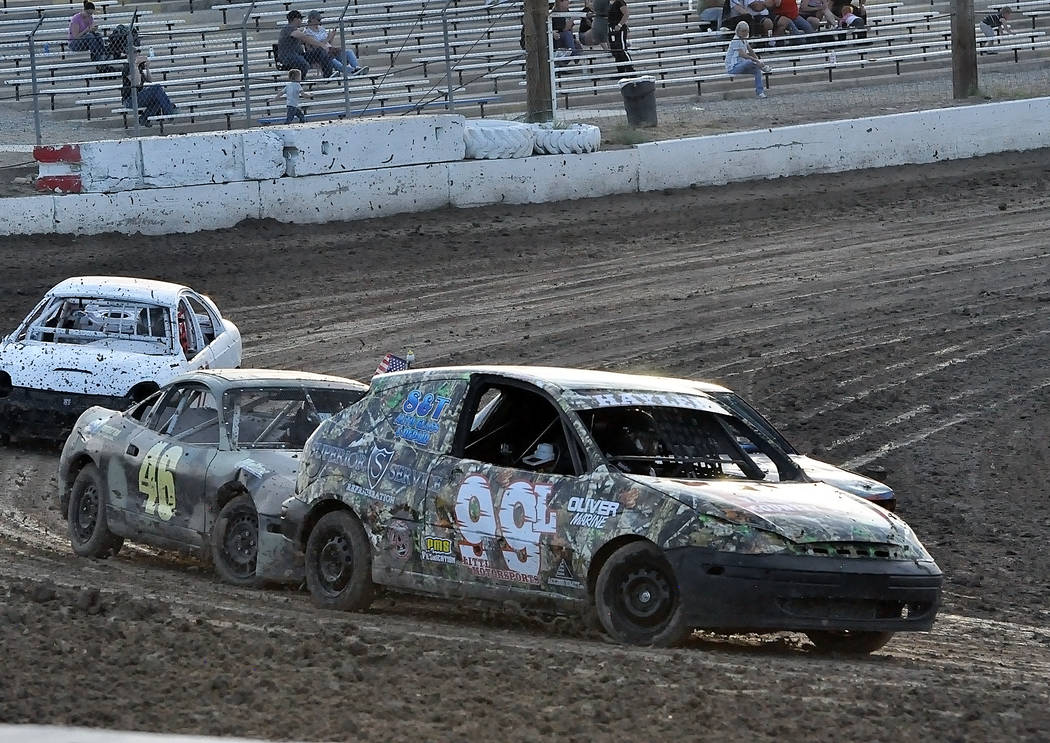 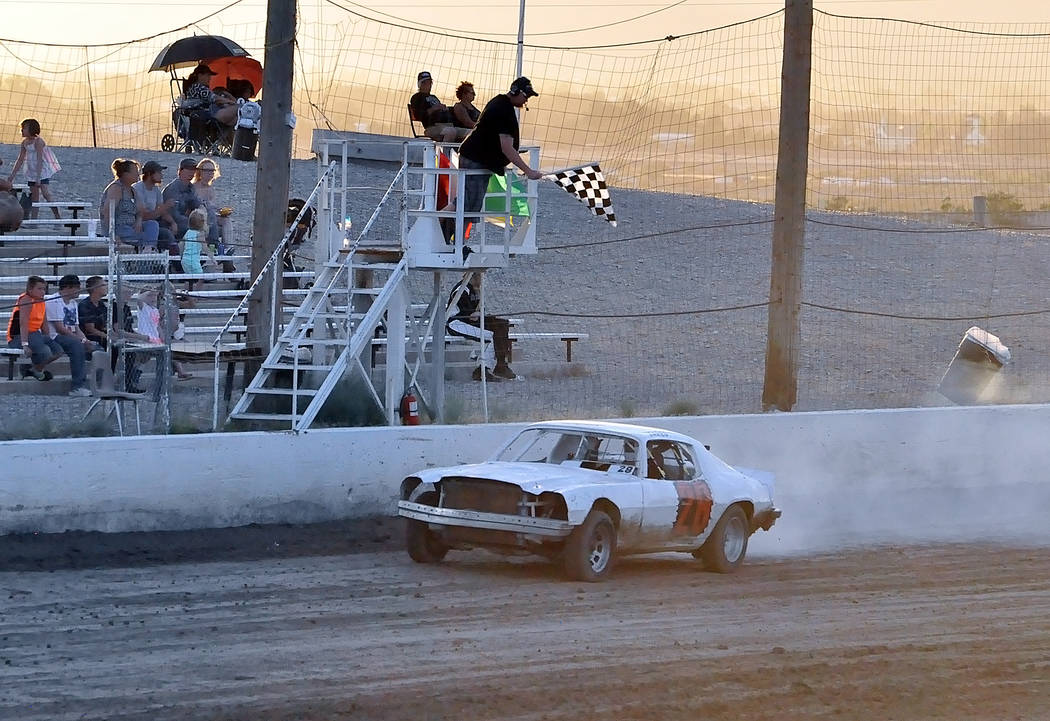 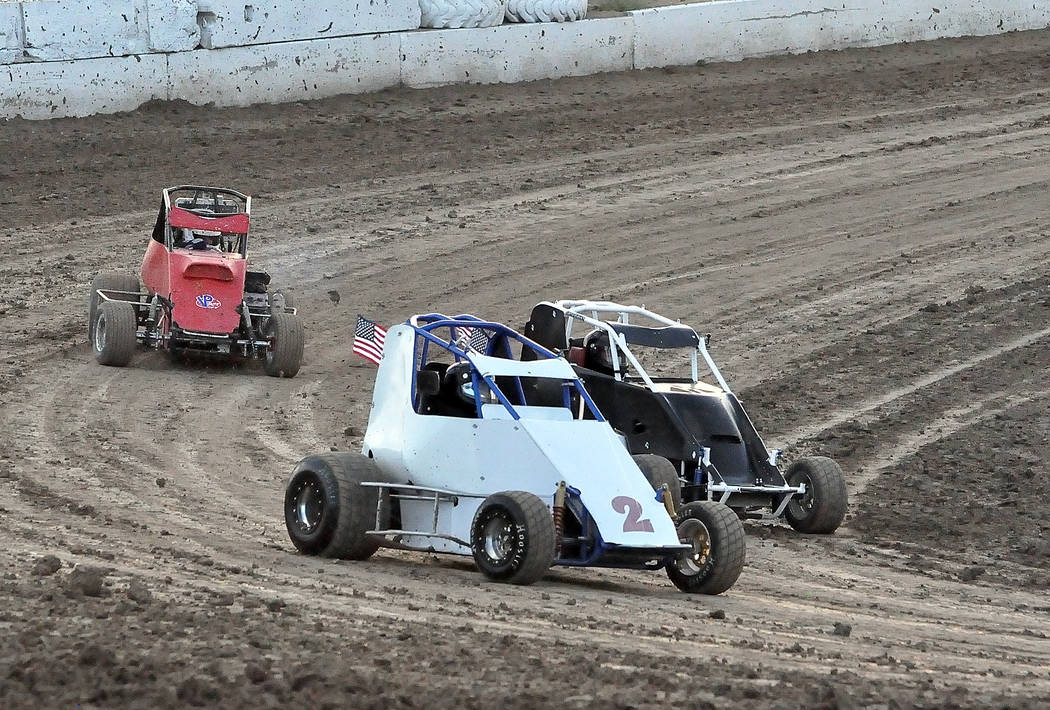 A theme develops wandering the pit area of Pahrump Valley Speedway: The track is not just trying to provide family entertainment, much of the entertainment is provided by families.

In the farthest reaches of the pit area, Jason and Jake Pike were looking forward to Saturday night’s racing.

“This track was built back in ‘84-‘85, and as a kid I was with my dad racing here,” said Jason Pike, who races in the Modified class. “I raced, I watched my dad, and now my son races at 14. It’s kind of like a family event around here.”

Haylee Little has a quick answer when asked how she got into racing.

“My parents,” said the 15-year-old Mini Stock driver. “My entire family has been racing.”

Even track owner Chad Broadhead came into racing with family.

It’s not flashy. It’s not glamorous. The scene from the back of the pit area, with dozens of cars, the dirt track, the stands and the wide-open space beyond in front of the setting sun, is more old-fashioned Americana than cutting-edge entertainment.

And that’s exactly the appeal.

Getting young people involved is a key part of almost any business, and Pahrump Valley Speedway is no exception.

“We’ve got three different divisions, and I think the ages are 5 years to 7 years, then 8 to 11 and 12 to 14, something like that,” track flagman Dale Geissler said. “They race every other week.”

“As they get older, they move up into bigger classes. Most of them are from racing families, but a lot of parents just do it for their kids.”

Some even younger kids hang around the track.

“As a kid, since he was 1 or 2 years old, he’s been around this stuff, watching me race,” Jason Pike said of Jake, now 14. “Everybody’s pretty shocked at how good he’s doing. He doesn’t even have a driver’s license and he acts like he’s been doing it for years. And there are others, 13, 14 years old, out here winning races.

“In Pahrump there’s not really a lot of stuff to do around here for entertainment, and racing was good family entertainment.

“I just love cars and going fast,” said Jake Pike, who added he is as interested in the mechanical part as the racing part. And it’s working: Jason and Jake Pike were first and second, respectively, in the Modified standings at the end of May, Jason in #23 and Jake in #23JP. “I get third or second when I race.”

At 15, Little is winning races.

“I wanted to try something different, something exciting, while also being with my family,” said Little, who previously spent some time in the rodeo arena doing barrel racing.

“I do pretty well each race,” said Little, who drives a 2000 Ford Focus in Mini Stock races and won her event Saturday night. “I try to race clean. I try not to hit people, but sometimes it doesn’t really work.

“We try our best to stay out of drama, we try and stay in our own little group, try not to annoy other people. Everyone does their best to get along and help each other. Even though someone might wreck each other, they’ll try and still be friends.

“My favorite thing about it is the rush that you get, how much fun that is,” she said. “In the middle of the race is when you really get the rush going because then you’re all excited, like, ‘I’m in a good spot. I might win.’ ”

Not every driver at Pahrump Valley Speedway is waiting to get a driver’s license, of course. There are wily veterans around always willing to teach the younger drivers a few lessons.

Jared Ward has been around the track, well, from the beginning.

“I helped build the track back in the mid-80s,” he said. “I raced down here for a long time.

“There’s not near as many cars as there were 30 years ago, but that’s all right. One race there was only a couple of cars, but there’s usually five or six. In one race we had eight cars, for hobby stocks.”

Ward began racing before there was a Pahrump Valley Speedway.

“We used to go to Craig Road when we were just out of high school, and in high school, back in the early and mid-1970s,” said Ward, who has lived in Pahrump for 50 years and went to school in town.

Despite his decades on the track, Ward is as competitive as ever.

“I’m getting kind of old,” he said. “These young guys got me on the eyes and reflexes, but that’s OK. Age has taught me a few things.”

Apparently. Ward ended May leading the Hobby Stock points race, and he won Saturday night in his #28 1974 Camaro.

Another veteran driver is Gary Wyatt, who did not get the early start some of the other drivers had but who has been on the tracks for 19 years. The Las Vegan in his #65 won the Bomber main event Saturday, but he is better known not for ending May as the class points leader but for his stickers memorializing the Oct. 1, 2017 shooting at the Route 91 Harvest country music festival.

A smaller version of the sticker can be found all over, courtesy of Wyatt.

As for the racing, Wyatt’s attraction to Pahrump Valley Speedway is pretty straightforward.

“The dirt. I like the dirt track,” said Wyatt, who said he races in the Bullring, the short track at Las Vegas Motor Speedway, four to five times each year. “The next closest track is in Tonopah (174 miles north) and then there’s one in Mojave, in Arizona (171 miles southeast).”

“We had a gentleman, Russ Wilson, that raced here, 90 years old,” Broadhead said. “He raced here until he passed away. It’s not just a young man’s sport. Myself, I’m pushing 60, and I still try and race in three or four divisions myself.”

Whenever anyone at Pahrump Valley Speedway talks about the past, invariably two names pop up.

“Kurt and Kyle Busch started their racing career right here,” Broadhead said. “We do have high-caliber drivers coming through here. You’ve got the Pikes, you’ve got the Wulfensteins, you have the Murphys coming up. You have the Snowdens and the Buesigs. These are big families that race, and they come out and support the track.”

Broadhead, who first visited the track while campaigning for Mel Jackson for sheriff a decade ago, said the track needs 55 to 60 cars a week. “If we have under that, if we have 40 cars, we don’t have a lot of fans. And without the fans, you can’t keep the gate open.”

Saturday night’s card brought out 48 cars between the nine classes, according to Geissler, the flagman.

“We race 22 times a year,” Broadhead explained. “We’re almost halfway through our season. We end at the end of November and have December and January off. If you want to keep the track open, you have to have a full season. You’re looking at $4,800-$5,000 just to open the gate.

“We want to try and get more people to come to the track. We’re looking for the spectators to come out and enjoy a night in the stands, enjoy our cool beverages, some of our sandwiches and food we have to offer. We try and put out a very good product. It’s just a good family night. Where else can you go in town, take six people — mom and dad and four kids — for $30. We have a family package for $30, and you can watch four hours of racing.”

A single adult ticket is $10, $8 for those over 55. Those aged 6 to 14 get in for $6, with younger kids free. A season pass is available for $180. For that, spectators get an evening of races that starts at 7 p.m. and sometimes can run until near midnight. “I love this place, I love the fans that come here, and especially the drivers,” he said. “These guys don’t know how much I truly have in my heart for them. These guys are amazing. They are unbelievable. I can’t say enough about them.”

The drivers are paid out of the entry fees they put in, Broadhead explained. And some of what’s left over is donated to service organizations in Pahrump, as he citing the Boy Scouts and the Veterans of Foreign Wars, among others.

“People think we make a lot of money here, but we don’t,” Broadhead said. “We just barely make enough to keep the gates open.

“This is an old track, it’s one of the first things that ever was here in this town, and we’re trying to keep it alive.”