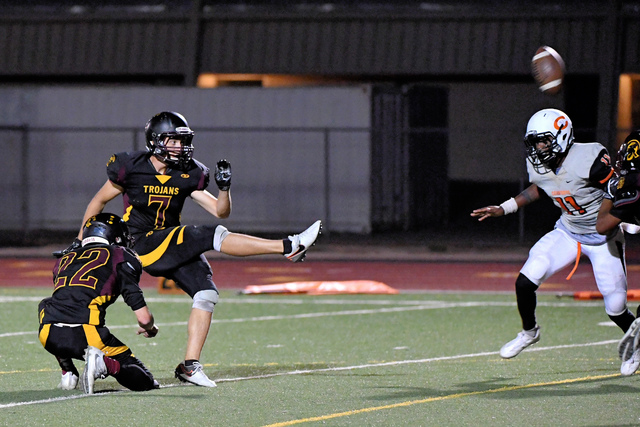 The kick is up and good for Joey Sladek during the Trojans game against Chaparral this year. Sladek’s service application was also good as he was accepted into the United States Air Force Academy. Peter Davis / Special to the Pahrump Valley Times 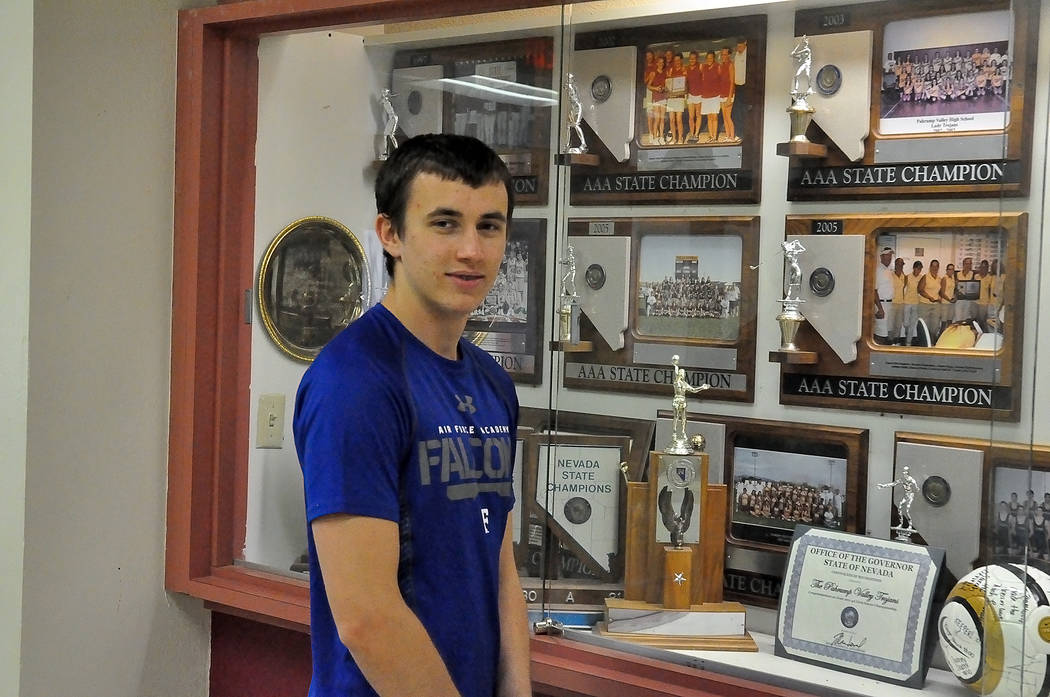 Joey Sladek admires the trophies in the trophy case at Pahrump Valley High School. The senior kicker will be entering the Air Force Academy in the fall. He was accepted on Dec. 3. Horace Langford Jr. / Pahrump Valley Times

Pahrump Valley High will send another student to one of the nation’s military academies. Senior Joey Sladek Jr. was accepted to the United States Air Force Academy on Dec. 3.

Sladek, who was a kicker on the Trojans football team, is the second service academy appointment from Pahrump Valley High, the first being Tommy Gascoigne last year, who was accepted to West Point.

He got the news right after his nomination in November by U.S. Sen. Harry Reid and then-Congressman Cresent Hardy.

“I remember being sick and so I was up because I couldn’t sleep,” he said. “It was 3 a.m., and I was checking my email and I saw that I had been accepted. I ran down and had to wake my mother up.”

He said that weekend, good news overwhelmed his family. His older sister, Sydney Sladek and the soccer team she plays for, the USC Trojans, had just won the national title.

“We had to put off celebrating my getting accepted for another weekend because my dad was at Sydney’s game.”

Sladek said he started pursuing his dream in his freshman year at high school.

“When I was growing up I thought I wanted to be a doctor,” he said. “But I realized that wasn’t for me. I also like planes and the military. I started doing research about the military academies during my freshman year and chose the Air Force Academy.”

Sladek’s football coach, Joe Clayton, was not surprised by the nomination.

“Joey has a desire to succeed, whether focusing on his kicking game or his academics,” Clayton said. “He is intrinsically motivated all of the time. I knew when I took over the program again last year that he was our guy, our kicker. And man, he didn’t disappoint…He constantly worked on his craft, even working with Nolan Kohorst, a four-year UNLV starting kicker from Green Valley High School in Las Vegas, in the offseason.”

The coach said Sladek talked about his dreams from the start of football.

“Joey told me from the first day of summer workouts that he wanted to go to the Air Force Academy so immediately I was excited to support him,” the coach said. “I had no doubt considering he was working hard to be the class valedictorian in 2017 at Pahrump Valley High School. So when I found out he was accepted to the Air Force Academy recently, I couldn’t have been happier for him. And it didn’t surprise me.”

Sladek grew up here in Pahrump with two older sisters, Haley and Sydney. When Joey Sladek Jr. was in middle school, his sisters were home and he said the competition among them was fierce.

“When we were all home, I played soccer in middle school and my club team would play my sister’s club team and there was constant competition to see whose team could beat who,” he said. “We fought all the time and we all were highly competitive to see who was the smartest. There was this competitive separation back then but now we are much closer. It has been interesting being the last one to leave home. It has been very lonely being the last one.”

The one thing he will never forget is all the love and support his two parents have given him. He stressed the fact that without their parenting, he would never had made it.

“I have seen over the years what happens to some kids when one parent is missing,” Joey Sladek said. “I have parents who are goal-oriented and supportive. The support has helped me to become the independent person that I am.”

His father, Joe Sladek Sr., is excited for his son.

“We are the proudest parents ever,” Joe Sladek Sr. said.

As far as his advice to others interested in getting into a service academy, Joey Sladek Jr. says set your goals early.

“You can’t just say your junior or senior year that you want to get into a service academy,” he said. “If you really want it, set your goals early. You’ve got to start early.”

And will he walk onto the football team as a kicker for the Air Force?

“I am getting a lot of pressure to do that,” he said. “I will continue training for it. Doing something that I like doing might give me some peace of mind during my first year there.”