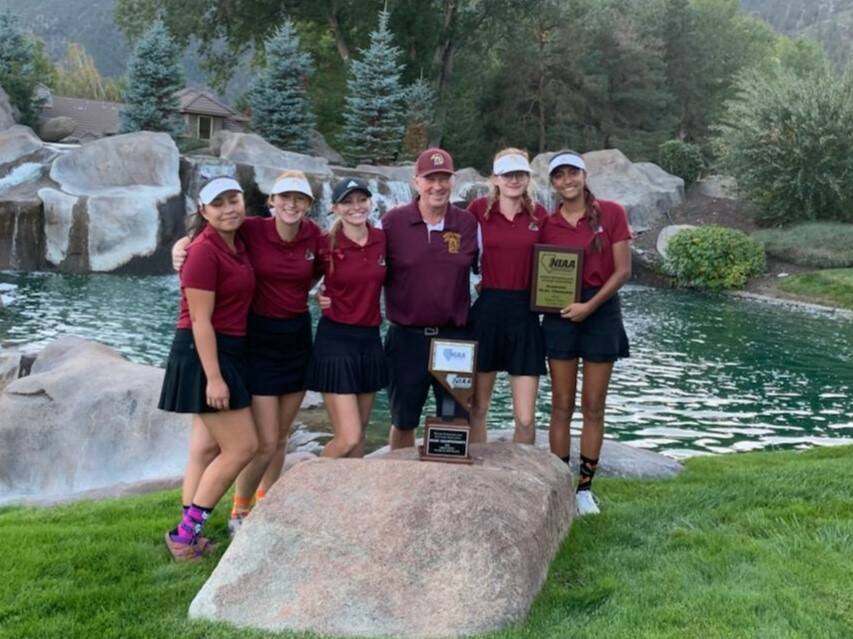 This is the Trojans’ fourth consecutive second-place finish in the team portion of the girls golf championship. They finished with a team total score of 754 strokes.

“I was pleased for the most part with my girls’ play,” Pahrump Valley head golf coach Bob Hopkins said.

Hopkins also mentioned that he believes his team will be able to contend for the state championship again next year with the return of three of his five state golfers.

On top of finishing as the second-best team in the state, the Trojans were also named the Nevada State Academic Champions with a team grade point average of 3.78.

Pahrump Valley entered the state tournament as the top team from Southern Nevada after winning the regional championship by 58 strokes.

The Genoa Lakes golf course is an 18-hole, par-72 course.

Aliana Zuniga led the Trojans both days of the tournament, turning in scores of 88 on the first day and 87 on the second day for a 2-round total score of 175.

Her tournament score of 175 was good enough to finish tied for seventh place in the individual score competition.

Emily Gent finished tied for 11th place in the individual portion of the tournament with a total score of 180 strokes. She scored rounds of 91 on Monday and 89 on Tuesday.

Gent was followed by Shania Hopkins and Sasha Strain.

The fourth and final Trojan to finish the tournament was Sasha Strain, who ended her tournament tied for 20th place and a final score of 207.

Strain shot scores of 106 in the first round and 101 in the second round.

Gracie Tilley began the tournament for the Trojans, however, she suffered a wrist injury during the first round and had to withdraw from the competition.

The girls’ season is now over and coach Hopkins will be shifting his focus to girls basketball for the winter season. He’ll be back on the links in the fall to coach Pahrump Valley’s boys golf team.