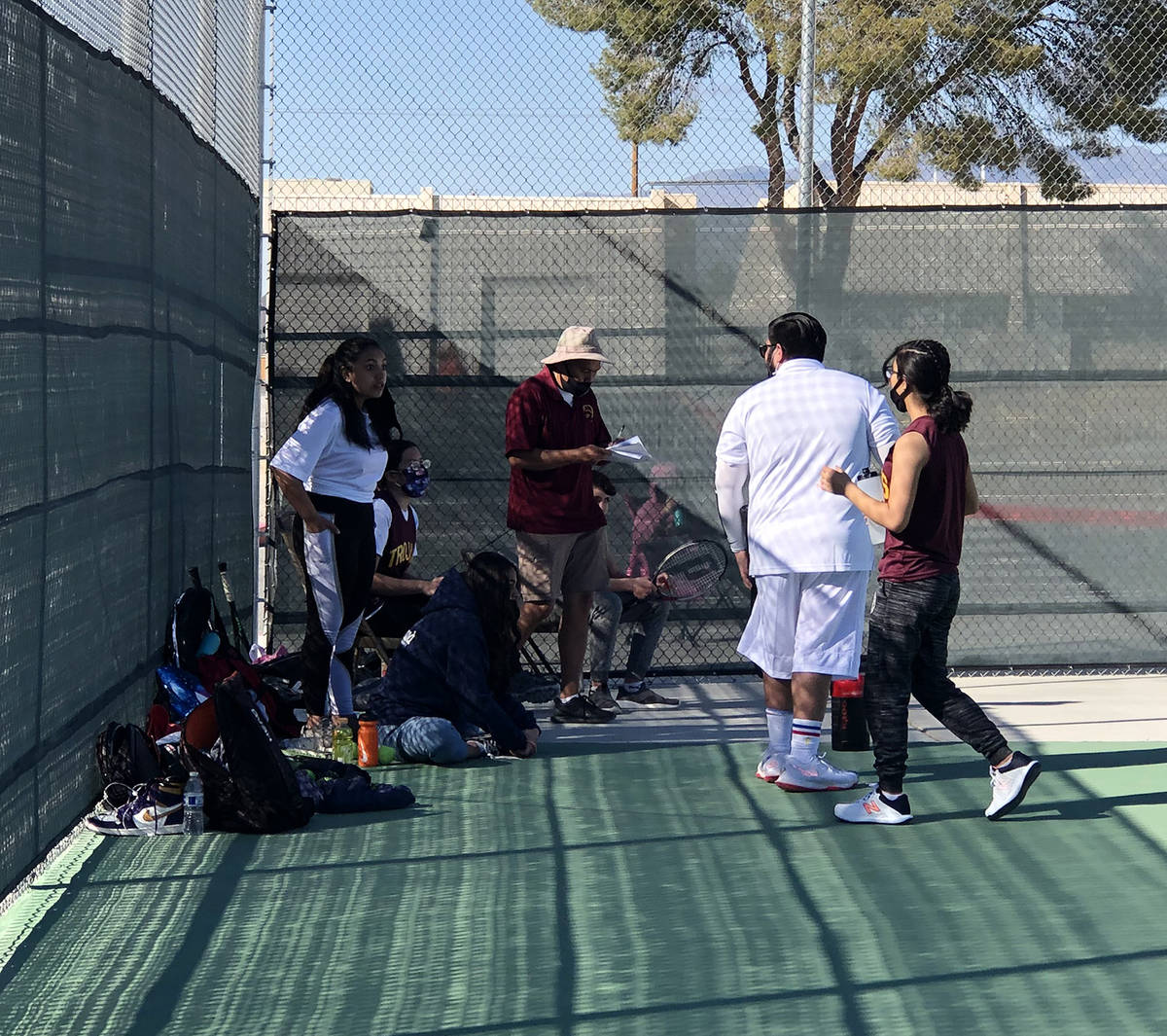 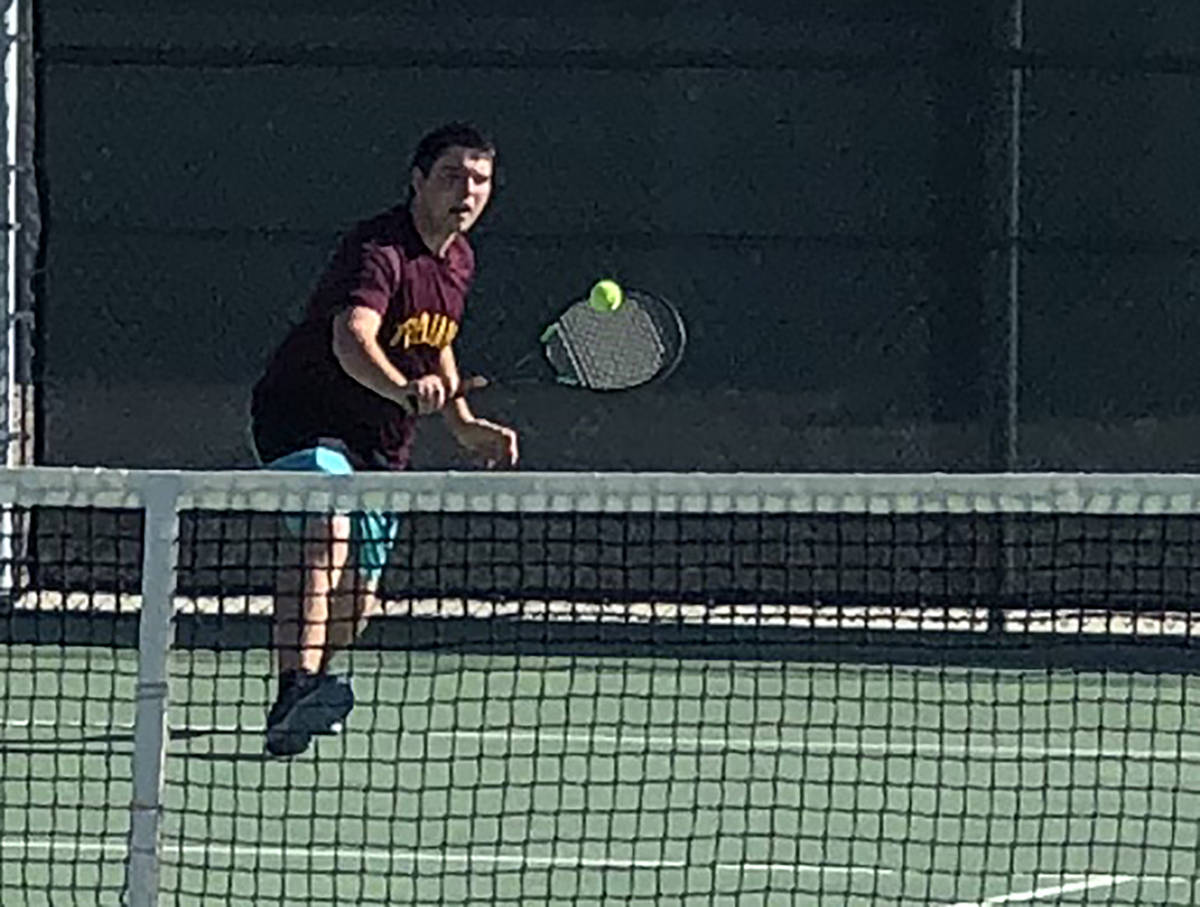 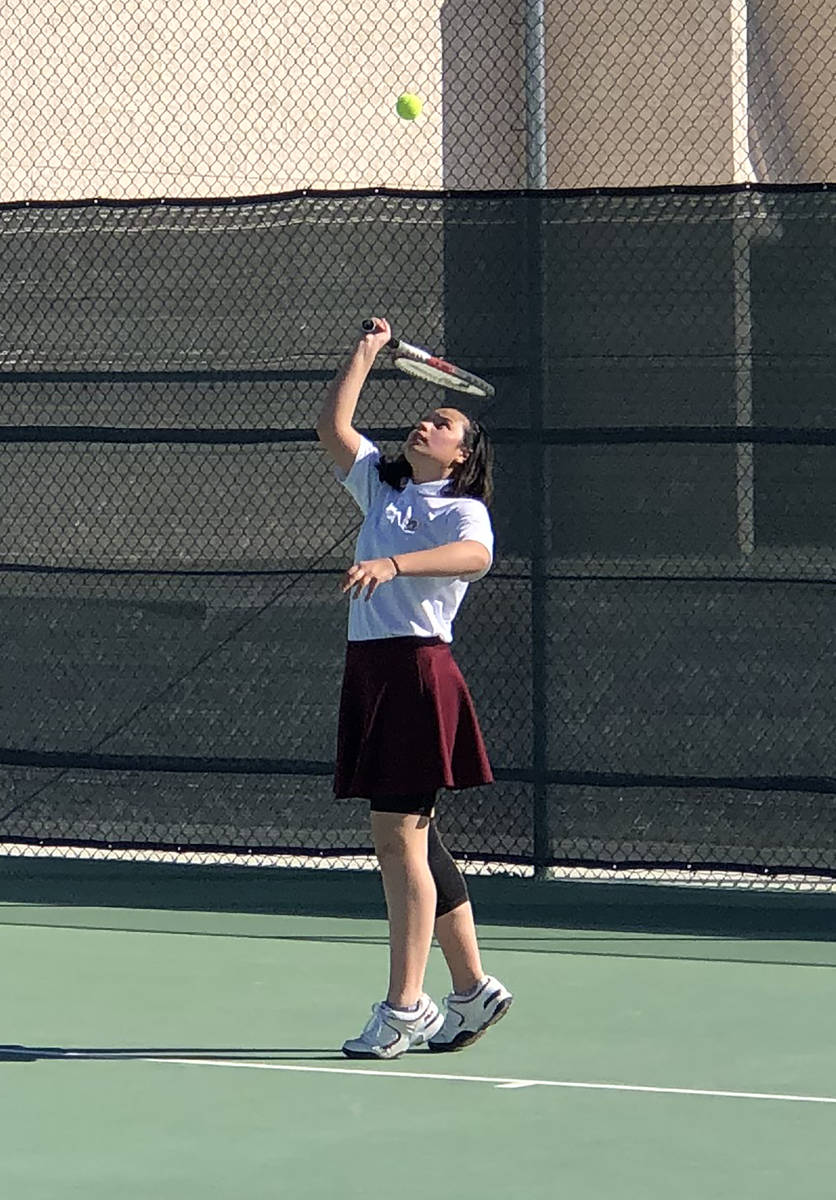 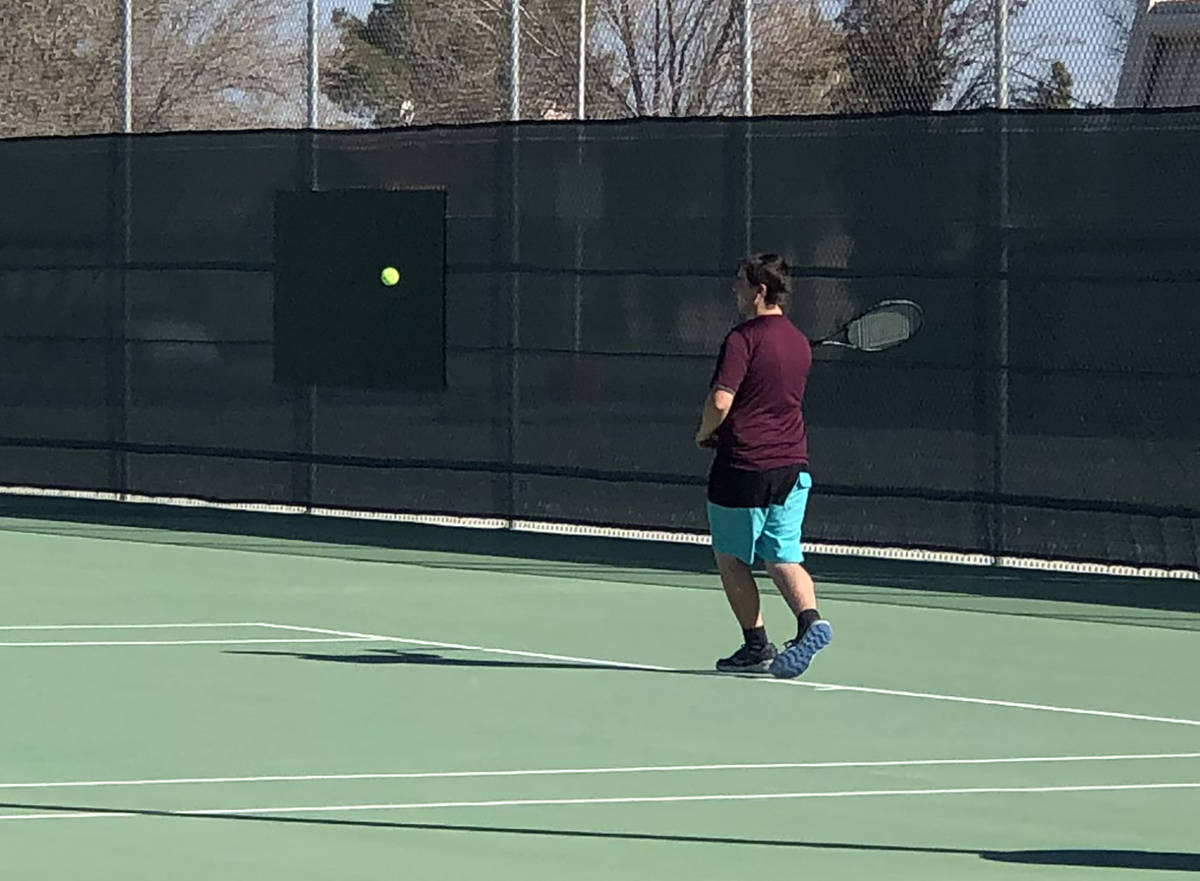 For the third consecutive year, it seems necessary to make an announcement: Pahrump Valley High School has a tennis team.

Dela Rosa has been around the Trojans before. His daughter, senior Veronica Dela Rosa, has been a mainstay of the team since its inception, and this year her twin sister Mikayla, is playing as well.

“She didn’t want to play the other years, but we were so low on players, we convinced her,” Veronica Dela Rosa said. “She gets tennis elbow, which is why she didn’t play, but we’re just going to have her in as long as she can.”

Dad sent them out to play doubles together against the Pirates, which Veronica reported to be a close 6-4 loss. Technically, the match went down as a 12-0 loss, simply because Pahrump Valley did not have enough players to fill out the lineup.

“We have more boys than we did last year, because we only had two boys last year,” Veronica Dela Rosa said.

One of the boys on the team is Juan Nava, a newcomer to the sport.

“They needed a couple more players, so I figured why not?” Nava said. “I really like the team atmosphere. I’ve only been playing for one or two months, but I’ve been coming to practice and working really hard, and I think I’m doing a lot better.”

“Serving is what I picked up the fastest. I really struggled at first.”

Veronica Dela Rosa had the most tennis experience when the program started, and that remains the case. Having her father coach the team is not a big deal to her.

“He taught me how to play,” she said. “He had me pick up a racket when I was 4. I learned serving from my other coaches.”

On the other end of the spectrum is Rasmussen, who, like Nava, has just a few weeks of playing experience.

“I’ve been out here a couple of months,” Rasmussen said. “Once I heard the high school had a tennis team, I figured I might as well join.”

The freshman reported having a solid first set of the day against the Pirates.

“I think I did pretty good,” she said of her 6-4 result. “It’s close, but I won. It seemed like she aimed at me, and it was difficult to move out of the way sometimes.”

But it wasn’t difficult enough to discourage her, and Rasmussen said she expected to continue playing tennis throughout high school.

Veronica Dela Rosa would like to see that, not only because her father is the coach but because she was in at the beginning of the program.

“I think all of the kids on our team have potential, especially Maya, Jasmine (Staples) and Anthony (Luca),” she said. “I’m having a great time.”

That’s not always easy to do on a team with growing pains, as it seems as if every year most of the roster picked up a racket for the first time yesterday.

“Out of 11 players, eight are new to the sport,” Mike Dela Rosa said. “I try to encourage them to just try hard and enjoy it.”

That part seems to be working.

The Moapa Valley match was the Trojans’ first of the year, losing one match to COVID-19 and another to bad weather. This was supposed to be their first season playing a regular Class 3A South schedule after playing an independent schedule their first two seasons.

The Trojans are scheduled to pay a return visit today to Moapa Valley, then face Bishop Gorman, Virgin Valley and Lake Mead Christian to end the season.