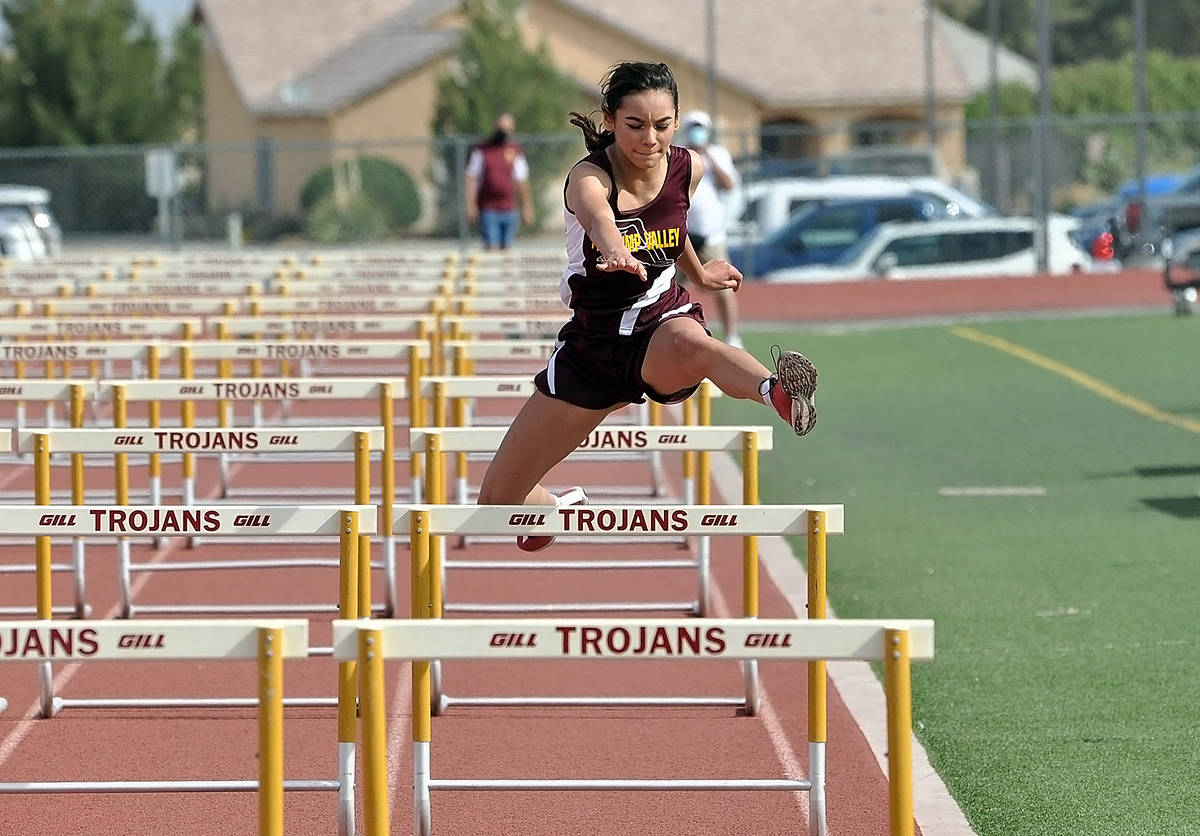 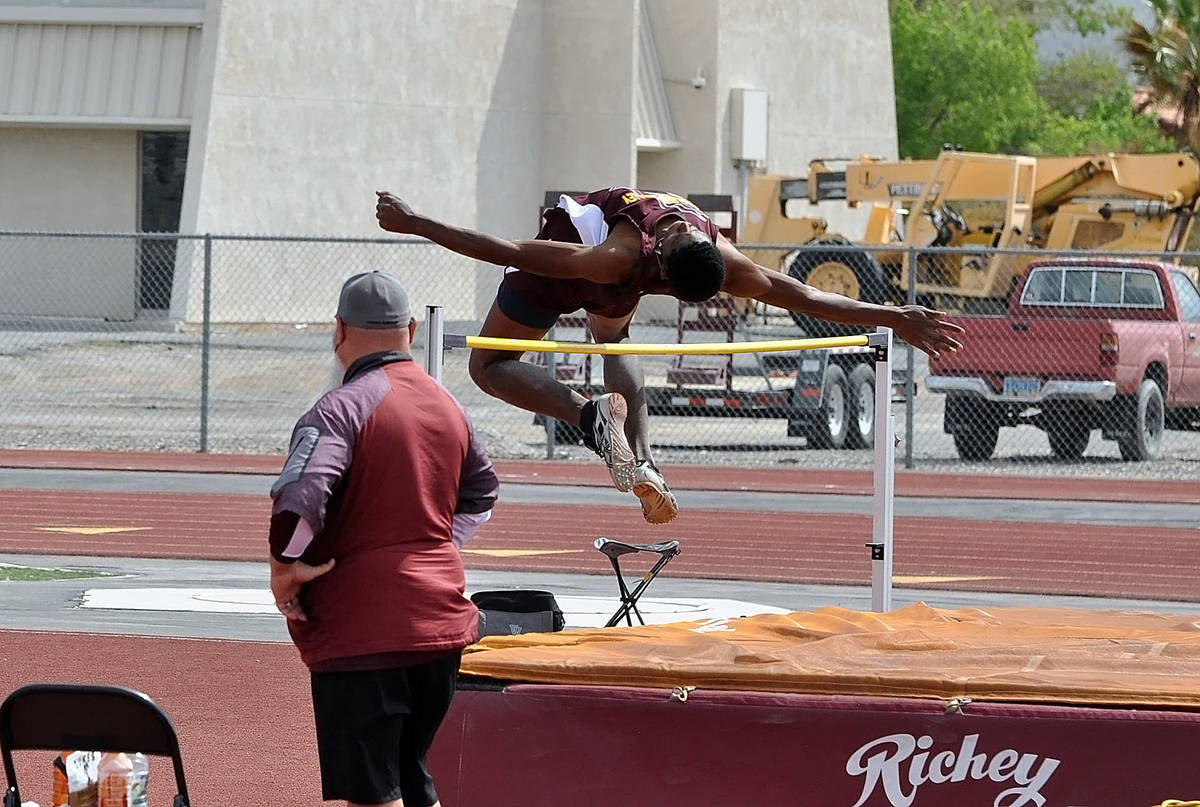 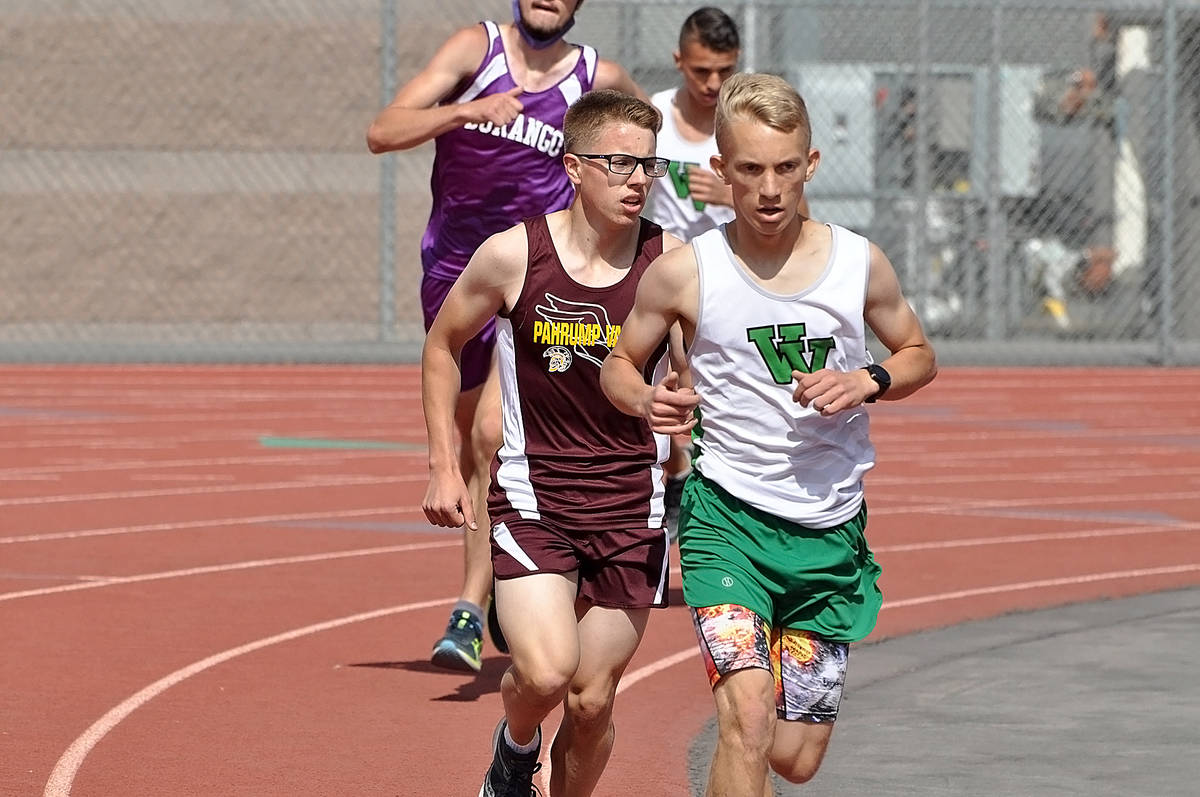 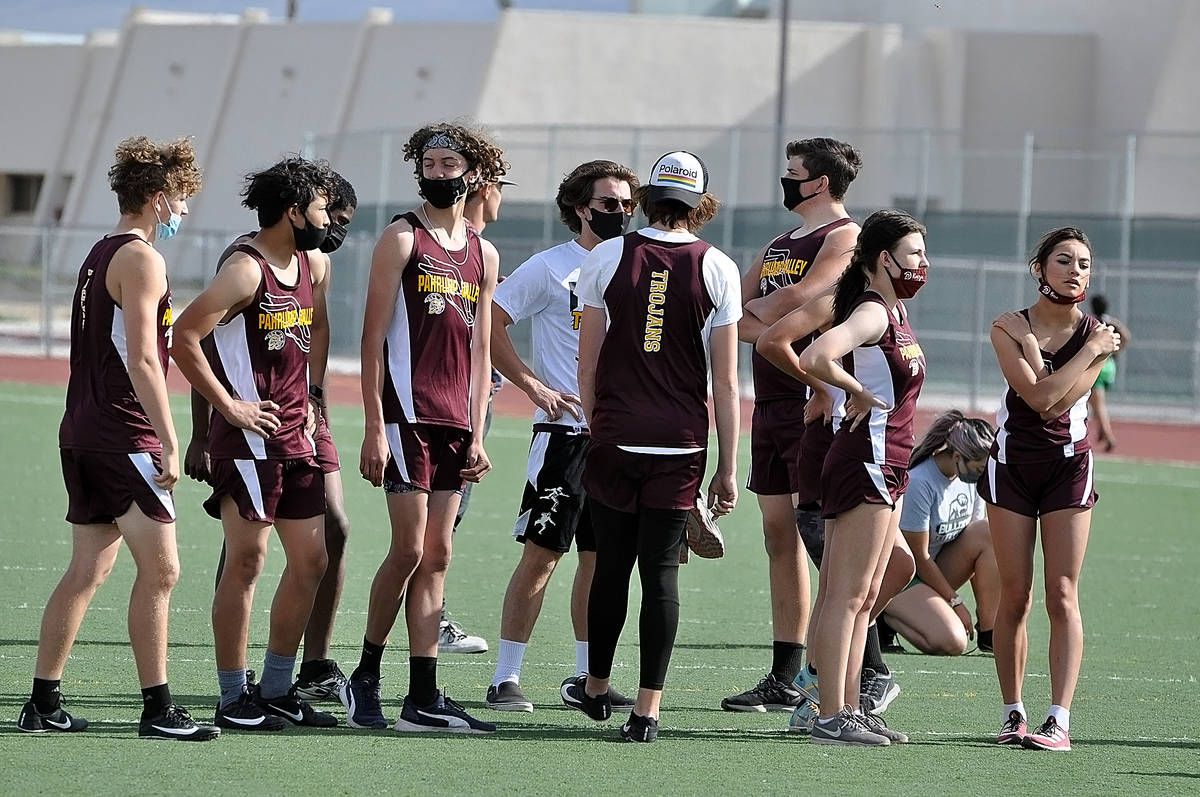 This year, with no state championship meet and a regional meet only confirmed Saturday morning, track season has turned into an extended practice for underclassmen and a long-term gym class for the seniors. But even before athletes found out there would be a region meet May 21-22 at Moapa Valley, many of them came out for track simply because that’s what they do.

“I originally came out in track my sophomore year to hang out with my friends and keep myself in shape for my other sports,” senior Logan Gavenda said Saturday as the Trojans hosted a meet with Durango, Sunrise Mountain and Virgin Valley. “Coming into this season I’ve been working full time and I’ve been kind of in a rut, so I just figured I’ll go out and hang out with my friends one last time before the year ends.”

That sentiment was echoed by Makayla Gent, who plays soccer and basketball and runs distance races for the track team. Or at least she did.

“I’m doing sprint relays,” Gent said. “I’ve done distance in the past, but it’s a weird year as it is so I might as well try something new, and I like team events.

“I feel like this year more than anything is about having fun. This year has been a downer, and I don’t need to stress myself out. I just wanted to have fun with my teammates. We have a great time, we laugh at practice, it’s awesome.”

Not so awesome was the hip flexor injury suffered by senior Rance Bill, who spent some time lying on his back on the turf with ice on his thigh.

Despite the injury, Bill had not soured on going out for track during his final months in high school.

“Track just makes yourself better, just helps an athlete really improve,” said Bill, a wide receiver for the football team. “For younger athletes coming back, it helps them prepare for their other sports.”

Not having a state meet to prepare for didn’t change anything for Bill.

“It’s still the same, coming out here to have fun and improve.”

One person who wishes more PVHS student-athletes felt that way is Craig Rieger, the school’s longtime wrestling coach who is an assistant in football and track, handling the distance runners.

“We don’t have as many kids out this year, and I don’t know why,” said Rieger, both coaching and watching his sophomore son Alex compete Saturday. “I don’t know why a cross country runner wouldn’t come out and run distance in track back to back. Why wouldn’t our soccer kids roll right out of soccer and do their club but also run sprint or distance for their school? It would be an easy transition.”

Rieger is a competitor, and the notion of not wanting to compete is foreign to him. But head track coach Fred Schmidt, while not necessarily liking the situation, is a bit more understanding.

“Obviously, the easy answer is this COVID madness,” he said. “I think a lot of kids are looking at the fact that it’s a short season. We have about half the numbers we normally have … and I think we have a lot of seniors that graduated early.”

Younger athletes have come out for track, and the coaches have taken notice.

“This 4 x 1(00) relay, we’ve got four freshmen,” Rieger noted. “We’ve got a freshman girl distance runner, two of them actually, that are good. One’s injured and one’s doing soccer, which is fine. I think the club soccer thing is awesome. And she communicates.

“I think we have more athletes, but it’s a question of why they don’t compete. If you’re a competitor, you’re out here. It’s a sport in which you can get faster, and in all other sports it’s good to be faster.”

Schmidt also said the early reviews on the freshman class are positive.

“We have some good hurdlers and high jumpers,” he said. “In the long jump, we’ve got a good freshman group of kids. Freshman boys sprinters have really taken ownership of what they do, and they’re working hard.”

One of those new sprinters is freshman Triston Church, who was competing in his first track meet Saturday, although he acknowledged not having postseason meets changed things for him.

“I’d say so,” he agreed. “I’m doing track because it helps me get better for next season. You’re not competing to get to the state finals, so if anything it’s training.”

Church finished second in the 100 at 12.0, one-tenth of a second ahead of Gavenda. He also ran two relays and competed in the long jump.

“I needed another thing to do other than just running,” he said. “It’s not that hard. It’s pretty relaxed. I’m mediocre at it. It was either that or high jump, and high jump didn’t look that fun to me.”

Benedict has run track before, competing in sixth grade before being sidelined a year later with a broken arm. He teamed with Johnny Reddick, Reynundo Cortez and Brandon Ondrisko to win the 4 x 200 in 1:45.6 on Saturday while also competing in the long jump and high jump.

“I’m not too good at high jump, but I’m all right,” Benedict said. “In long jump I did pretty good today.”

For the record, Benedict’s high jump was 5-0, which placed fourth, and his long jump was 17-0, good for third.

“Triple jump is my favorite, I don’t know why,” Gavenda said. “I dropped everything to learn that sophomore year, and that was just a blast to learn.”

“To be honest, for a second I wasn’t going to do track, but then I’m like, it’s my senior year, I’ll just finish strong because I’ve done three sports all four years,” she said. “If anything, it will keep me in shape and active, and I just want to have fun with my teammates one last time.”

One last time before she goes off to Brigham Young University in Provo, Utah to study exercise science, planning a career in physical therapy. Bill is headed to Dixie State University in St. George, Utah to study engineering, while Gavenda plans to continue working for Best Bet Products, a Pahrump-based casino vendor.

But, thanks to the news that came down Saturday morning, the trio — if healthy and qualified — will wrap up their high school athletic careers at the Class 3A Southern Regional Championships in Overton.

“I’m glad they’re doing a regional,” Schmidt said. “It’s good, especially for the upperclassmen, gives them something to compete for.”