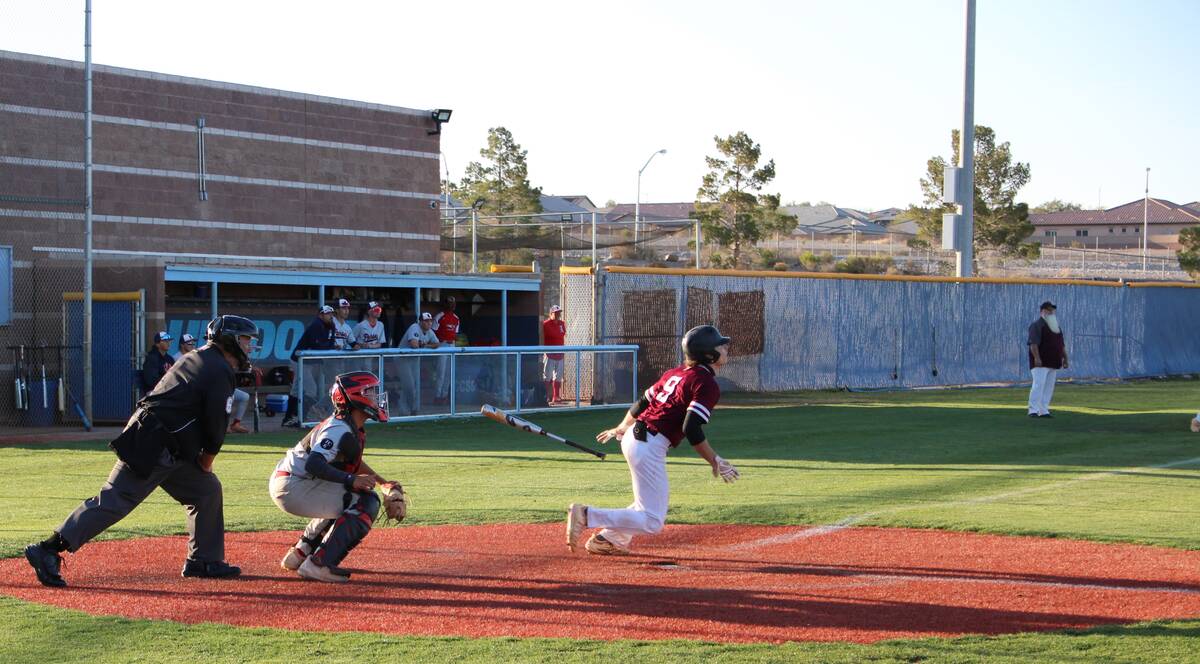 Danny Smyth/Pahrump Valley Times Pahrump Valley senior pitcher Zack Cuellar (7) delivering a pitch while his teammates look on in the background during the Trojans' game against the Liberty Patriots on Wednesday, April 13, 2022. 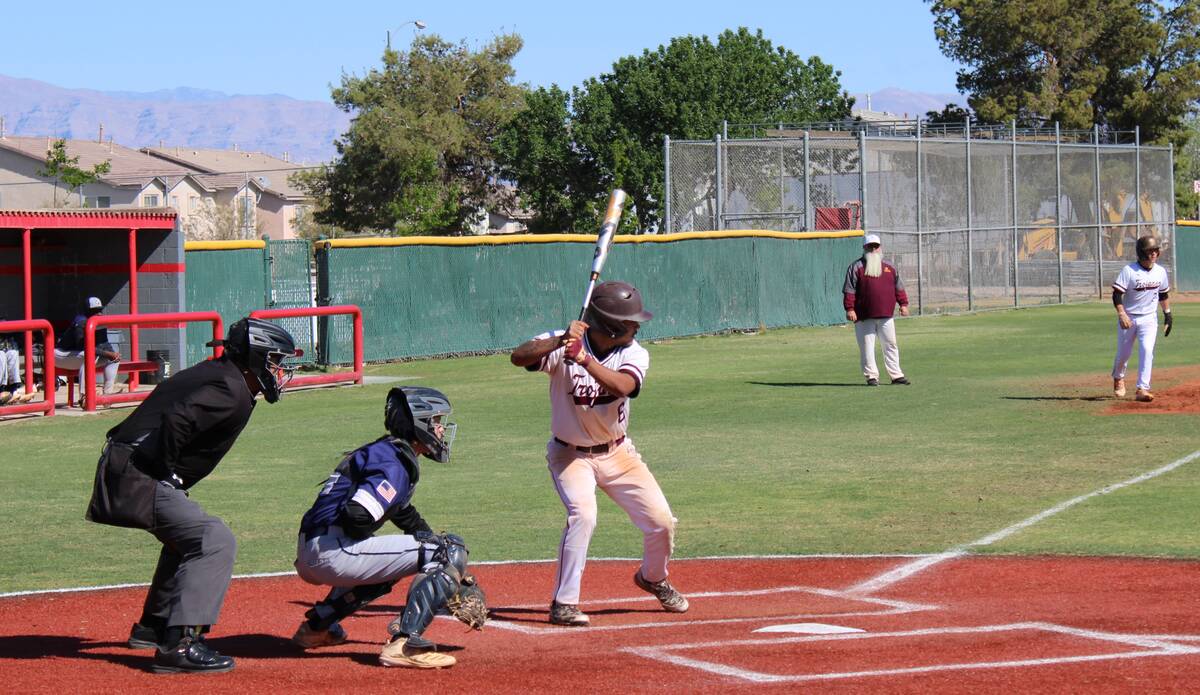 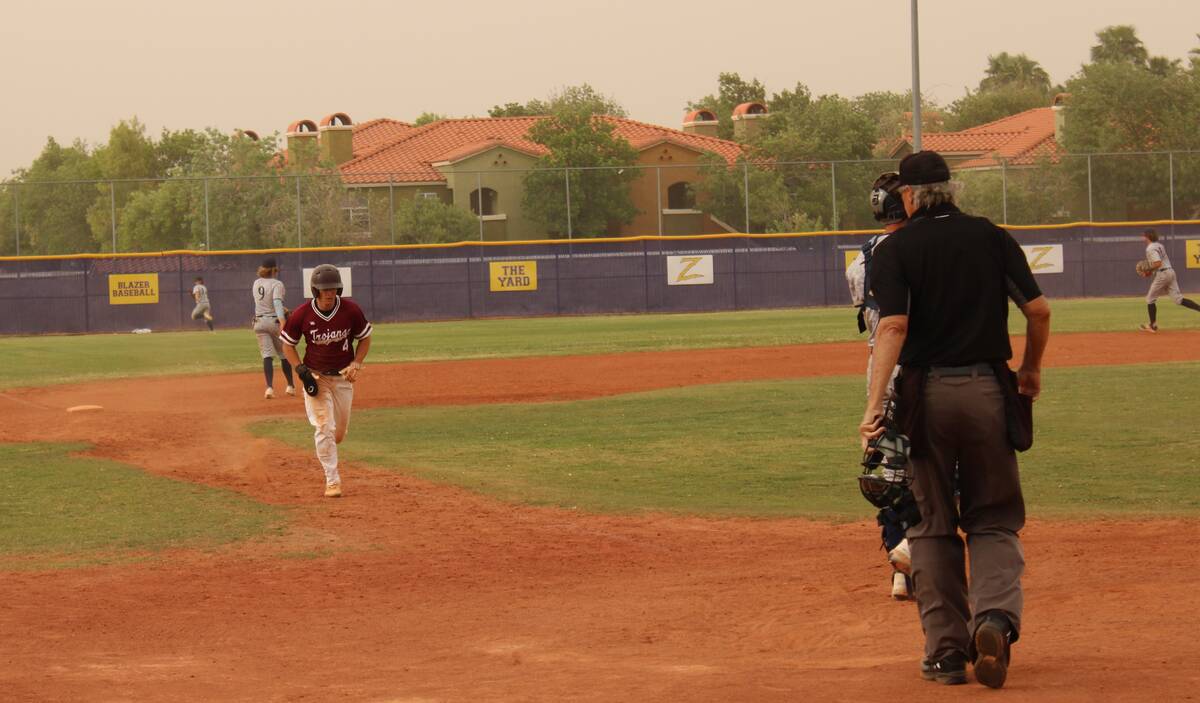 The Pahrump Valley Trojans baseball team participated in a tournament in the Las Vegas area over these last three days.

The Trojans played four different opponents over the course of the tournament. All of their opponents were from divisions higher than their own.

Pahrump Valley participates in the 3A division. Three of their opponents – Foothill, Durango and Shadow Ridge – participate in the 4A division throughout their season. Liberty, the team’s final opponent in the tournament, plays in the 5A division.

The beginning of the tournament was rough for the players in terms of weather. The Las Vegas Valley was having one of their windiest days ever, some places had wind up to 50 miles per hour and gusts were even stronger.

Some parts of the valley weren’t drivable because the wind was so strong that it was lifting dirt and sand into the air, making it tough for people to see long distances in front of them.

That didn’t matter, there was baseball to be played.

The Trojans kicked off their tournament with a doubleheader against the Foothill Falcons and the Durango Trailblazers.

The Falcons entered the game with a 13-7 overall record on the season and were coming off a 13-12 tournament-opening win against the Carson Senators.

Fidel Betancourt got the start on the mound for the Trojans. He pitched 5 1/3 innings of solid baseball. Betancourt gave up five runs on nine hits while striking out six batters.

Juniors Kyle McDaniel and James Metscher both had a great game for the Trojans on offense. They each finished the game going 4 for 4.

Betancourt helped himself on the base paths as well. He finished the game going 2 for 4 with two RBIs and scored once.

The Trojans went on to defeat the Falcons easily by a score of 14-6.

Directly following the game against Foothill, Pahrump Valley had to play against their hosts, the Trailblazers.

This game didn’t go so easy for the Trojans.

Scott Hirschi got the start at pitcher for Pahrump Valley in the end of the doubleheader. He pitched well until the fourth inning. Hirschi pitched 3 2/3 innings, giving up five runs on three hits and striking out four batters.

The Trailblazers entered the bottom half of the fourth inning with just a 1-0 lead. By the time their half of the inning was over, that lead was stretched to 5-0.

The Trojan bats were tamed by the Trailblazer pitchers throughout the game. Pahrump Valley only recorded four hits, two of those by senior outfielder Henry Amaya.

Both of Amaya’s hits went for doubles, finishing the game going 2 for 2 with two doubles, one RBI and scored on a wild pitch.

Durango went on to defeat the Trojans by a score of 5-2.

Following the game, Pahrump Valley had to make the just-over-an-hour drive back to Pahrump to rest up. At the crack of dawn, the Trojan players were back at the high school to catch a bus heading back for the Las Vegas area.

Tuesday’s game had a 9 a.m. start time. The game between the Trojans and the Mustangs from Shadow Ridge was played at Las Vegas High School.

Now, I’m not sure if any of you have ever been to Las Vegas High School, but it’s as far east in the valley as you can go before you start climbing up a mountain.

That means the Trojan bus had to drive from Pahrump Valley High School to the furthest eastern point of the Las Vegas Valley with enough time for the players to warm up before the first pitch at 9 a.m.

That trek is, at a minimum, an hour and a half drive. I talked to Roy Uyeno, head coach of the Trojans, following the game and he mentioned the team had to be back at the high school by 6 a.m. Not just wake up at that time, they had to be dressed and at the high school.

After arriving back in Pahrump around midnight from the games on Monday, that means the players had less than six hours of sleep before turning around and playing Tuesday morning.

If that doesn’t show commitment, I’m not quite sure what does.

Anyway, back to the tournament.

The game against the Mustangs was the toughest of the tournament for the Trojans. Uyeno said it was most likely due to the lack of sleep and he had a feeling it was going to go the way it did.

McDaniel was tagged as the starting pitcher for the Trojans. He got beat up from the jump. McDaniel managed to last just two innings while allowing seven runs on five hits.

He had a brutal second inning that ended with a 2-run home run by the Mustangs outfielder, Thomas Moore Jr. This was one of two home runs for the senior in the game. His second homer of the day came via the grand slam style in the third inning.

McDaniel was close to getting out of the second after allowing one run, however, a mental mistake and a fielding error kept the inning alive.

The Trojans weren’t able to get much going with the bats.

For the second straight game in the tournament, the Trojans were only able to get four hits on the board. Metscher was the only player who got multiple hits, finishing the day going 2 for 2 with an RBI.

Pahrump Valley went on to be defeated by a score of 18-3 by the Mustangs.

The final game of the tournament for the Trojans was played Wednesday night. They were able to get a full night’s sleep and the weather went back to what it normally is. There was a slight breeze, roughly 70 degrees at the time of the first pitch and it was sunny. Much different than the previous two days of games for Pahrump.

Despite being their toughest opponent, the Trojans hung in with the Patriots of Liberty until the final inning.

Senior Zack Cuellar got the start at pitcher for the Trojans. It was the first time the whole tournament he saw the mound.

Cuellar pitched into the third inning, giving up seven runs on five hits. He was tagged for four runs in the third before being pulled.

After falling behind 7-1, the Trojan bats came alive in the top of the fourth inning.

Pahrump Valley scored four runs in their half of the fourth inning, attempting to spark a comeback attempt.

McDaniel got the scoring started with a 2-run single to the outfield. He would later come around to score on a Cuellar double.

The Trojans added another run on a sacrifice fly by Colby Tillery.

The Patriots put a stop to the Trojans’ comeback attempt when they scored five runs in the bottom of the fifth inning to put the game out of reach.

The game was called after the fifth inning, making Liberty the victors by a score of 12-5.

The Trojans season record now stands at 13-7 overall and 2-1 in league play. They will have some much-needed rest coming their way.

Their next game will take place on Tuesday, April 19, when they resume league play in a home matchup with the Canyon Springs Pioneers.

This will be the first meeting between these two teams since a 13-8 Pioneers win during the 2015-16 season. First pitch is scheduled for 3:30 p.m.