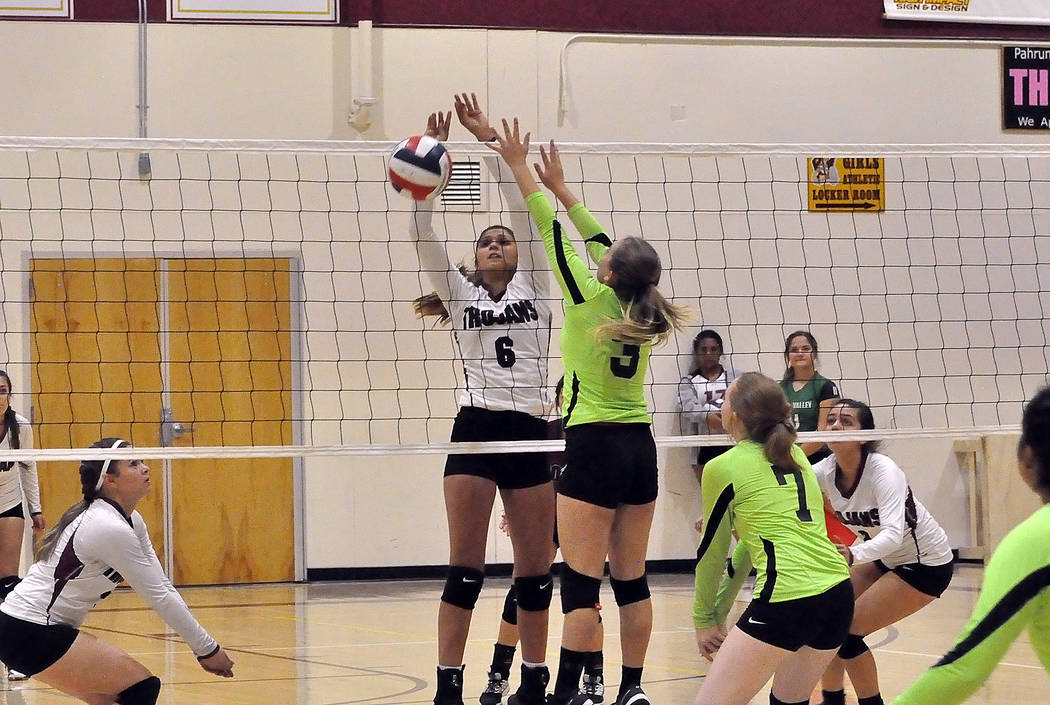 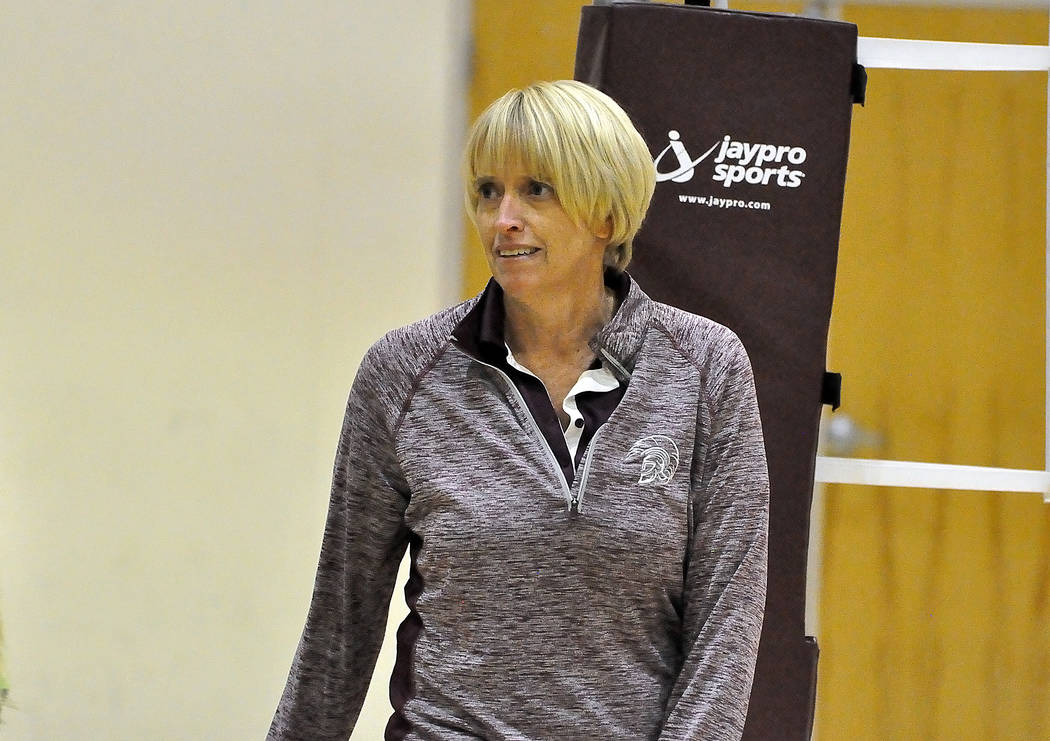 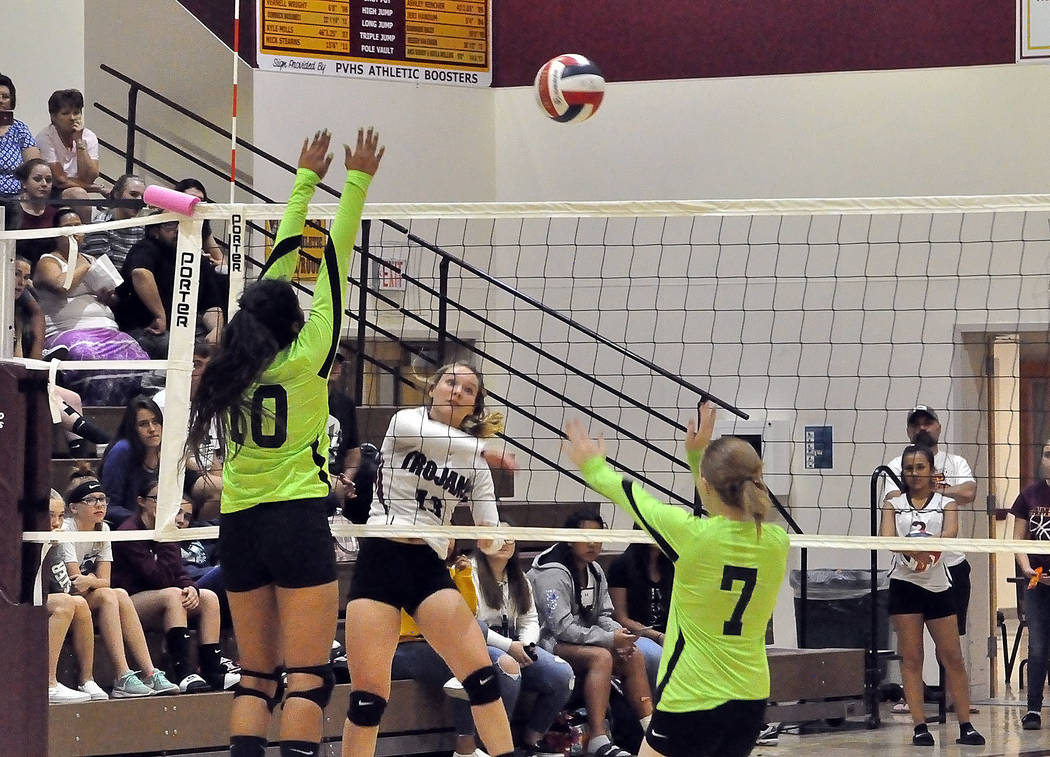 Horace Langford Jr./Pahrump Valley Times Pahrump Valley senior Jackie Stobbe sends the ball over the net against Virgin Valley on Wednesday in Pahrump. Stobbe recorded nine assists in a 25-13, 25-16, 25-17 sweep of the Bulldogs.

The home match against the Bulldogs was the Trojans’ first “regular” one of the season after seven best-of-three matches over two days in a tournament in Yerington. The outcome was no surprise

“They knew they were going to win this one, they really did,” Harris said. “They were confident.”

The Trojans finished 15-16 overall last year but 10-0 for the second consecutive year in the Class 3A Sunset League. Like several other Pahrump Valley teams — golf and softball spring to mind immediately — there is precious little competition in league for the volleyball team. Harris said that in the region, the Sunrise is simply better than the Sunset.

“The other side has Boulder City, and they were state champs last year with four freshmen,” she said. “Moapa lost a bunch of seniors, but those guys play really well over there. They have stronger teams on their side than on our side. I would rather play as many on that side as we can because they’re stronger on that side.”

A year ago, the Trojans defeated Tech in five sets in their first playoff match, then were swept by Boulder City in the Class 3A Southern Region semifinals.

“I want to do better than we did last year,” Harris said.

In a way, they already have. While Virgin Valley might not be that strong this season, last season the Bulldogs defeated the Trojans 3-1. This time around, sophomore Kate Daffer led the way with nine kills, and Elaina Dattillio added six. Jackie Stobbe paced Pahrump Valley in assists with nine, while Madison Hansen chipped in four.

The three sets were largely similar. In each, the teams were locked in a tight struggle before Pahrump Valley went on a run. The opener was tied 7-7 before a serve into the net by Virgin Valley gave the Trojans the lead for good. The only moment of drama the rest of the way came when a Virgin Valley player sent the ball into the ceiling, bringing a chunk down onto the court.

Harris drew one of the biggest cheers of the night when she brought out a broom to sweep up the mess. From that point on, the Trojans won 11 of 14 points.

In the second set, the Trojans never trailed, but it took a while for them to shake off the Bulldogs. The teams were tied at 2-2, 3-3, 4-4, and 6-6 before Pahrump Valley put a couple of points together, but it was still only 13-11 before the home team took charge.

The Trojans never trailed in the third, either, but the final set was still tight later than in the first two. Pahrump Valley took an 8-2 lead, but Virgin Valley rallied as the Trojans suddenly had trouble keeping the ball in the court. It was 14-14 before the Trojans put a little momentum together, and scoring seven of eight points after a kill attempt went wide to pull the Bulldogs within two settled the issue.

The effort had Harris smiling throughout the match.

“This isn’t the place to get mad at the kids,” she said. “You get mad at them in practice. During the game, that’s when you have to encourage them. You can focus on mistakes and what you did wrong in practice. If I’m going to lose my composure, the kids will, too.”

That certainly wasn’t going to happen on this night, and the Trojans have an experienced team to try and keep Harris smiling. Six seniors and two juniors dot the roster, and that doesn’t include sophomore Kate Daffer, whom Harris singled out for her effort against Virgin Valley.

It adds up to a team that has an excellent chance to do as Harris hopes: Be better than last year.

“Are they where we want them to be at the start of the season? Yes, I think we’re OK.” she said. “We still have a lot of things to work on, but they’re working hard in practice.”

The Trojans have a home match against Cheyenne at 6 p.m. tonight and then have almost a week off before opening league play at 6 p.m. Thursday at Democracy Prep.