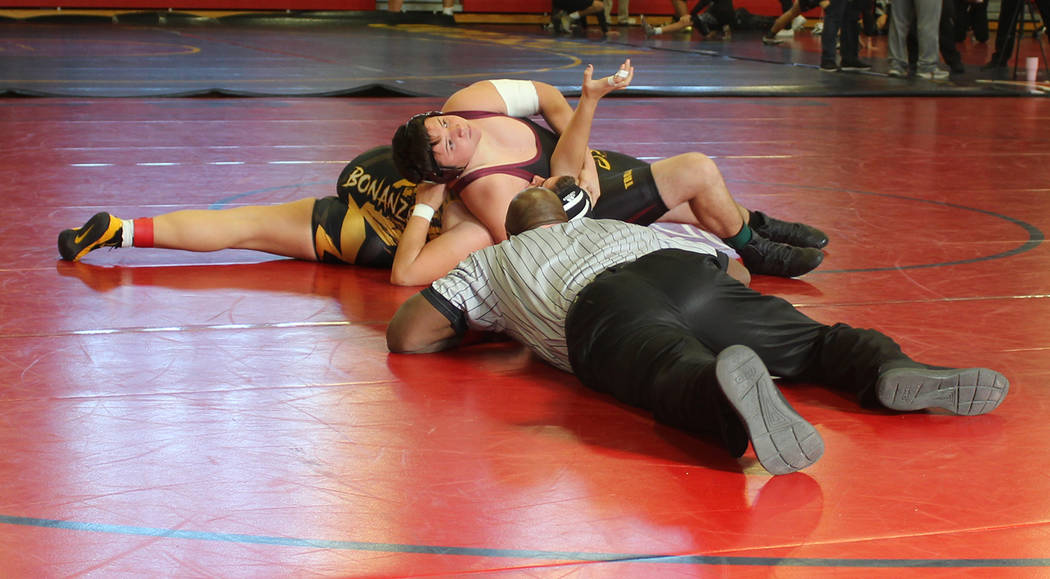 Tom Rysinski/Pahrump Valley Times Pahrump Valley sophomore Anthony Pearson closes in on an 18-second pin of Kamila Montenegro of Bonanza on Saturday at the Liberty Duals in Henderson. 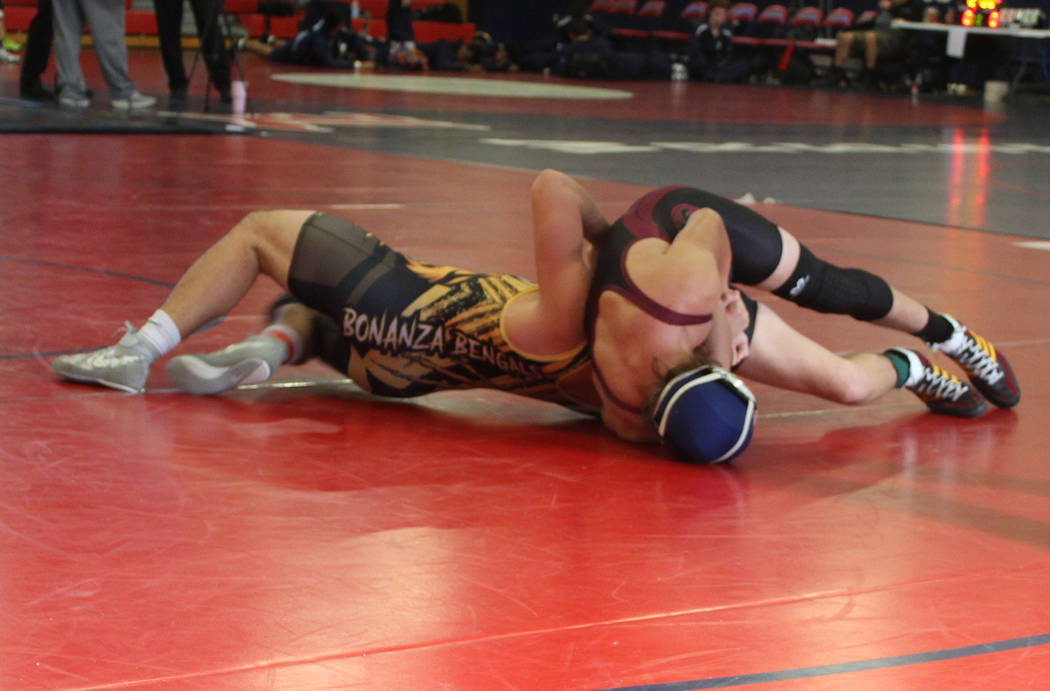 There was reason for optimism in the Pahrump Valley High School wrestling room this season, as plenty of experience returned from a team that finished third in the Class 3A Southern Region and sixth in the Class 3A state tournament.

But the Trojans have been rolling early by combining that experience with talented freshmen, and not just at the very lightest weights, currently ably manned by Mason Prunchak (106) and Garrett Cosper (113). Coach Craig Rieger loves talking about his freshman one-two punch of Coby Tillery and Henry Amaya, and that duo went 7-3 on Saturday as the Trojans took third place at the Liberty Duals.

Coincidentally, both young wrestlers came into the season after being away from the mats.

“I took three years off and came back this year,” said Tillery, who posted first-period pins in a 54-22 win over Bonanza and a 54-24 victory against Durango during a 3-2 day at 126 pounds. “I took off because I needed a break since I had been doing this my whole life. And I came back because I missed doing it.”

Amaya had a different reason for taking time away from wrestling.

“I took last year off because I had a knee injury,” said the 132-pounder. “I was playing football and ended up taking a helmet to the knee.”

Three times Amaya was done before the end of the first period during his 4-1 day, including falls of 40 seconds, 49 seconds and 1 minute, 20 seconds.

“I think I did pretty good,” Amaya said. “My double-legs were on point and everything. I just took them down and worked what I could.”

Amaya said the double-leg takedown is his strongest move.

“I just like working the double-leg,” he said. “It helps me get them down easier, and sometimes it even helps getting them on their backs.”

For his part, Tillery was not quite as satisfied with his efforts. He split four bouts and received a forfeit during a 63-6 laugher against Canyon Springs.

“I feel like I should have pressed myself harder,” he said. “I need to work on protecting my legs.”

Rieger said his team had a good day, defeating four Class 4A schools, three decisively. The fourth win was 43-42 over Liberty, a match which had to go to tie-breaking criteria before the Trojans were declared the winner. The loss came to a newcomer; SLAM Academy wrestled as an independent last season before moving into the Class 3A Sunrise League this year, meaning the Trojans will see the Bulls again in the regional championships in February.

“That SLAM Academy team has some really good individuals,” Rieger said. “They just wrestle. That’s all they do in that program.

“And it’s fun to scrap with the big schools and do well.”

Dylan Wright was his usual dominant self, cruising to five pins, all during the first period. Wright wrestled at 170 against Bonanza, Liberty and Canyon Springs and 182 against Durango and SLAM Academy, alternating with Ty Hansen, who received four forfeits and posted a pin against Liberty in his other bout.

At 195, sophomore Anthony Pearson put on a show, needing just 18 seconds and 10 seconds to win two of his bouts and finishing off SLAM Academy’s Braeden Williams in 1:23, the only wrestler other than Wright to win by fall against the Bulls.

Pahrump Valley has dropped just one match in each of their three dual-meet events and has swept five other matches despite still not having a complete lineup. The Trojans forfeited three weight classes at Liberty.

“Donnie Miller at 120 has been a little sick, so we forfeited there,” Rieger said. “At 152, we were open today. We don’t know if Tristan Maughan might go down in weight (from 160). And Jakob Landis went to Hawaii with the band and is catching up on grades, and he’s a good heavyweight. If we ever get to full strength, which we were close to at Valley on Tuesday.”

Both Tillery and Amaya say their goal is to make the state tournament, which will be held Feb. 8-9 in Winnemucca. It’s not an unreasonable goal in a program such as Pahrump Valley, which sent 12 wrestlers to last year’s states. And with nothing on the schedule until Jan. 10 when Mojave comes to Pahrump for a league match, the race to the states will be a short one.

“It’s been good, and we’ve got a little break now,” Rieger said. “Christmas Eve, Christmas Day, New Year’s Eve, New Year’s Day, we’ll give them some days off to regroup. And otherwise we’ll be at practice, getting better, getting ready for January, because it will go fast.”