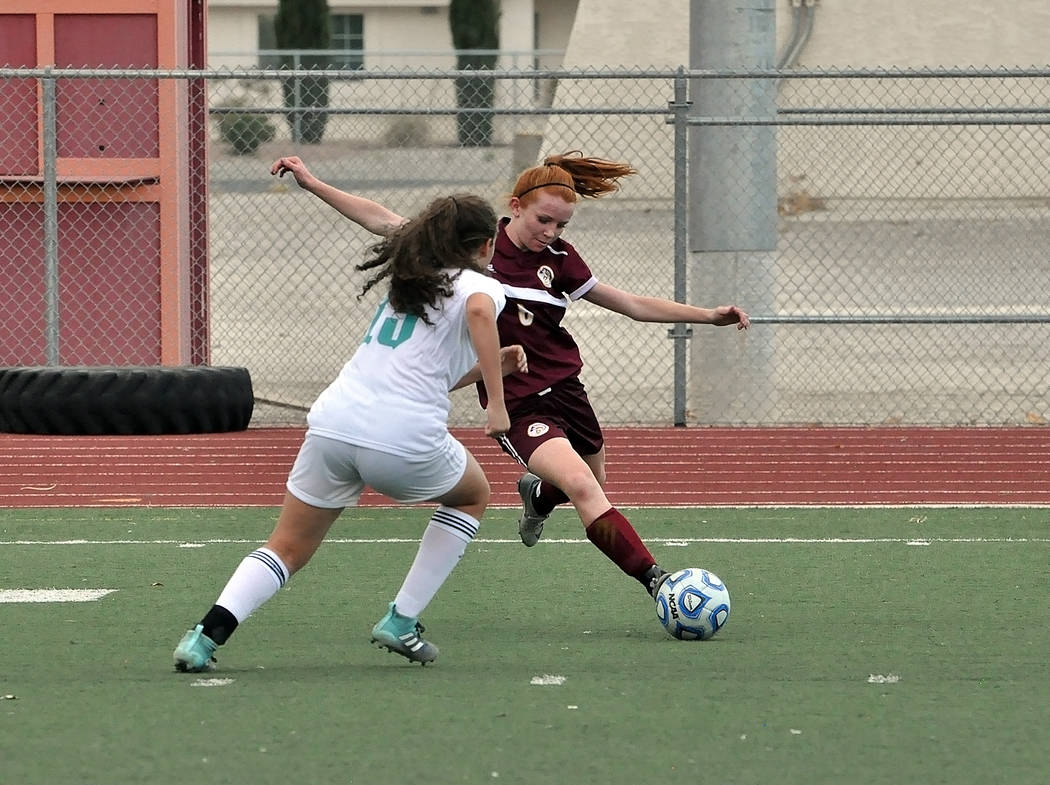 Horace Langford Jr./Pahrump Valley Times Makayla Gent maneuvers against a Sky Pointe defender during a Sept. 4 game in Pahrump. Gent was named to the Class 3A All-Southern Region team after posting 12 goals and 12 assists for the region champion Trojans. 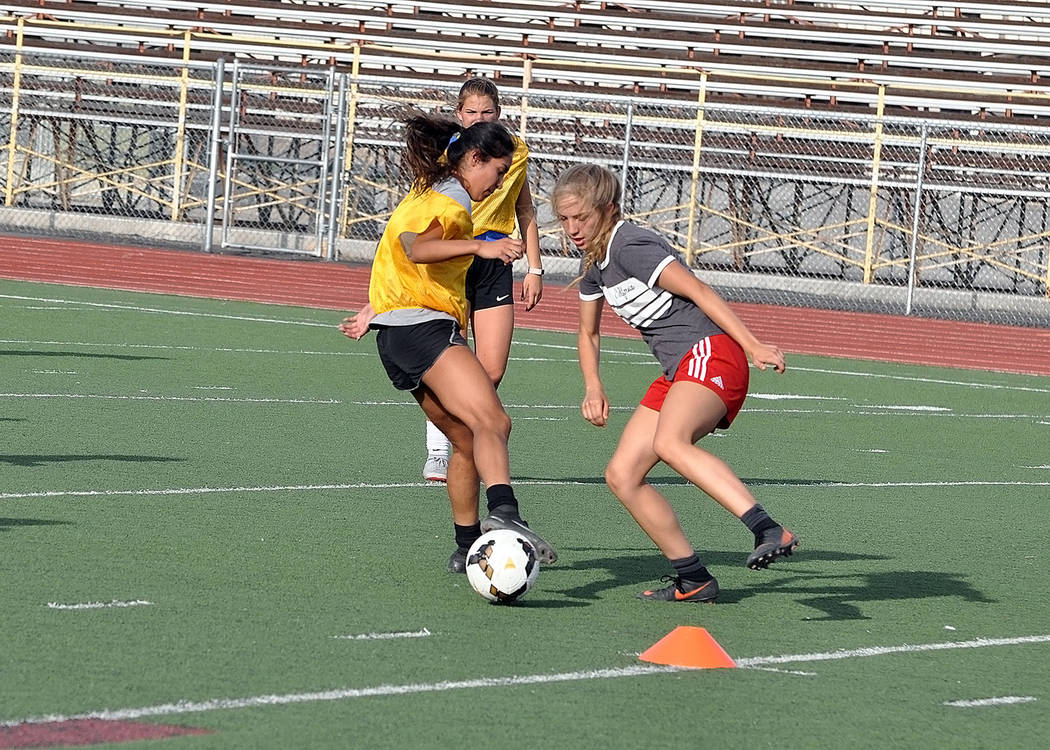 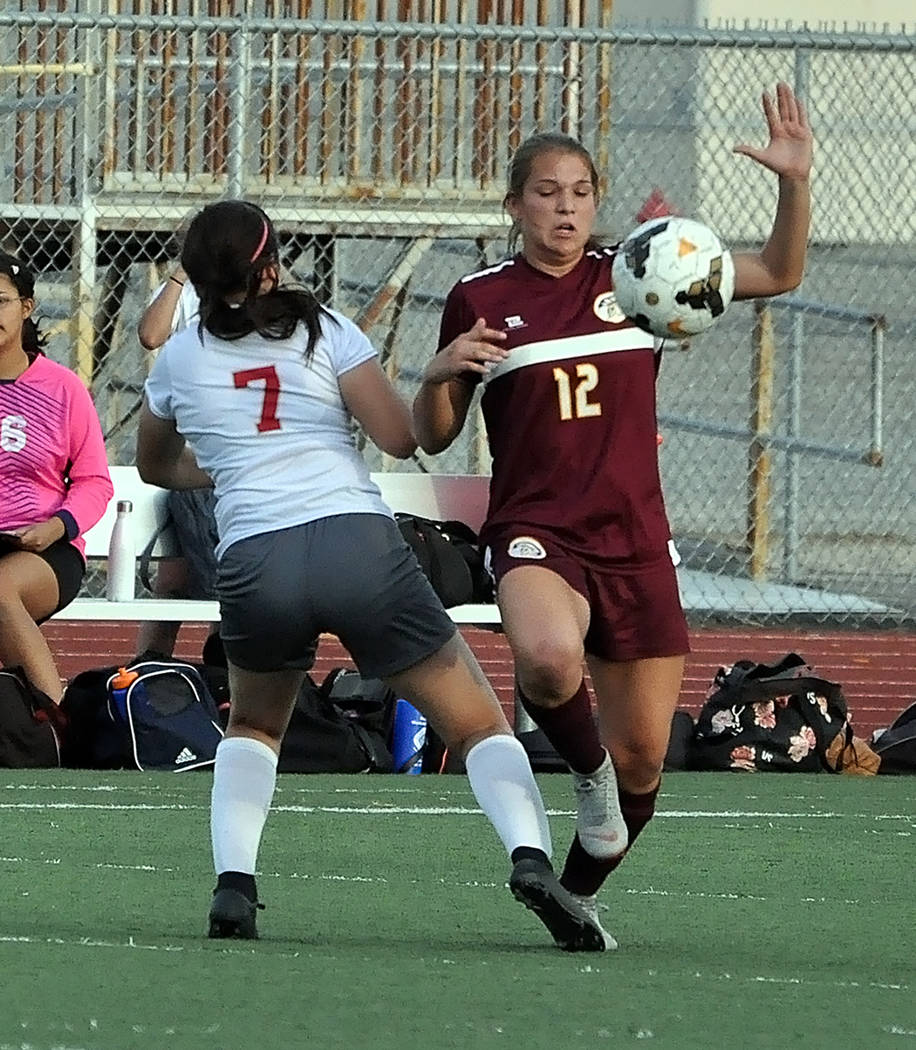 Sophomores Anai Garcia and Makayla Gent and senior Kimberly Ramos were named to the all-region team, with sophomores Juliana Hemphill and Madelyn Souza joining them on the all-Sunset League team.

All season, Pahrump Valley girls soccer coach Julie Carrington has had high praise for her defense. Other coaches agreed, and Garcia was named the Sunset League’s defensive player of the year.

“She is a strong, hard-tackling, hard-working central defender with great speed,” Carrington said of Garcia. “She has developed an outstanding ability to read the game and always be in the right place to make a tackle. Plus she is comfortable in possession, and her distribution skills allow the team to build attacks from the back line.”

Ramos and Gent were the team’s leading scorers. Gent was a key contributor as a freshman a year ago, netting 10 goals for a team loaded with seniors, so her team-leading 12 assists with 12 goals were not a major surprise. But Ramos went from a bit player a year ago with no goals and one assist to a team-leading 15 goals along with six assists as a senior.

“Kimberly helped bring us to the state semifinals by leaving her striker position and covering for Juliana Hemphill during the regional championship games,” Carrington said. “During the season, her work ethic in games and at practices was exemplary in the offensive position as striker and in a defensive position using her attacking skills to take possession of the ball and pass up the field.”

“She is a versatile defender who can play anywhere on the back line,” the coach said. “Although mainly used as a fullback this year, she can play the central defensive positions when needed. Another strong defender with great speed, who is comfortable in possession of the ball, Juliana is known for putting her body on the line to help the team.”

One play against Western stuck out in Carrington’s mind.

“With the Trojans up 3-2 and only a few minutes of the game remaining, a Western forward looked sure to score until Juliana threw herself into the tackle to block the shot, colliding with the offensive player, the turf and the goalpost while doing so,” she said.

The resulting injury led to her missing time, including the Class 3A state semifinal.

Carrington was so pleased with her defense that she wanted another defender, Allyson Rily, named all-league. “I would have chosen my whole defensive line, because they got us to where we were,” she said. “You never get everybody you want to. It tends to go sometimes more toward seniors.”

Carrington has a hard time mentioning one of her three sophomore defenders without talking about the others, and together they will provide a formidable backbone for the Trojans for two more seasons. She said it all started last season when the three were freshmen.

“The same three girls played defense in 2017 as freshmen alongside experienced Italian defender and foreign exchange student Beatrice Favella,” Carrington explained. “Playing with the talented Italian definitely helped the girls develop their positional play, and they gained valuable experience that helped them this year.

“After graduating six senior starters in May, this year was expected to be somewhat of a rebuilding year, but nobody told them that!”

Carrington is not exaggerating. Seniors accounted for 54 goals, 28 assists and 13.5 shutouts last season, a group that included last season’s Class 3A Southern Region player of the year Kaitlyn Carrington and goalkeeper of the year Alyvia Briscoe, along with three players — Sydney Dennis, Kathy Niles and Vaniah Vitto — who are playing college soccer. But, anchored by Garcia, Hemphill and Rily on defense, the Trojans repeated their 16-win season and trip to the state semifinals.

“All three ladies are dedicated and hard-working,” Carrington said. “They are all very coachable and have the potential to go on to play at the college level — hopefully after helping the Trojans to a state championship or two before they do so.”