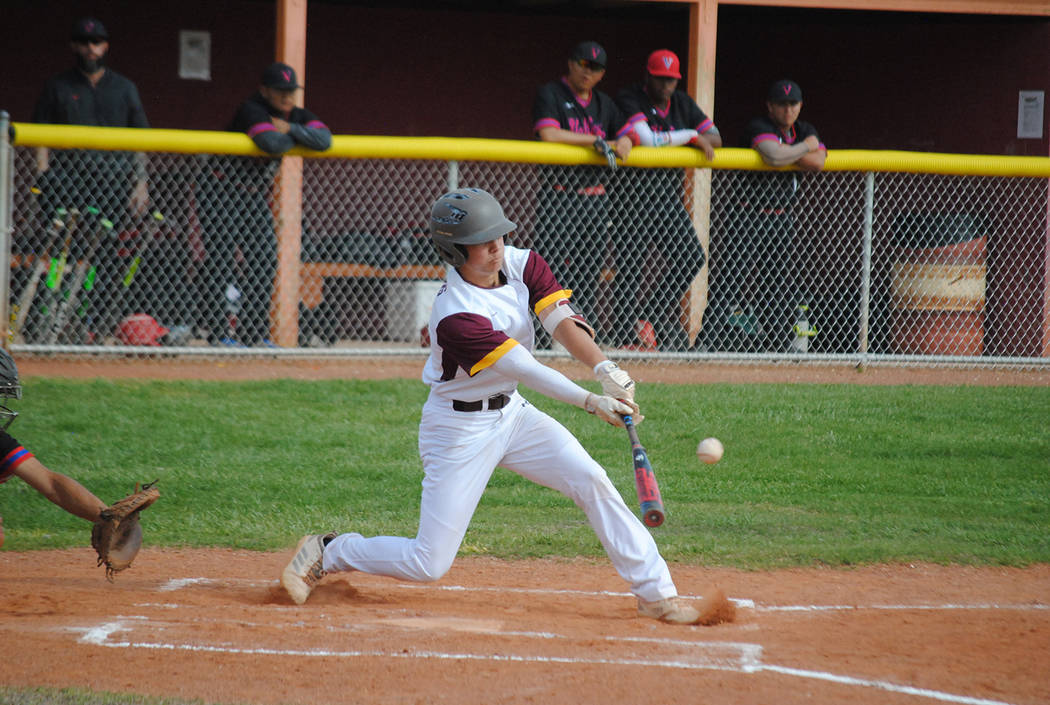 Charlotte Uyeno/Pahrump Valley Times Pahrump Valley senior second baseman Joey Koenig was chosed as the Sunset League's Player of the Year and was selected Class 3A first-team all-state by coaches.

Sunset League Player of the Year Joey Koenig headlines a group of four Pahrump Valley High School baseball players who were voted to the All-Southern Region first team by coaches, with three more joining them on the All-Sunset League first team.

Koenig, a senior second baseman who was named first-team all-state in Class 3A, hit .423 with 6 doubles, 4 triples, 11 RBIs and 46 runs, which tied for the team lead. He posted a .526 on-base percentage and leading the Trojans with 17 stolen bases while playing all 36 games.

“I was expecting a big year from Joey offensively, but he really showed tremendous improvement both defensively and on the mound,” Pahrump Valley baseball coach Brian Hayes said. “Defensively, he has been solid for us, but he took a huge step for us in the field and led our infielders in almost every category.”

“Going into the season we were hoping he could eat up innings for us in relief but weren’t expecting him to be our closer,” Hayes said. “He turned into our best reliever and the guy that we brought in to close it out in big games. Honestly, I am still kicking myself for not going to him in the Moapa game (in the region tournament), but the circumstances to bring him in would not allow me to do so.

“Offensively, he did everything for us but drive in runs, which isn’t really necessary when you’re batting in the leadoff spot. He was one of our team leaders in quality at-bats, runs and on-base percentage. The kid had a hell of a year.”

Lucas, who will continue his baseball career at Big Bend Community College in Washington, hit .370 with 2 home runs, 13 doubles, 2 triples, a team-high 37 RBIs and 33 runs. He also stole 13 bases and sported a .600 slugging percentage.

Those seven players were first-team All-Sunset League, while teammates Reace Millette and Dylan Grossell, both senior outfielders, were chosen for the second team. Senior first baseman Zach Trieb was an honorable mention All-Sunset pick after hitting .328 with 17 runs and 12 RBIs.

Pahrump Valley finished the season 26-10, winning the Sunset League title and winning three games in the Class 3A Southern Region Tournament before being eliminated 6-4 by Moapa Valley in the losers’ bracket final. The Trojans will lose eight seniors to graduation.