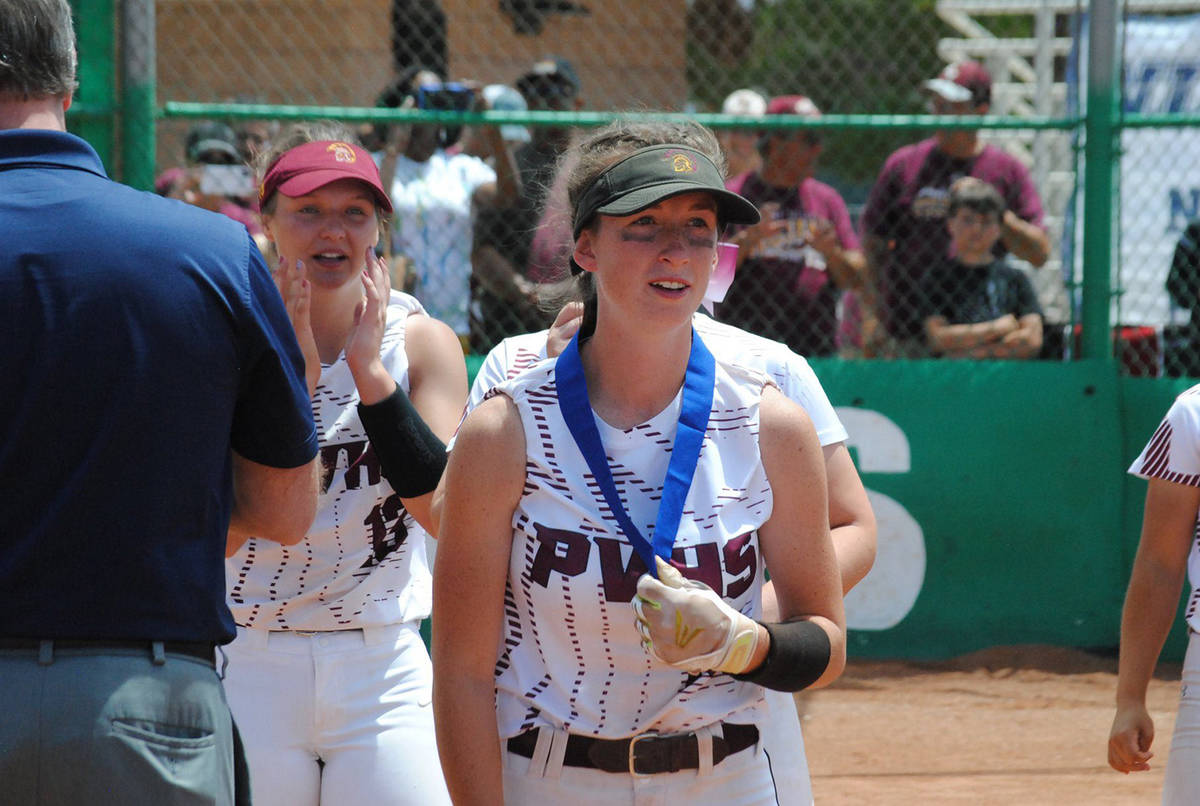 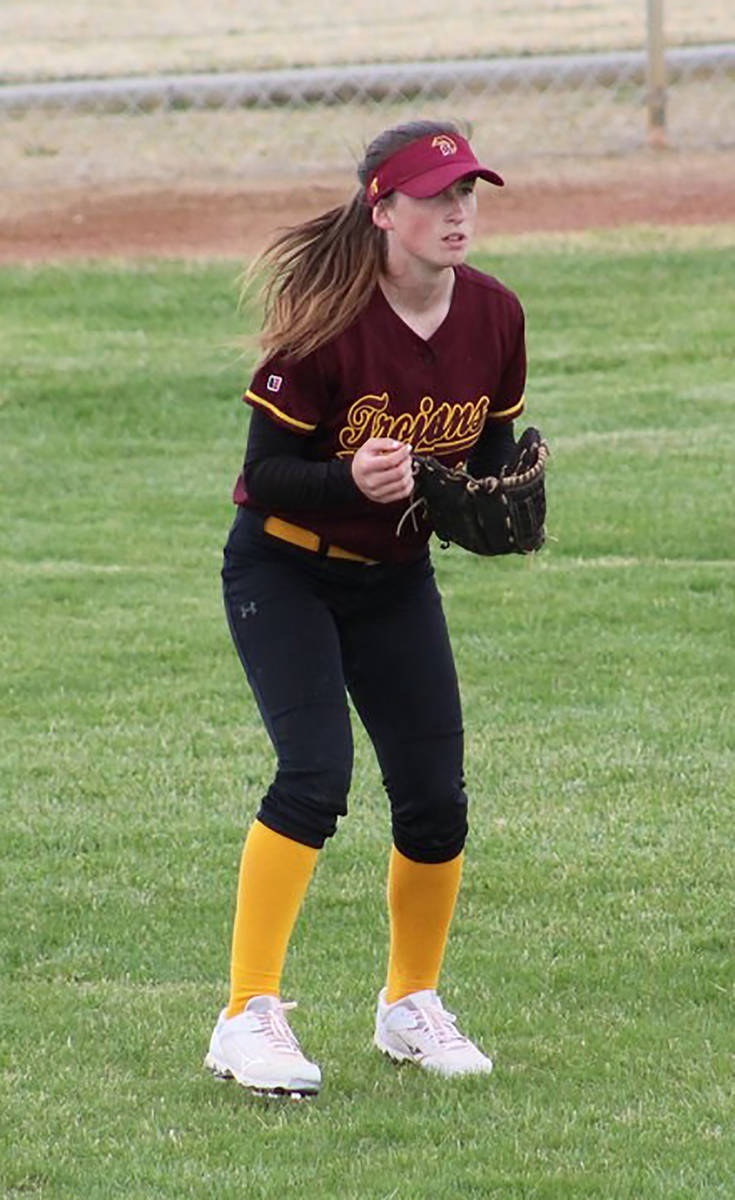 Cassondra Lauver/Special to the Pahrump Valley Times Kiley Lyons, who hit .306 for the Class 3A state champion PVHS softball team in 2019, will continue her softball career at Taft College in Taft, California. 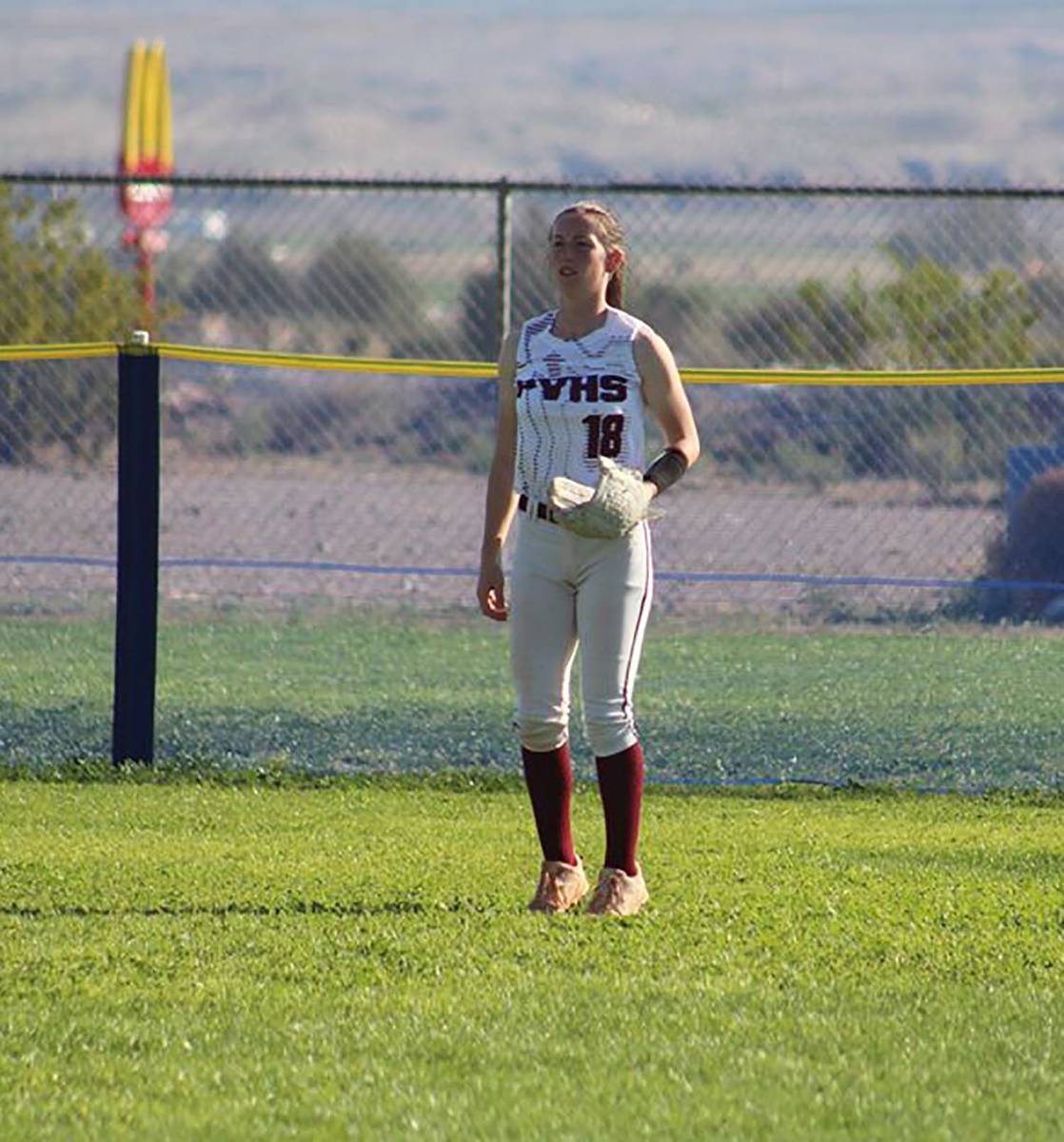 No, this is not a rerun: A Pahrump Valley High School softball player will be continuing her playing career in college.

Kiley Lyons became the fifth Trojan, the eighth recent PVHS graduate and the 10th graduating senior this year from Nye County to announce plans to play at the next level, making her choice of Taft College official Monday night.

“I was definitely super excited last night,” Lyons said Tuesday. “There was not one moment I was not smiling.”

Also smiling is Taft coach Gabrielle Brixey, who is happy to have Lyons in the fold.

“We are super excited to have Kiley become a member of our 2020-2021 roster,” Brixey said. “As a coaching staff, we see great potential for her in the outfield.”

Pahrump Valley coach Cassondra Lauver is equally delighted at the turn of events.

“She’s played softball for years,” Lauver said. “Playing in Pahrump for PYSA, Kiley went on to play for travel teams Pretty Vicious Softball and Impact Gold. She’s got a great arm and has been a major part of our success as a team. She made some big plays in clutch moments.”

And it was Lauver who brought Lyons and Brixey together.

“Actually I found it through Mrs. Lauver,” Lyons said. “Mrs. Lauver knows the coach there. It was actually kind of cool because I didn’t have to use the (Next College Student Athlete) website.

Lyons hit it off immediately with her new coach, and feels she can have the same relationship she has enjoyed with the Lauvers.

“I honestly talked to her at least two or three times a week,” Lyons said of Brixey, who has coached three seasons with the Cougars. “She’s a nice and sweet person, and I’ve connected with her so well. One big reason is she gave off a really great vibe, and she will give you a straightforward answer.”

The only way to discuss Taft’s truncated 2020 season would be with a straightforward answer. The Cougars struggled mightily this past spring, going 1-17 and ending the season with 16 consecutive losses before the pandemic ended the misery. Taft allowed 238 runs in those 18 games, but despite the statistical horrors, Lyons and Brixey remain undaunted.

“(Brixey) was saying they were having kind of a rough time, and they were expecting to get better toward the end of their season, but they obviously never got to finish that,” Lyons said.

“I believe her versatility in the outfield and eagerness to learn the game will give her the opportunity to compete for a starting spot right off the bat,” Brixey said. “She is definitely going to push the rest of the outfield to work harder. I can’t wait to see what next season holds for our program.”

Taft is a town of 9,000 located 32 miles west-southwest of Bakersfield in Kern County, and the college, a part of the California Community Colleges system, which counts 5,723 students, will celebrate its centennial in 2022. The school sponsors eight sports and offers more than 50 associates degree and certificate programs, but Lyons already knows she wants to stay involved with sports as a career.

“I want to be an athletic trainer for a school or a college so I can stick around sports,” she said. “Sports are a big part of my life, and Jessie Peterson was a huge, huge, huge inspiration in my life. She always talked about how much she loved it and what she had to do.”

A Pell Grant and scholarships will help cover the costs, and Lyons said she should be able to participate in a work-study program as well. And she likes what she knows about the town.

“It’s a nice little town; it’s super quiet,” Lyons said of Taft. “I was talking to one of the girls there who is from South Africa, and she has been staying in her apartment by herself and she feels super safe.”

That was one reason she chose Taft over other schools she had been considering.

“There were a few that I was talking to, maybe four, and it kind of came down to the fact that I’m not necessarily ready to go super far away from home, just far enough so I can get a different experience,” Lyons said. “And these other schools were costing a lot more money and I was not getting as good of an offer from them.”