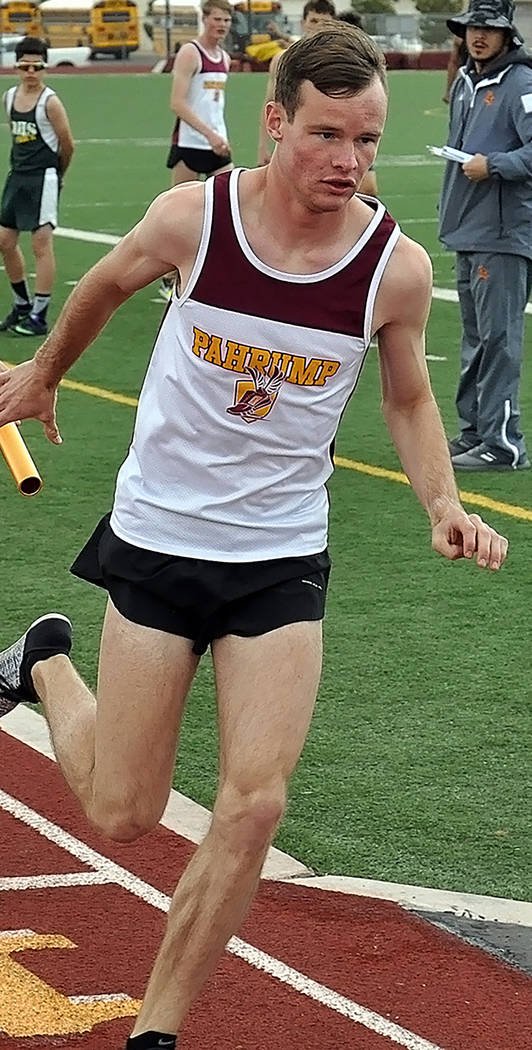 Pahrump Valley senior Bryce Odegard was named first team all-state in track and field by Nevada Preps, one of only three athletes from Class 3A schools to be honored.

Odegard was cited for his performance at the Class 3A state championships in Carson City, which included winning the 800 meters in 1 minute, 57.69 seconds and the 1,600 in 4:29.61. The latter was noteworthy because it was better than the winning time at the Class 4A championship meet.

Odegard also finished fourth in the 3,200 and was on the second-place 4 x 800 relay at the state meet, but he was dominant in the Southern Region meet a week earlier at Moapa Valley. Not only did he complete a triple by winning the 800, 1,600 and 3,200, a year after finishing second in all three events, he joined Layron Sonerholm, Michael Sonerholm and Grant Odegard to set a meet record in the 4 x 800, winning in 8:06.95.

The only other Class 3A athletes out of the 12 who were selected to the first team were Mojave’s triple jumper Quincy Smith and high jumper John Harper, who cleared 6 feet, 10 inches earlier in the season. Only one Class 3A athlete was named to the second team: Jordan Howden of Desert Pines, who won the long jump at state and was on the 4 x 200 team that set a championship meet record.

This is Odegard’s first all-state selection for his performance in track and field, but he is not new to Nevada Preps all-state teams. As a sophomore, he was named second team all-state in cross-country after finishing fourth in what was then the Division I-A state meet in 17:34, placing second in the Southern Region meet in 17:49 and winning six races during the season.

As a junior, Odegard was selected first team all-state after recording eight first-place finishes, including the Southern Region championship and the Class 3A state meet, which he won in 15:56. Odegard was named second team all-state by last fall in cross-country after winning the Southern Region championship and finishing third at the Class 3A state meet. He finished first in seven races during the season.

No other Pahrump Valley athletes were named either first or second team all-state by Nevada Preps in spring sports, but Jackie Stobbe for softball and Garrett Lucas for baseball were named honorable mention.