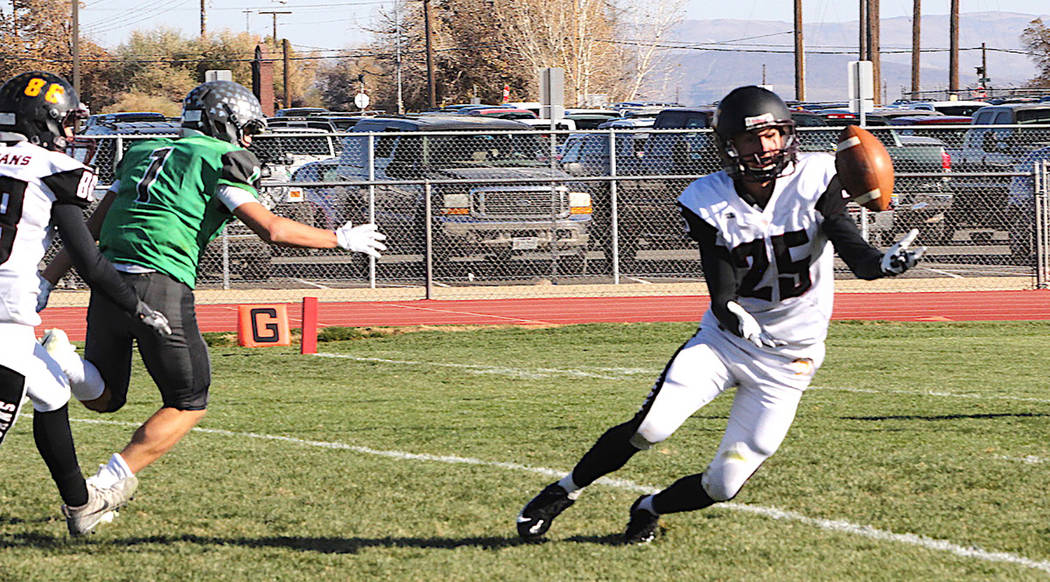 Thomas Ranson/Special to the Pahrump Valley Times Pahrump Valley senior Willie Lucas closes in on an interception he returned 95 yards for the Trojans' first touchdown Saturday during their 58-20 loss to Churchill County in the Class 3A state semifinals in Fallon. 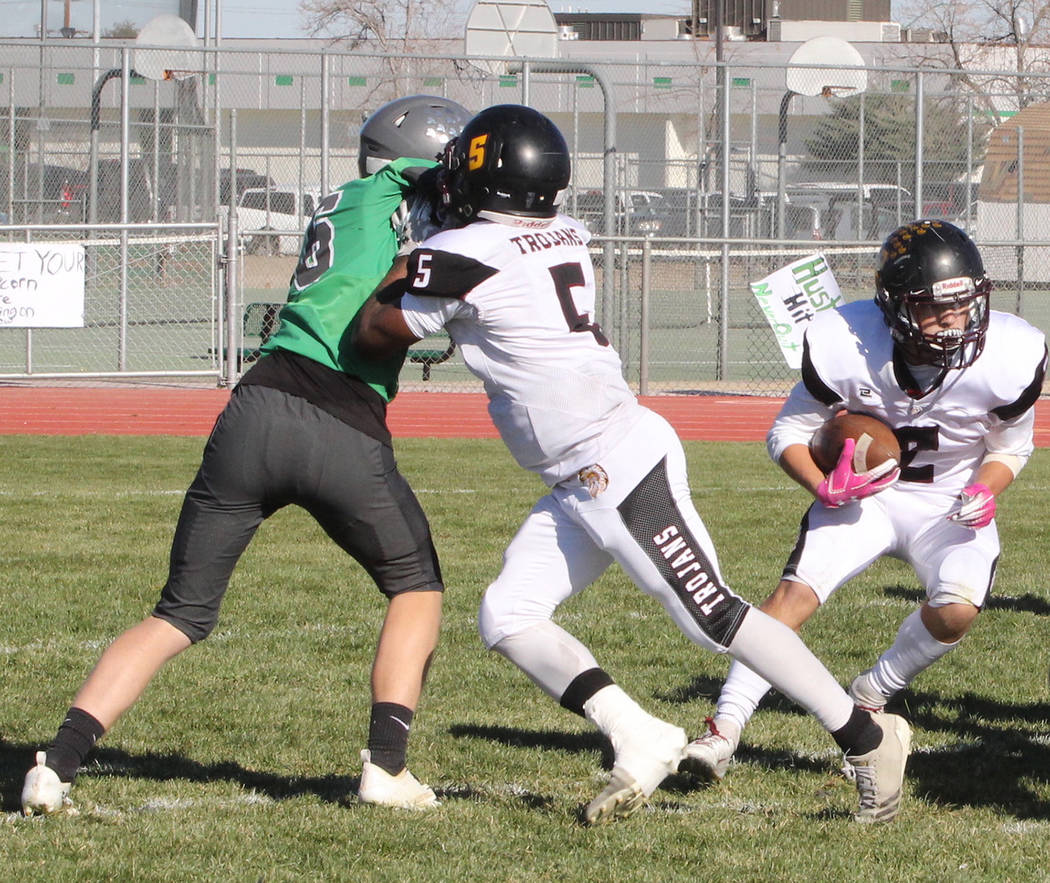 Thomas Ranson/Special to the Pahrump Valley Times Casey Flennory (5) clears space for Joey Koenig to run during Pahrump Valley's 58-20 loss in the Class 3A state semifinals Saturday in Fallon. Koenig led the Trojans with 118 yards rushing. 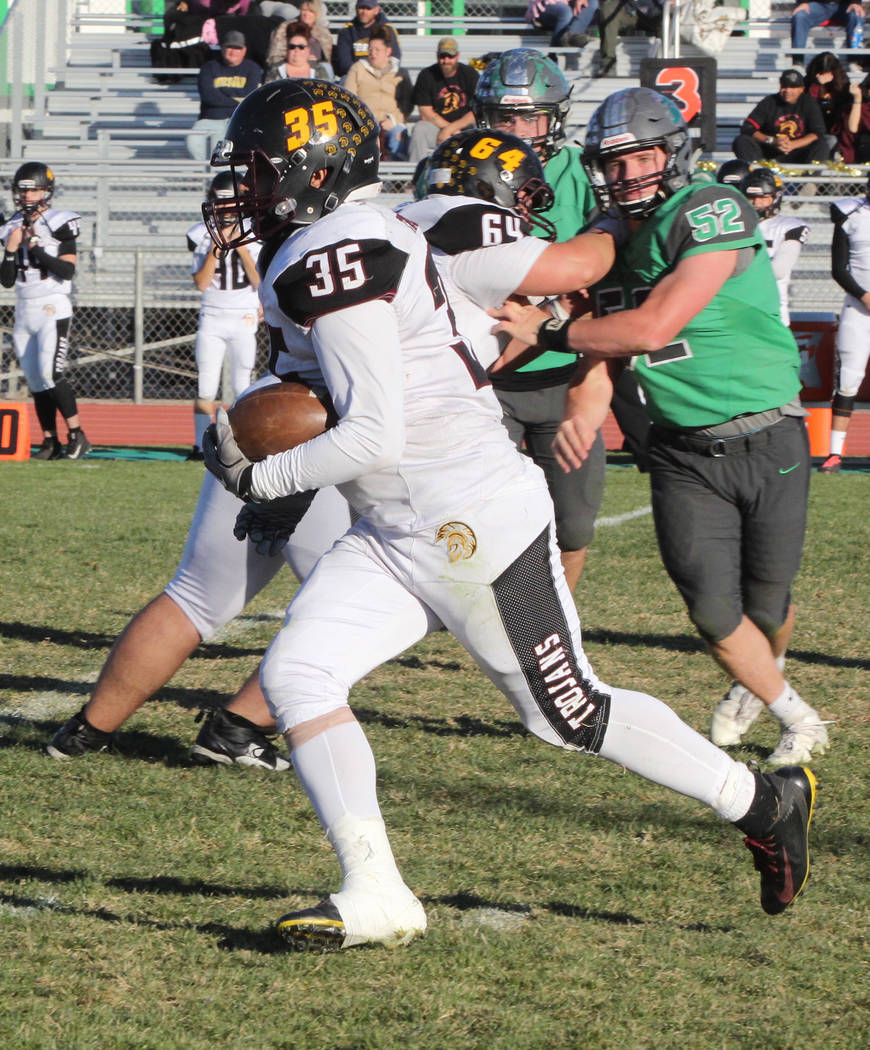 Thomas Ranson/Special to the Pahrump Valley Times Pahrump Valley senior Nico Velazquez finds running room against Churchill County for a 37-yard touchdown. Velazquez finished with 15 carries for 93 yards as the Trojans fell 58-20 to the Greenwave on Saturday in Fallon.

The magic carpet ride that took the Pahrump Valley High School football team through an undefeated Sunset League campaign, a playoff bye and the school’s first playoff victory in 40 years came to an abrupt end Saturday afternoon in Fallon.

Sean McCormick rushed for 334 yards on 25 carries as Churchill County (11-0) punched its ticket to the Class 3A state football championship game with a dominating 58-20 win over the Trojans at the Edward Arciniega Athletic Complex.

“We lost to a better team, for sure,” Pahrump Valley coach Joe Clayton said. “We didn’t hurt ourselves, they just simply beat us.”

The Greenwave kept the offense on the ground against the Trojans, rushing for 479 yards and scoring eight touchdowns. The Wave jumped on Pahrump Valley (7-4) for two first-quarter touchdowns, a 12-yard quarterback keeper from Elijah Jackson and another score from the junior, a 34-yard run. McCormick, who has verbally committed to play football at the University of Idaho, scored the second 2-point conversion after the Trojans’ defense stopped him after the first touchdown.

Defense put Pahrump Valley on the scoreboard with 2:45 left before halftime. Jackson heaved a long pass downfield, but Willie Lucas snared the ball for the Trojans and took the interception 95 yards for a score.

The Wave struck quickly twice thanks to McCormick during the last 2:22 before halftime. First, McCormick ran for a 15-yard touchdown, then with Trojan quarterback Dylan Wright under pressure from Churchill County’s Trey Rooks, he threw an interception McCormick returned 53 yards down the sideline to score with 39 seconds remaining in the second quarter. His 2-point conversion was good to give the Wave a 36-6 lead at intermission.

“What a stud,” Clayton said of McCormick. “I told my staff I thought we were playing Christian McCaffrey. It didn’t hurt that their O-line was huge, and the entire team was well-coached.”

“Sean did a phenomenal job,” Churchill County coach Brooke Hill said. “He’s one of the best players we have ever had. We depend on him to win the football game, and the other guys step up.”

The lead swelled to 44-6 when Jackson found Tommy McCormick for a 1-yard strike. Sean McCormick scored his third touchdown with 7:15 remaining in the third quarter on a 30-yard run.

The Trojans scored twice during the third quarter as well. Senior Joey Koenig, who led Pahrump Valley with 118 yards rushing on 12 carries, broke loose and outran the secondary for 74 yards, and the Trojans’ leading rusher, senior Nico Velazquez, found a hole in the Fallon defense and took off down the Pahrump sidelines for 37 yards.

Velazquez finished with 15 carries for 93 yards.

Sean McCormick’s 43-yard touchdown run and 2-point conversion pushed the lead to 38 and started the running clock in the fourth quarter.

Jackson threw as many interceptions (two) as completions, but he ran for 81 yards and two touchdowns. Wright completed one pass for nine yards, and the Trojans were held to 214 yards rushing. Most frustrating for the Trojans was that the bulk of the runs came on big plays, as the Greenwave prevented them from doing what they do best on offense.

“We were worried about the offensive side,” Hill said of the Trojans. “They had a couple of big plays and scored quickly, but that was OK. We didn’t let them grind out the ball.”

It will be an all-Northern League Class 3A final. Truckee’s 23-16 come-from-behind victory at Moapa Valley in the other semifinal game sets up a showdown between the Wolverines and Greenwave at 5 p.m. Saturday at Carson High School.

The defeat puts a sour note on an otherwise sweet season for Pahrump Valley, and Clayton was quick to maintain that perspective.

“Our young men bought into what we believe, and that is old-fashioned, cloud-of-dust, power running, downhill, pound-it-out, run-it-down-your-throat offense and tough, hard-nosed, disciplined defense,” he said. “Little did they know they would end up even better thanks to a first-round bye and a number-one seed. They ended up as the best team in Pahrump Valley High School history.

“Fourth-place finish in state, losing to the probable state champs. I enjoyed the hell out of these kids. It was a really fun ride.”