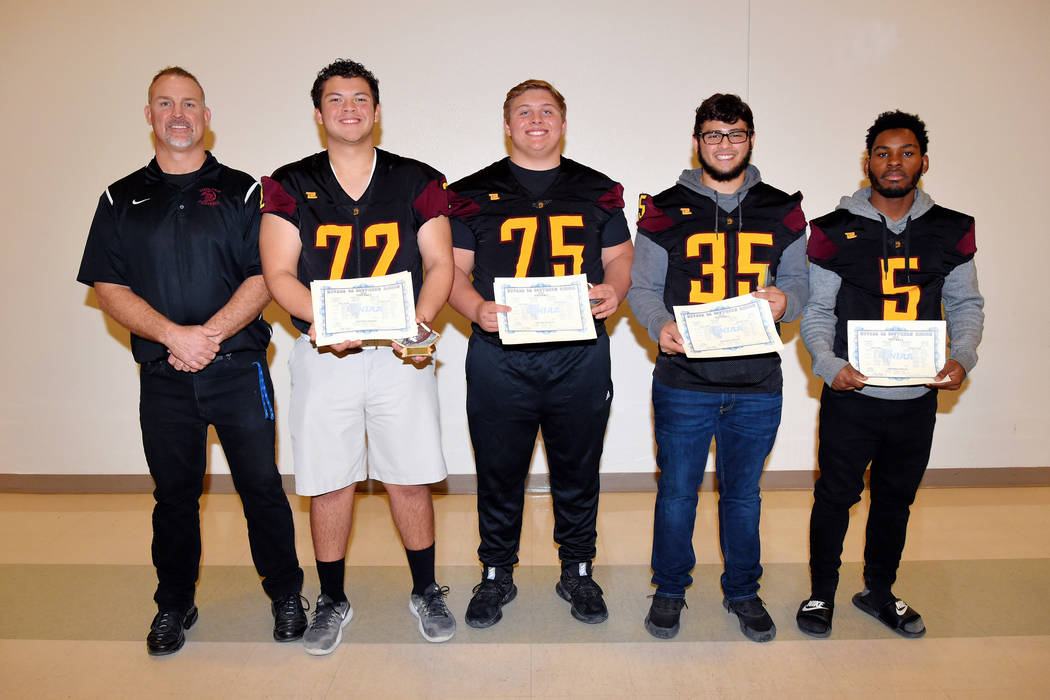 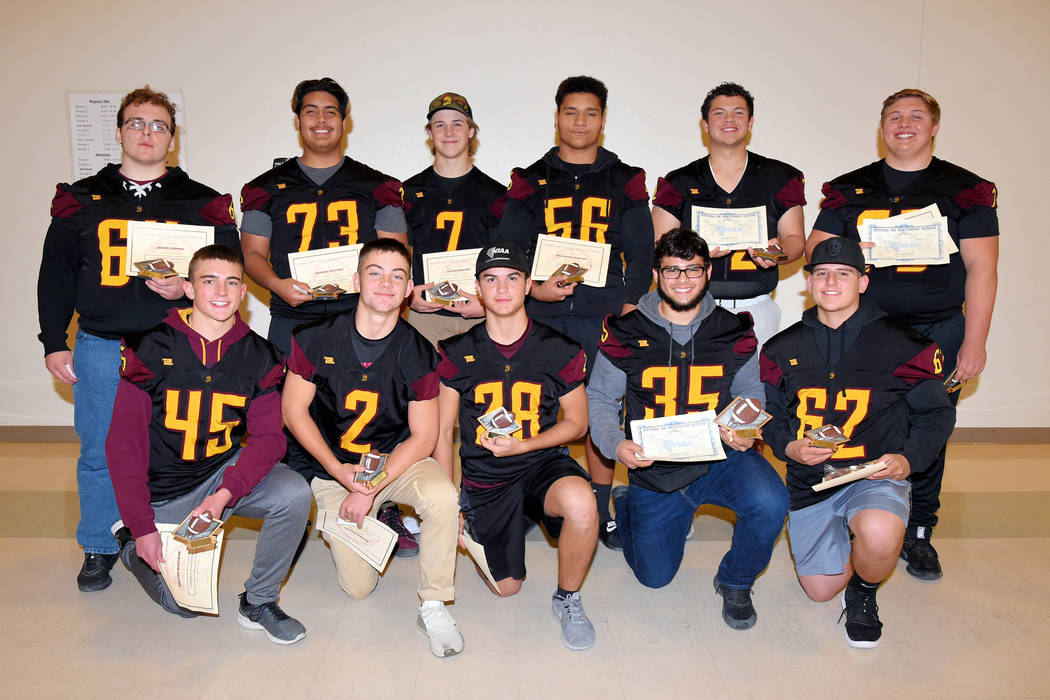 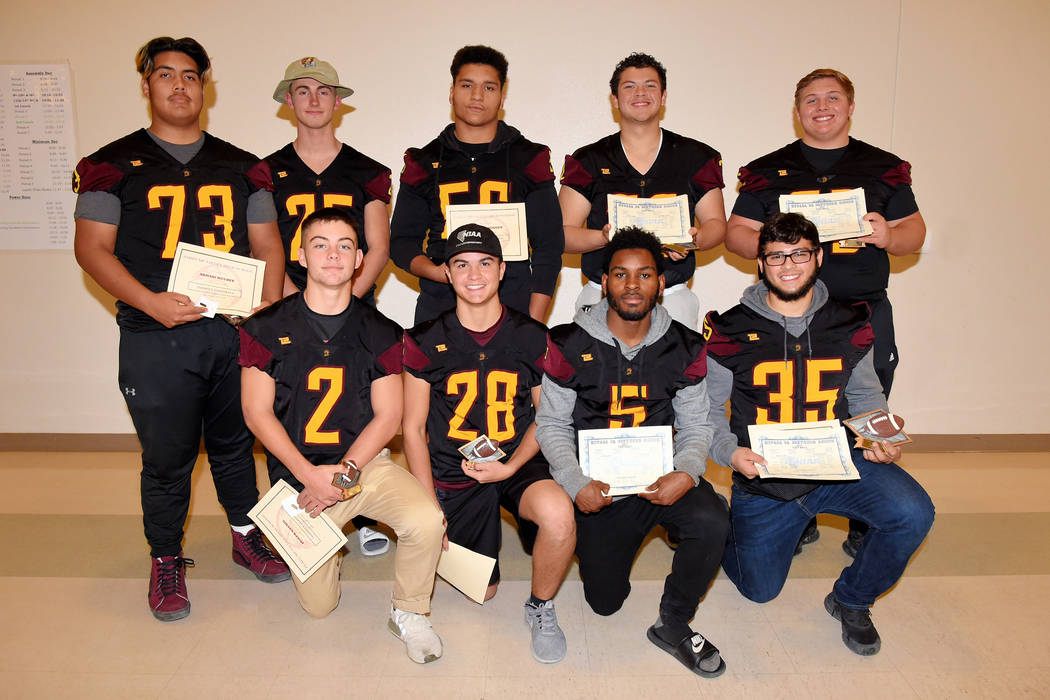 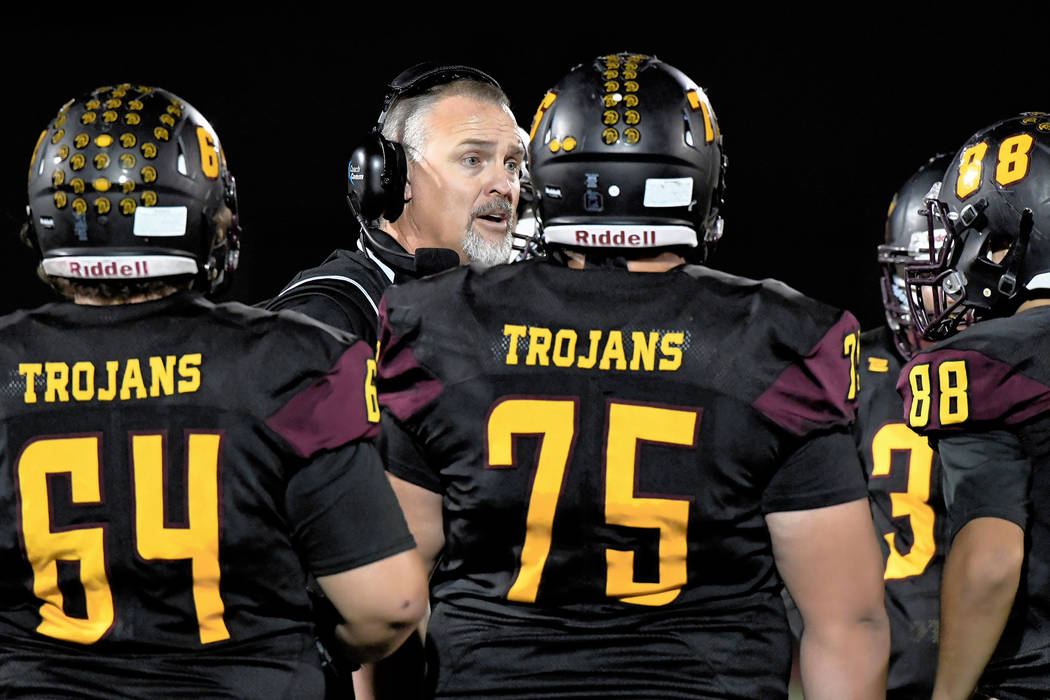 Peter Davis/Special to the Pahrump Valley Times Pahrump Valley High School football coach Joe Clayton was named the Class 3A Southern Region coach of the year after the Trojans went 7-4, went undefeated in the Sunset League and won a playoff game for the first time in 40 years.

Pahrump Valley High School football coach Joe Clayton is adamant about giving offensive linemen credit. So he was absolutely delighted when senior Zach Trieb was named the Class 3A Southern Region Lineman of the Year.

“For Zach Trieb to get lineman of the year — and it was unanimous, every coach recognized the talent that kid had — it just makes me feel good, and I know that coach (Fred) Schmidt was really choked up,” said Clayton, who was named region coach of the year. “Those are his guys, and it was a really good feeling to see that he got recognized.”

“I was expecting more like first team in league, maybe region, but I wasn’t expecting lineman of the year,” Trieb said. “I was ecstatic.”

Trieb’s recognition was one of the highlights of the football team’s awards dinner Nov. 29 at the high school. Trieb was joined on the all-region first team by running back Nico Velazquez and left guard Caleb Sproul, while running back Casey Flennory was named to the second team.

“You don’t see too many 300-pound kids with quick feet like he has,” Clayton said of Trieb. “Even on the defensive side of the ball, he would spin off of blocks and make tackles. As a 300-pounder, you don’t see that very often.”

Trieb’s size is obvious, but his strength is impressive. In fact, his performance in the weight room forced the creation of a new “club,” as he became the Trojans’ first member of the 1,800-pound club.

Sproul’s selection reflects the success the Trojans had on the ground, as they rushed for 286 yards per game and tallied 38 touchdowns.

“We were left-side dominant, and that’s where the recognition for Caleb comes from,” Clayton said. “We had the lineman of the year, and then your guard on that side is getting recognized.”

Velazquez’s selection was an obvious one, as the senior was the state’s 10th-leading rusher with 1,417 yards, trailing only Churchill County’s Sean McCormick and Boulder City’s Thorsten Balmer among Class 3A players, and he scored 17 touchdowns.

It’s a tribute to Flennory that he earned second-team honors with a runner as prolific as Velazquez in the same backfield. Flennory averaged 7 yards per carry, totaled 800 yards and scored six touchdowns.

“It was a phenomenal one-two punch with Casey having the speed,” Clayton said. “Nico was the bruiser, and then you change up the pace a little bit and hand off the ball to your speedster.”

Those four players were also named first-team All-Sunset League, with Trieb again taking lineman of the year honors and Velazquez sharing the player of the year award.

“I was hoping I’d get that,” Velazquez said. “It feels good.”

“If you appreciate the game, you appreciate how he plays,” Clayton said of Velazquez. “You don’t see too many 210-pound kids that have the feet he has and the vision he has. Every coach that I talked to said No. 35 is the guy. When we exchanged film, that was the guy they were concerned about.”

The coaching staff handed out team awards as well, with the entire offensive line sharing the offensive most valuable player award.

“I think it was a no-brainer,” Clayton said of giving the award to Trieb, Sproul, Jacob Lopez, Anthony Pearson, Jakob Landis, Armani McGhee and Brandon Bunker. “I’m always really big on trying to get those offensive linemen the recognition they need because the offense that we run relies so heavily on those guys getting the job done. They all deserved recognition, for sure.”

Defensively, the MVP award went to senior Dylan Grossell, the team’s leading tackler with 59, who played most of the season with an injury that turned out to be a fractured shoulder.

“One of the things about Dylan, you’re talking about a kid who is extremely undersized for the position he played,” Clayton said of the senior linebacker listed at 5-foot-8 and 165 pounds. “We ask so much from some of our kids, and to get that much out of a kid with the stature he had, it was heart and tenacity.

“He was banged up, and he sucked it up and made some big plays for us.”

Senior Joey Koenig was named the Trojans’ most improved player. Koenig was second in the Sunset League with 391 receiving yards on only nine catches. That 43.4-yard average included a long of 80 yards and five touchdowns. He also made 27 tackles on defense.

“He got a concussion early in the season and missed a couple of games, and he had to go through a lot just to get to that level,” Clayton said. “Some of the games we won we wouldn’t have won without his catches.”

Sophomore quarterback Dylan Wright’s performance practically demanded postseason recognition. Stepping into the lineup in the second half against Sunrise Mountain, Wright handled the offense smoothly and made key passes, often deep, to Koenig.

“As a freshman, he took third in the state as a wrestler, and that told me he was mentally tough and he was strong enough to handle the pressure of being the varsity quarterback,” Clayton said. “When he got in there, he showed amazing nerves and was so tough mentally. We don’t spend the time throwing the ball with him, because we’re a running offense, and he was still accurate to put the ball where it needed to be. We don’t beat Del Sol if he doesn’t put that ball right in Joey’s hands.

“He earned the respect of his teammates. For him to step in — and he stepped in halfway through a football game — and not knowing he was going to be the guy, he just took off with it. I wasn’t sure what we were going to get, but every time there was a play to be made, he made it.”

“It’s for a kid that stands out with heart, tenacity, a player who would do anything to help the team be successful, and Tristan fit that mold perfectly,” Clayton said. “I bet he finished the season at 150 pounds, and you have ends in high school who are 215, 220. Think about this: He’d be going against Zach Trieb.”

Trieb and Velazquez agreed that defeating Boulder City 32-30 in the playoffs was the biggest memory of a successful 2018 season.

“Just how far we went, and how we broke that 40-year record of not winning a playoff game,” said Trieb, alluding to the fact the Trojans’ only other postseason victory was 3-0 over Moapa Valley in 1978.

“We were aware we hadn’t won in a while,” Velazquez added. And it didn’t take long for him to see something special in this year’s team. “Probably after the second league game, we really felt like we were here to dominate everyone.”