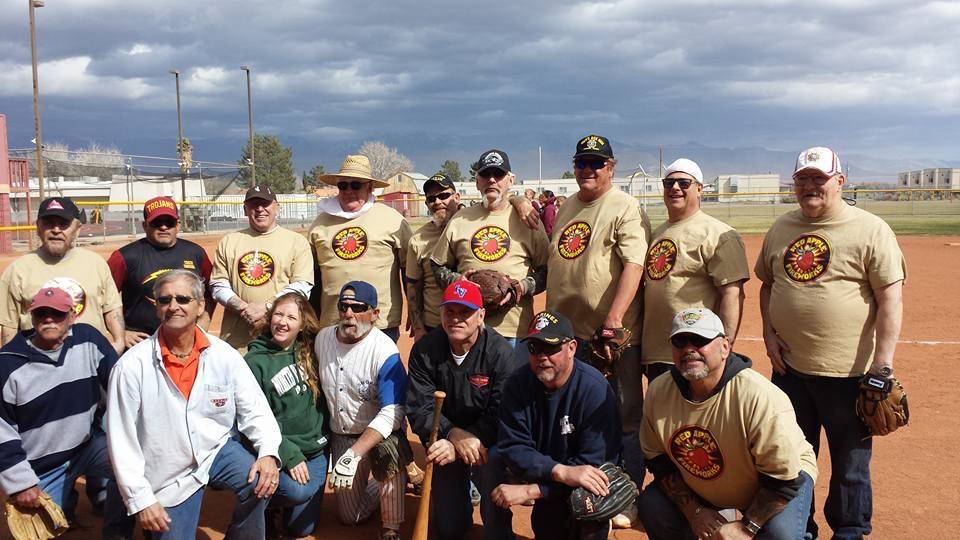 Linda Wright/Special to Pahrump Valley Times Members of the Veterans of Foreign Wars Auxiliary team after the Batting 1.000 softball challenge against the Girls Who Love Softball in March 2017. The fourth annual game will be noon Sunday, Feb. 25, at Pahrump Valley High School. 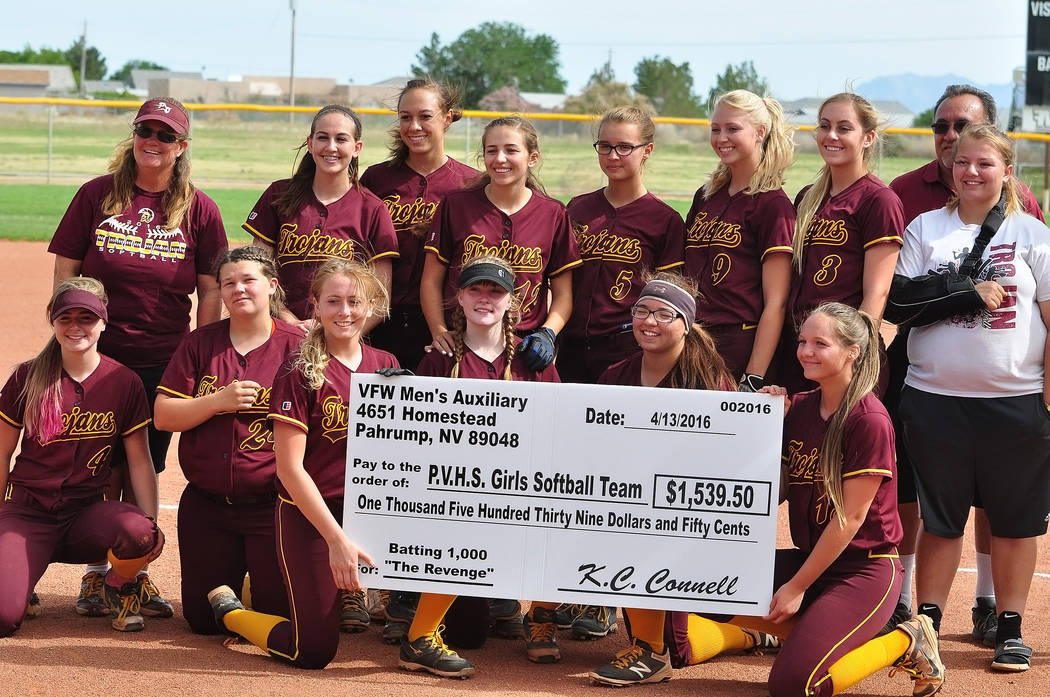 The Girls Who Love Softball have a score to settle.

For the past two years, members of the Veterans of Foreign Wars Auxiliary have defeated the softball players in an annual Batting 1.000 fundraiser game after the girls won the first one in 2015. The fourth edition will be played at noon Sunday at Pahrump Valley High School’s softball field. Admission is $2.

Of course, the final score is secondary to the goal of raising money for the VFW Auxiliary, which will donate a portion of the proceeds to the high school softball team. Players from the high school help organize the game and raise money, but the team itself is not the veterans’ opponent.

The game has become a proven crowd-pleaser, according to Linda Wright of the VFW Auxiliary.

“Attendance is really good, and most of it’s done by word of mouth and putting some fliers out,” said Wright, a 15-year VFW Auxiliary member.

This event began as a fundraiser for the then-Men’s Auxiliary, as some of the members had daughters, granddaughters or nieces who played softball. The idea evolved from a fun challenge to a fundraiser, and the first event was so successful the Men’s Auxiliary made a donation to the high school’s softball program.

Two years ago, the national VFW combined the Men’s Auxiliary with the Women’s Auxiliary, but only male members participate in the softball game.

Auxiliary members as old as their 70s have taken the field in previous years.

“They come out with their walkers and their wheelchairs,” Wright said. “It’s hilarious.”

For fans who have difficulty walking, a free golf cart will be available to bring people from the school’s parking lot to the field’s bleachers.

“There will be skits during the game and some raffles, and they’ll be selling peanuts and sunflower seeds just like a regular baseball game,” Wright said. “It’s a lot of fun.”

Just as there will be more than a game at the softball game, there is more to fundraising than the cost of admission. Softball players will be selling raffle tickets and collecting donations for the VFW Auxiliary during a “fill the glove” campaign from 10 a.m. to 2 p.m. Saturday at Maverik, Walmart and the Pahrump Farmer’s Market. The raffle offers prizes of dinners for two at one of five restaurants.

The money raised goes to the VFW Auxiliary, with its mission of service to the community.

“We do dinners down at the VFW post on Friday nights,” said Wright, whose father, husband and son served in the military. “We do projects and programs with the youth in the community. We do things for the hosptial. We do just about anything.”