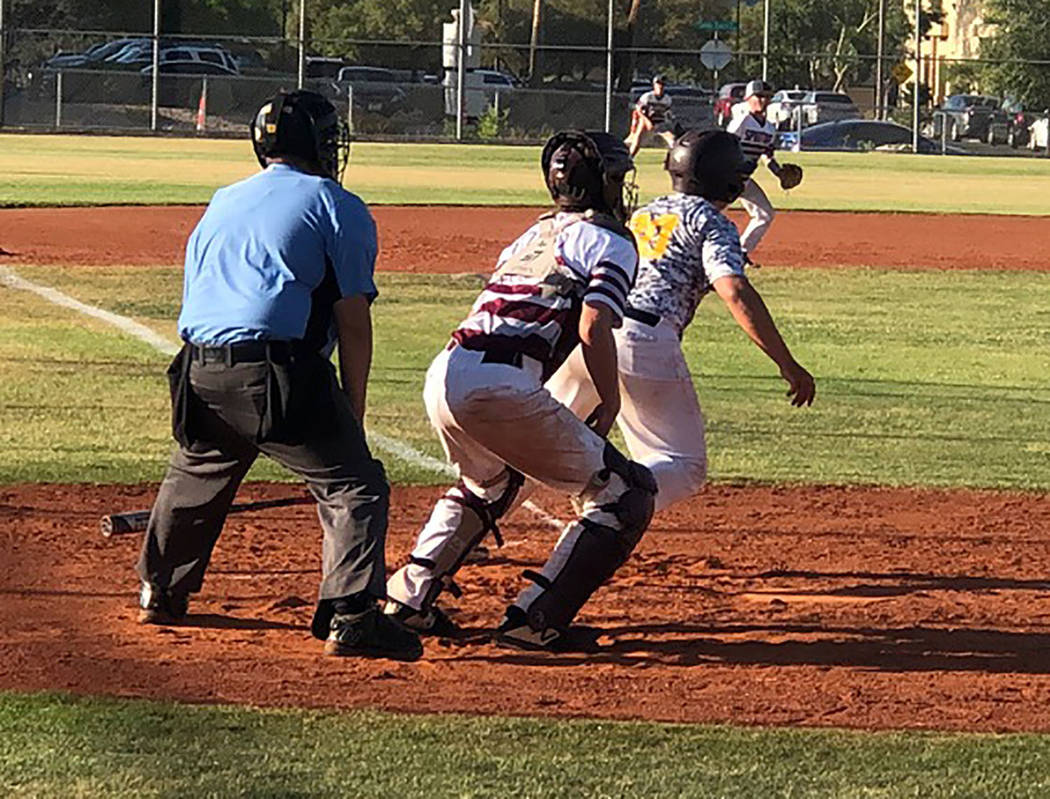 Tom Rysinski/Pahrump Valley Times The Pahrump Trojans 14U baseball team managed just five hits, two of them infield singles, during an 8-2 loss to the Las Vegas Spartans on Wednesday in Las Vegas. 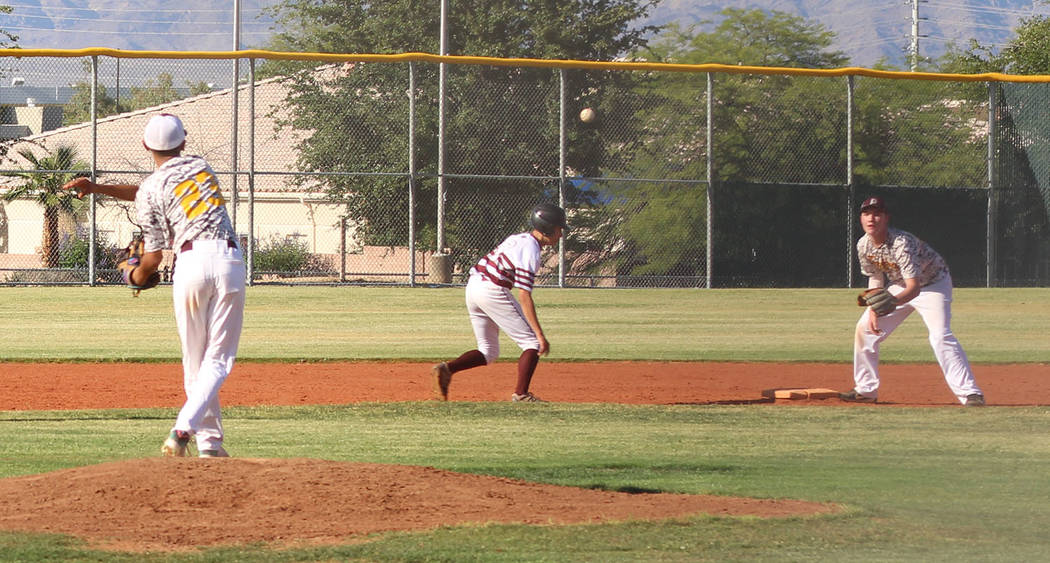 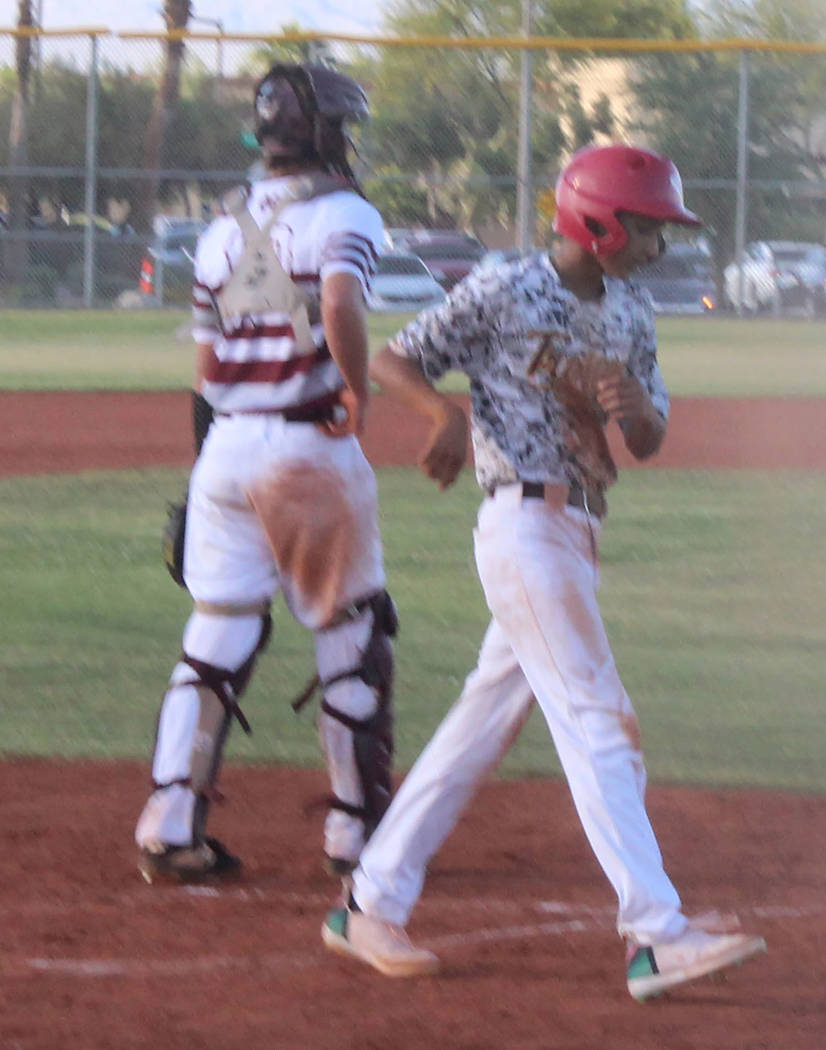 Tom Rysinski/Pahrump Valley Times Pahrump's Fidel Betancourt heads to the dugout after scoring the Trojans' second run during the third inning of Wednesday's 8-2 loss to the Las Vegas Spartans in a 14U Connie Mack baseball game in Las Vegas.

The biggest problem faced by the Pahrump 14U Connie Mack team early in the season appears to be the starting times of games.

Since a season-opening 4-3 win over the Summerlin Panthers on May 27, the Trojans have fallen into an unfortunate pattern.

“We’ve lost four in a row now, and I just told the boys it’s our slow start right now that’s killing us,” Trojans coach Tom Metscher said. “We’ve fallen in a hole in each of those games. Once we settle down and kind of find our rhythm, we’re competing and playing well. It’s getting out of that initial hole and getting those kids focused, and that’s part of the learning process.”

Putting that into practice will have to wait one more game, as the Trojans fell into a 4-0 hole after one inning and never caught up in an 8-2 loss to the Las Vegas Spartans on Wednesday night at Cimarron-Memorial High School in Las Vegas.

The first five batters reached base against Pahrump starter Fidel Betancourt, who seemed to rediscover his effective breaking pitch after a mound conference. He caught the next two batters looking at strike three before walking two to force in another run, and it was 4-0 Spartans.

But Betancourt settled down after that, now allowing a ball to leave the infield over the next two innings and getting a nifty double play from James Metscher to Leo Finkler to Ethan Gavan to end the third.

By then, the Trojans had cut the lead in half. Austin Sandoval led off the third with a single, the third consecutive inning the Trojans had the leadoff batter aboard after James Metscher opened the game with a single and Dallton Norland started the second with a double. One controversial out later — James Metscher appeared to beat a throw to first on a grounder to second that was bobbled, ruining the Spartans’ chances for a double play — a Betancourt single put runners on first and third.

Betancourt then headed for second base on a steal, and when the throw went into the outfield, Sandoval came scampering home. Betancourt wound up on third and scored on a grounder by Louie Sposato, and the lead was 4-2.

But that was about it for the Trojans’ offense, which managed just two singles the rest of the way as Spartans pitchers retired 14 of the last 16 batters they faced. Walks and defensive mistakes helped the home team push across 2 runs in the fourth and 2 more in the sixth, but they were hardly needed.

Tom Metscher believes his team is better than its record, and getting off to better starts will reverse its struggles. With a roster filled with players who are either entering high school or just finished their first year, he has his team doing pretty much what their older counterparts are doing.

“We do everything we can to try and emulate the high school program’s environment, from the way we practice, the way we warm up,” he said. “We try to carry that over into an attitude. Sometimes that works well.

“Trying to reel them in and get them to follow suit can sometimes be a challenge.”

But Metscher knows he has some talent on this team as well as some experience.

“We do have some leadership here,” he said. “We have some kids that were on this team last year, so we look to those guys for guidance and help.”

The roster includes three players who were on the high school junior varsity this season in James Metscher, Gavan and Norland.

“We have those three freshmen, and kids who have all-star experience from the junior level,” Tom Metscher said. “We’re going to count on them for our all-star team this year, and we’re going to host that tournament this year, so that’s very special to us.

“We want to have a good showing and come out and perform in front of our friends and family.”