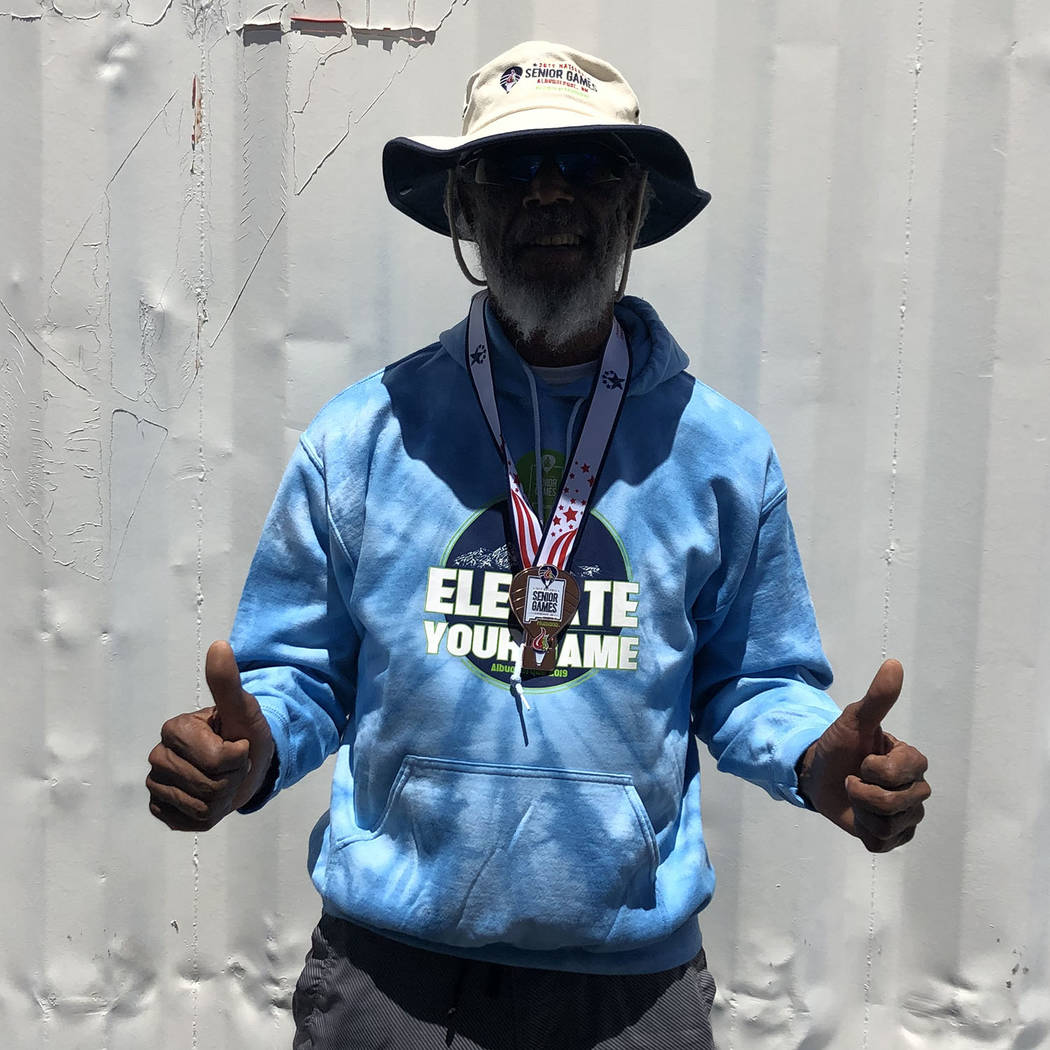 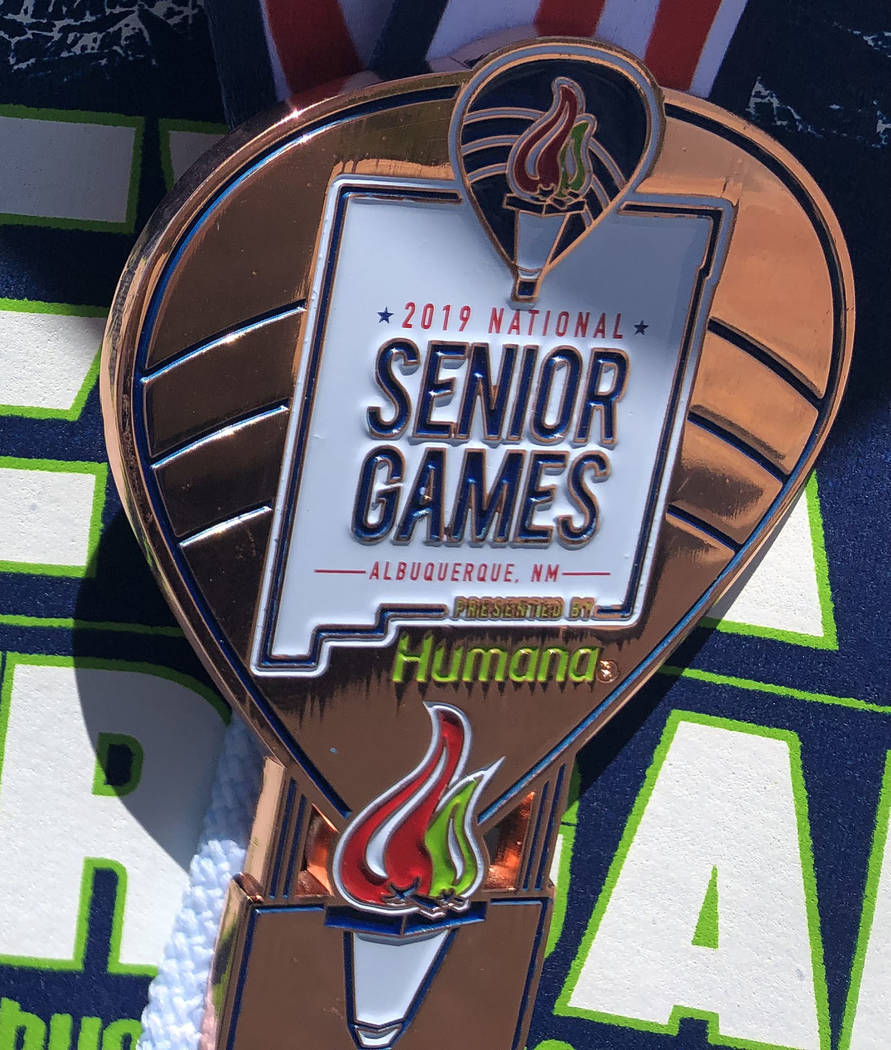 Tom Rysinski/Pahrump Valley Times Marvin Caperton of Pahrump shows off the bronze medal he won for finishing third in the 200 meters in the 65-69 age group at this year's National Senior Games in Albuquerque, New Mexico.

Marvin Caperton is used to going to local and regional senior track and field competitions and bringing back a haul of medals. But even the confident Caperton was impressed with what he was able to do in Albuquerque, New Mexico.

Caperton ran the 200 meters in the 65-69 age group in 27.86 seconds to finish third, capturing the bronze medal at the National Senior Games.

“High altitude helped a lot,” Caperton said, noting he ran personal bests in both the 50 and 200. He also ran in the 100, but he was disappointed with his showing in the shorter sprints.

“It seems like I couldn’t get going, I don’t know what it was,” he said. “I thought I was running fast, but everybody was in front of me. So I was all dejected.

But any disappointment was erased in the 200, when Caperton captured his first individual national medal. He had medaled in a relay but not in an individual event.

“When it came time for the preliminaries in the 200, Oscar Peyton is the fastest man in the world in our age division and he was in my heat, so I figured if I stay close to him I’ll do well,” Caperton explained. And it worked, as he qualified third in 28.16.

“When it came time for the finals, I envisioned being third because the guy that ran the fastest time, 26.6., ended up taking second and I was chasing him and Oscar.”

Peyton, 67, of Maryland did finish in first place, while Michael Kish, 68, of New Jersey finished second, barely a half-second ahead of Caperton.

“All the work kicked in,” he said. “I was able to accelerate. I couldn’t catch them two, but nobody else could catch me.”

A person as competitive and confident as Caperton quite naturally looks forward to the next opportunity. The National Senior Games are held every two years, and the 65-year-old plans on making his fourth trip to the event in 2021.

“Oscar’s got two more years, and then he’ll be out of my division,” he said. “The next nationals will be in Fort Lauderdale (Florida), and I expect to do real well there.”

Caperton echoed Pahrump’s other competitors who made the trip to Albuquerque in raving about the overall atmosphere at the event.

“It was great,” he said. “People were fantastic, the volunteers, 14,000 athletes showed up in Albuquerque.”

About the only thing Caperton found to complain about was the lack of warmup space for sprinters, but he even turned that to his advantage.

“It was grass, and it hadn’t been cut,” he said of the field near the track the athletes had to use. “People were turning ankles, and there were some injuries as a result of not being able to warm up. But I work out on grass, so I was cool there. I work out at Simkins Park, and the only time I go to the track is to do starts. I like to save my meniscus and save my knees from all the beatings, so I work out on grass.”

It was the only negative Caperton could muster about an event, as winning his first individual National Senior Games medal made him “ecstatic.”

He did, however, bring back a funny story from Cleveland.

“I used to smoke cigarettes,” Caperton admitted. “I smoked for about 20 years. I got fourth in Ohio in the 50. The person who was helping me out, after I finished, I got in her car and fired up a cigarette. She said, ‘What’s wrong with you?’ I said, ‘What do you mean?’ She said, ‘You just took fourth in the nation and you’re firing up a cigarette?’ That was it. I haven’t smoked since.”

No cigarette ever gave Caperton the feeling he got from being on the track in Albuquerque.

“I was running with Oscar Peyton, the fastest man in the world,” he said. “And he was right here, right next to me. That was so awesome, such a feeling.”

Caperton said he had a lot of people to thank.

“I want to give big thanks to my sponsors,” he said. “Mike Floyd, who is a gold sponsor; Tim Hafen, who is a silver; Dr. George Leaks is a silver; Ray at Nevada Realty is a bronze; Sean at the Stage Stop, another silver; Jessica Giannino also contributed a silver amount.

“The Pahrump Valley Times has been great, they cover everything I do, Pahrump Valley High School should be mentioned because they allow me to access their track at all times, Nevada Treasure RV Resort is where I do my working out. They’ve helped me, they sponsored me.

“All you folks, I love all of you, and we’re going to do better. That goal is being No. 1 in the world.”