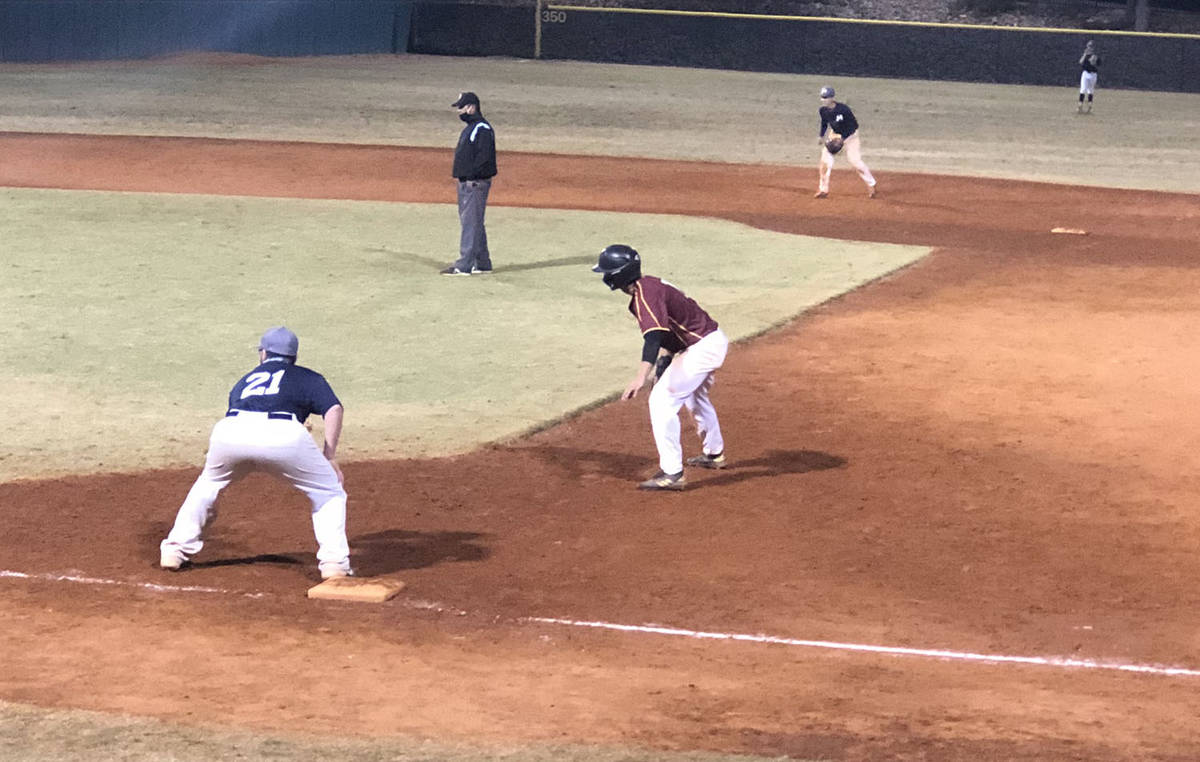 Tom Rysinski/Pahrump Valley Times Pahrump Gold's Jalen Denton takes a lead during a Vegas Valley Baseball League game against the Enterprise Lions on Oct. 30 at Arroyo Grande Sports Complex in Henderson. Denton drove in a run and scored a run in the Trojans' 5-1 victory. 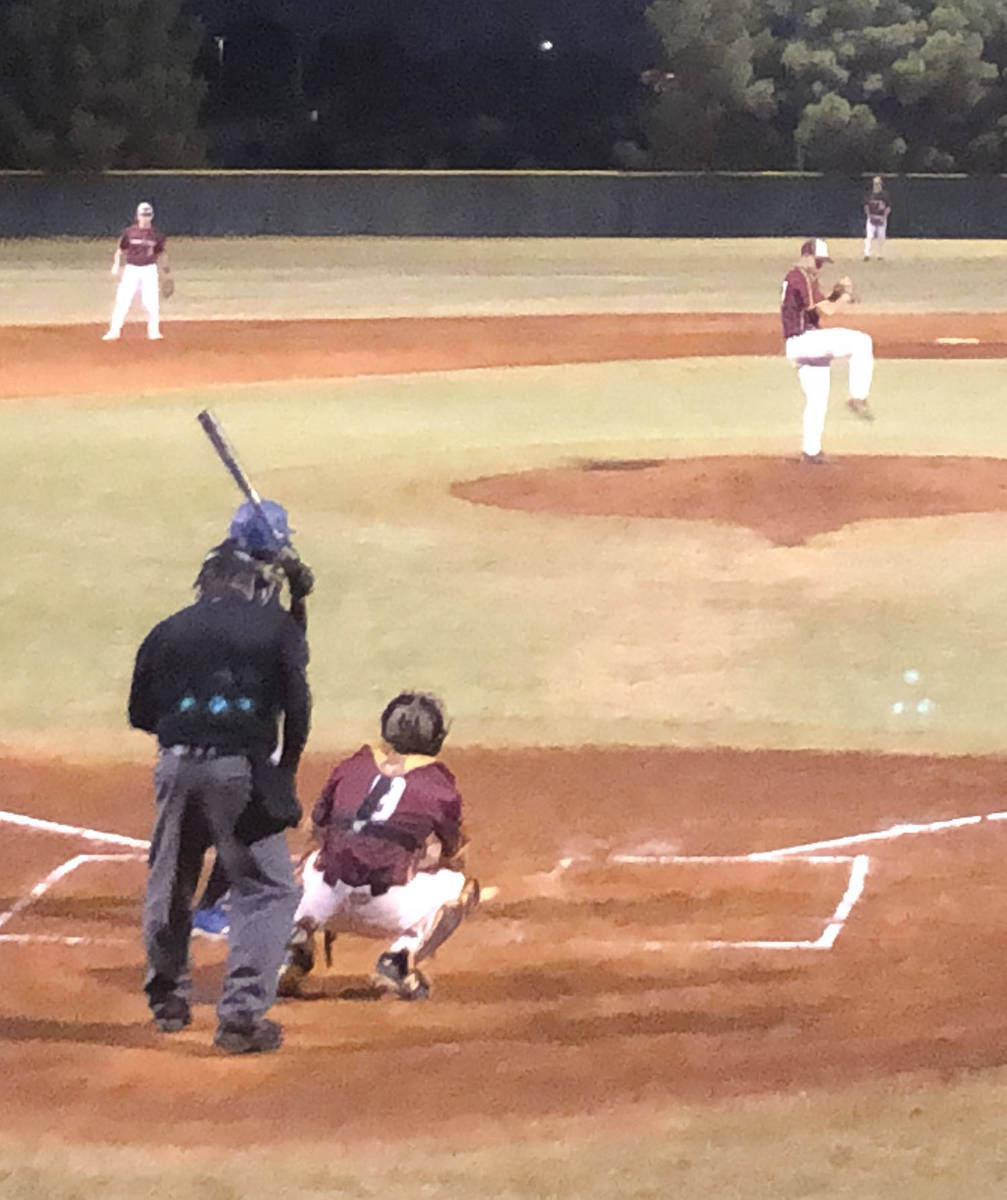 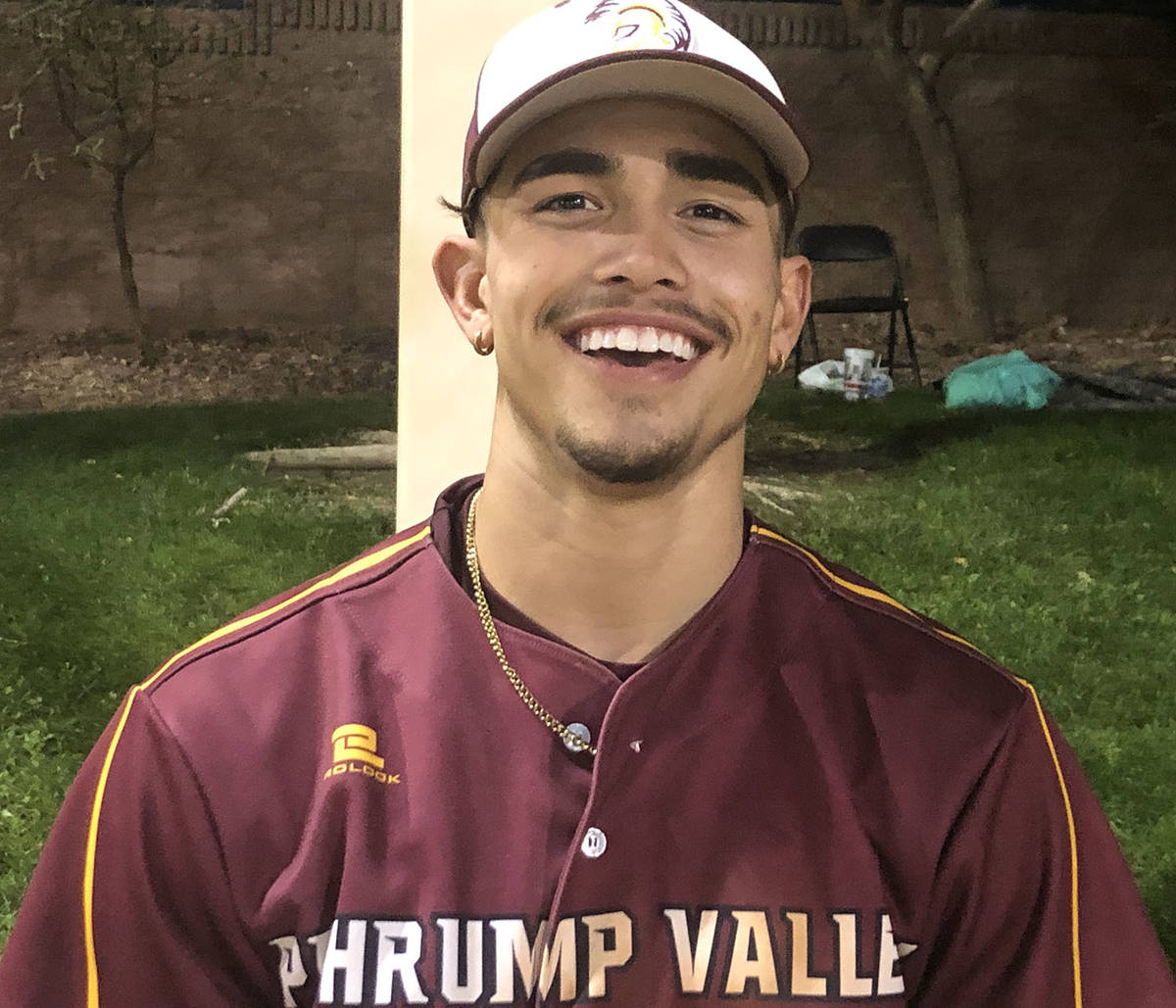 “Jalen is an excellent baseball player, a great student and an even better person,” said Hayes, Pahrump Valley High School’s varsity coach. “I still remember when I received a call from him in the middle of our summer season his incoming freshman year. He said he just moved in from New Mexico and wanted to play baseball for us in the summer.

“That was the first indicator to me that this could be a special player — considering he was showing that initiative, finding a place to play immediately when he moved into town.”

“Three summers ago, when he first came out here, we were in the middle of our Connie Mack season,” Middleton recalled. “Hayes messages me and says we have this new kid from New Mexico, and he wants to try out. I’m like, sure, let’s see what he’s got.

“Our older team was playing and we were just in the back cages of Honeysuckle. I threw him two balls, and after that I stopped and texted Hayes. You need to come down here, because this kid’s legit. The first two balls he saw he just ripped into the back of the cage. This kid’s special. He hit .600 for us that summer and averaged like a triple a game, which is just insane.”

Even then, it was obvious to Hayes and Middleton that Denton could play at the next level.

“I never really knew about the recruiting process, so we kind of started late,” Denton said between Vegas Valley Baseball League games in Henderson. “At first, it didn’t really work out. Some colleges would talk to me, and a couple of them did email me, private schools, like D-II and D-III. I considered going to one of them, but the price was above 50 grand.”

Enter Williston State in North Dakota, a two-year school of fewer than 1,000 students in a small city 60 miles south of the Canadian border and 18 miles from the Montana line. Williston coaches saw Denton’s recruiting profile on a website, and he noticed.

“I emailed them and talked to the coach a little bit,” Denton said. “I sent them a video, and he was like, you look pretty good, and I think you would be great in our program.

“I thought about it for a few days. I talked to my parents, and they were just like, if that’s where you want to go and that’s the best option right now, then you should go.”

“At first I was hoping he would get a four-year offer so he wouldn’t have to switch, but all of the schools that were looking at him were pricey, all private schools,” mom Torrie Denton said, mentioning Lewis &Clark College in Oregon and the University of Puget Sound in Washington as possibilities before her son settled on Williston. “It’s far, but I think it’s going to be good for him.

“I guess in the end I didn’t want to have a major role in the decision, because it’s his life. I wanted him to go where he felt comfortable.”

Denton said he has been playing baseball nonstop since he was 4, squeezing in soccer as a PVHS freshman and football during his sophomore and junior years. But circumstances have limited him to a relatively small number of high school baseball games.

“Pitching-wise he’s grown up a lot,” Middleton said. “He struggled his sophomore season. We worked on mechanics and on being consistent, and he’s made the adjustments and has looked really good since.”

Then the pandemic wiped out all but the first four games of his junior season, in which Denton managed to squeeze in 5 hits, 2 doubles, a triple, 2 RBIs, 8 runs and 5 steals with a .750 on-base percentage. But he has played summer ball and, this fall, for the Trojans Gold club entry in the Vegas Valley Baseball League.

Denton will see a familiar face at Williston State, where former Trojans softball player Terrena Martin is a first-year student. Denton had reservations about taking that path.

“At first I didn’t want to go the JUCO route, but I thought I could gain experience and see how college life is, and if I do well both of my years I can go somewhere bigger,” said Denton, who plans to study business and economics.

“Jalen is a bright young man that seems very driven to have success,” Tetons coach Mason Przybilla said. “We put a strong emphasis on our student-athletes’ academic performance. By doing so, our second-year guys will graduate from our institution on time. This allows them to move on and continue playing at four-year schools.

“The goal of a JC is to develop players and move them on. This year will be no different. We are losing a number of key position guys as well as major roles in our pitching staff.”

Przybilla said Denton will have an opportunity to be a two-way player, patrolling the outfield in between turns on the mound. Denton noted the Tetons do not have any left-handed pitchers, so he could fill a need.

“In the fall we would like to make an attempt at both,” Przybilla said. “After the fall we will make a decision on whether he will specialize in one area or continue as a two-way guy. We want to make sure he spends more time doing what is the most projectable for four-year schools.”

“He has to work on a little bit of stuff to pitch at the next level, but he has the stuff to do it,” Middleton said. “But he’ll definitely be a starting center fielder with his range, his arm and his bat. He’ll be a top-of-the-order guy.”

“He can hit for average and power, he can get on base, he can cover ground on defense, and he can throw,” Hayes said. “He works his tail off in the weight room and at practices. He is always the guy that we can use as an example for our younger guys to follow.

“Even more important, his character off the field is unquestioned. He is one of those kids that you hope your own children emulate when they grow up. Jalen is my own kids’ favorite player on the team. They love him!”