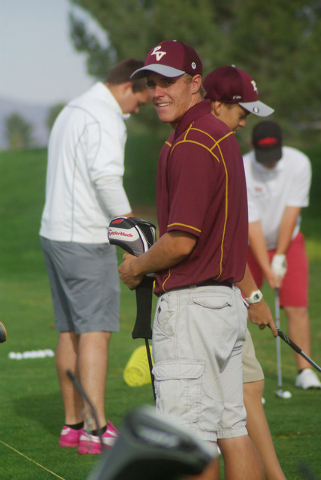 In prep golf at Wild Horse Golf Course in Las Vegas it was a wild time as the Division 1-A Southern Regional Golf tournament came to a close.

Faith Lutheran finished with an 810 and Boulder City an 826. Pahrump Valley finished with an 889 to finish in third. All three teams qualified for the Division I-A state tournament along with the top five individuals from non-qualifying teams.

This will be the second year in a row that the Trojans have qualified for state.

Trojans Coach Bob Hopkins was excited just to be in the state tournament at the Trojans home golf course.

“The winds were high and this gave us some trouble. We will be working on our putting because we didn’t do that well with that on the second day,” Hopkins said.

Hopkins said his team is young and they are gaining valuable experience from being at state two years in a row. He also said being on home turf should give his team a boost.

The southern teams will be facing Lowry, last year’s state champion, Elko and Spring Valley. Lowry has a team average of 394.7, Elko has a 422.4 average and Spring Creek is at 436.7.

Both Magruder and Logan have an advantage over the north having golfed at Mountain Falls.