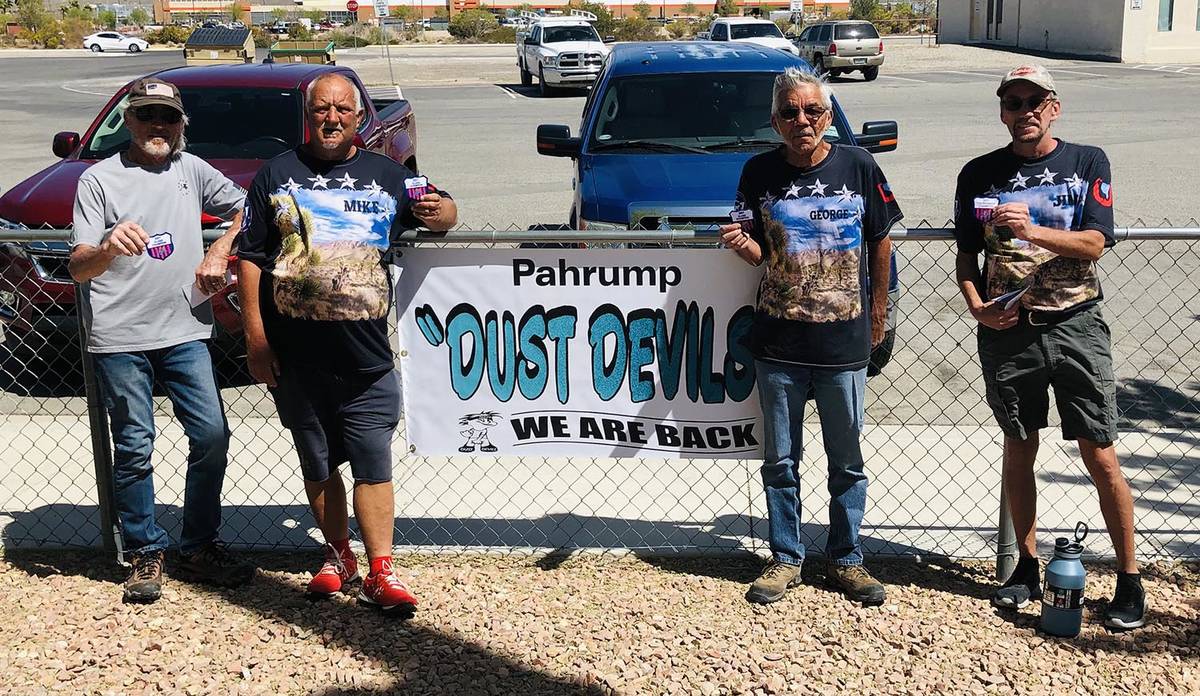 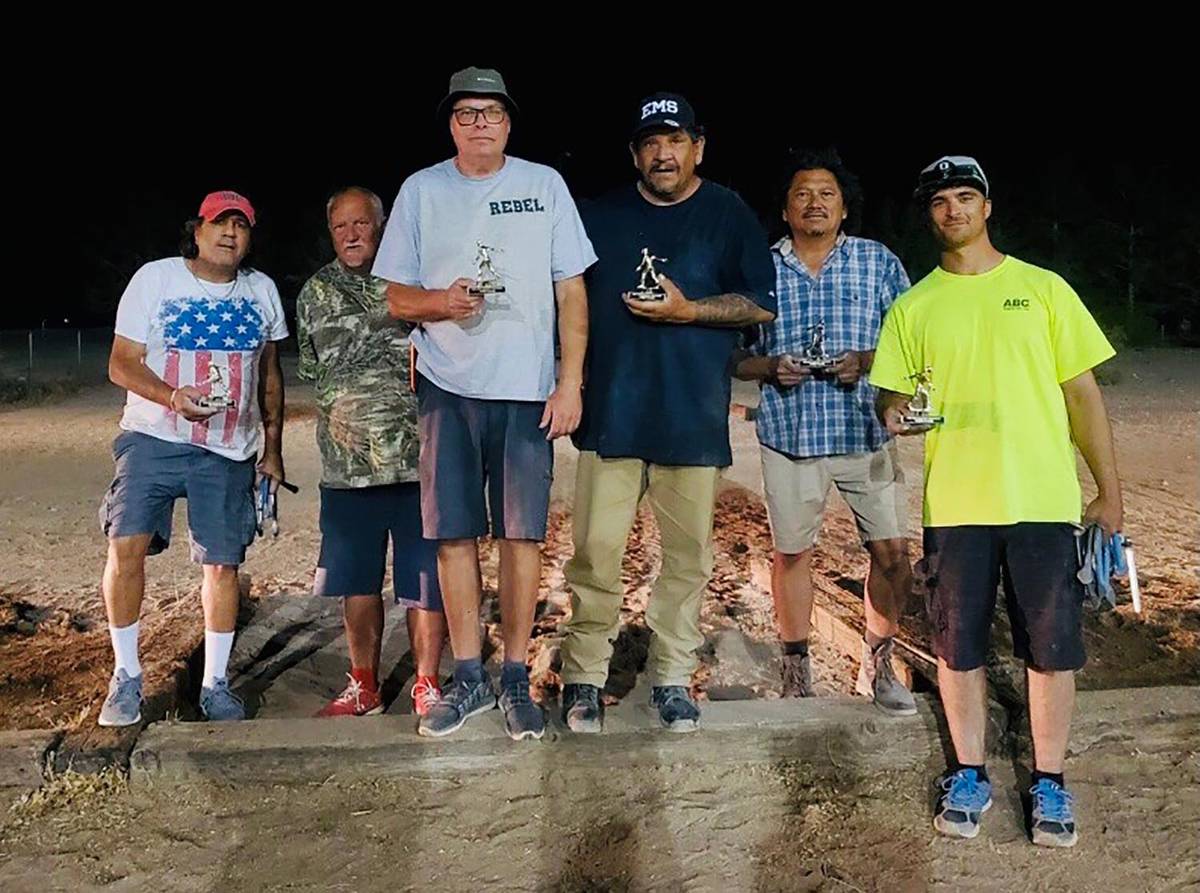 Jennifer Lindsey/Special to the Pahrump Valley Times From left, the second-place team of DJ Zuloaga and Mike Dedeic, winners Lathan Dilger and Benny Sanchez, and the third-place duo of John Denilofs and Jefferson Counts after a horseshoes tournament hosted by the Amargosa Racetrack Committee on April 10 in Amargosa Valley. 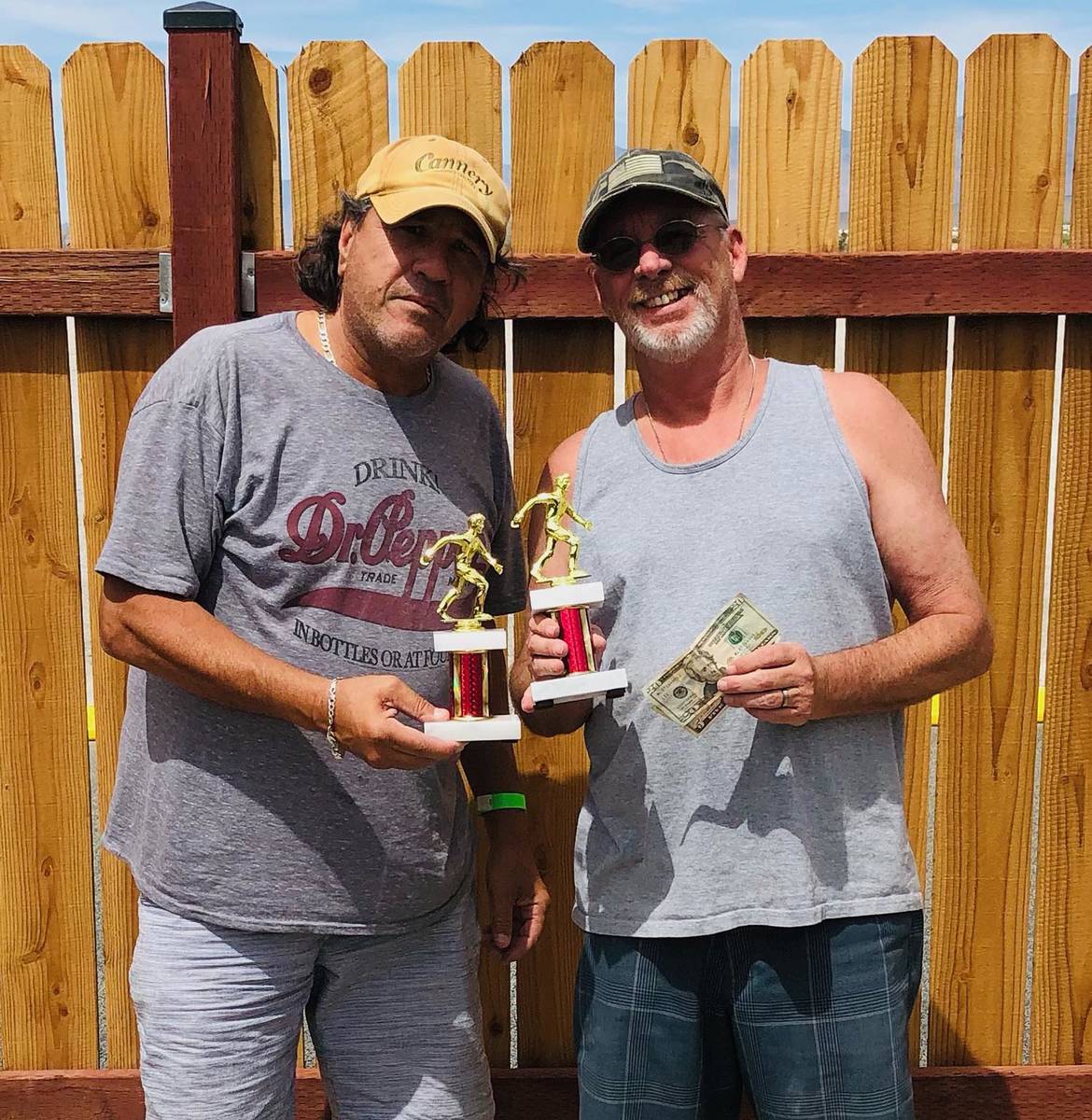 Lathan Dilger/Special to the Pahrump Valley Times DJ Zuloaga, left, and Mark Kaczmarek won the inaugural horseshoes tournament in the Spring & Fall Fling Horseshoes Pitching Series on April 11 at the Pahrump VFW. The second event in the series is Sunday in Sandy Valley.

First was the Don Weaver Memorial on April 3 in Las Vegas, a Nevada State Horseshoe Pitching Association-sanctioned tournament in which each division was won with an undefeated record. Jim Hatch of Pahrump stormed through Class A, going 7-0 with 70 ringers and 340 points to claim the tournament championship, with Bob Miller of Richfield, Utah, and Lathan Dilger of Pahrump each going 4-3 in the round robin.

Scott Hardy of Las Vegas went 7-0 to claim Class B, racking up 73 ringers and finishing 6.70 percentage points above his entering percentage. George Mallory of Pahrump went 5-1-1 to place second, and Jeff Corwin of Kingman, Arizona, at 3-3-1 was the only other pitcher to go at least .500 in the division to take third.

There were three tournaments the following weekend, starting with the NHPA-sanctioned Don Brown Open at Petrack Park in Pahrump. This time, Hatch and Hardy were in the same division, with each losing one game and totaling 85 ringers in Class A. Hatch won the playoff to claim his second consecutive title.

There was also a playoff in Class C, in which Jefferson Counts and Mike Dedeic of Pahrump duplicated Hatch and Hardy by tying in both round-robin records and ringers. Dedeic won the playoff.

“It’s very uncommon to have the same amount of ringers and wins and losses, but to have two in the same tournament is unbelievable,” said Dilger, the president of the NHPA and SNHPA.

Mallory won in Class B, while newcomer Jim Bergstrand of Pahrump won Class D. Dilger said there were two new pitchers at the Don Brown Open, with Bergstrand joined by Robert Brown of Mount Charleston.

The second tournament, later that day in Amargosa Valley put on by the Amargosa Racetrack Committee, drew 22 players divided into 11 teams.

The third tournament was Sunday, the first event in the new Spring &Fall Fling Horseshoe Pitching Series. Ten bars throughout Southern Nevada are involved in the series, with the first tournament hosted by the VFW Pahrump Post 10054.

“I’d like to thank the VFW commander and staff for a great time,” Dilger said. “The breakfast I had was delicious. They serve breakfast every Sunday morning there.”

Dilger said everyone is welcome to compete in the Spring &Fall Fling tournaments, and the next one is 10 a.m. Sunday, April 18 at the Idle Spur Tavern at 165 Quartz Ave. in Sandy Valley.