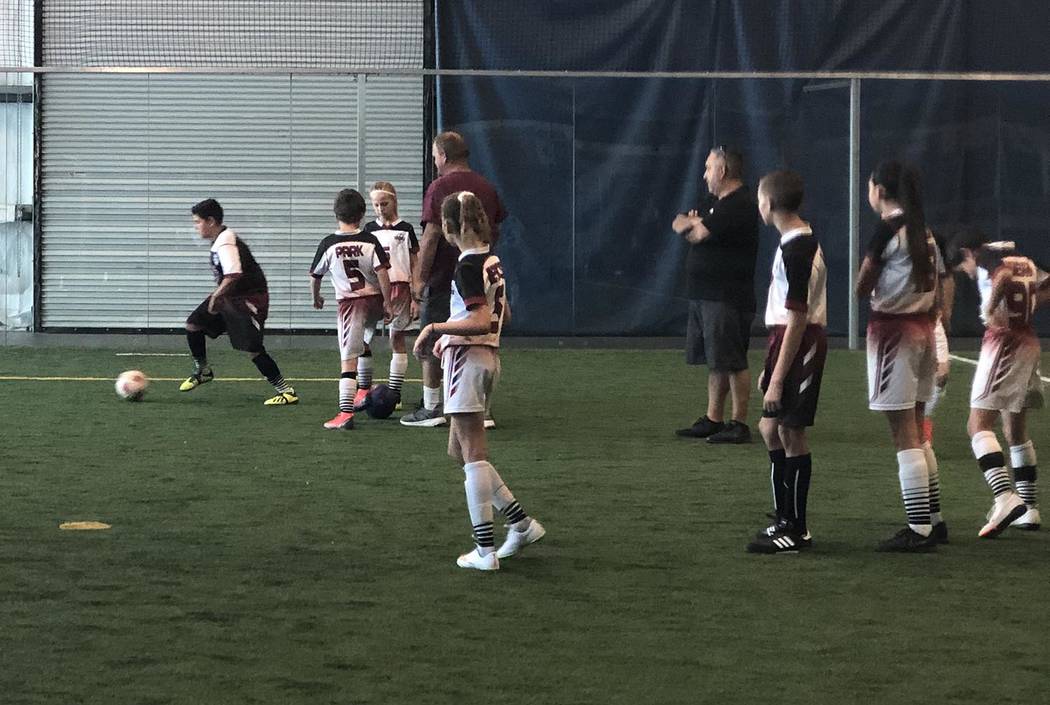 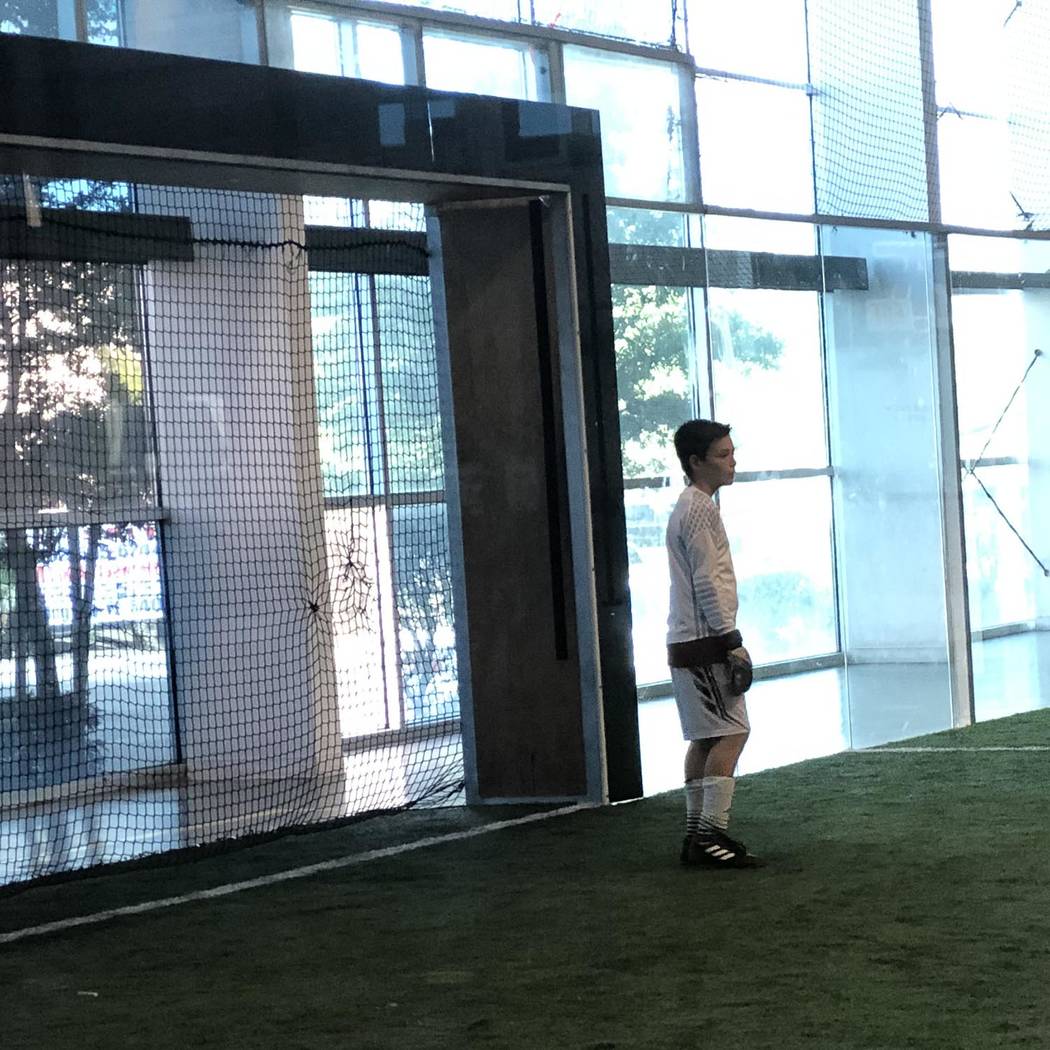 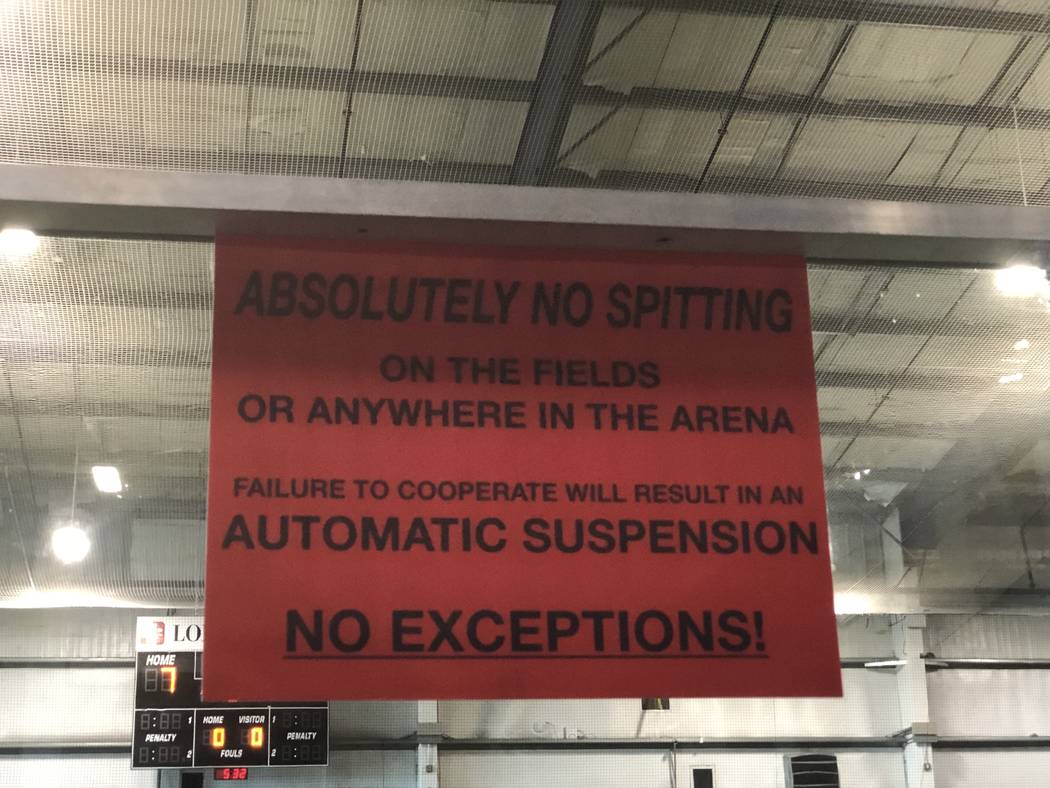 Tom Rysinski/Pahrump Valley Times Longevity Sports Center takes some elements of decorum very seriously, as evidenced by this sign hanging between the team benches at one of the facility's indoor soccer fields. 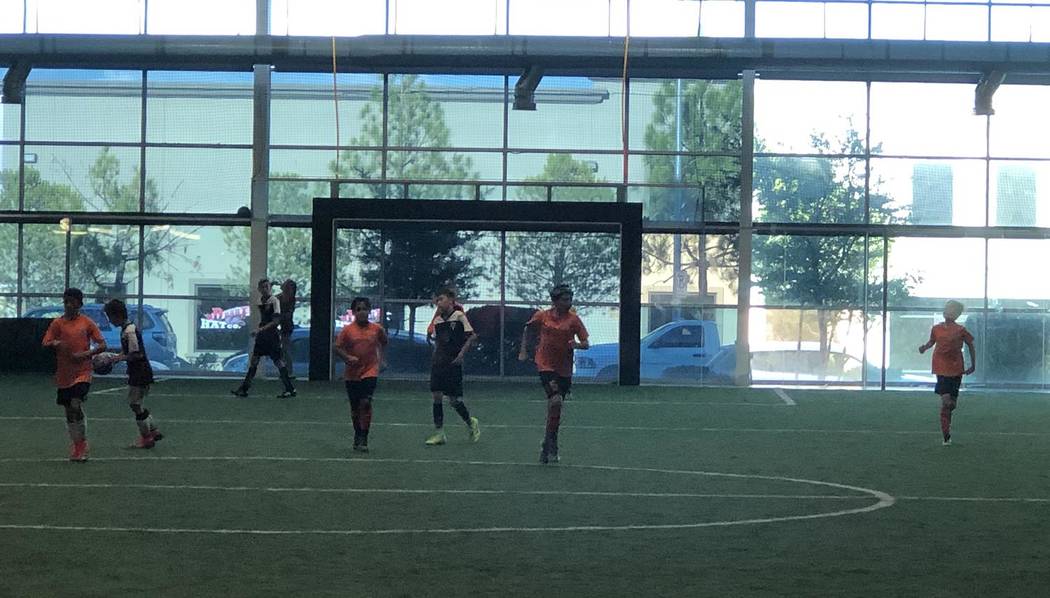 Tom Rysinski/Pahrump Valley Times Players for the Pahrump Junior Trojans Black and Heat FCAI head back to midfield after a goal during their game Saturday at Longevity Sports Center in Las Vegas. 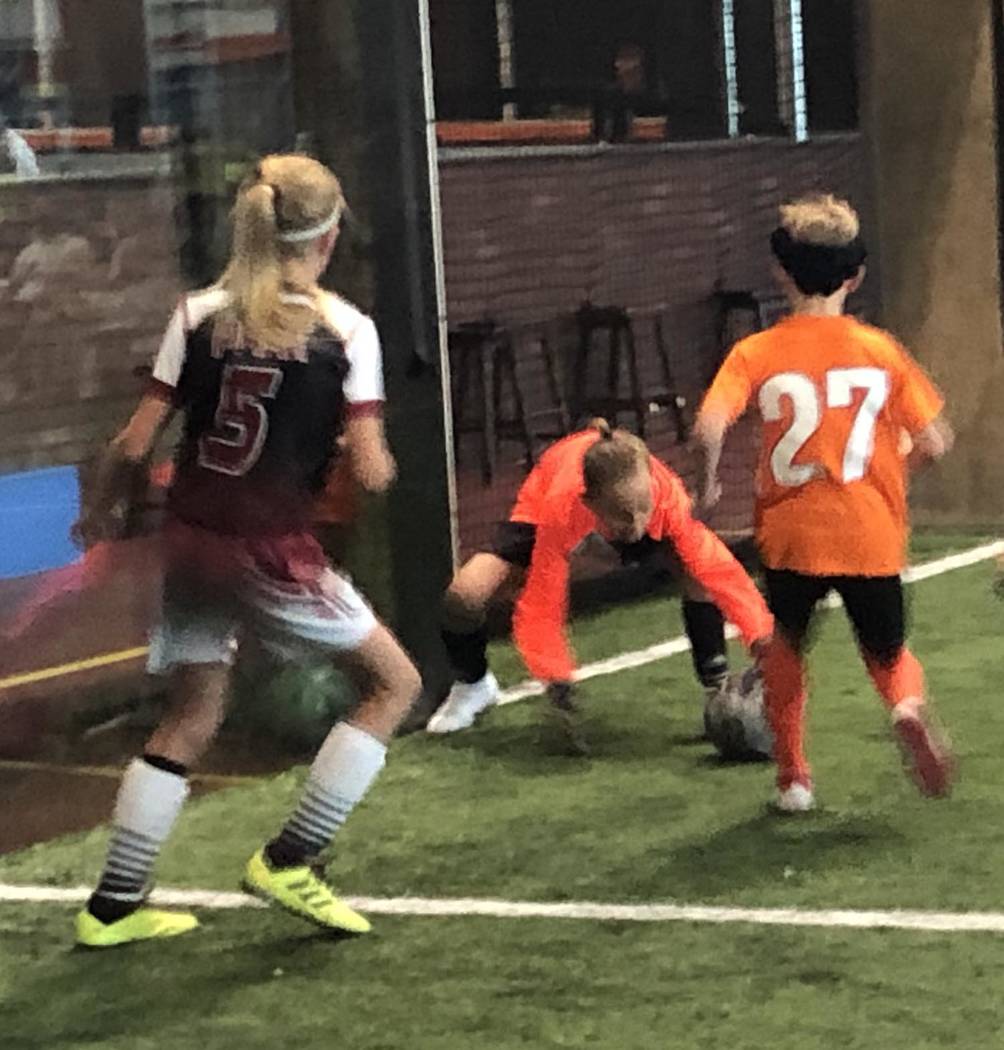 Booey McClard has played a lot of sports during his 11 years, but this summer he’s doing something new to him.

“I just had a break from all the other sports and I wanted to have something to do,” said McClard, who said he has played football, baseball and basketball. “So I played indoor soccer.”

Of course, even most of Pahrump’s young soccer players are new to the indoor game. But Dusty Park of the Junior Trojans Soccer Club, who coaches the teams of kids born in 2007 and 2008, believed a summer season could help his players get better.

“I played as a kid and we just looked into it and decided in the off-season we wanted to keep playing,” Park said Saturday at Longevity Sports Center in Las Vegas, which has two fields for indoor soccer and another miniature field for younger players.

“Indoor makes them a little bit stronger, tougher player because they’re getting beat up against the boards. The speed of the game is a lot faster, the ball movement, the touches on the ball are very important, and we’re hoping to take that to the outdoor game.

“The more touches they have on the ball, the more field experience whether it’s indoor or outdoor, it’s only going to help them get better. They’ll get better just from the experience. You’ve got to play a lot.”

The Junior Trojans are fielding two teams in the summer league, with rosters of boys and girls born in 2007 and 2008. They play coed, which is just fine with 11-year-old Alaina Jackson.

“It’s really fun,” said Jackson, who said there is no more problem playing with the boys than transitioning to the indoor game. “At first I was really nervous, but it’s actually not that bad. It’s pretty much the same. It was pretty easy to pick up.”

Her teammates agree, although playing in goal indoors is a very different animal.

“It’s a faster pace because of the smaller field,” said Joshua Slusher, 11, who plays defense on the left side when he’s not the keeper. “That’s the harder part, but it’s also easier because it’s a smaller goal.”

“It’s a little bit harder because the grass is shorter and the ball moves faster,” said Aaron Castillo, ordinarily a goalkeeper but on offense during the Trojans White’s game against LSC Greyhounds. “I did good. I scored a hat trick. I’m double-rostered, so I play for both teams now.”

Although Castillo and his cousin, Adrian Dominguez, are the only Junior Trojans with indoor soccer experience, Castillo claims his favorite sport is baseball. Just a week before Saturday’s games, he was playing with the Pahrump Little League All-Stars in a park not far from Longevity Sports Center.

That’s definitely not the case for Caleb Sierra, a left wing who took a turn in goal during the first game Saturday. Against a weaker opponent, Park had several players at different positions, and Sierra had fun in goal, although he didn’t get much action.

“I like to score, but defense is pretty fun also,” Sierra said. “Goalie, my first time, was fun, too.”

Sierra’s best save came in the final seconds, as he leaped to his left to deflect a shot.

“I kind of saw it out of the corner of my eye, but I didn’t know it was going that fast,” Sierra admitted. “I just jumped.”

Despite the positive experience, Sierra is perfectly happy at left wing, indoors or out.

Sierra was talking about the outdoor game, of course, but indoor soccer has been a professional sport for some time. The Major Indoor Soccer League ran from 1978 to 1992, had franchises in major cities and five times averaged more than 10,000 fans league-wide, peaking at 12,514 in 1986-87. The league even spawned a legitimate superstar in Steve Zungul, lauded on the cover of Sports Illustrated as “The Lord of All Indoors” while winning league MVP honors six times.

Today, the Major Arena Soccer League is plugging away, with some of the same franchise names as the old MISL. But it also has teams in such non-major league cities as Utica, New York, El Paso, Texas, and Tacoma, Washington, and it operates well under the radar.

But a future career in indoor soccer is not the driving force behind the Junior Trojans Soccer Club participating in the summer league. Playing more soccer provides more experience for Pahrump’s young players, even if the game inside is a bit different than the game outside.

“They don’t let you head, unless both teams agree to it, no slide tackling at all,” Park said. “Other than that you have the wall and everything else is pretty much the same. The keeper can’t punt the ball from one end to the other; there are three touch lines, if it goes past all of them it’s the other team’s ball.”

And using the boards is an art that takes some practice. It is especially common near the opponent’s goal, as players will pass the ball to teammates in front of the net by making the ball carom in front of the keeper.

“In the beginning we were lost with that, but they’re starting to use the wall,” Park said. “They’re not using it perfectly yet, but by the end of the season we hope they will be.”

The season goes by fast; after Saturday’s expected easy victory for the White team and equally expected tough loss for the Black team the Pahrump squads are a combined 11-3. But just having a soccer team to play on during a time of year kids usually don’t is reason enough for some.

“I like being able to have a team,” Jackson said. “Working as a team is fun, and making new friends. And we’re doing pretty good.”