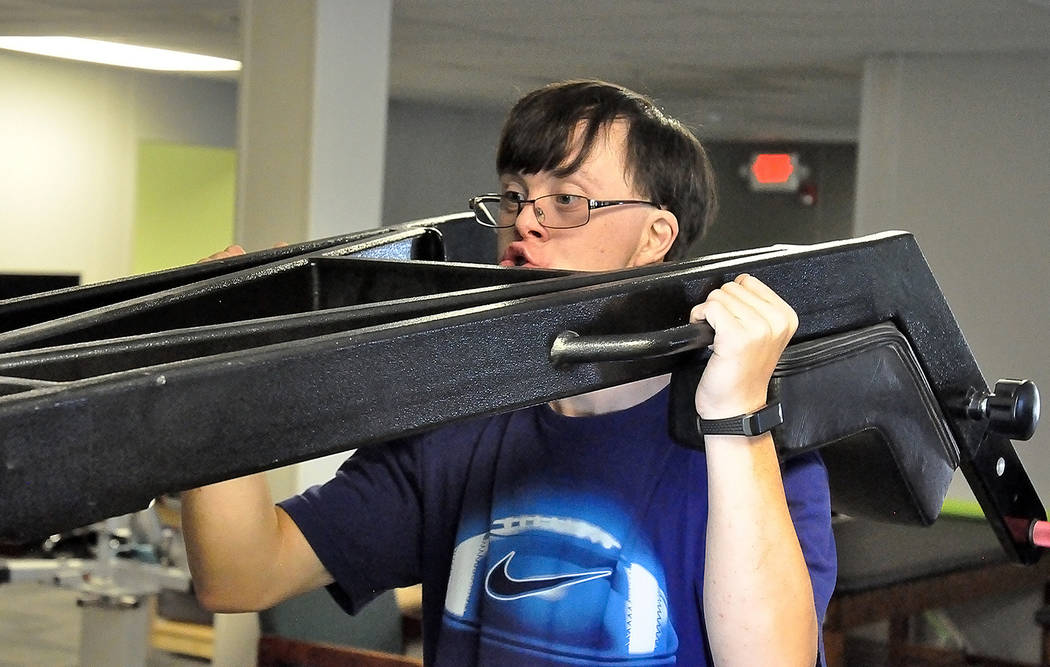 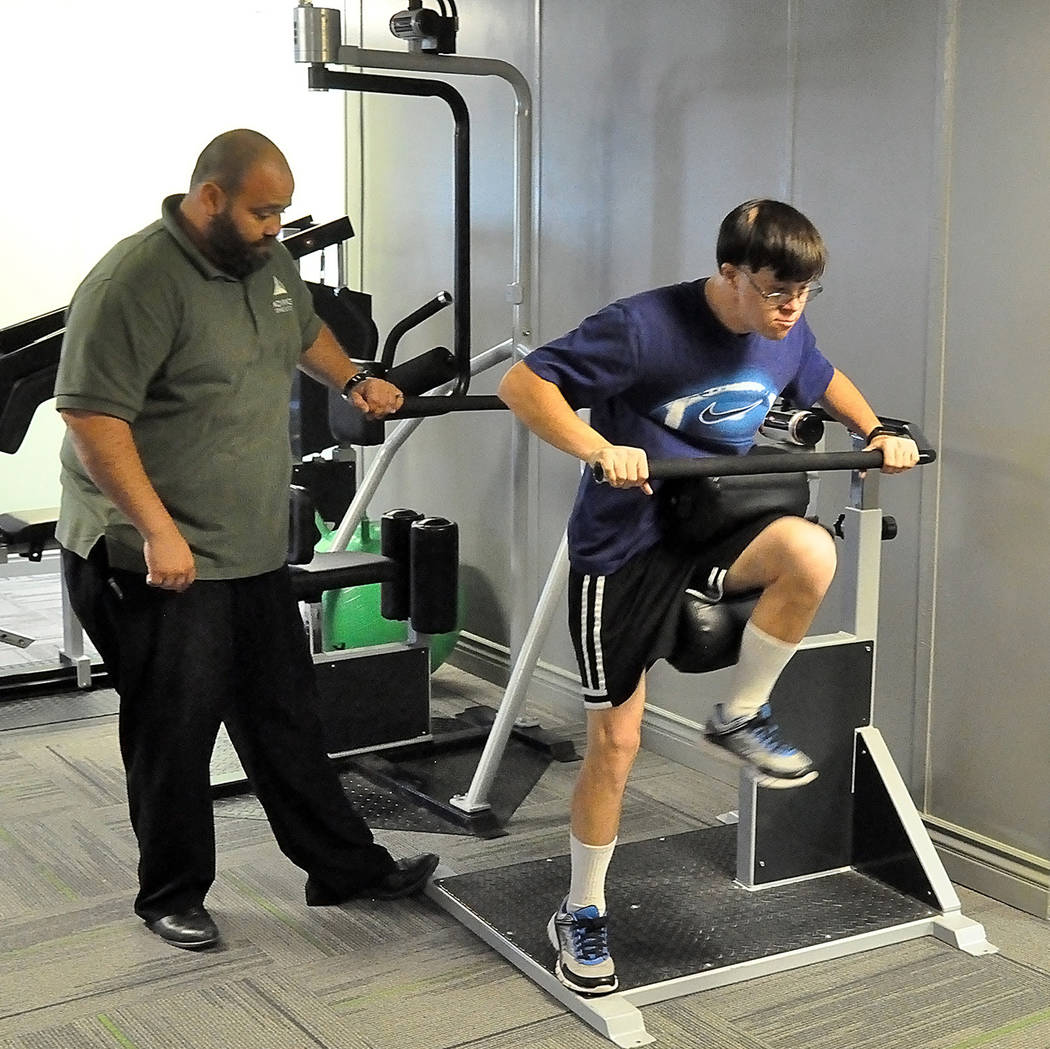 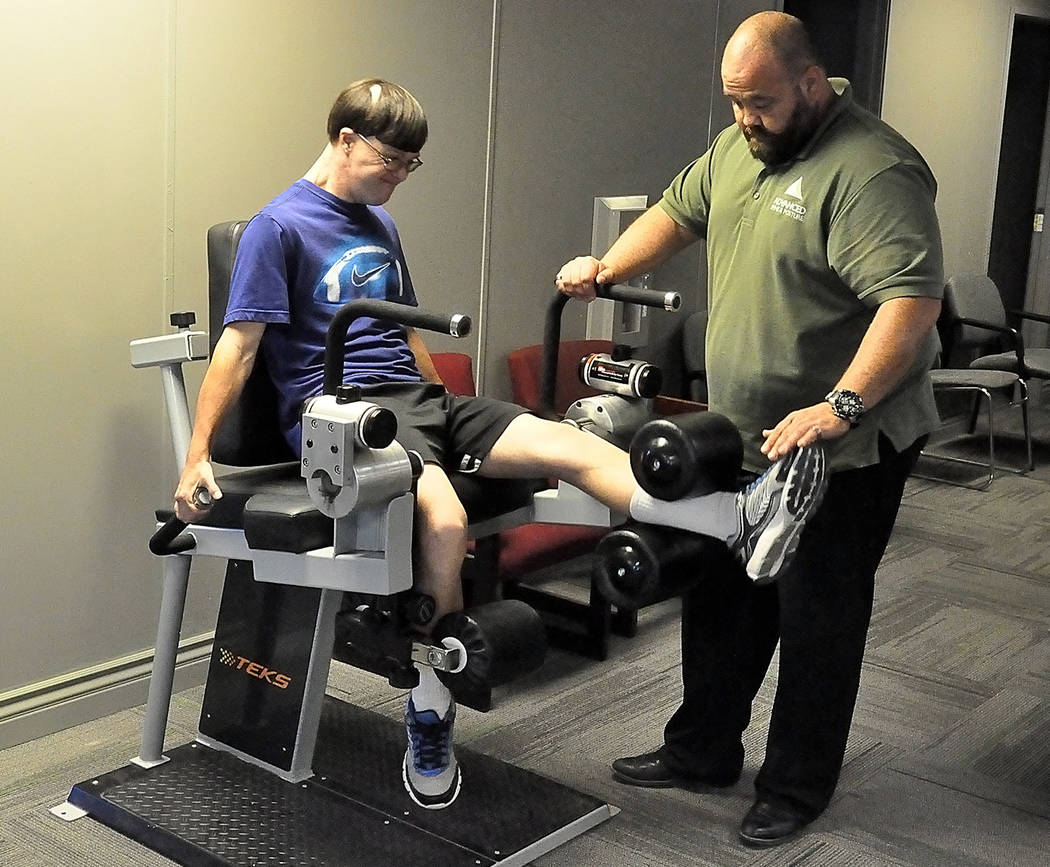 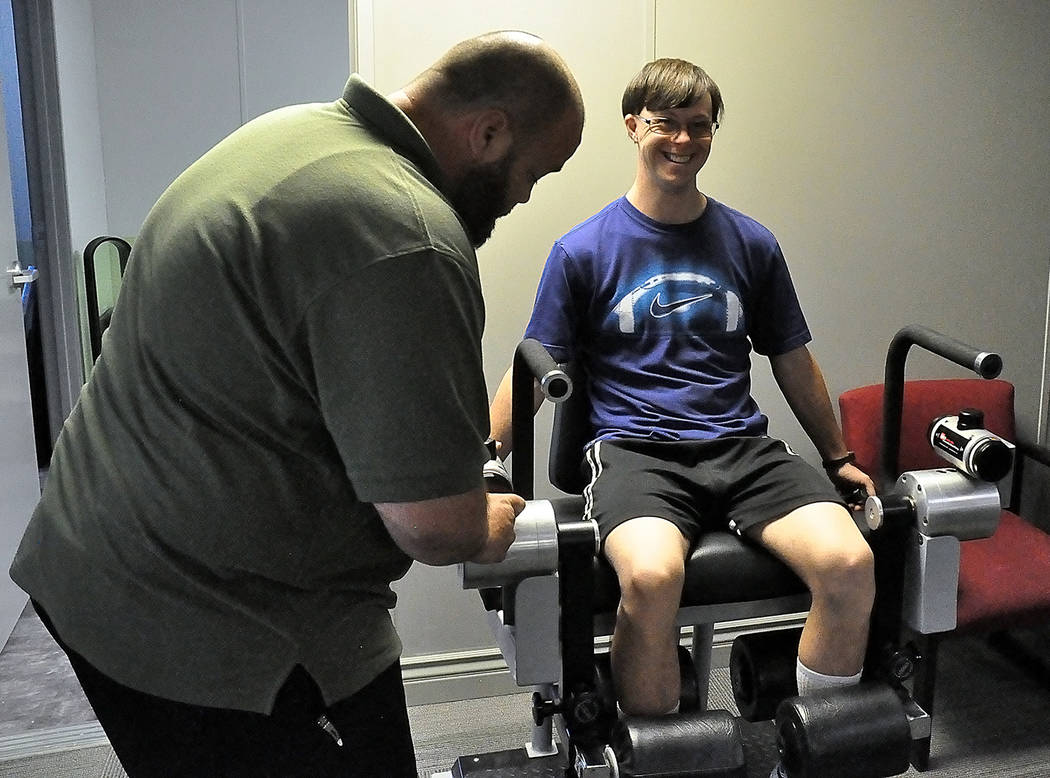 Horace Langford Jr./Pahrump Valley Times Billy Klem, shown working with Chandy Christensen of Advanced Spine and Posture in Pahrump, will compete in the running long jump, 100 meters and 200 meters in the 2018 Special Olympics USA Games next week in Seattle. 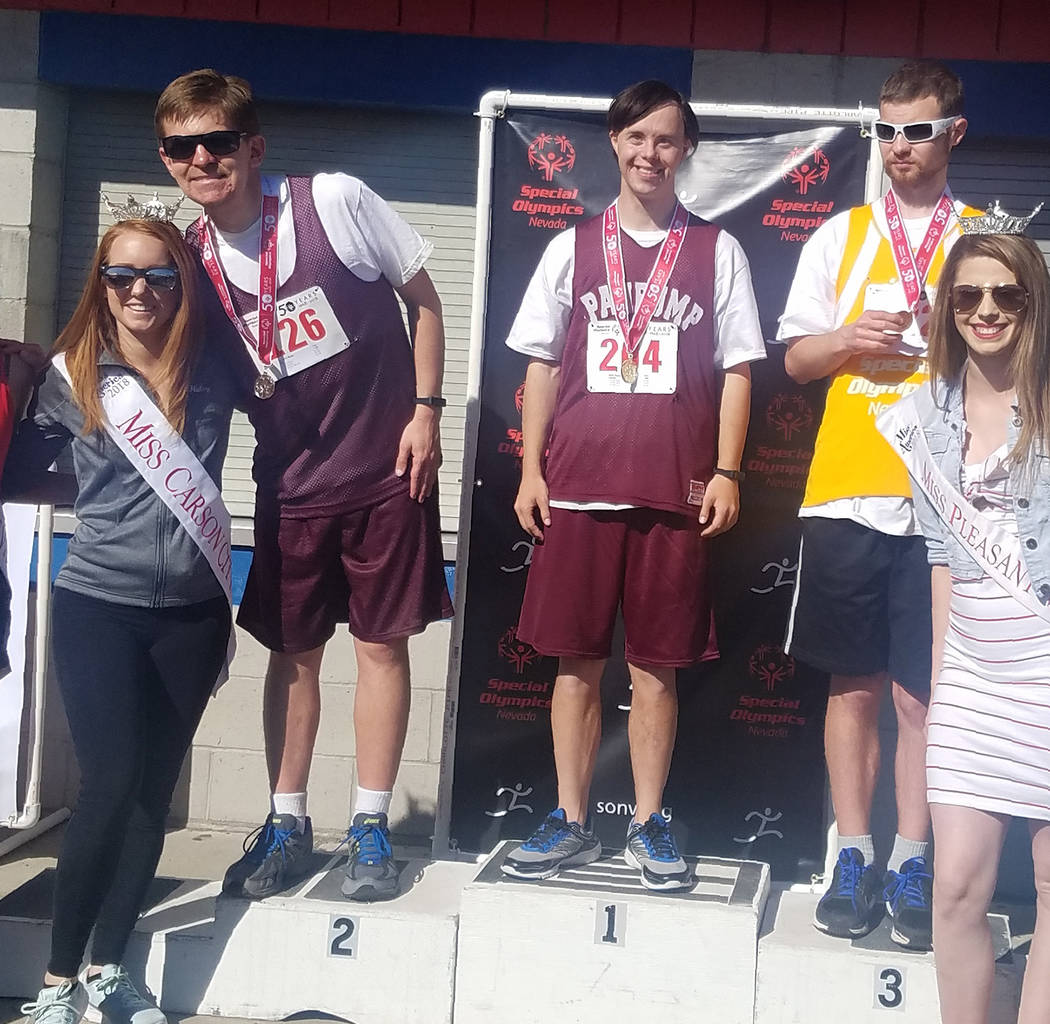 Teresa Klem/Special to the Pahrump Valley Times Billy Klem of Pahrump on the medal stand after winning a gold medal in the running long jump at the Special Olympics Nevada Summer Games in early June at the University of Nevada in Reno.

Four thousand athletes representing all 50 states and the District of Columbia, 10,000 volunteers and thousands of spectators will gather at Husky Stadium on the campus of the University of Washington in Seattle for the opening ceremonies of the 2018 Special Olympics USA Games.

Taye Diggs will be the master of ceremonies. Ann Wilson of Heart will be among the entertainers. Co-grand marshals will be Seattle Seahawks linebacker Shaquem Griffin and Tim Corrigan, 75, who lit the torch and competed at the first Special Olympics in 1968 in Chicago. ABC will be there to televise the event live starting at 12:30 PDT.

And Billy Klem of Pahrump will be there, too.

Klem, 28, will be one of three male and three female athletes representing Nevada in track and field at the nationals.

“I was shocked,” Klem said of his selection. “For believing in me, I just have to say thank you.”

“When he has competed in the past year, he has had very fast times and longer jumps,” said Teresa Klem, Billy’s mother. “They had kind of like a draft, and he was one of the ones they picked.”

After being recommended, Billy Klem had to go on a weekend stay with other athletes in a hotel in Las Vegas to see how he would do being away from home. The result is his first trip to Seattle.

Klem got a taste of a bigger stage earlier this month at the Special Olympics Nevada Summer Games in Reno.

His best was good enough to wind up on the medal stand.

“Those are the events he’s always done,” Teresa Klem said. “He’s also going to do a relay for the USA Games. He’s never done a relay before, but they thought they would put a team together.”

Nevada is sending teams in basketball, bowling and swimming, as well as track and field for the competition that will run through July 6. The Special Olympics USA Games, which are held every four years, also includes bocce, flag football, golf, gymnastics, powerlifting, soccer, softball, stand-up paddleboard, tennis and volleyball.

Billy Klem plays several other sports, and his basketball skills were once on display during halftime of an NBA Summer League game in Las Vegas. But his favorite thing to do is CrossFit.

Klem, who has been playing sports since starting soccer as a 7-year-old in Bricktown near the Jersey Shore and has been involved in Special Olympics since he was 12, is that rare athlete who enjoys training and working out as much as he enjoys competition.

“He works out four to five days a week at CrossFit Land Mine,” Teresa Klem said. “He’s been doing that going on two years now. He also works out on isokinetic equipment at Advanced Spine and Posture. He does that twice a week. Then I take him over to the high school and he runs at night.”

That’s in addition to any practices his Special Olympics teams might be doing during any given season.

“Billy pushes himself pretty hard,” Christensen said. “Working with him has been a lot of fun. We work with him on techniques, and we keep reminding him about his form. But he doesn’t really struggle with anything. If he can do it, he does it well.

“One of the reasons we started doing this was to help work with his endurance. It has picked up immensely, and he gets better and better each time.”

While working out on the equipment at Advanced Spine and Posture will help prepare him for a variety of sports, Billy Klem also gets some help on the track from his sister, Kaitlin.

“She’s been coming out and working with him over at the high school because she has a lot more experience at that than I do,” Teresa Klem said. “She went to state all four years in high school in those events.”

Teresa, Kaitlin, Hilario and Chandy all will be making the trip to Seattle to support Billy, who lists being picked for the event as his best sports memory.

ABC will televise the opening ceremonies live beginning at 12:30 p.m. Sunday, and a daily highlight show will be featured on the ESPN networks.