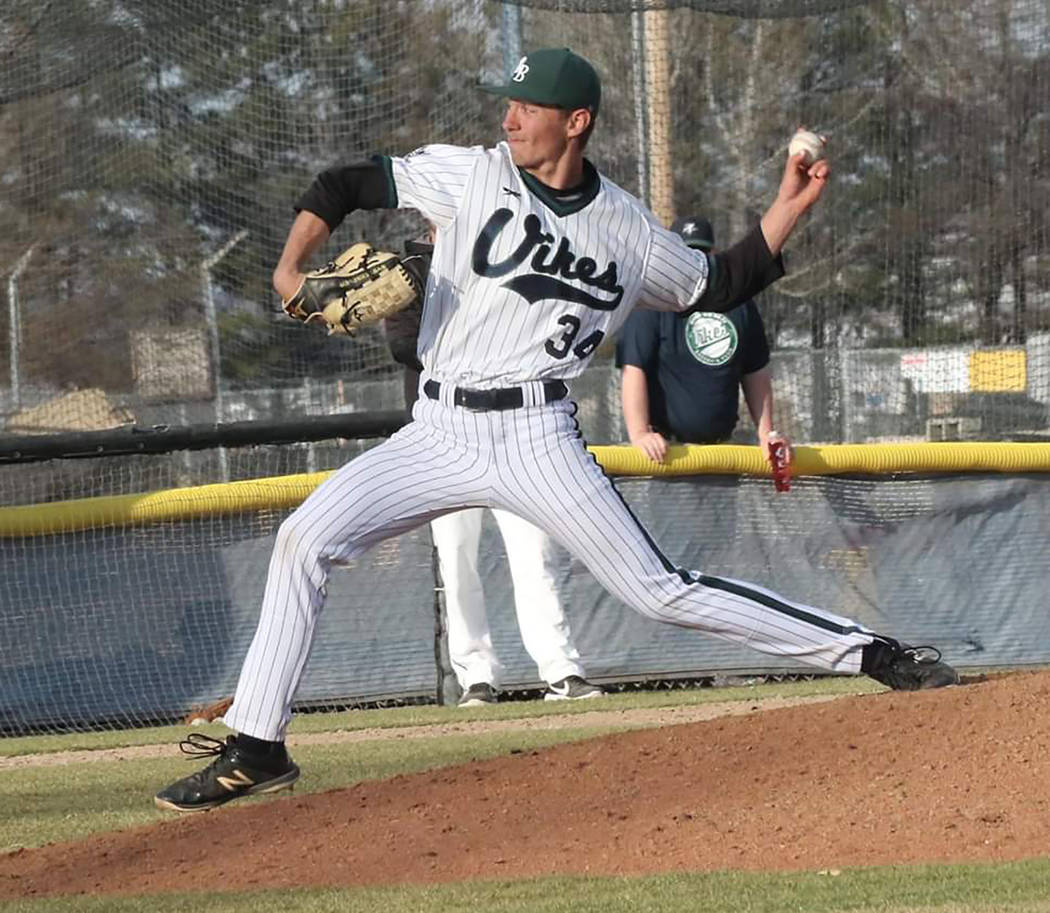 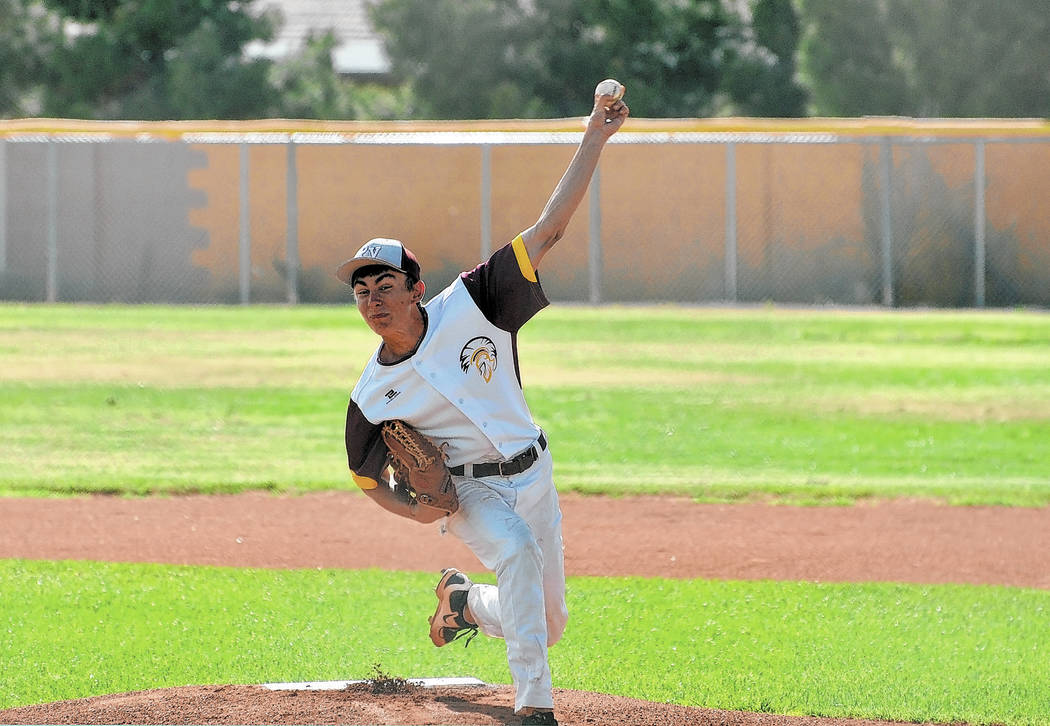 This is the fourth in a series of stories catching up with Pahrump Valley High School graduates who are continuing their athletic careers in college.

Garrett Lucas’ college career got off to an awful start, but, partly as a result, he’s now looking at an entirely new beginning.

Lucas was badly hurt before he ever threw a pitch for Big Bend Community College, the Moses Lake, Washington, school at which he had signed to play coming out of Pahrump Valley High School.

“I took a ball to the forehead and I fractured my skull from the top of my forehead all the way down to where my eyebrow is, and my sinus,” he explained. “That was all fractured. With that, I didn’t get to play fall ball. It was just light toss, that was the only thing I could end up doing.

“At the time it didn’t feel much different than being punched in the head or something like that. After that initial shock, I kind of knew it was bad.”

And that doesn’t even begin to address the mental aspect of taking a ball to the forehead, but Lucas pressed on. The problem was that, not being able to fully participate in fall ball, he was behind his teammates when the spring came around.

“We immediately got thrown into live pitching against batters, and me not really having thrown very much, that was tough being thrown right into the fire,” he explained. “When spring came around I only had that two-month period, and it was just a shock to me.”

Not helping matters was Lucas’ performance pattern. He acknowledges that he is generally a slow starter, and the way he was used — and the infrequency with which he was used — didn’t allow him to show what he can do.

“I think I had seven appearances,” said Lucas, who indeed pitched in seven games, for a total of seven innings. “I don’t think they really got to know me as a player, because anybody that has watched me throw knows that I come in for the first inning and start out slow. I’ll walk a guy, not start out at my best, but then I’ll lock in about the second or third inning and do well for the rest of the game. And they never gave me the chance to prove that.”

It was quite a jolt after being the staff ace during his senior year in Pahrump. Lucas pitched 73 of 237 innings for the 2018 Trojans, starting 11 games and fashioning a 7-3 record with four complete games and a five-inning perfect game. Not known as a strikeout pitcher, he nevertheless struck out 80 in those 73 innings and finished with a 2.49 earned-run average as the Trojans reached the Class 3A state tournament.

His performance was good enough to be named to the Class 3A all-state first team and was selected as honorable mention all-state by Nevada Preps.

With those memories in the not-so-distant past, naturally, Lucas had a lot to think about as he pitched those seven innings as a freshman for the Vikings.

“I guess I kind of tricked myself into thinking that it isn’t going to always be like this,” he said. “I’m not a guy who’s going to quit. I decided to finish out the season, and it was hard deciding whether to risk coming back and maybe having another year like this or getting a fresh start somewhere.

“It put a lot of stress on me. I finally decided to go somewhere else, because my family wasn’t happy with the school, and if family’s not happy, I’m not happy. That kind of helped in my decision.”

Lucas’ best effort for Big Bend came too little, too late during the thought process. He pitched in the Vikings’ postseason tournament game against Edmonds Community College, a team that went 34-13. Although he wasn’t dominant, he threw well in his two innings of work and recorded a couple of strikeouts.

“They had me pitch two innings, but by that time I had a system down where I’d throw a whole bunch in the bullpen so I would be locked in when I came in,” Lucas said. “The coach was very impressed, but by that point I had already made my decision.”

At least, he made the decision not to return to Big Bend. As far as what was to come next, Lucas had a couple of options.

One was Benedictine, which recently landed former Trojan standout Parker Hart as a transfer student. Another was Arizona Western, where brother Willie, who originally had committed to Big Bend, decided to enroll after Garrett’s negative experience in Washington. But Garrett wasn’t as enthusiastic about playing in Yuma, Arizona, as his brother, or so it appeared for a while.

“Benedictine University, which Parker is going to, they contacted me but I’m not sure about going there because they have like a 50-player roster with 20 pitchers on it,” Lucas said. “It’s not up there on the list, either.”

Going to a four-year school would offer Lucas some security, as going to another community college would mean he essentially will have one season to prove himself to other schools. But Lucas has his confidence back.

“I feel like I’ve got myself locked down at this point,” Lucas said. “I had that whole last year just to find myself, and it was a building year for me. I’m not going to say I regret doing it. Everything improved, I can hit spots better, so I know the next school that I’m going to I’ll be able to prove myself right away.”

And he certainly looked at other options.

“I just sent out emails to Mesa (Community College) and Central Arizona (College), so I’m waiting for their responses,” he said in late June. “I’ll probably give them a call.”

But it when came down to it, the chance to play for a highly regarded baseball program and play with his brother won out, and Lucas last week decided to join Willie at Arizona Western.

And baseball will help him achieve his goals.

“My goal right now is a chemistry degree. The goal after that is dental school,” he said. “My first quarter I was going for mechanical engineering, but I ended up thinking this isn’t really for me. I don’t enjoy this. I got out of there and started working toward chemistry, and I really enjoyed that.”