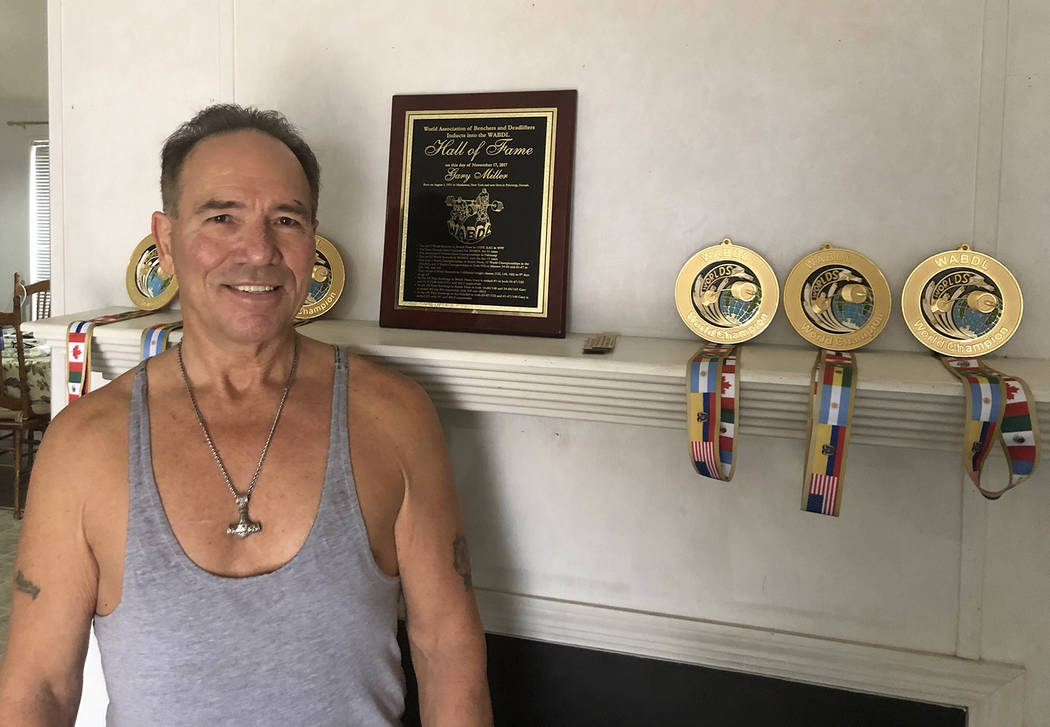 Tom Rysinski/Pahrump Valley Times Gary Miller with medals for his three most recent titles and the plaque he received upon his 2017 induction into the World Association of Benchers and Deadlifters Hall of Fame. 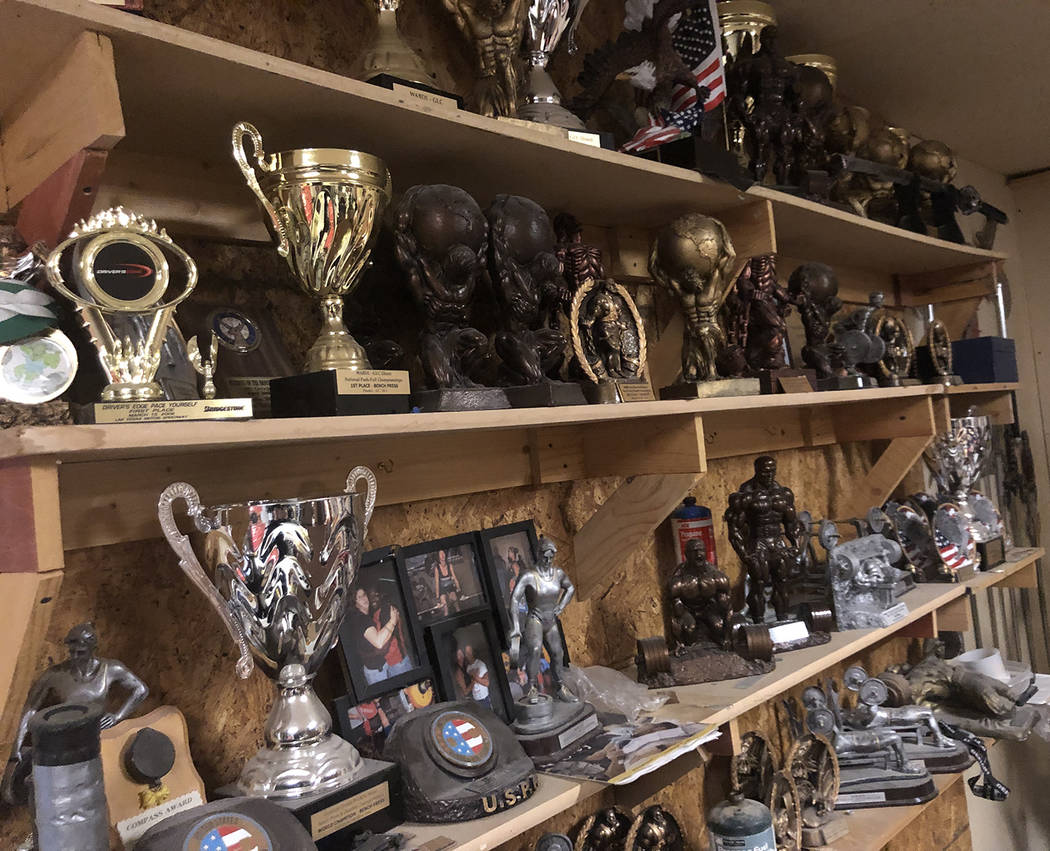 Tom Rysinski/Pahrump Valley Times Some of the dozens of trophies and awards Gary Miller has won over the past 15 years fill shelves at his Our Road home in early December. 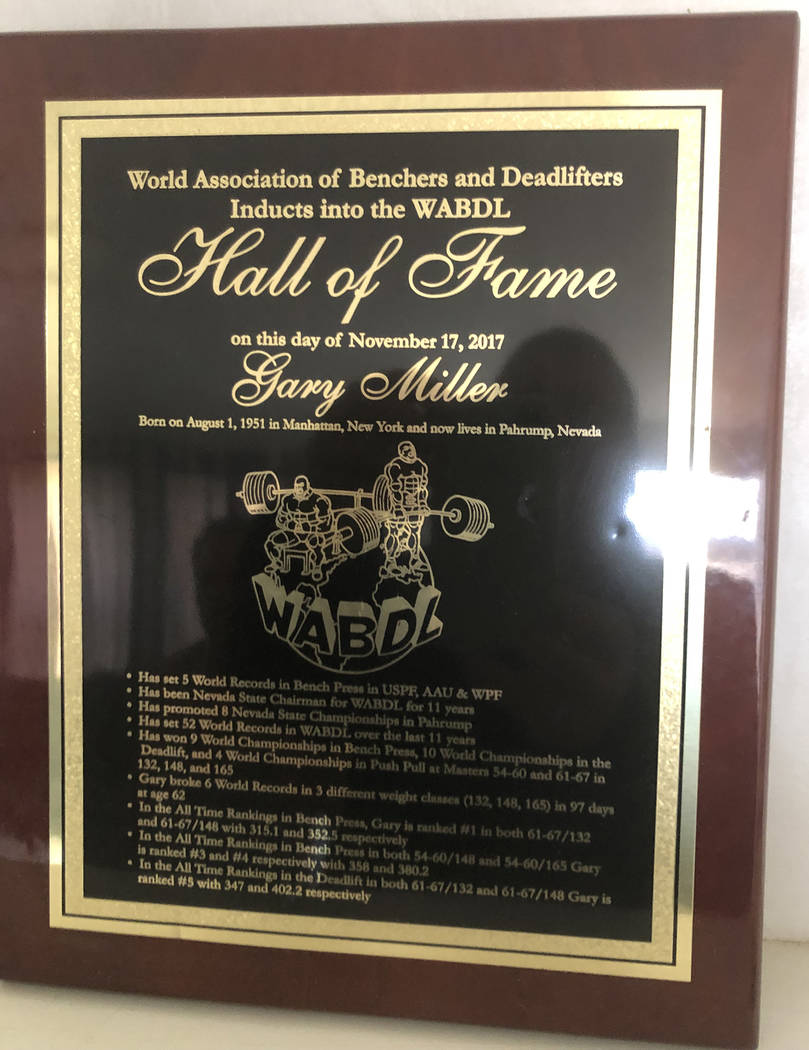 Tom Rysinski/Pahrump Valley Times On Nov. 17, 2017, Pahrump resident Gary Miller was inducted into the World Association of Benchers and Deadlifters Hall of Fame. 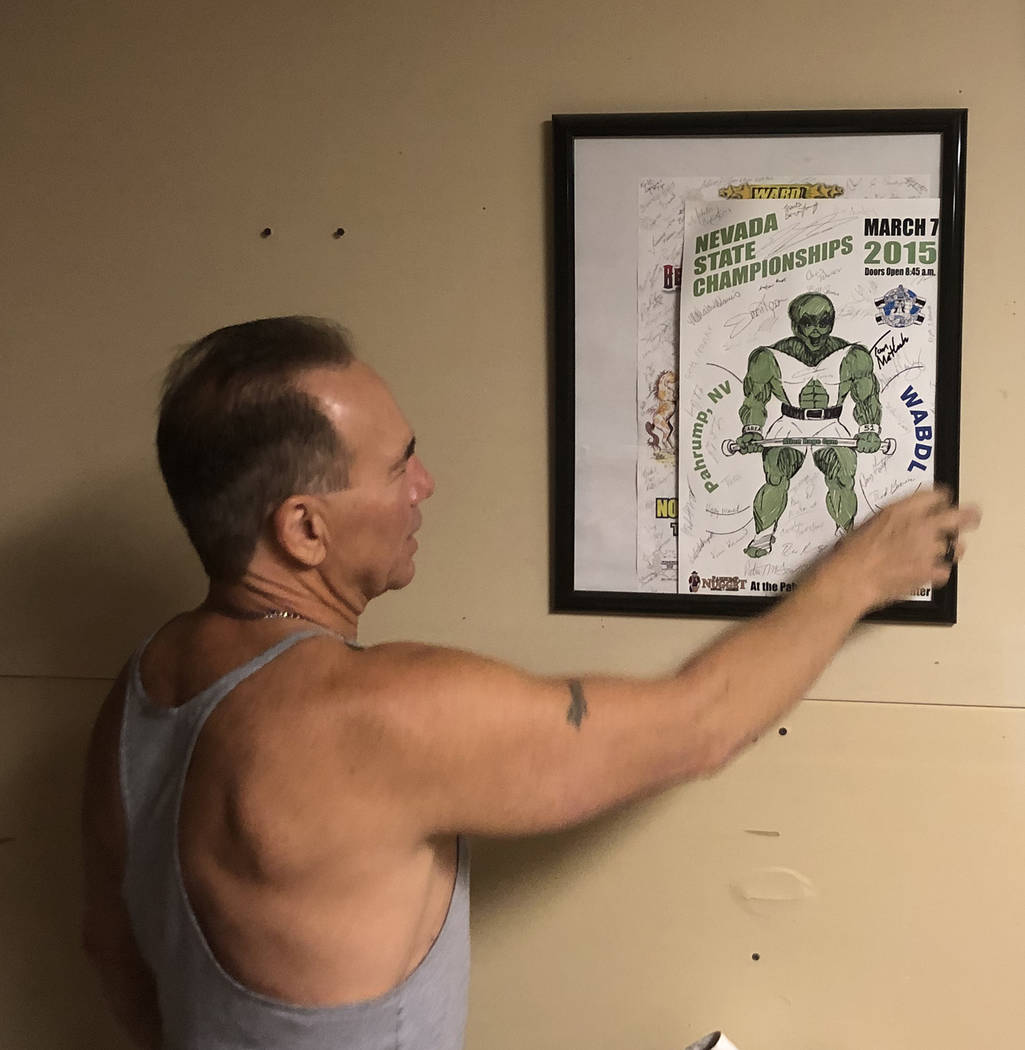 Tom Rysinski/Pahrump Valley Times Gary Miller shows off a sketch of an alien-themed trophy designed by his ex-wife that has been awarded to winners at World Association of Benchers and Deadlifters-affiliated competitions in Nevada. Miller is the state chairman of the WABDL.

The living room in the house on Our Road was mostly empty, and other areas were barely furnished. Clearly, somebody was in the process of vacating the premises, and some of the work had been done.

But then Gary Miller walks toward the rear of the home, and you reach a room overflowing with trophies, awards and other reminders of 15 years of powerlifting, a time that includes setting world records 67 times and his 2017 induction into the World Association of Benchers and Deadlifters Hall of Fame.

“I’ve got to get all of this stuff out of here by Friday,” Miller said on a Tuesday in early December. “These boxes are all trophies, there’s swords and stuff over there. I’ve got 200 trophies up there in the attic. Now those are the trophies I give out when I do a competition.”

As state chairman of the WABDL, he has organized championships, and the trophies were his own personal stamp on Nevada competitions.

“They are specially ordered,” Miller said of the trophies. “Every meet has a theme. I decided when I became the state chairman, which was 2009, that when I put on a competition it was going to be aliens because we have the Extra-Terrestrial Highway, we have Area 51, in the movie “Independence Day” they drove through Pahrump, and the movie “Mars Attack” was filmed here.

“For six years, I tried to contract a trophy company that would make an alien trophy. … I ordered 512 of those trophies, and in three years I gave out almost 300 of them, so there are about 200 up there.”

But all of them had to be moved, as Miller’s time in Pahrump was coming to an end after 25 years. Not that he expected to wind up in Pahrump in the first place.

“I moved from New York to Phoenix for one year, then I was moving to Escondido, California,” Miller recalled. “I’m a certified firefighter, and I was offered a job there. We stopped to visit friends in Tonopah, and I started checking and I found out that he offered me a $41,000-a-year job, and Escondido is like a suburb of Santa Barbara, and you can’t afford to live there on $40,000 a year, not with a wife and two kids. So I said that’s not going to work for us.

“I took a job in Tonopah and we were there for 13 months, and I left there and went to Vegas, and I was there for about five years. I was working surveillance for the big casinos, and I took on a job at the Saddle West as a surveillance director. So I was commuting from Vegas to here, and we moved here so I wouldn’t have that commute. And I’ve been here since 1995.”

About a decade later, after his daughter noticed his gut hanging over his belt, he resolved to get in shape, and he did so in a big way. In addition to breaking world records 67 times himself, he has trained and trained with others — several older than he is — and helped them break records.

There is his workout partner of 13 years, Bill Prince, 82, who has broken more than 20 world records and entered the WABDL Hall of Fame a year after Miller did. Then there is Jean Santivasci, in her 70s, who set world records last year, earlier this year in Phoenix and again in November, Miller said.

“We’ve probably taken somewhere in the neighborhood of 30-plus people that have never, ever lifted before to setting records,” Miller said proudly. “I think we have seven record-holders here in Pahrump.”

For nine years, Miller held the state powerlifting championships at the Pahrump Nugget, taking it to Las Vegas last year. But his powerlifting travels took him far beyond Nevada.

Most recently, Miller competed in the WABDL World Powerlifting Championship from Nov. 12-17 at Bally’s in Las Vegas. The event drew almost 600 lifters representing 34 countries. And while Miller set three world records — and three state records — he “didn’t reach the goals I set for myself,” he said.

It started with not making weight, as the stress of trying to sell his house and find a new place helped add some pounds to his 5-foot-3 frame.

“When it came to weighing in the day before I lifted, I was 10.3 pounds overweight,” Miller said. “You can lift, but you can’t place. I was entered into 132 so, I could go into 148, but I couldn’t place. I had to lose 10.3 pounds in order to make weight, so I stayed in the steam room for five hours and lost 10.6 pounds, but I was so weak the next morning when I went to lift that I just made my opening lift.

Setting records even when not reaching his goals is nothing for a man who literally came back from the dead. Long before he responded to his daughter’s joke about his belly by getting in shape, he had to respond to a horrific accident just to walk.

“They resuscitated me. I wasn’t supposed to live more than 24 hours, and I was in a coma for 19 weeks. My ankle was broken in eight places, the bone came out of my thigh in three places, ripped my stomach lining open, crushed one of my kidneys, pushed the other kidney against my pelvis, crushed bone in my back, broke this arm, this hand spun completely around, had five knee surgeries, three abdominal surgeries and reconstruction of this wrist and spent two years in a hospital.

Miller, who lost 3 inches off of his left leg and one of kidneys in the crash, notes that if he was in a car at the time, he likely would be dead.

“If I had been in a car, I would have been strapped in a seat belt and I definitely would not be here,” he said. “I simply would have been crushed. Our god truly must have some other reason to keep me alive. Hopefully, it’s because I have the ability to teach others.”

A certified personal trainer, a nutritionist and a lifestyle health coach, Miller’s client list has shrunk of late. Retired after owning a business for 25 years, the number of clients is not enough to supplement his Social Security and maintain a home in Pahrump.

“There’s just not enough people here to support me,” Miller said. “A great many people are retired, and they just want to sit back, have a beer, watch TV and enjoy themselves, and they’ve earned that. So there is a very small percentage of people that I could entice to do this, and half of them aren’t interested. At one point I had 11 clients, and I was doing very well. Now I’m down to two.

“I’m going to Vegas because Vegas has 2.3 million people and has a lot of young people that can appreciate and want to be in the shape I’m in at my age. I relate to people with disabilities because of my injuries, I can relate to people who are overweight, because I was overweight. My goal is not simply to be a trainer but to be a motivational speaker. I’m going to go to Vegas, and I’m going to find a place I can open as a training center.”

So the record-setting powerlifter, trainer — and ballroom dancing champion — is packing up his equipment, his trophies and everything else and heading over the pass. But his 25 years in Pahrump are going with him.

“I’m pretty proud of the fact that even though we’re such a small town we have two people inducted in the powerlifting hall of fame,” he said. And Miller counts former Nye County District Attorney Bob Beckett and two deputies from the Nye County Sheriff’s Office among those he has helped train.

“I’m not retiring by any means,” he insisted. “I’m hoping to put on the Nevada state championship sometime in March, and it will be in Vegas.”

If some of those 2.3 million people do sign up to be trained by Miller, they will get not only tips on nutrition and lifting but some philosophy as well. After all, no motivational speaker lacks some tidbits of wisdom to offer, and Miller has two personal favorites.

“When you have someone in your life who wants you to succeed as much as you want to succeed, success is inevitable,” he said. And, “Individually, we can do great things. Collectively, we can do the impossible.”