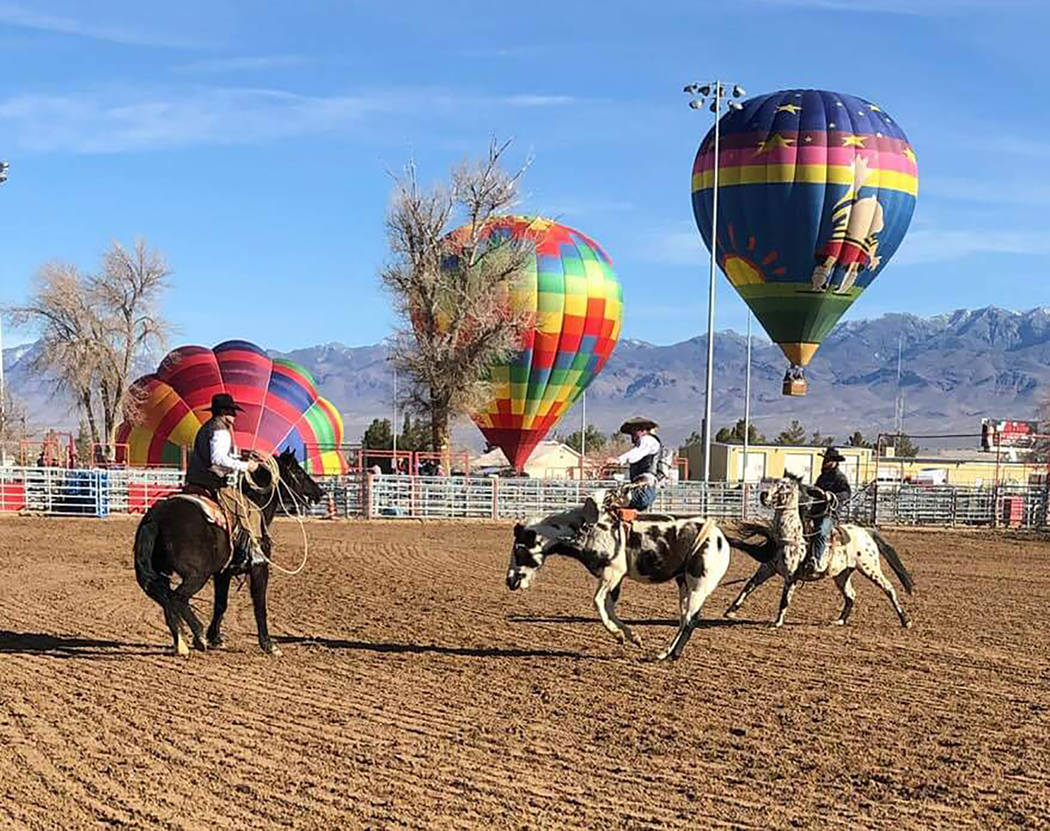 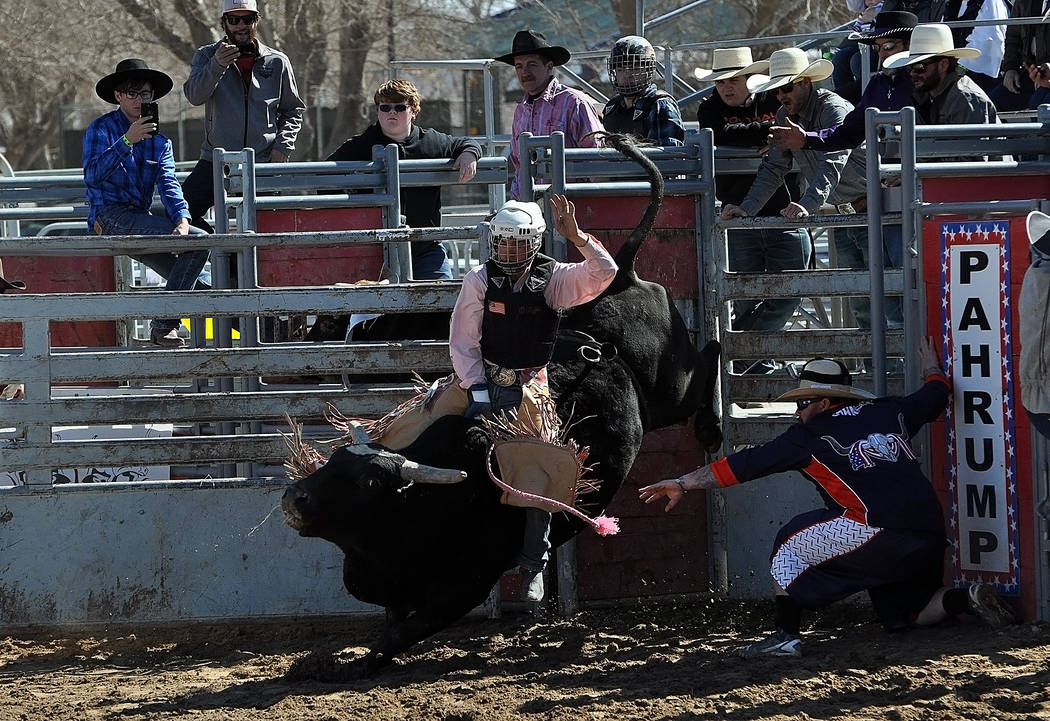 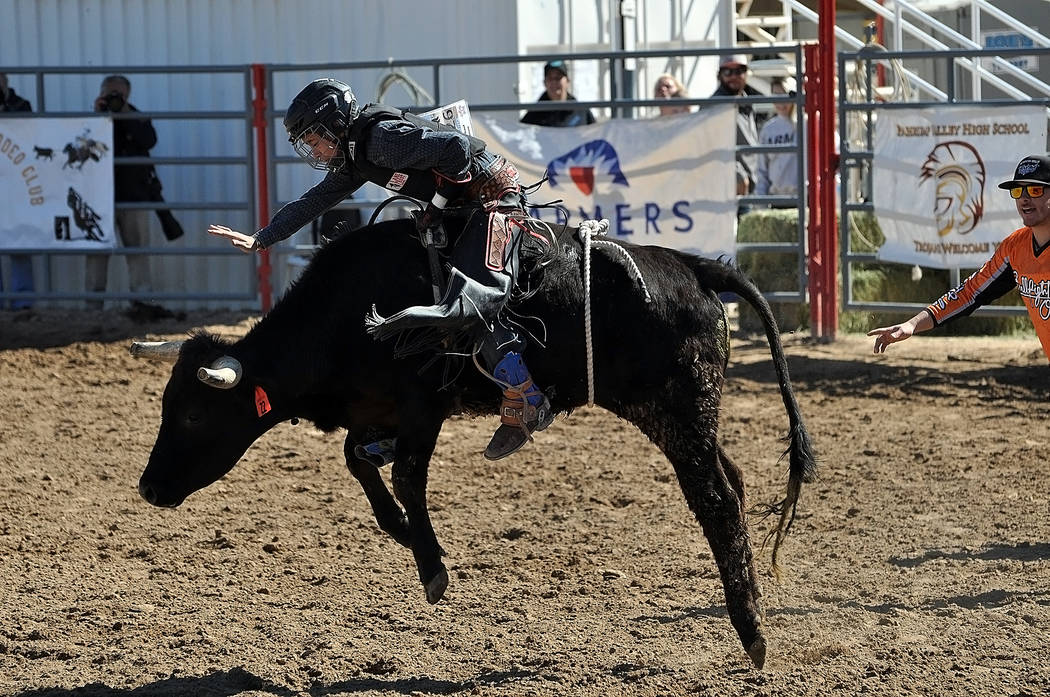 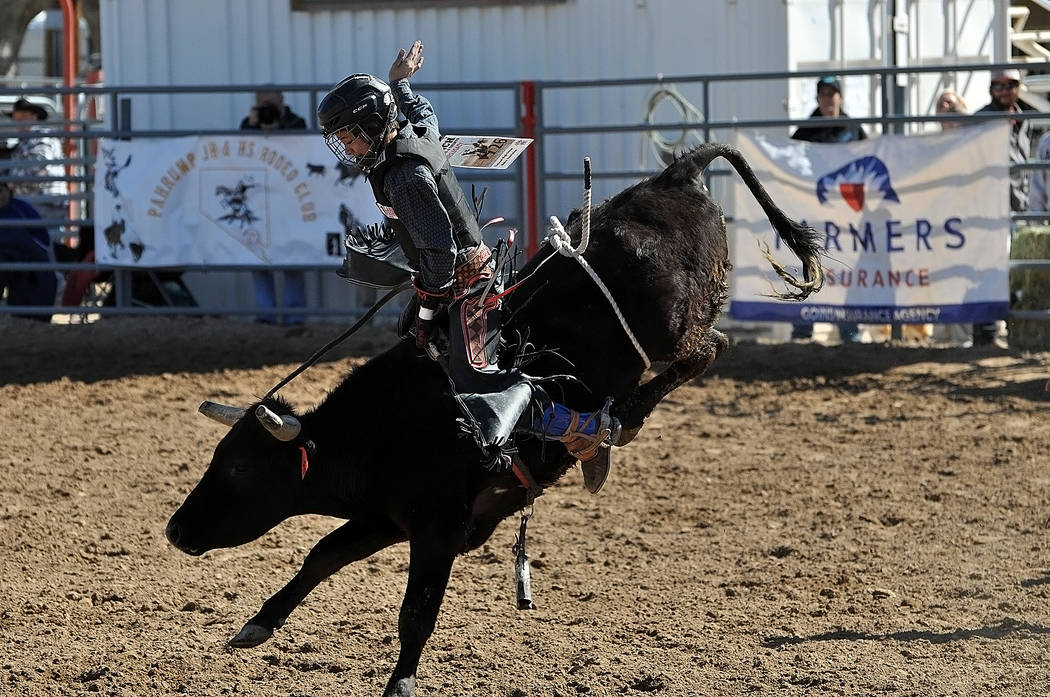 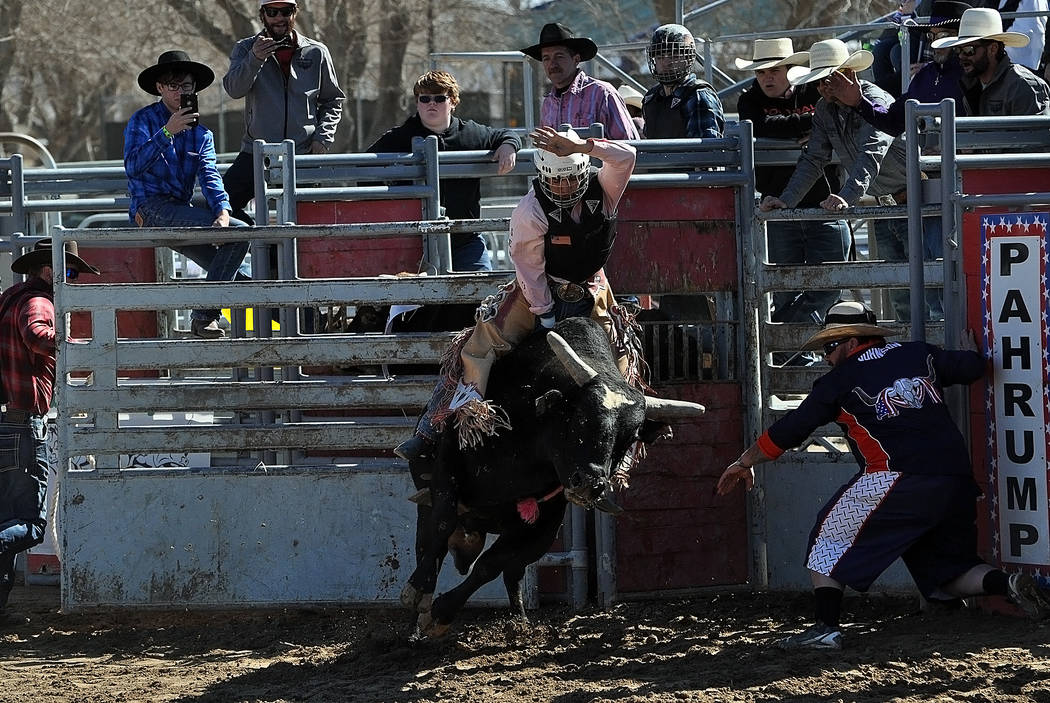 And with the chance to perform in front of their home crowd Saturday and Sunday at McCullough Arena, Hardy and Mountz maintained their hold on first place in the Nevada State High School Rodeo Association’s season standings.

Hardy, the only high school bull rider to score points this season, added to his run with a strong Saturday effort while Mountz extended his lead among junior high school riders by scoring on both days.

“I didn’t too well today,” Hardy said after his ride Sunday. “But the first day I scored 74 so I’m taking home a buckle this weekend.”

Of course, Hardy has won plenty of those this year.

“I’ve won four rodeos so far, four bulls ahead of everyone else,” he said.

Mountz was satisfied with his Sunday ride. He actually scored higher Sunday than Saturday, but he was the only rider to score Saturday and thus added 10 points to his lead over Washoe County’s Brenden Webb, whose score Sunday was four points higher. Overall, Mountz leads Webb by 40 points.

Mountz said he had never ridden his Sunday bull before.

“It was pretty good,” he said of his ride. “It’s hard to counteract their moves. It’s in a fast motion, so when he makes a turn you’ve got to make a turn with him.”

Hardy agreed that staying on the bull is all about the rider, not what the bull is doing.

“It’s not really the bull’s fault if you get thrown off,” he said. “It’s about what you do. It’s your counter moves. If you’re not where you need to be, you’re going to get thrown off.

“This weekend I knew every one of the bulls that were going to be out here. Dustin and Rebecca Tibbits from D&R Bucking Bulls brought some sweet bulls down here. I got on Redemption, one of their bulls, the first day and then Smokin’ today.

“That bull I got on today was going so fast I never really saw most of it. He was going in a whirl.”

There is much more than bull riding at a rodeo, of course, and Pahrump Valley’s club had three other entrants competing. Sophomore Raelean Sutton, who qualified for the Silver State International Rodeo last year, finished fifth in trap shooting and fifth in rifle, and she “almost caught in breakaway” roping, said Pahrump Valley’s rodeo director, Buddy Krebs.

Senior Kyrstyn Peugh showed off her riding skills in pole bending and barrel racing, posting times of 29.0 and 24.5 seconds in barrels and 20.3 on Sunday in poles. Newcomer Jakob Feiner, a sophomore, didn’t catch in team roping with Hardy, but Krebs is enthusiastic about his future.

“It was still pretty good for his first rodeo,” Krebs said of Feiner.

Among junior high schoolers, Tylar Trausch won Saturday’s barrel racing with her time of 18.592 seconds, and her seventh-place Sunday finish gave her fourth overall for the weekend. Her 21 total points vaulted her into the top 15 in the state.

“You put a handle on their back and you have to put your feet on their neck,” Mountz explained. “Bulls is better. I’m a lot better at it. It’s way more fun.”

Mountz said that after limping slightly coming out of the arena after Sunday’s ride.

“I think he stepped on my leg,” he said.

Hardy has had his share of injuries as well, citing a broken arm and a broken collar bone in his past and noting he just was cleared to ride after tearing a muscle in his knee a couple of weeks ago. He said he went to Gary Leffew’s bull riding schools, but in the end he said the concept is simple.

“It’s pretty straightforward,” Hardy said without a trace of irony. “Keep one hand on it, one hand up and stay on.”

Again, Hardy is the only high school rider in the state to score points this season in bull riding, and he was happy to have the “home-field advantage” at McCullough Arena.

“Having all my buddies back here makes it all worth it,” he said. “Our hometown, family can come out.” This year’s other high school rodeo events have been in Battle Mountain, Ely, Elko, Spanish Springs, Alamo and Boulder City. “At the end of the season we’re going to go for state champion, and if that works out, on to nationals.”

Krebs was pleased with how the Pahrump rodeo went and noted it was larger than last year’s, which was the first high school rodeo in Pahrump since the program was revived. “Every year is going to keep getting better,” he said.

Krebs said that wouldn’t happen without a lot of help, and he expressed his appreciation to the Pahrump Chamber of Commerce, the Nye County Commission, Pahrump Tourism, the town of Pahrump, Pahrump Fire and all of the sponsors and volunteers who helped make the rodeo a success. “There’s too many of them to name,” Krebs said.

Then there is the small matter of animals, and Krebs thanked D&R Bucking Bulls, Outlaw Broncs and Griffith Livestock for their assistance.

Overall, Krebs said the rodeo was a huge success, and with 15 kids in the Pahrump program, it bodes well for the future.

“The other kids aren’t ready yet, but they were there helping,” he said. “But it went well. The kids had a blast, especially with the carnival and the balloon festival next door.”