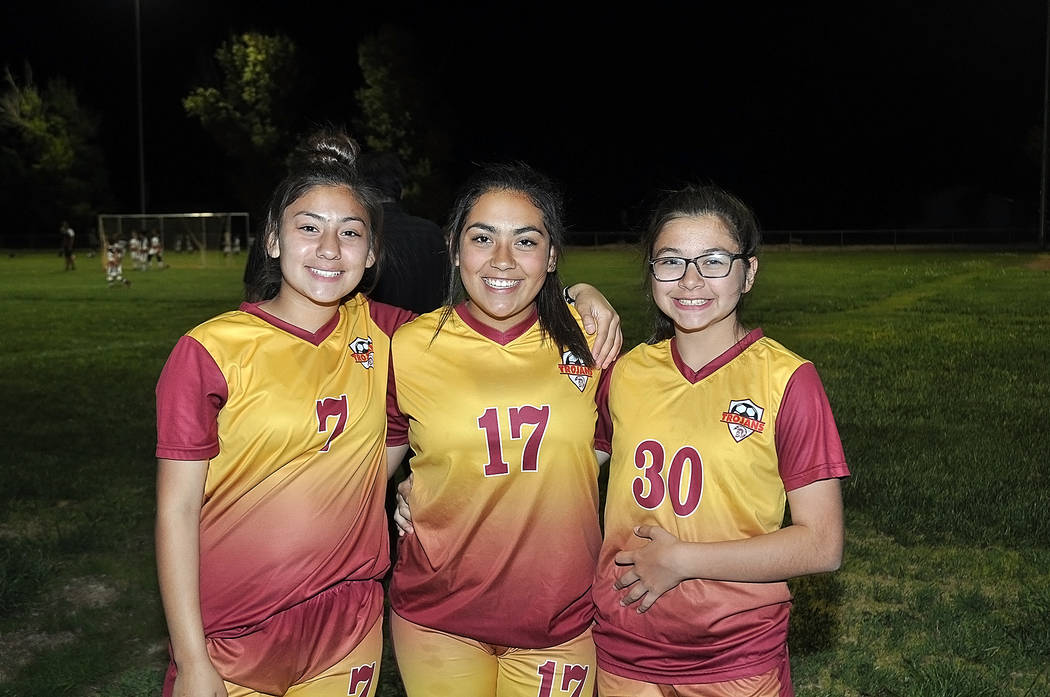 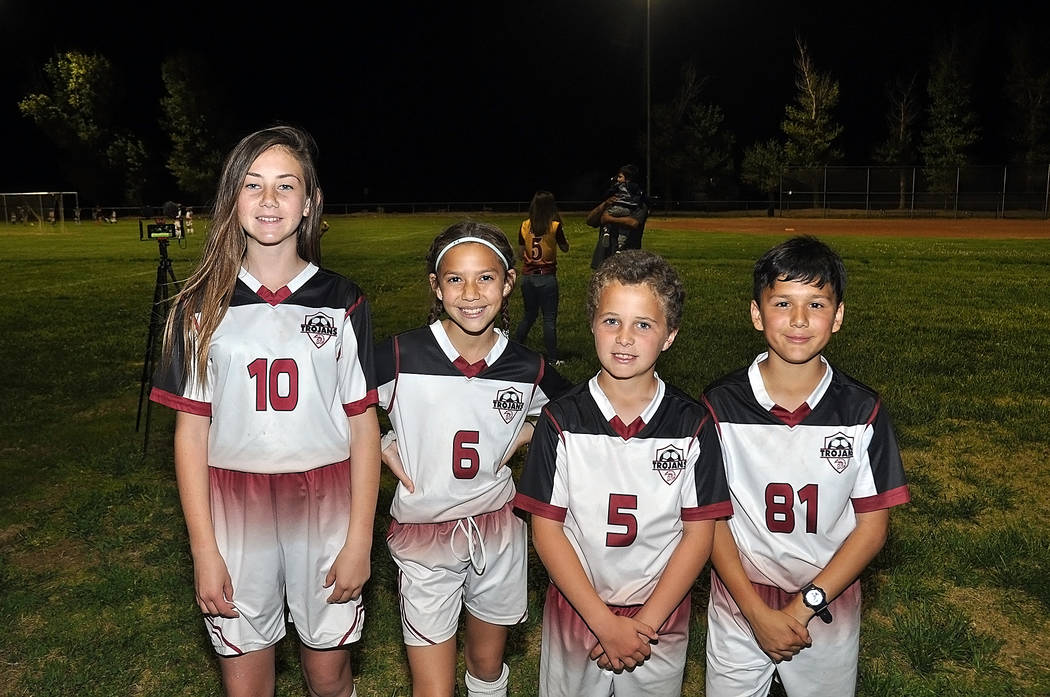 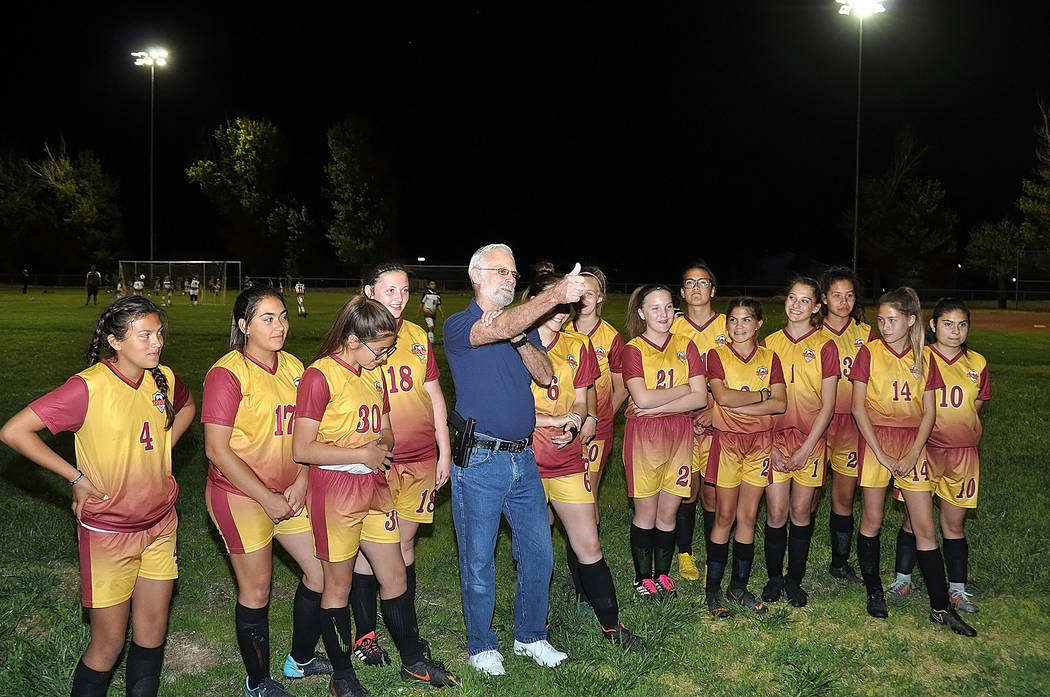 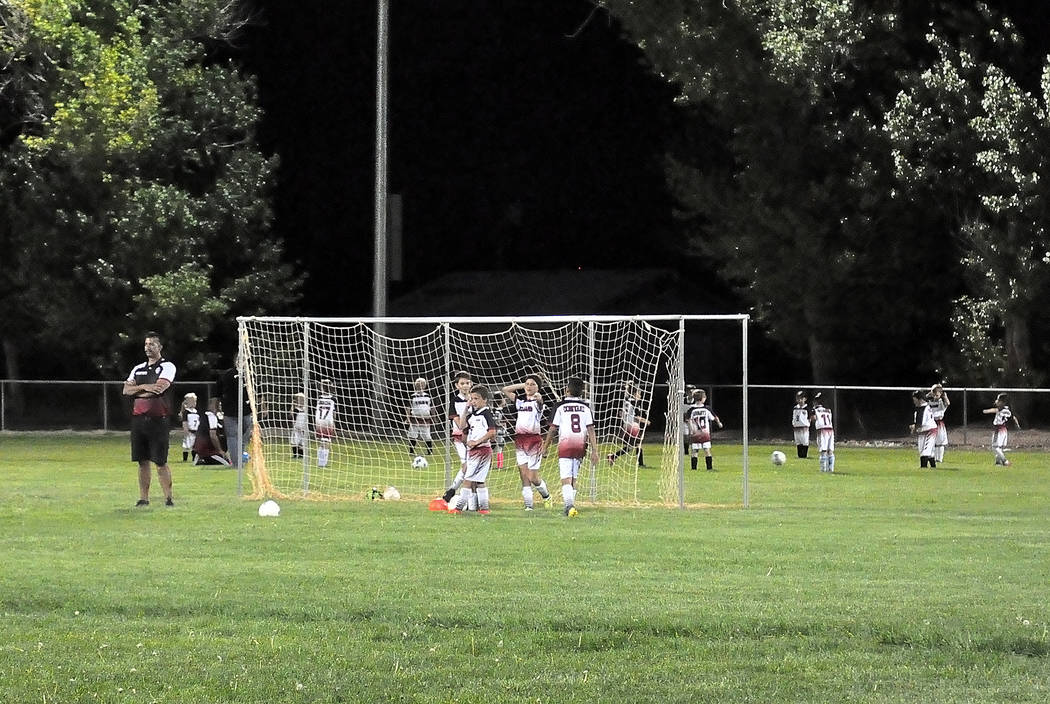 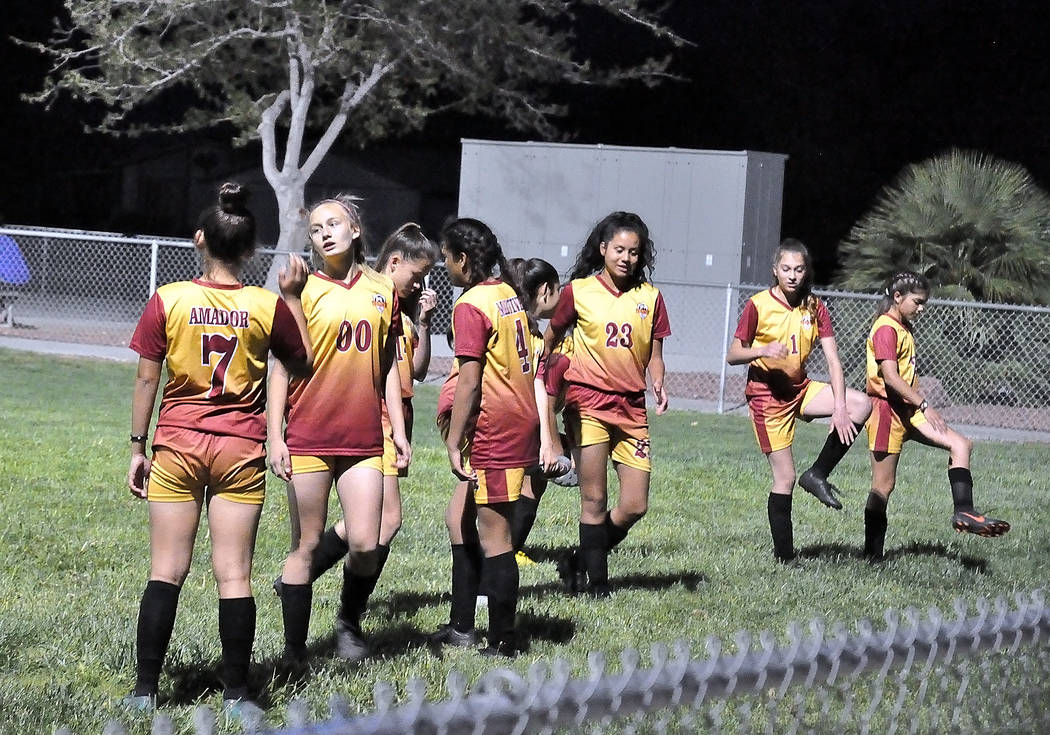 It’s not always easy to impress kids, but apparently $1 million worth of lights does the job.

“They’re pretty cool,” was the reaction of 10-year-old Benjamin DeSantiago as he looked up at the new lights at Simkins Park.

DeSantiago, who has been playing soccer since he was 3, was among a few dozen young players enjoying Pahrump’s newest lit athletic field Monday night, and it turns out that “pretty cool” might be an understatement when it comes to the lights.

“These are very expensive lights, and they last forever,” Nye County Commission Chairman John Koenig said. “They’re guaranteed for 20 some-odd years. They’re incredible. You make the money back because there’s no maintenance. You don’t have to be here every week changing bulbs.”

“They’re really cool because they’re smart technology so you can run them off your smartphone,” Park said. “They’re all LEDs, and they’re spotted on the field. The older lights just go all over the place and are not as efficient.”

But the key thing for the soccer club and other young athletes is the town now has another park that can be used after dark. And with field space at a premium, the extra time is precious.

“The club’s really grown and we just need more space,” Park said. “We want to keep the kids playing. They want to play year-round, and the ones that don’t play any other sports and are dedicated to this, this is what we need to provide for them.”

According to Nye County Commissioner John Koenig, the park’s location is also important.

“We’ve put lights at Petrack Park and Ian Deutch Park, and we finally got all of these lights here so now we have one more park the kids can play baseball, soccer, whatever they want to play at night.”

Also on hand to see the new lights was Nye County Sheriff Sharon Wehrly, who came away impressed.

“I think it’s a wonderful thing,” Wehrly said. “Pahrump has grown up, Nye County is growing up, and we have a lot of kids who really needed something to do. This expanded it so more people can do more things in more places.”

The need for more space was as obvious to the kids as it was to the adults.

“I think they’re helpful, but we just need more in our community,” said Andrea Sauceda, 13, who has been playing soccer, mostly on defense, for nine years.

“Definitely helpful,” agreed Haven Nelson, a four-year soccer player at age 13. “But we have a lot of Trojan teams, so it’s hard to split up the fields.”

Alexis Martinez, 12, has been playing for seven years and agreed with her fellow players.

“They’re helpful, but it’s hard when you have so many kids wanting to play multiple sports,” Martinez said.

Some of the other young soccer players understand that, as several of them also play other sports. Sauceda and Martinez run track, while Nelson plays softball, as does 10-year-old Emily Mendoza.

“Getting to learn new things you didn’t know how to do” is her favorite part of soccer, while 11-year-old Kylie Crotty cites “interacting and challenging ourselves.”

Crotty said she also plays basketball, while Mendoza plays basketball and softball, but both have been playing soccer since age 4 as has Kohlzin Park, 10, who said soccer is his primary sport.

“I don’t know if racing technically counts as a sport, but I used to do wrestling,” said Park, who races at Pahrump Valley Speedway.

With so many players having years of soccer experience at a young age, the need for multiple places to play continues to grow.

“We’re in dire need of something for kids to do,” Koenig said. “The other parks are booked, they can’t get in. This is one more we can use, it’s what the people wanted and we’ve done it for them.”

“Everybody wants to play sports, and they should have the opportunity to do that no matter where they live in Nye County,” Wehrly said. “There’s a really nice park in Round Mountain, and it’s lit. We have a field up in Beatty, but it’s the school’s. And there’s a couple of lit parks in Tonopah, but they still use the school, too, as a general rule.”

“Right now we have 130 players,” Dusty Park said. “These lights being here are very helpful for us. We’ve been sharing with baseball groups and (the American Youth Soccer Organization). Football comes here I believe in August, so we’ll be over at Field C (at Petrack) and Ian Deutch.”

Everyone agreed that another park having athletic fields with lights is a big win, even before a goal is scored in a game or practice.

“It’s a good investment, and they work really great,” Koenig said. “These are fantastic lights.”