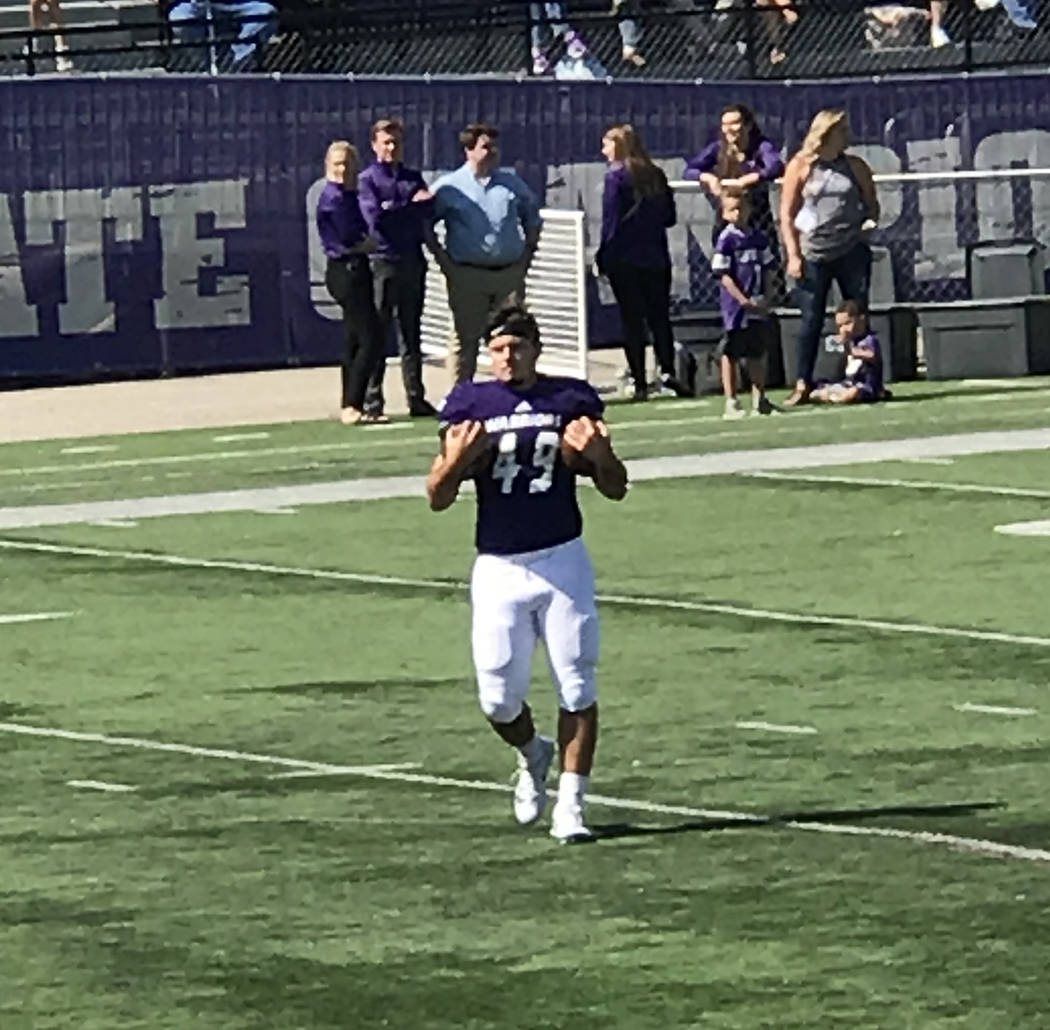 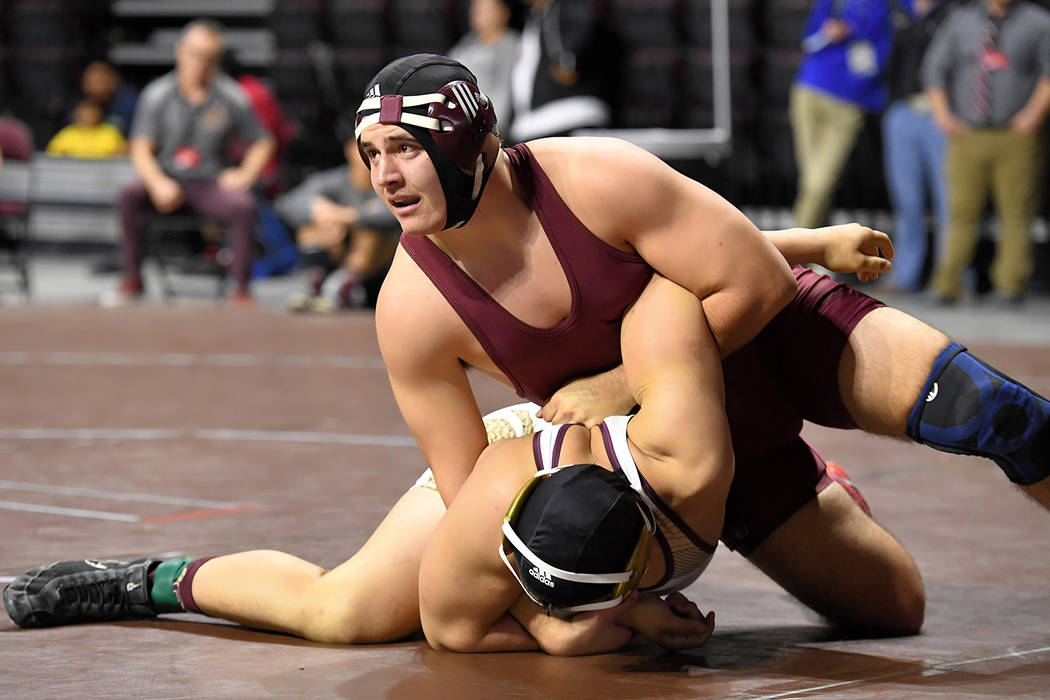 Peter Davis/Special to the Pahrump Valley Times Morgan White, top, was a Class 3A state champion wrestler as a senior at Pahrump Valley High School, winning the 220-pound title at Orleans Arena in Las Vegas.

Editor’s note: This is the sixth in a series catching up with Pahrump Valley High School graduates who are continuing their athletic careers in college.

The last time Morgan White wore maroon and gold was at the 2018 Class 3A State Championship track and field meet, where he finished second in the shot put and third in the discus.

But he is best remembered for a day earlier that school year, when thousands of people at the Orleans Arena in Las Vegas watched him win the Class 3A championship on the wrestling mat, recording a second-period pin of Julius Rice-Misa of Sparks to win the 220-pound title.

It was hard not to notice two 200-plus pound wrestlers battling for a championship, but these days what White wants more than anything else is not to be noticed. For White is a long-snapper for the Winona State University football team in Winona, Minnesota, and the only time long-snappers get noticed is when they send the ball over somebody’s head.

“The last week of track season I got a text from one of the coaches who said he’d like to talk to me about getting me a position on the team,” White said. “When the coach contacted me, I kind of did my research.”

What he learned was that the Warriors, who play in the Northern Sun Intercollegiate Conference in NCAA Division II, have a history of success. White redshirted last season as the Warriors went 8-3, playing all of their games against NSIC competition. The league includes nine schools in Minnesota, three in South Dakota, two in North Dakota and one each in Iowa and Nebraska.

White knew about Winona State before he put on a purple uniform, thanks to a former football and wrestling teammate in Pahrump.

“Dylan Grossell’s family is from Winona,” White explained. “During basketball season, Dylan kept trying to get me to try and go there because he’s going there this year.”

The 8,000-student school located on the Mississippi River on Minnesota’s border with Wisconsin has been around since 1858 and an NSIC member from the beginning in 1932. But its history of football success dates to the hiring of current coach Tom Sawyer in 1996. Sawyer has a career record of 174-78, 144-51 in conference games.

And Sawyer is happy to have White on his roster.

“Morgan has been a great fit in our program,” said Sawyer, who has taken his Warriors to the NCAA Tournament six times. “He works as hard as anybody we have, and his growth in football and in the classroom has been awesome.”

White says that record of success means high expectations are there every year.

“Of course. Always. Our coaches expect a lot of us, and we expect highly of ourselves,” he said. “We’re a good team with a lot of talent, so we should be set up this year. It’s all about hard work at this point. If we stay on the right path, we should be there at the end.”

Long-snapping is one of the more under-appreciated jobs in sports. Nobody gets on a quarterback for one incomplete pass, but let one snap sail over a punter’s head and things can fall apart in a hurry. And it’s not like getting the ball in a kicker’s hands is all there is to it.

“As soon as I pick my head up, I can get blasted,” White said. “It’s really being able to do what you do fluidly and being able to complete a task right after that. When I snap the ball, I can’t even think about anything.

“There’s definitely an injury risk. You can get blown off the ball with your head down and your legs are wide apart, and if somebody crashes down on you that’s a pretty easy ACL tear.”

White started long-snapping during his freshman year with the Trojans, and said that while the main movement came easily to him, the full sweep of the task took a little more time.

“It’s definitely a work in progress,” he admitted. “I’m still getting there.”

Right now, the “there” White wants to be getting is on the field during a game. He redshirted his first season, and the Warriors have an experienced long-snapper.

“The guy ahead of me is going to be a junior this year, so I knew I had my work cut out for me,” White said. “I think it was probably for the better to be able to focus on school more.”

But now that he has a year of college under his belt, White, who plans to major in business or engineering, is ready to get into the trenches.

Whenever he does take the position, his coach is confident in him.

“I expect him to be an excellent player for us the next four years,” Sawyer said.

White said he likes living in Winona, saying the city of 28,000 has a similar hometown feel as Pahrump. But there was an adjustment period, and White feels he managed it just fine.

“It’s 25 hours away, and starting out I didn’t have a lot of friends,” he remembered. “But around the football team you always have friends. Being around the guys you have to feel at home.”

And while he misses the Friday nights in Pahrump and misses his grandparents even more, he’s happy with his choice.

“I kind of like being somewhere that actually has a winter,” White said. “I’m a snowboarding guy, and I kind of like the snow. But it gets a little annoying having to walk in shin-deep snow to the gym in the morning.”

The Warriors open the 2019 season Sept. 7 at home against Wayne State College.