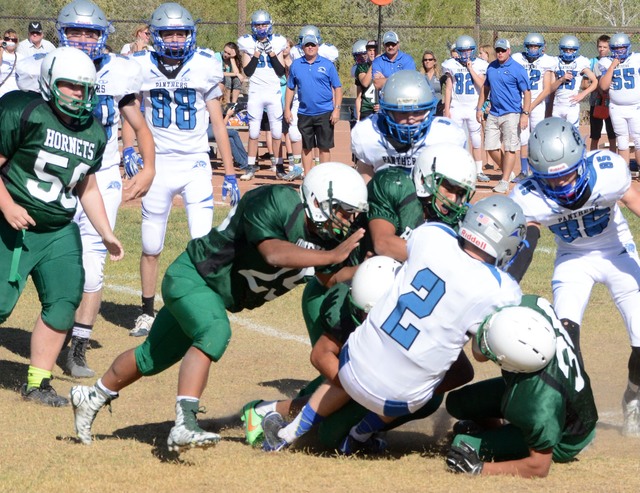 Pahranagat Valley football coach Dr. Ken Higbee will be going up against an undefeated Tonopah team Friday during homecoming week. That is pressure enough, but off the field that seems meaningless when dealing with a criminal investigation, which forces him to coach from the press box.

This investigation has been going on since late last year.

The coach that broke the record for the longest winning streak at 94 (the streak is now at 98), is also the principal at C.O. Bastian High School in Caliente. According to the Lincoln County Record, Higbee has been on paid administrative leave. The coach is known for building the football program while serving the high school in various coaching roles for over 25 years.

The Lincoln County District Attorney’s office said they could not comment on an ongoing investigation.

The Lincoln County Record said the investigation is being conducted by the state because the county is so small that a lot of the deputies have wives that work in the school district and in their Sept. 29 story said the investigation would be concluding shortly. The paper also said numerous supporters of the coach showed up at the last school board meeting on Sept. 8, demanding the coach return to the sideline.

According to Assistant Director of the Nevada Interscholastic Activities Association Donnie Nelson, the NIAA athletic handbook has nothing in it preventing Higbee from coaching.

A call to the Lincoln County School District yielded no information. Nobody was willing to go on record to answer that question.

Pahranagat Valley Athletic Director Brad Loveday said Higbee was conducting business as usual. He said he wasn’t worried about the streak and takes one game at a time.

“He’s a great guy, and he will be exonerated in time,” Loveday said.

He also said that the coach has many supporters on and off the field that believe in him.

Some of the athletic directors in the Nye County that play Pahranagat Valley were surprised by the allegations.

“Ken (Higbee) is a good guy and always has good things to see about us every year,” Tonopah Athletic Director and Assistant Football Coach Steve Stringer said. “You can tell that it’s more than just X’s and O’s to him. He does it for all the right reasons. He teaches his team to be responsible citizens and life skills.”

This year was supposed to be Higbee’s last year regardless of the findings of the investigation.