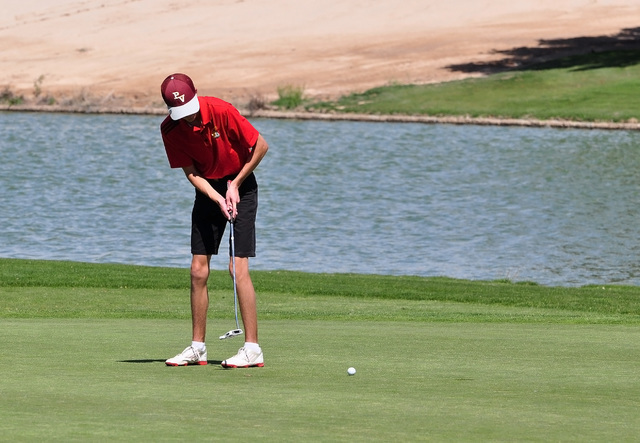 Horace Langford Jr / Pahrump Valley Times Former Trojans golfer Derek Moore putting conventionally on the green at Mountain Falls. Anchored putting was only used the by 15 percent of the golfers.

Most golfers in town have heard about the Professional Golfers Association of America and its ban on anchored putting. Or have they?

I heard of the ban, but since I have always putted using conventional methods I never really paid attention to it, local golfer Ryan Ancell said.

And most golfers in town were probably like Ancell and were not affected by the ban.

Anchored putting is when the club is intentionally anchored against the players body. This could mean the gripping hand or forearms are also held against the body.

The ban not only affects those on the professional tour but amateurs as well.

According to the PGA, anchored putting is pushing the ball and not stroking the ball. Putters would intentionally anchor the putter against the players body. This could mean the gripping hand or forearms are also held against the body.

Frank Cox is the golf director for the Pahrump Valley Junior Golf Association and he said he was disappointed in the PGA decision.

The ban affected me because I have been doing this for a long time, Cox said. When people anchor putt they use a long putter. My friend showed me how to do this and I made ten 10-foot putts in a row.

Cox believes that 15 percent of the professionals were using this method.

When the PGA banned the use of it, many of those pros scores tanked because they had to learn a whole new method of putting.

He pointed out that one of the few anchored putters not affected was Bernhard Langer. He kept his long putter and just improvised. Cox said Adam Scott was another golfer who was an anchored putter on the pro tour, but adapted.

He is the number one leader on the senior tour and he has found a way to use the long putter and I think he outsmarted the PGA, Cox said.

When the ban was announced in 2014 there were many people upset with the ban and many protests.

They were mad because they felt it hurt golf, Cox said.

Cox says in his opinion, the ban should just have been on professional players and not the whole community.

Randy Mudge, director of golf at Mountain Falls, said he really had no opinion on it because he feels it wasnt an advantage.

If it was an advantage, everyone would have been doing it, he said.

The protesters used Mudges argument too.

Since the ban, there has been movement toward the counter-balanced putter, which has been around for years.

The reason why the counter-balanced putter is an alternative is because it feels stable.

Counter-balanced putters feature more weight at both ends of the club that, the theory goes, helps stabilize the arms throughout the stroke, said Golf Magazine.

In conventional putters you will feel the weight at the bottom of the club, Cox said. But with counter-balanced putters the weight is distributed throughout the club.