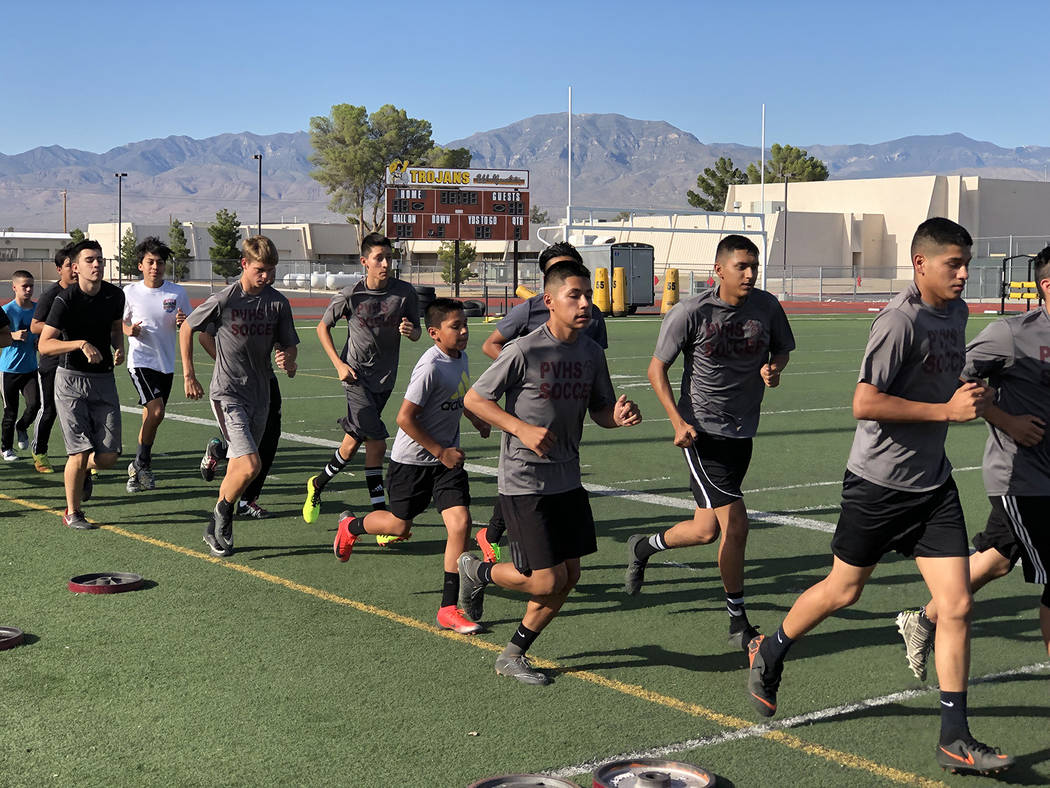 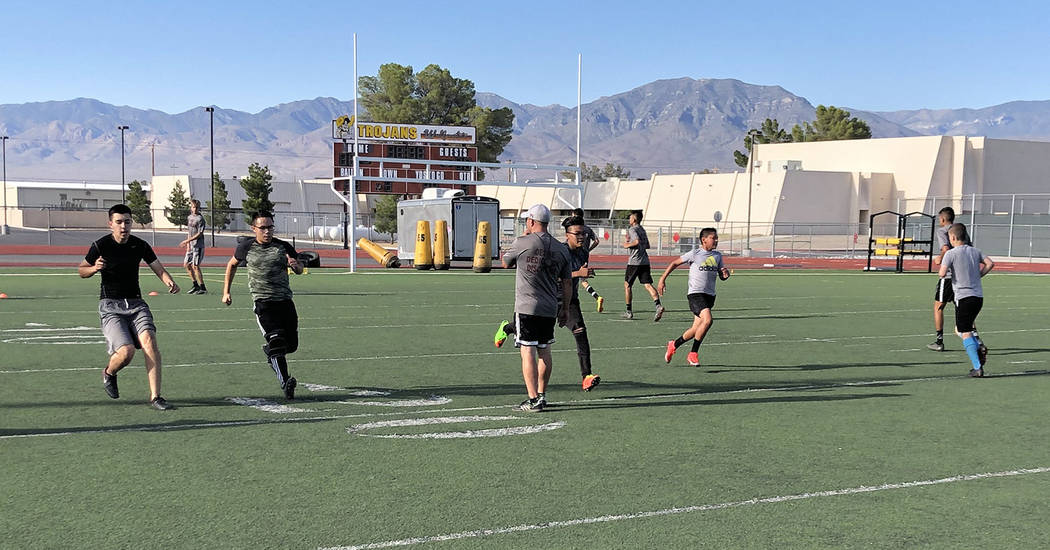 Tom Rysinski/Pahrump Valley Times Pahrump Valley High School boys soccer coach Chris Roberts watches his players sprint toward him and then jog back during conditioning drills July 9 at the school. 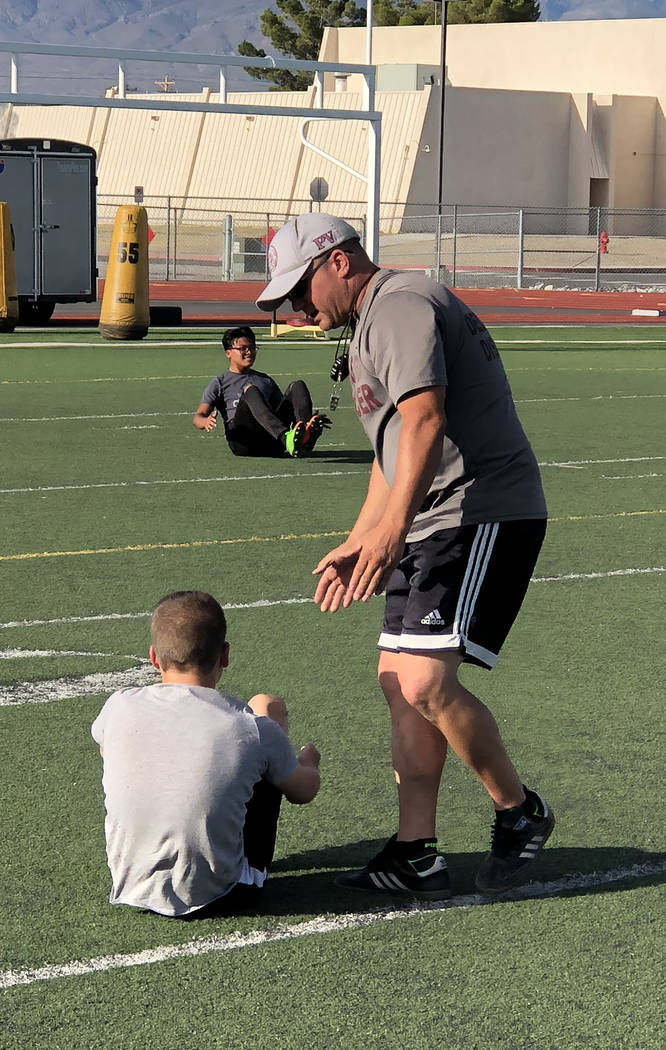 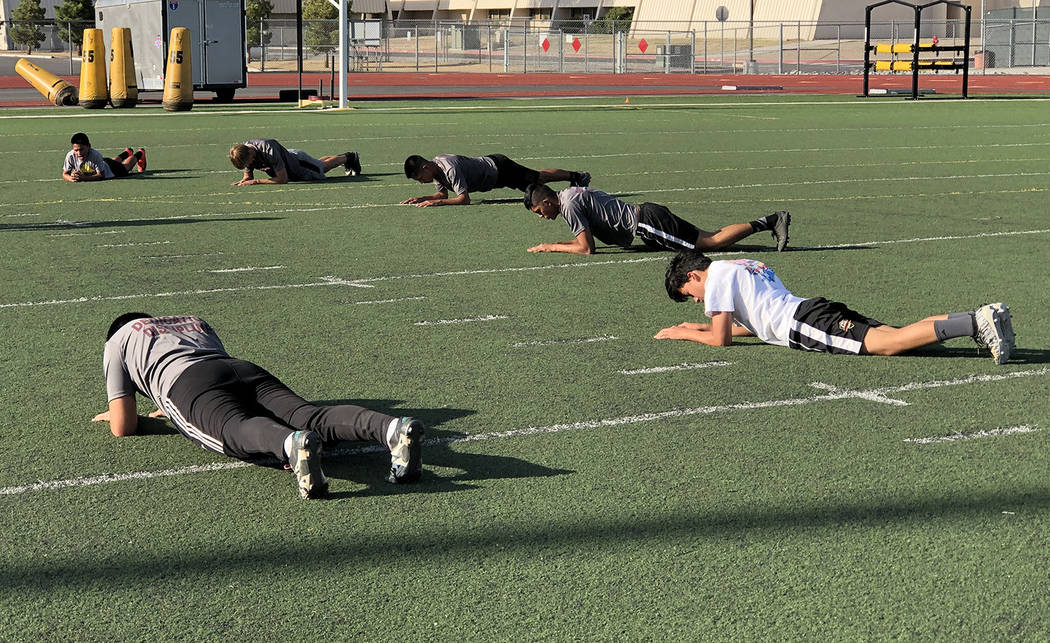 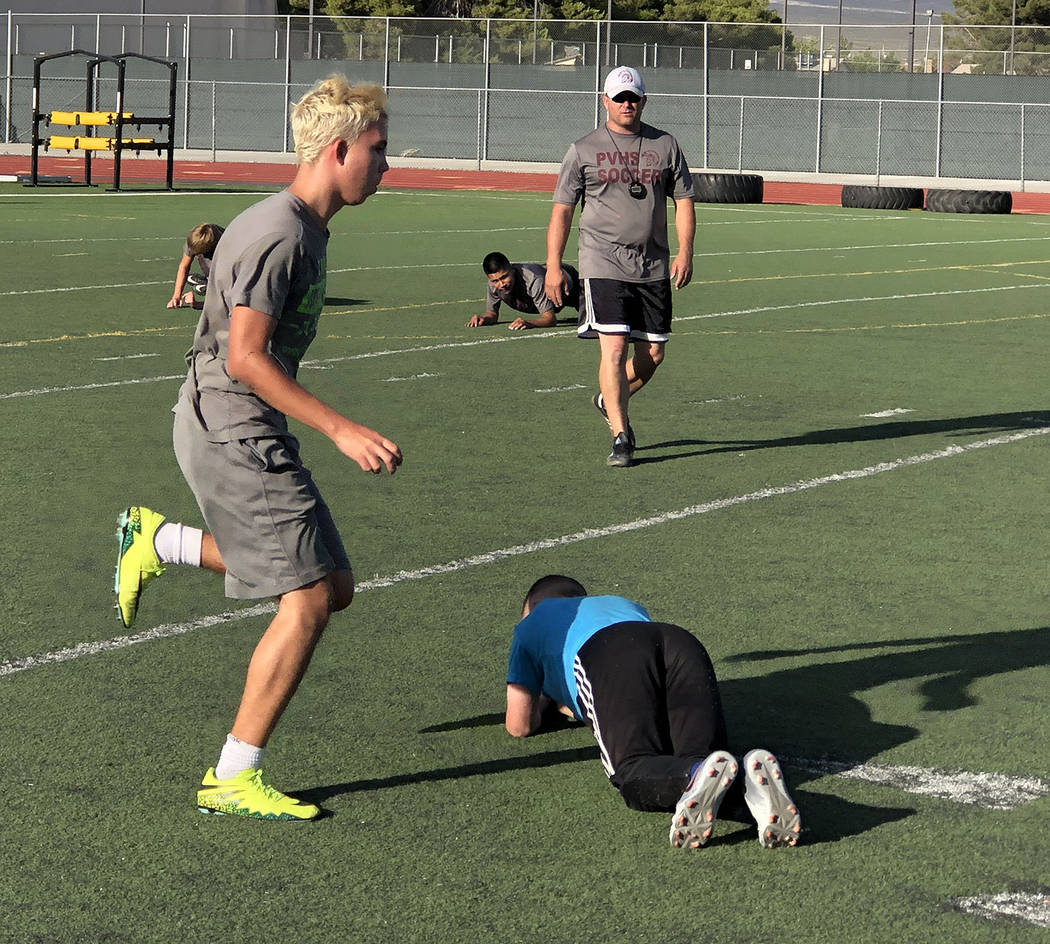 The Trojans defeated Del Sol 2-1 in the final game of the regular season, pushing them past the Dragons and into fourth place in the Sunset League, qualifying them for the Class 3A Southern Region Tournament.

But with Sunset League Most Valuable Player Jose Chavez graduated and the league sporting an expanded nine-team lineup, the Trojans will be hard-pressed to return to the postseason.

Coach Chris Roberts has the Trojans starting that journey now, holding two-hour workouts four days each week. Last Tuesday there were 16 players on the field, and the day before five freshmen were out there. But with some players still on vacation with their families and a couple of others at camps, Roberts was not sure exactly how many players with which he will have to work.

“It’s hard to say,” he said. “I’ve had a couple of players switch over to cross country, which I didn’t quite understand. Every year things happen. People leave, you get a foreign-exchange student, you just never know. You have to be open to options of formations, how you’re going to play. You can’t do the same thing every year because personnel is going to change.”

So does that mean it’s too early to start thinking about the plans for the season?

“I think about it all the time,” Roberts said. “I’m always thinking about who I have left from last season, positions I need to fill, and that will make a difference in what formations we’re going to run.”

But without a better idea of what his roster will look like, Roberts keeps much of that in his head. Besides, there is an important task at hand.

“Conditioning,” Roberts said, was the focus of the early workouts. “Usually they haven’t done anything for a couple of months — if they did play a sport they kept a little conditioning — but we get them just touching the ball again. A lot of people don’t realize you can run anywhere from 3 to 7 miles a game depending on position or how hard they run.

“First year we didn’t have a whole lot of players so I didn’t overwork them because our depth wasn’t very good,” he explained. “Last year we had decent numbers. This year, too early to tell. I don’t know yet.

“It’s interesting. We came off the best season we’ve had in more than a decade, and now we’re low on numbers.”

So as the Trojans did exercises to work their cores, ran several short sprints and completed other conditioning drills, the high of making the playoffs was nowhere to be felt. The sheer joy of that playoff-clinching win, the small but very noisy crowd at Trojan Field firmly behind them, seems like a distant memory.

The squad already had to replace Chavez, who scored more than 41 percent of the Trojans’ goals last fall, and Alvaro Garcia, who was second on the team in points. A thin roster will make this season even more challenging.

“Definitely I’m a little concerned,” Roberts said. “We’ve got to find players who will step up.”

The Trojans open their season at home Aug. 26 against SLAM Academy. The only other non-league game will be two days later at Virgin Valley. Sunset League play opens Sept. 3 at Somerset-Losee.