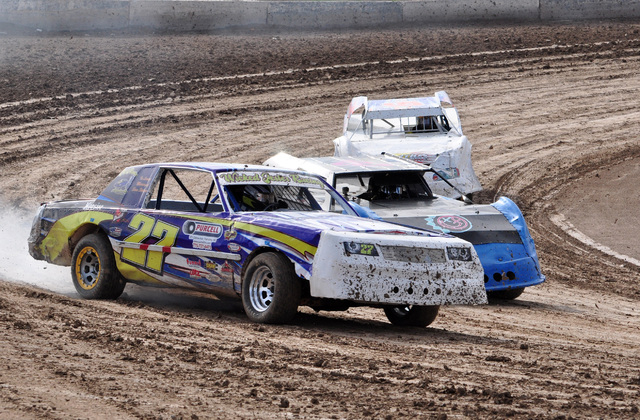 The speedway, according to Chad Broadhead is doing better and he says he probably could keep things going for another three years.

The car count for this year has been between 35 and 45 cars said Broadhead, promoter and operator of the Pahrump Valley Speedway, and that’s what it was last Saturday.

This past week the Modified Division posted nine cars which was slightly up since the March 28 race by two cars.

Broadhead said his Modified numbers are down from last year and it definitely is lower than Mohave Valley speedway’s Modified numbers, but he believes it has nothing to do with him getting rid of the International Motor Contest Association sanction.

“I don’t really think it has made that much of a difference from last year since we have been keeping track,” he said.

He said that he got rid of the sanction due to a conversation he had with an IMCA representative.

“The IMCA representative said he really could care less about our track or our drivers,” Broadhead said. “I was talking to him about having sanctions on top of each other because they will not let us race the same day as Mohave Valley speedway in Arizona. That has been the same for the past seven years. We have always had to race on the opposite weekends.”

Broadhead said that the IMCA representative said his numbers at the track were too small to be important to the IMCA and that’s when Broadhead made his decision to let the sanction go. Broadhead said the Pahrump Valley Speedway just is not big enough like the big speedways back East.

“If we were getting 30 to 40 cars a night, that would be a different story, but with eight to 15 cars a night, he (IMCA rep) could care less,” Broadhead said.

The promoter said the Modified count has been lower than Mohave’s but he doesn’t see a correlation to the loss of the IMCA sanction.

In the end Broadhead said he is for all the drivers.

“IMCA did something they shouldn’t have done and said something to me they shouldn’t have said,” he said. “If my drivers don’t like it (no IMCA sanction), then that’s really too bad. I don’t think my drivers have to play second fiddle to anybody. I think my drivers are just as important to the ones back in Ohio and anywhere else. My drivers and my racetrack are just as important. If IMCA can’t agree with that then the hell with IMCA.”

Broadhead knows that the After the Dual in the Desert Race at the end of the season is a big race for him but it is in limbo now because he says he doesn’t get enough local support for the race. Last year he had only five local Modified drivers in the race.