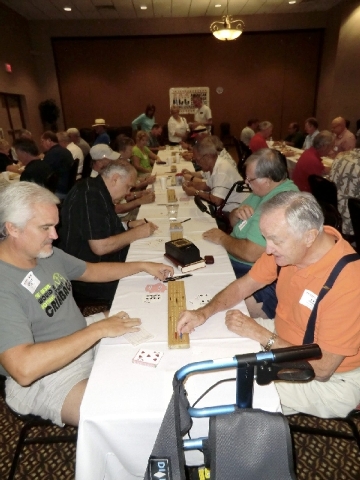 To participate in the action, players don’t have to be a previously registered player in the ACC. Pahrump Valley Peggers President and one of the tournament organizers, Denise Fortin, said players can register at the tournament. The Peggers are a local cribbage club, which gathers for a weekly game at the former Wulfy’s.

Fortin said the ACC will have sign-up sheets there and the cost is $15.

This tournament is being billed as an open regional tournament and is expected to attract close to 100 players this year. It will be held in the Pahrump Nugget Event Center. The tournament had 63 players last year.

“The tournament surprisingly draws more non-locals, mainly from California and Las Vegas,” Fortin said. “Many of the people that come in are single players.”

When asked who are the better players, men or women? Fortin replied, “A man won last year’s tournament, but the winners seem to be evenly split over the years. So you really can’t say men or women are better cribbage players.”

Fortin is an avid cribbage player and added that Reno has a big tournament in February, which has nearly 1,000 members attending from all over North America.

She said there are over 150 ACC-sanctioned tournaments per year. The prize money for these tournaments are in the thousands. The organization has nearly 7,000 members across the country.

The local club, which has 40 members, meets at noon every Thursday at Wulfy’s. On average about 20 players show up each week to play.

This tournament has the unique distinction of being the first tournament of the 2013/2014 point season in the southwest.

Members accumulate Master Rating Points (MRPs) with the person earning the most points in the season crowned National Champion. The top 10 point leaders are the season’s All-American Team. The season runs from Aug. 1 through July 31.

Many people who play poker are familiar with the term — “poker face.” Fortin said cribbage players have a “cribbage face.”

“There are times in the game where you want to hide the fact you have a good hand,” she said.

Fortin is very enthusiastic about the game and said when she retires she hopes to win lots of tournaments. She has been playing for the past 40 years. The most she has ever won was $600.

“I know plenty of people that just travel and play on their winnings and that is how they get to all their tournaments out of state. I want that to be me,” she said.