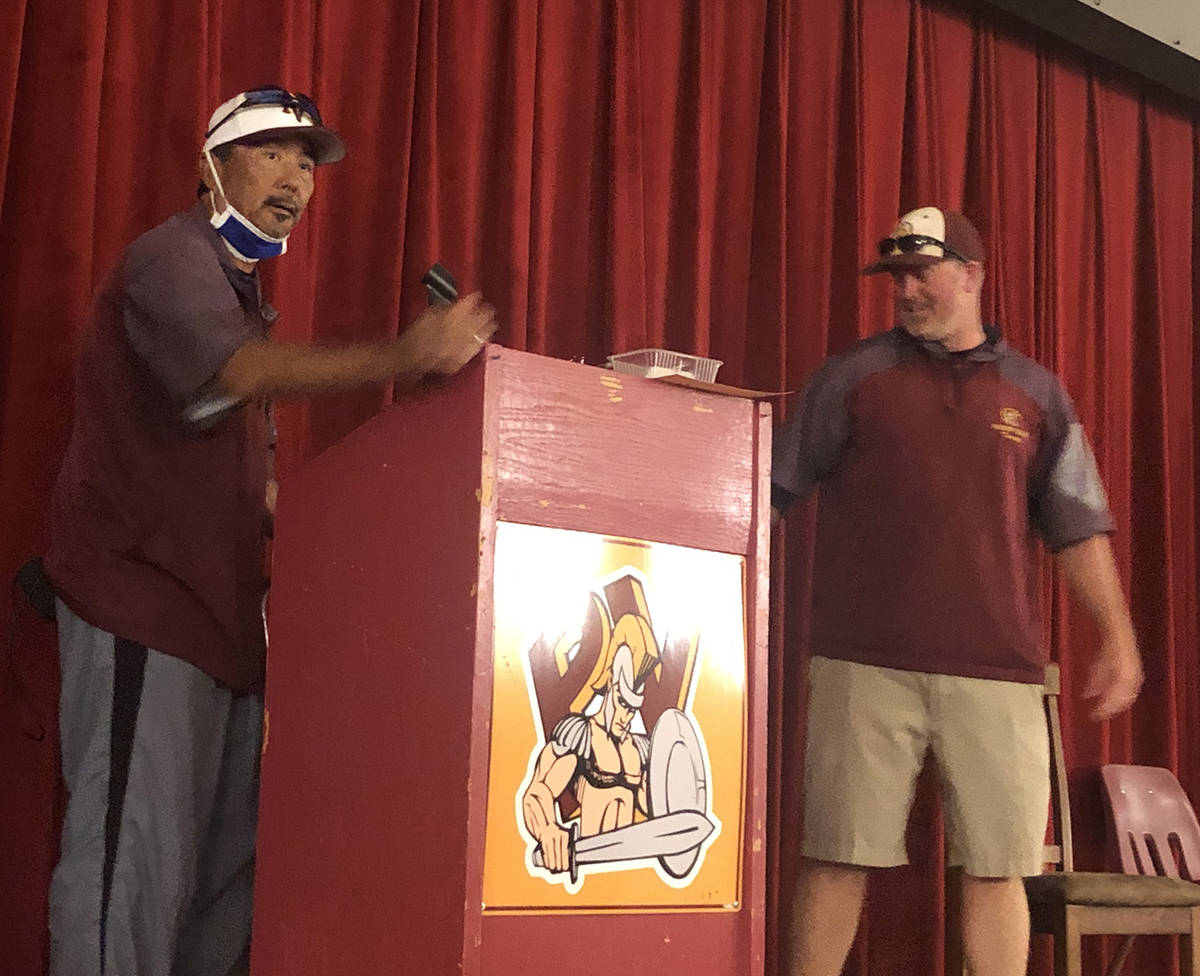 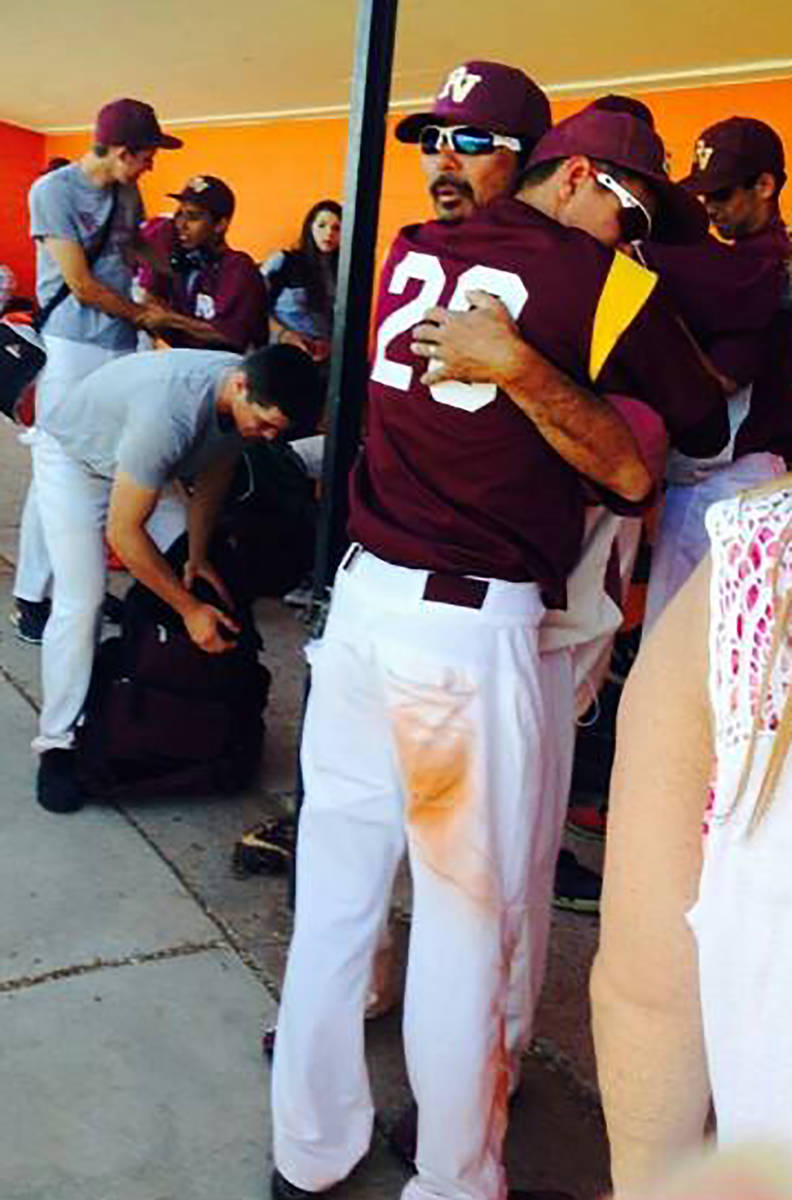 Uyeno recently had to take a short break from his assistant coaching duties with the Pahrump Valley High School baseball team for health reasons, and while he was cleared to return during the first half of the past season he still looks as if he would be very comfortable sitting on a beach in Hawaii drinking mai tais, or at most perhaps running a shaved ice stand.

But baseball runs through Uyeno like blood, and when Brian Hayes stepped down as the Trojans varsity coach to spend more time with his family, Uyeno sought the chance to step up.

He was given that chance Monday, when PVHS named Uyeno its varsity baseball coach.

“I am super excited for Coach Roy,” Hayes said. “He has been my left-hand man since I took over the program close to 10 years ago. Easily, the best assistant coach I have ever worked with. His greatest attributes are he loves the game and his passion and commitment to the student-athletes.”

“We interviewed several quality candidates,” athletic administrator Jason Odegard said, declining to get into specifics. “Coach Uyeno has been with the baseball program many years and has proven his knowledge, dedication and passion for the game of baseball and PVHS over that time.”

And grounds keeping. Uyeno is perhaps best known for putting in hours maintaining the grass at Rod Poteete Memorial Field, often showing up at the school after an overnight shift to work on it. Uyeno is the type who does so much for the program you don’t notice until he’s not around for a couple of weeks.

“The kids this year got to realize what Coach Roy does, because when Coach Roy couldn’t do it, we didn’t do it,” Hayes said. “This year was interesting because he had some health issues, but he was still out there with his little beeper on the side, and when that things goes off we know he’s got to take a rest. But our field looks phenomenal because of Coach Roy.”

When there are players on the field, Uyeno has been in charge of the outfielders, and while he gets rave reviews for his work with them from the other coaches, he deflects the credit back to the players.

“My outfielders are all pretty good,” he said Monday while taking in a Connie Mack game at Ian Deutch Memorial Park. “For 10 years, I was blessed with outfielders with speed. I always had good outfielders, so I had the easy job. Now I’m going to have to coach everything, so it will be another story, right?”

Self-deprecating humor aside, Uyeno has a layer of intensity below the surface that belies his casual exterior.

“When we lost to Virgin (11-8 on May 3, giving them a 4-game losing streak), I gave the kids an ultimatum,” Uyeno recalled. “We never lost to Virgin since I’ve been coaching, and we lost to them, so we’re going to work harder. They realized what the game needs. When we get chances, you need to move the runners, you can’t always swing for the fences. Do your job. Put the ball in the hole.

“They finally caught on, and we gave Boulder a run.”

That they did. After the loss to the Bulldogs, the Trojans went 8-1 down the stretch, losing only to Bishop Gorman and beating Virgin Valley twice before coming up short in the 3A South Region Tournament final against Boulder City.

Uyeno has seen a lot with the Trojans, coaching there in 2004, then coming back in 2010 under former coach Rich Lauver.

“We were in 4A at that time, playing Bishop Gorman, Faith Lutheran, Desert Oasis, and when he stepped down Coach Brian took over, and he had the same philosophy, basically,” he said.

Uyeno has high regard for both of the head coaches he has worked with, and he wasn’t just an assistant coach, he was a baseball parent. Son Brandon graduated in 2008, and son Chad graduated in 2014. Being around the program that closely for that long has told Uyeno not much needs to change.

In fact, the biggest thing he said that needed attention was drawing more kids into the baseball program.

“We have to work on our JV program,” Uyeno said. “We need to get more kids interested in playing for us. The summer program is good that Coach Drew (Middleton) is running, so they can come out and see what our program means. They’re doing good right now, they’re winning, and maybe by the time we start playing baseball again (in the spring) some of these boys that play other sports will want to come out.

“When you win, people want to buy in. We’ve been winning the past few years. I give credit to Coach Brian. I’ve got big shoes to fill. But we can do it. The boys can. They’ll do it for Coach Roy.”

And they most likely will, largely because Uyeno has been prowling the baseball fields of Pahrump since he moved to town.

“Coach Roy has been the face of Pahrump baseball ever since he coached his own sons, Brandon and Chad, in Little League,” Hayes said. “Everywhere you go and see coach Roy, he’s dressed in his PVHS gear. He loves the game and has a lot of pride in our program.”

Players can sense that. Uyeno said he received texts from players every day when he was in the hospital, not only buoying his spirits but reminding him there were many reasons why he needed to take better care of himself.

“I’m not smoking; I was smoking a half-pack a day,” Uyeno said. “I was drinking too many Monster drinks, too much caffeine, because I worked nights and I need to stay up. My heart was pumping so much, and high blood pressure made it worse. It made me scared, and I listen to what Charlotte says. Whatever she wants, she gets.”

Sort of. His wife Charlotte had hoped he would retire a couple of years ago, but now, with improved health habits and clearance from his doctors to coach, she enthusiastically endorsed Roy applying for the head coaching job.

He would have found a way anyway. In one way or another, Uyeno has coached baseball for more than 30 years between Pahrump and Hawaii, and when told Uyeno probably would coach until he couldn’t stand, Middleton joked that Uyeno would have an elevator built so he could watch games from the press box and zip down to talk to players between innings.

While that is not necessary just yet, there is work to be done. There is a strong group of rising juniors — led by all-region players Kyle McDaniel and James Metscher — that will guarantee a solid team for the next couple of years, but Odegard sees success continuing under Uyeno after the Class of 2023 graduates.

“We look forward to continued success in the baseball program under him and his staff,” Odegard said.

Hayes expects the same. “Overall, I am excited. Coach Roy is vested in this program and will keep it running on all cylinders.”