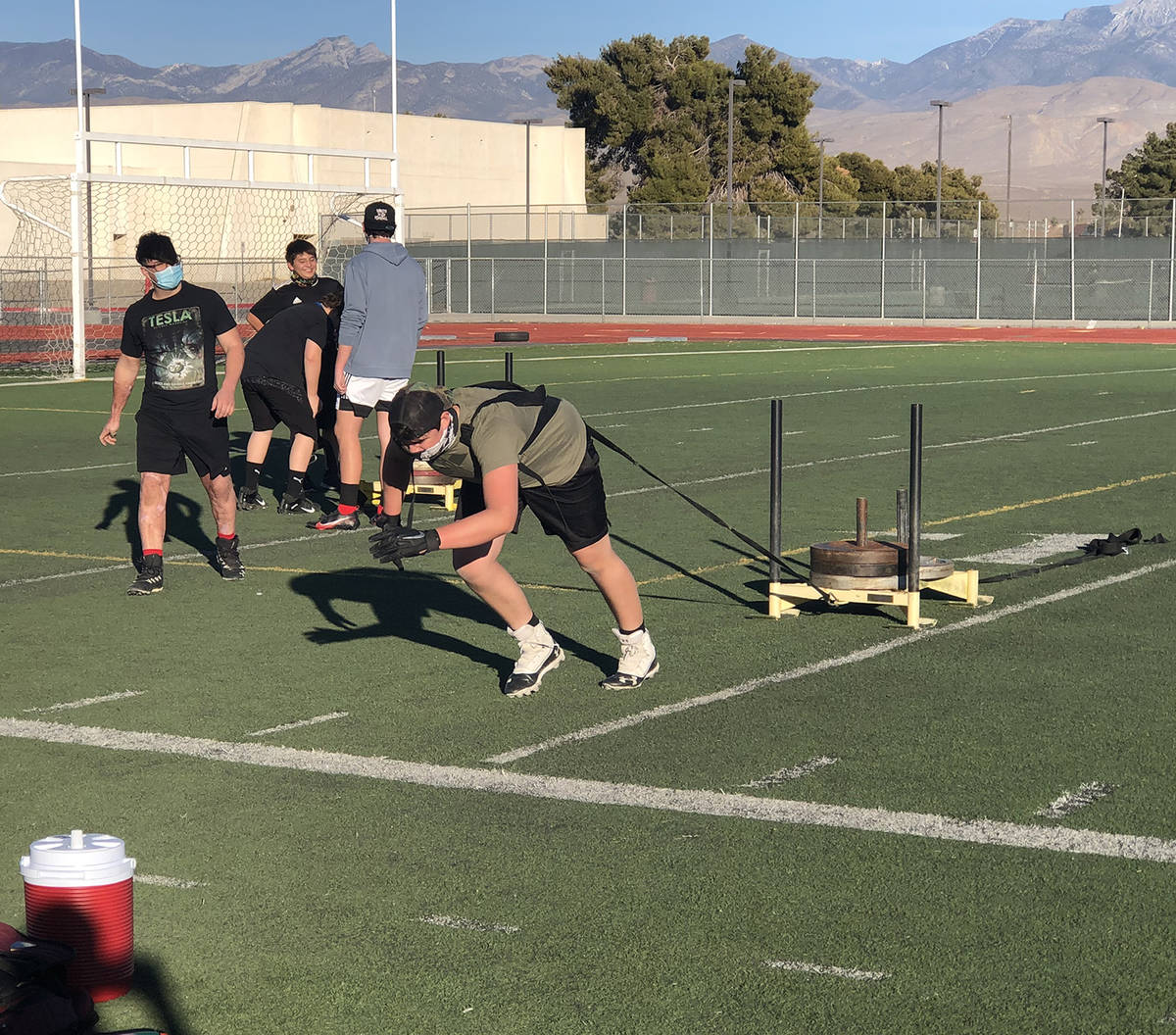 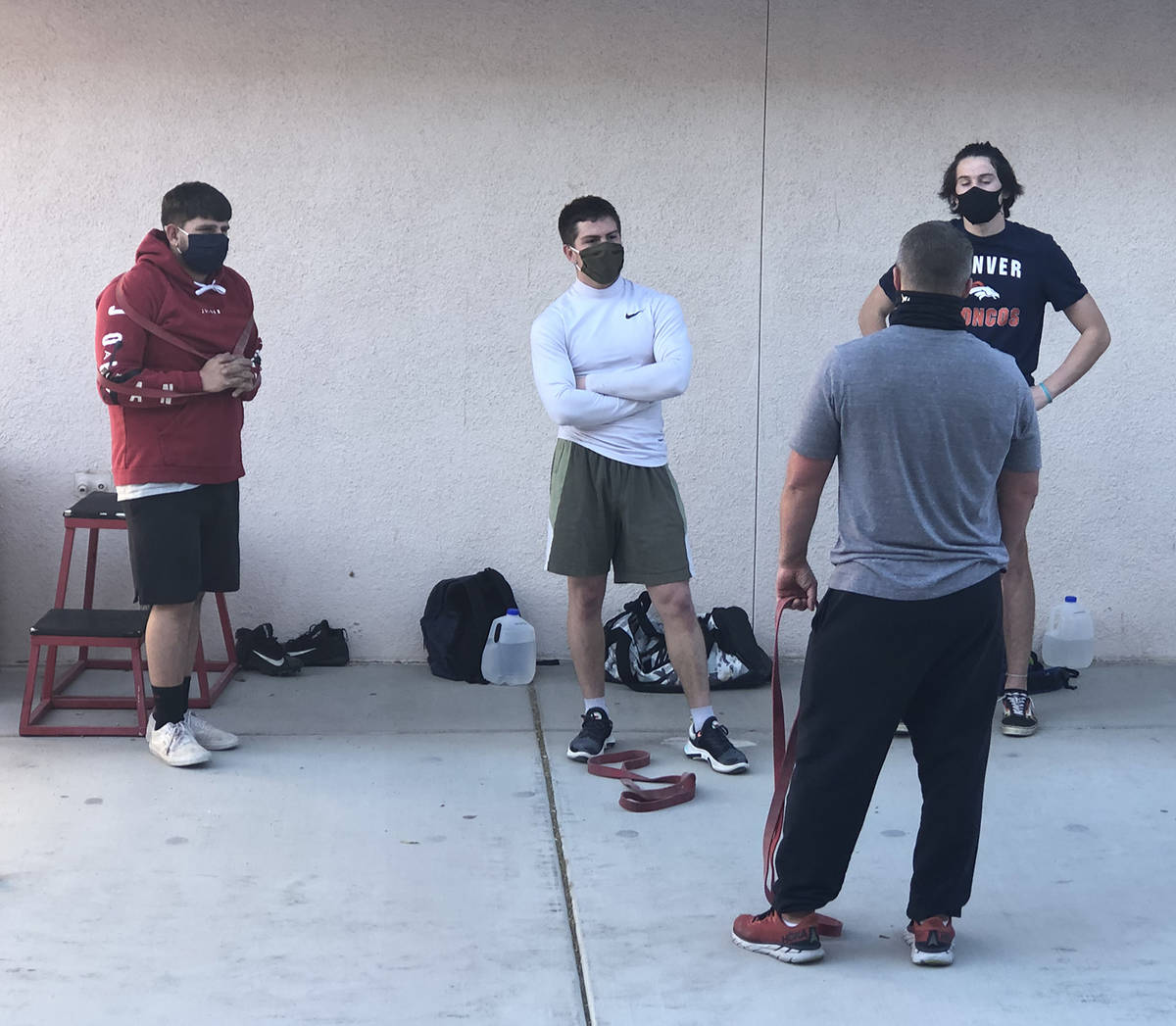 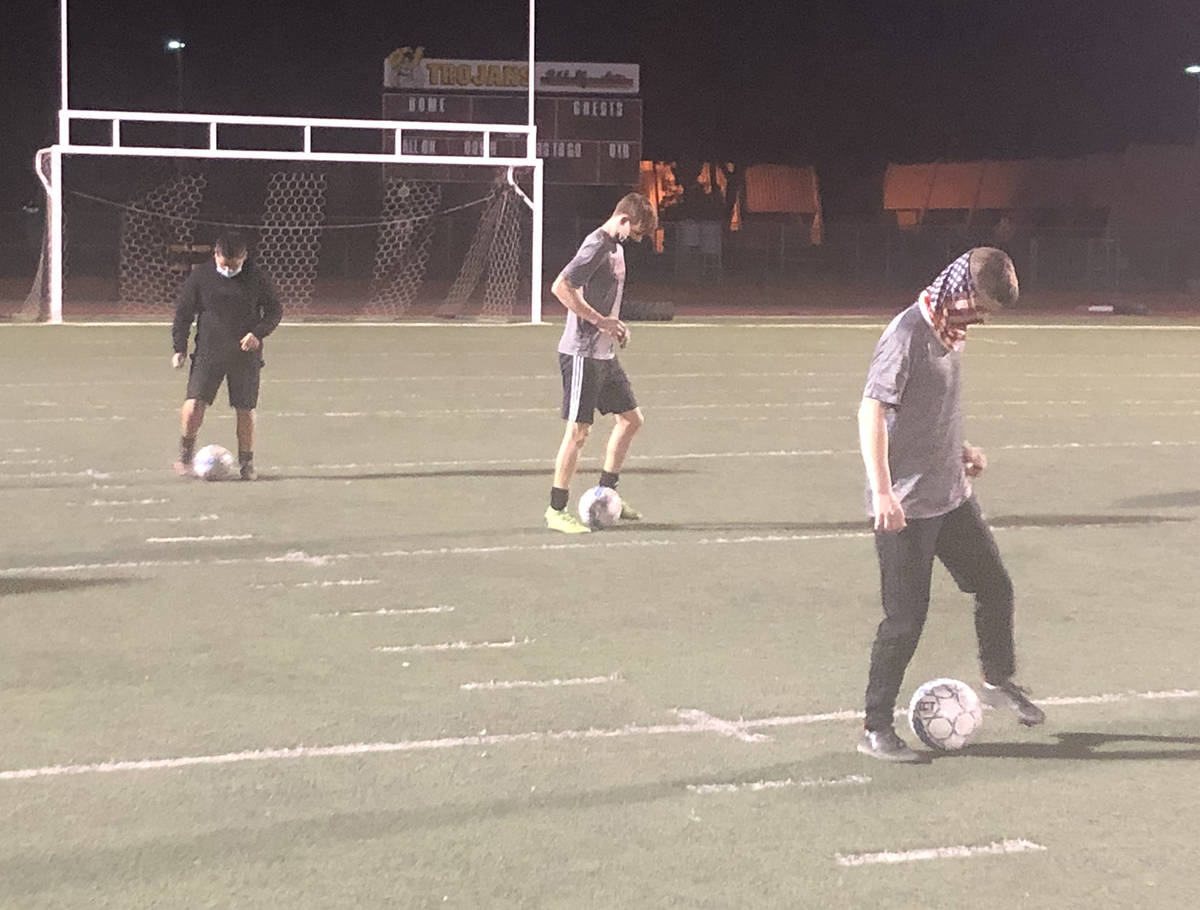 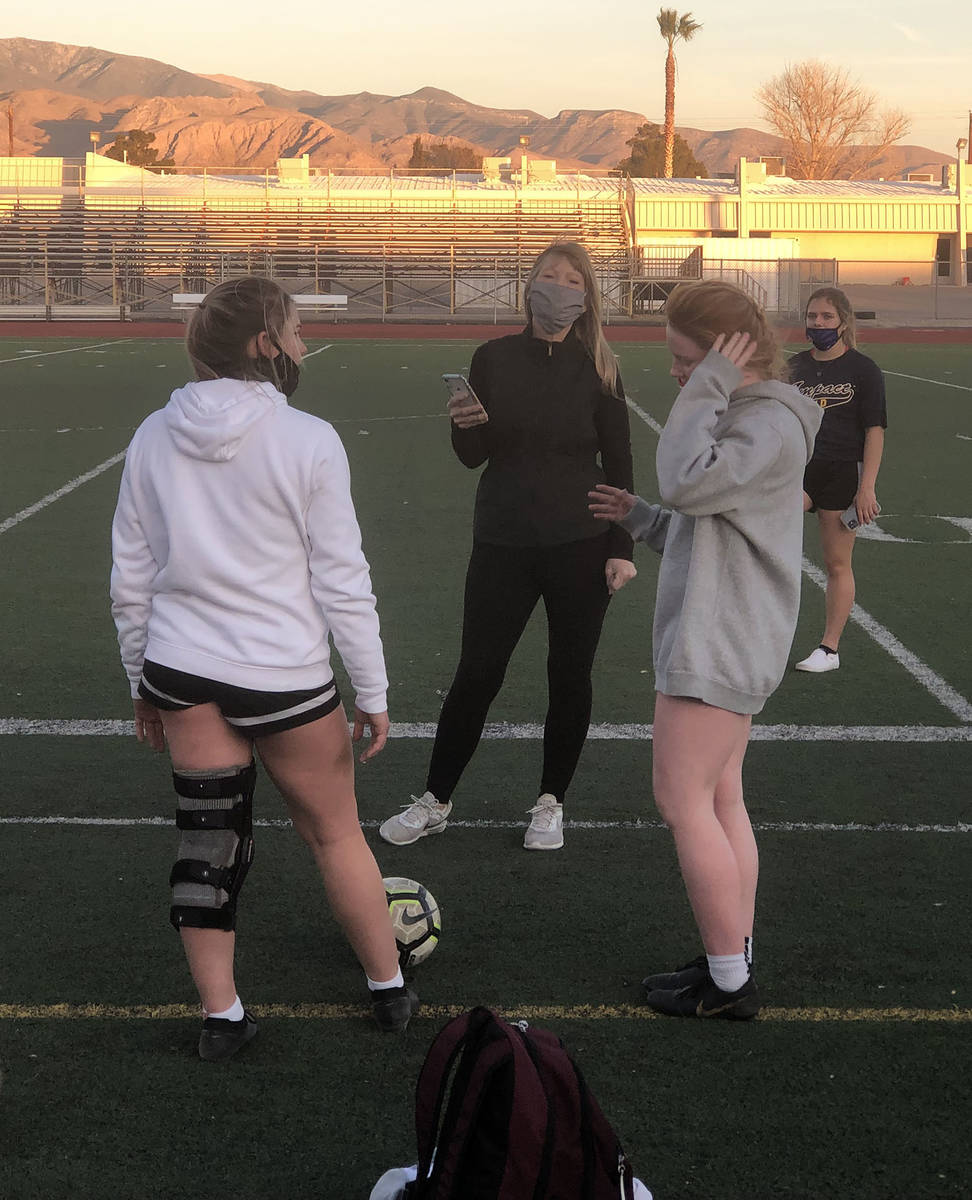 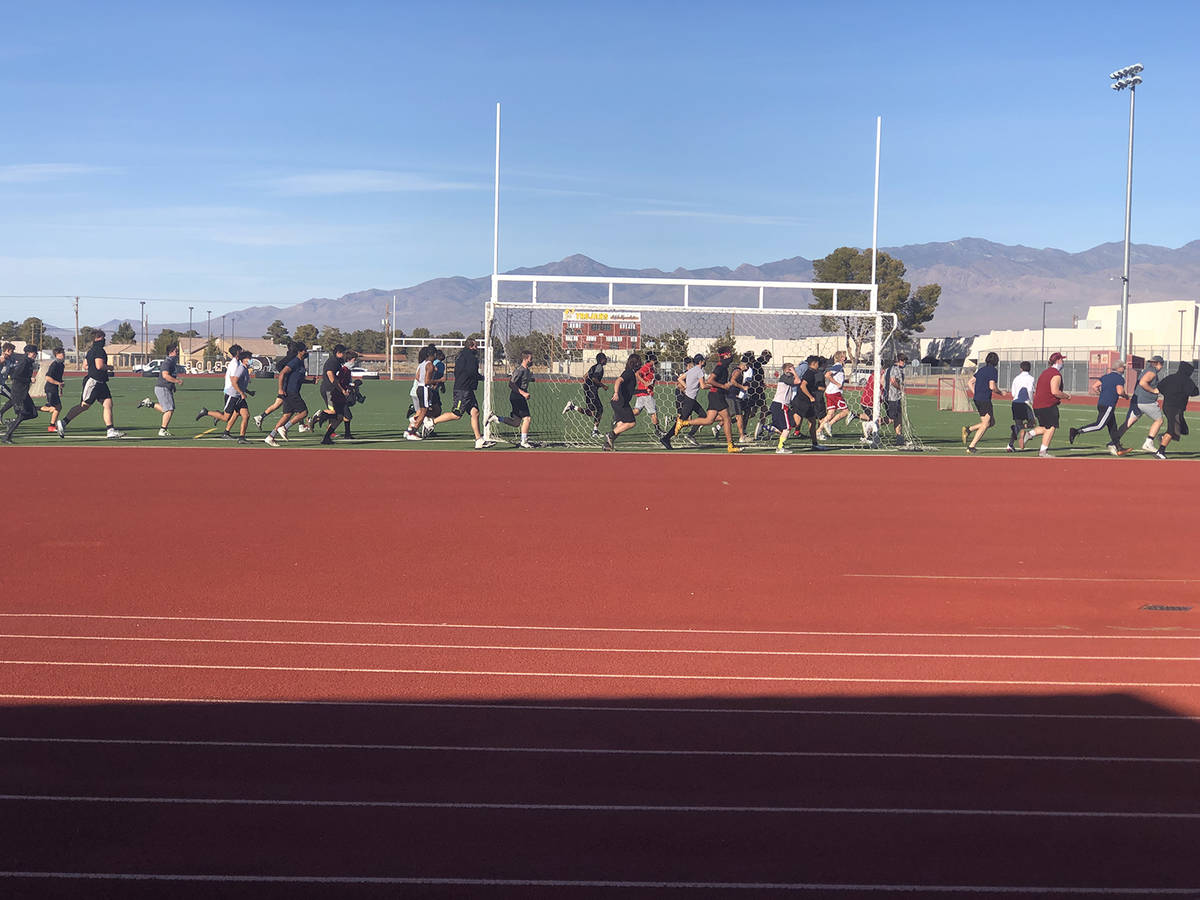 Tom Rysinski/Pahrump Valley Times Football players run a lap around the field before the start of a conditioning session Jan. 14 at Pahrump Valley High School.

With the start of official practices for fall sports just weeks away, student-athletes at Pahrump Valley High School have begun preseason conditioning on the turf at Trojan Field.

But while the soccer players can feel confident that there will be a season of some kind, barring another setback in COVID-19 statistics, football players have to keep their fingers crossed, awaiting their fate.

But that uncertainty has not dampened enthusiasm, according to Trojans football coach Joe Clayton.

“With everything going on and us working really hard and then having to stop, start, stop depending on the restrictions, we were really concerned with what our numbers would be when we came back, and we’re pretty pleased,” Clayton said. “We have between 60 and 70 boys showing up, and that’s our normal number. We’re happy if we get 60, and anything above 60 is a bonus.”

Football, classified as a close/full-contact sport by the National Federation of State High School Associations, is on the state’s no-play list, and that status will not be revisited until the end of Gov. Steve Sisolak’s current statewide pause, which runs through Feb. 14. Coincidentally, the scheduled first day of official football practice is Feb. 13.

If football is permitted, the Trojans will face an unusual schedule because of the decision last week by the Clark County School District to cancel the fall sports season. Clark County schools make up the bulk of the Class 3A Southern League in which the Trojans play, but two other league schools — Moapa Valley, not affected by the CCSD’s decisions on canceling both fall and winter sports, and SLAM! Nevada, a charter school — can field a team if given the go-ahead by the state.

”We’re a little confused as to why Virgin Valley didn’t go the same route as Moapa, especially since they are next-door neighbors, which would have allowed us to have a couple more games with a rival rural school,” said Clayton, figuring on home-and-home series with Moapa Valley and SLAM! Nevada and possibly a game against Faith Lutheran, which recently reopened.

Girls soccer coach Julie Carrington had her players taking the field as the football team was wrapping up drills, and she agreed that playing even a few opponents is worth the effort.

“I would love to, and I know the girls would love to,” she said of a potential modified schedule. “I can’t speak for the administration, but I’m sure they will do what’s best for kids. We’ve got to keep them safe. We don’t want them ill. It is going around, the rates are rising, but we want to give them what we can.”

“I’ve been playing soccer since I was a baby,” senior Kaylee Mendoza said. “If I can come out here and touch a ball, it makes me happy. I don’t think it’s a waste of time because I think there’s a really high hope of being able to play at least some games this season, and since it’s my last year I hold on to a lot of hope.”

“I try not to think on it,” Lopez said of not having a season. “I try to stay positive and act as if there is going to be a season and work as hard as I can so I can be ready if there is a game.”

And if somebody said there would be wrestling that day?

But while almost everyone says the right things, it isn’t easy to keep the negative thoughts out of the heads of high school students faced with possibly losing their senior season, something that happened to spring sports athletes in the class of 2020.

“I would say it’s harder to get the boys out here and keep them motivated because of unknowns, but a lot of them are at least coming out and participating and trying to get better,” boys coach Chris Roberts said as his players followed Carrington’s onto the field.

“When it does come, it’s going to be fast and furious because it’s only six weeks long. And that’s including regionals, if they’re going to have that. It’s going to be very interesting.”

At the same time, if there is a season, nobody wants to be unprepared.

“We’re going to come out here and work our hardest just like we do any other season,” senior football player Andrew Avena said. “We’re hoping the season does go through, and if it does we’ll be ready as much as any other team.”

“We’re going into it with the same mentality, like we’re going to have a season,” senior football player Rance Bill added.

“I definitely worry because personally I’m not planning on playing soccer in college so this kind of is my last year, and I think about not being able to play on senior night and everything I might be missing,” said soccer player Kaylee Mendoza, who is coming off of her second knee surgery after suffering a torn meniscus. “Senior year is supposed to be amazing and fun, and we’re already not getting the opportunity to go to tournaments, which are super fun.

“I definitely worry that there won’t be a season.”

While workouts are not mandatory for fall or spring sports at this early date, many athletes wanted to be there for all of the sports they play, and as basketball and wrestling were not completely ruled out — although the NIAA has since confirmed that, at most, there would be one day of competition for those sports if they are cleared — some of them were very busy.

“It’s basketball season, and I’m practicing basketball as well,” senior Maddy Souza said. “A lot of us are doing both, some people are doing softball and soccer, it’s all crazy.”

Wrestlers also were still at it, despite the slim chance of wrestling matches. Obviously, wrestling also is classified as close/full-contact.

“They do the same routine as the football players. because it isn’t sport-specific stuff that we’re doing,” Clayton said of wrestlers. “They get a good, solid workout for wrestling as well.”

“It’s stance, visualization, shadow wrestling we call it. The boys work so hard (with the football team) for over two hours, so we don’t have to warm up or stretch. We just come in, they put on their shoes, we go through a little technique.”

Clayton said that many of the players have been working out on their own.

“We put a good, solid two months in before they shut us down again,” he said. “Obviously the boys lost a little bit as far as strength, but the nice thing is our upperclassmen spent time in the gym on their own, so just because we weren’t meeting as a team a lot of them were still going to the local gym.

“They probably aren’t getting the same workout they were, but we feel confident that the time we put in early on, they obviously didn’t lose all of it.”

“This offseason I’ve been in the gym focusing on myself, doing speed drills, trying to gain weight,” said Bill, who said he added 10 to 15 pounds to his 6-foot, 4-inch frame.

“We did a little working out, but nothing compared to this,” Lopez said. “This is the best workout you can get.”

All of the work is going into a season that might not exist, and if it does exist, will not include the possibility of playing for a state championship. The NIAA ruled that out last summer, with region championships left up to the schools in each region.

“I think, if anything, we’ll keep the same mentality as if there would be a regional or state championship just because it’s our last season as seniors,” Avena said.

“It hurts the players’ psyche,” said Roberts, who has taken a team that averaged just 4.2 wins over the previous 10 seasons to back-to-back seasons of double-digit wins. “A lot of them were looking forward to this year. This could have been our breakout year where we could have won league and gone to state. Those are the expectations, the things that we were striving for.”

Carrington was thinking about seniors Mendoza, Souza, Makayla Gent and Ally Rily, who have meant so much to the program.

“These were my seniors that were my starting freshmen, so this would have been their fourth year varsity,” she said. “They were really important for us getting to state their first year, and this was supposed to be their year.”

But at least the soccer teams appear destined to have a season. Meanwhile, the football players are doing sprints, lifting weights and pulling sleds with no clue as to the status of their sport’s season.

Not that it showed. It looked like a normal preseason practice. It sounded like one, with Steven Tyler howling one minute and “House of the Rising Sun” playing the next on the giant speaker. Aside from the temperature, it seemed like any other preseason.

“I can’t tell by the work ethic and their training, which is nice,” Clayton said. “They’re all working really hard, and there doesn’t seem to be a change as far as their motivation.”