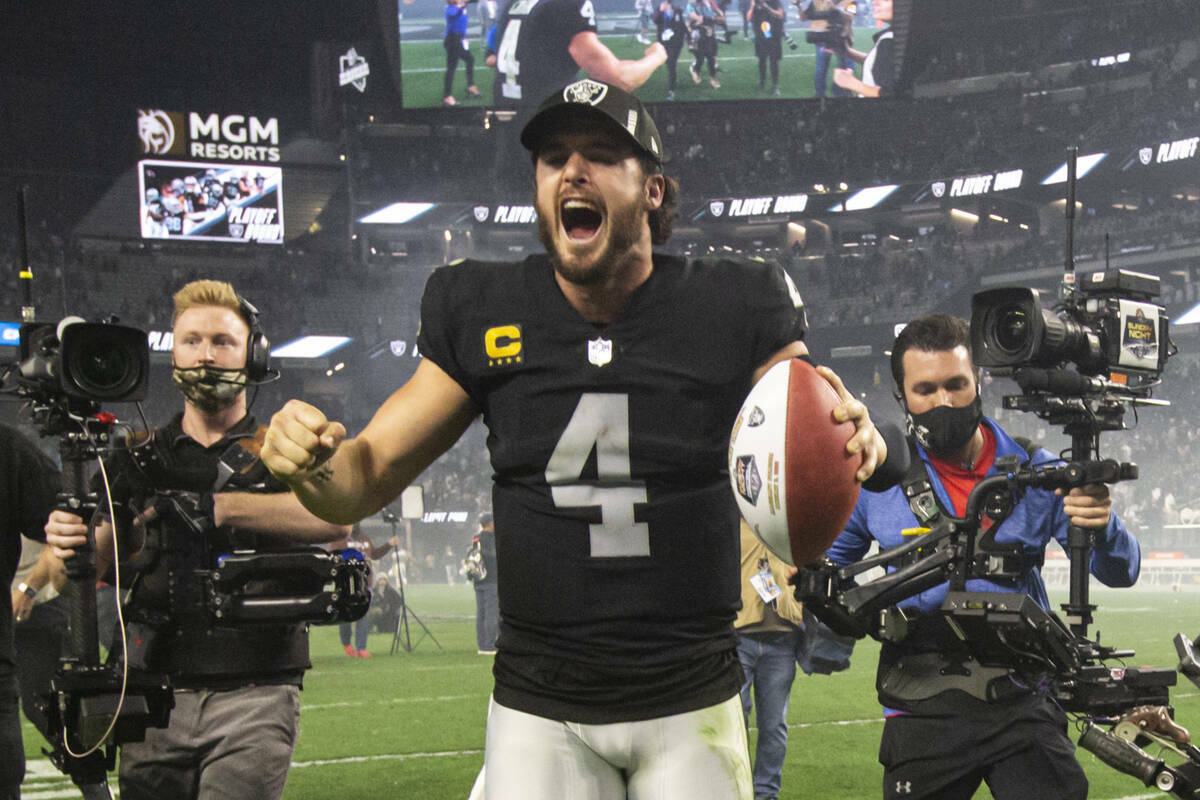 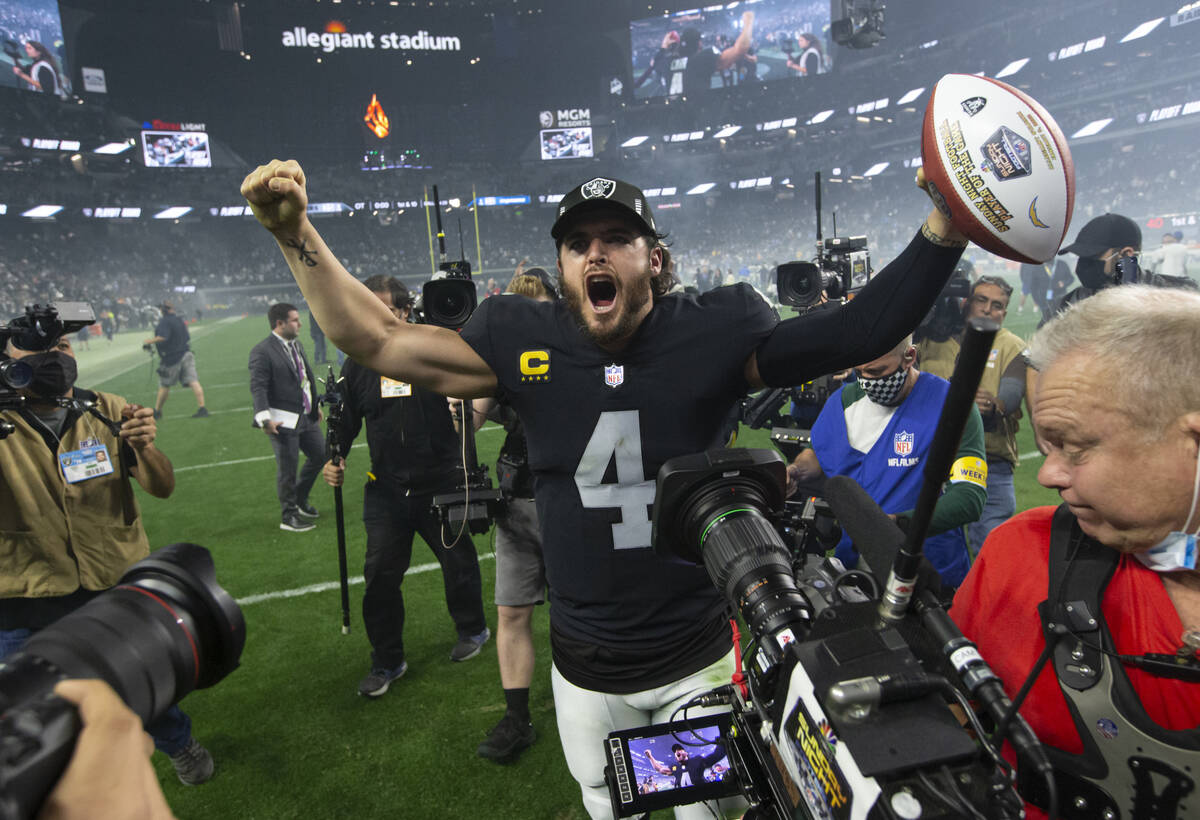 The Las Vegas Raiders defeated the Los Angeles Chargers 35-32 in overtime of a winner-take-all game at Allegiant Stadium on Sunday evening.

Coming into the game, the Raiders were in the midst of a 3-game winning streak. There was a chance they could have clinched a playoff spot before their game against the Chargers was played, however, the Baltimore Ravens weren’t able to defeat the Pittsburgh Steelers earlier Sunday afternoon.

This led to all cards being put on the table for a primetime game between these two AFC West rivals.

“I’m real excited and proud of our team,” head coach Rich Bisaccia said after the game. “I can’t tell you how excited we are for Raider Nation, and to play in this venue with a crowd like that, it was extremely exciting.”

Playoff hopes were very dim for Las Vegas before this win streak started. They had just come away from a 48-9 blowout loss to the Kansas City Chiefs. They were looking at a 6-7 record and sitting at the bottom of the AFC West.

With a little bit of help, maybe some magic, a few COVID-positive players on the opposing sides and Daniel Carlson playing hero a few times, the Raiders have strung together their longest winning streak since 2016.

From the beginning, this game was very different from the first matchup of the season between these two teams. In their week 4 game, the Chargers jumped out to a 21-0 halftime lead, ultimately winning the game 28-14.

On Sunday, it was the Raiders who jumped out to an early 10-0 lead in the first quarter. Carlson made his first of five field goals to give Las Vegas a 3-0 lead after their opening drive.

Carlson’s five field goals on Sunday tied a career high in both attempts and makes that he set earlier this season in a win against the Dallas Cowboys on Thanksgiving.

The Chargers were able to find the scoreboard with an early second-quarter touchdown run by running back Austin Ekeler.

Los Angeles would add another touchdown with a pass from quarterback Justin Herbert to Ekeler just before halftime.

The Raiders went into the locker room at the half leading 17-14.

The rushing attack and the defensive line for the Raiders were the stars on Sunday.

Running back Josh Jacobs had his second game of the season with over 100 rushing yards. He finished with 26 carries for a career-high 132 yards and one touchdown. He also had two catches for 12 yards.

“We looked at the guys, we felt like we could run on them all day,” Jacobs said of the Raiders strong rushing attack. “When it came down to the nitty-gritty, we knew what we were gonna do. I was kind of disappointed I didn’t break the long one, but I was just more so trying to protect the ball, make sure I didn’t fumble.”

Raiders’ quarterback Derek Carr completed 20 of his 36 pass attempts for 186 yards and two touchdowns. This was the first game since week 13 against Washington where Carr didn’t have an interception.

The Las Vegas defensive line came up huge Sunday night. They were able to take advantage of a young Chargers offensive line and get to Herbert all night long.

The Raiders defense combined for three sacks, including two by defensive end Maxx Crosby, and they had ten hits on Herbert.

“It starts up front with the d-line,” Crosby said. “We don’t quit. We have guys who come from all different backgrounds. We’ve got guys from different teams, vets, rooks, everything. But we all have one committed goal: we’re going to play for each other and we’re not going to stop until our heart explodes, then we’re going to play another snap.”

The game began to heat up in the fourth quarter.

After scoring nine points in the first six minutes of the quarter, the Raiders found themselves with a 29-14 lead with just over eight minutes to play in the game.

The Chargers got the ball and marched down the field. Their drive ended with a 23-yard touchdown pass from Herbert to wide receiver Joshua Palmer on fourth down.

Las Vegas wasn’t able to do anything with their next possession, other than run some of the time off the clock.

LA received the ball back and began driving down the field again. This drive ended with a game-tying touchdown pass from Herbert to wide receiver Mike Williams as time expired, sending the game to overtime.

In overtime, neither team could find the end zone. After the teams exchanged field goals, the Raiders got the ball for a second time, drove down the field, killed the remaining time on the game clock and Carlson kicked his fifth game-winning field goal of the season.

All five game-winning field goals for Carlson have been as the time on the game clock expired.

With the Raiders clinching a playoff spot, they will be meeting the Cincinnati Bengals in the first round. These teams met in the regular season, with the Bengals coming away with a 32-13 victory in Las Vegas.