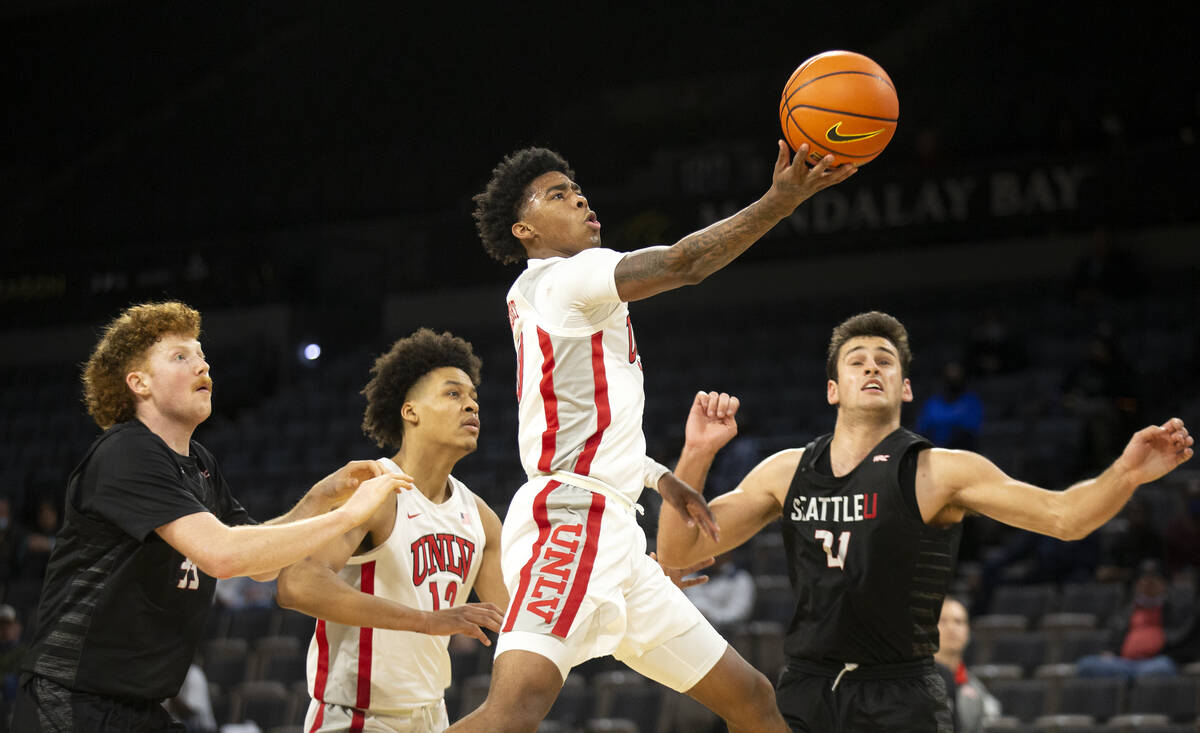 The UNLV Runnin’ Rebels ended their 3-game losing streak with a 76-56 victory over Seattle University on Wednesday night at the Michelob Ultra Arena in Las Vegas.

After falling behind 8-0 in the first two minutes, it looked like UNLV was going to be in for another long night. However, the Rebels went on a 13-0 run to take the lead and never looked back.

After coming off the bench in the last game for the Rebels, guard Bryce Hamilton was re-inserted back into the starting lineup.

Hamilton made eight of his nine shot attempts to finish with 18 points. He added five rebounds and three assists to his performance.

Senior guard Michael Nuga, a transfer from Kent State, finished with a season-high 21 points on 8 of 13 shooting. He also made a game-high five 3-point shots. Nuga added eight assists and five rebounds.

Royce Hamm Jr. bounced back from his lowest rebounding game of the season his last time out. He had 14 rebounds for the Runnin’ Rebels against the Seattle Redhawks, including a team-high three offensive rebounds.

After jumping out to an eleven-point lead in the first half, the Runnin’ Rebels had their lead cut down to just six points heading into the locker room at halftime.

The second half was all UNLV. They held Seattle to just 31% shooting from the floor, while UNLV made 54% of their shots in the second half. With the combination of good shooting and a good defensive effort, the Rebels outscored the Redhawks 26-40.

Seattle was led by sophomore guard Cameron Tyson. Tyson finished with a team-high 14 points for the Redhawks’ offense.

Freshman guard Kobe Williamson chipped in with 13 points of his own coming off the bench. He also had a team-high ten rebounds, four of which came in the offensive zone.

The Runnin’ Rebels will be back at the Michelob Ultra Arena in Mandalay Bay this Saturday, Dec. 11, when they play host to the Hartford Hawks. The Hawks are coming off their first win of the season over St. Francis (BKN).

Tipoff for the game is scheduled for 12 p.m.